With 100 days to go to crucial UN crisis summit in Glasgow, PM is accused of lack of leadership

Protesters will fill London’s Parliament Square on Friday morning, calling on the prime minister, Boris Johnson, to make the climate crisis his top priority, as the UK prepares to host UN talks that will determine whether the world tips into environmental catastrophe this decade.

Giant alarm clocks will show time running out, while 100 protesters chant that Johnson and his chancellor, Rishi Sunak, are “missing in action” on the climate crisis.

Saturday marks 100 days to the Cop26 summit, vital UN climate talks that open on 1 November in Glasgow. Scores of world leaders will fly in for the start, and officials from 196 countries will spend two weeks in high-pressure negotiations aimed at setting a new path to a safer climate.

Floods across Europe and China, wildfires in the US, killer heatwaves stretching into northern latitudes and extreme weather across the planet give a glimpse into what is at stake. Scientists warn that unless global greenhouse gas emissions are halved in the next decade, temperatures will rise by more than 1.5C and the extreme heat, droughts and floods seen in recent weeks will rapidly become the norm rather than the exception, with devastating consequences.

John Kerry, the special envoy for climate to the US president, Joe Biden, warned in a landmark speech at Kew Gardens this week: “Cop26 in Glasgow [is] a pivotal moment for the world to come together to meet and master the climate challenge … in little more than 100 days, we can save the next hundred years.”

Alok Sharma, the UK minister who will serve as president of the summit, said: “Cop26 is our last best hope of avoiding the worst effects of climate change, and we cannot afford to fail. Over the next 100 days, we need all governments to accelerate the green transition, so that we leave Glasgow with a clear plan to limit global warming to 1.5C. This will set the course of this decisive decade for our planet and future generations.”

But as Sharma prepares for a key meeting of world ministers this weekend, and as the US steps up its diplomacy before Cop26, climate experts and veterans of the UN talks told the Guardian that Johnson was failing to take the reins, both internationally and at home. 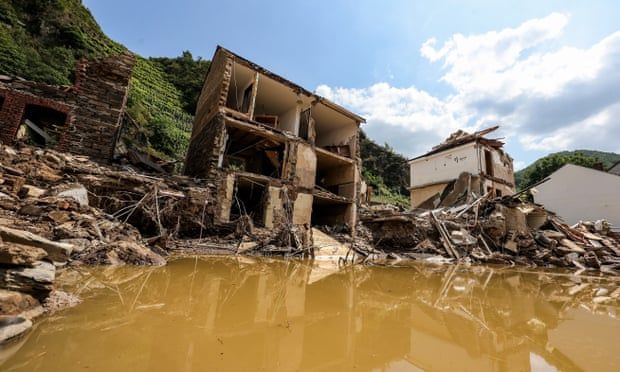 The aftermath of flooding on the Ahr River, in the district of Ahrweiler, Germany, after extreme weather this month.

“We ask ourselves every day – where is the prime minister?” said Chris Venables of the Green Alliance thinktank. “It’s clear that he has not grasped the scale of holding the biggest diplomatic event on UK soil since the second world war. This should be his No 1 priority.”

Johnson should be cajoling and pushing heads of government around the world to forge a deal at Glasgow, but has yet to make a real mark, added Bernice Lee, a research director at the Chatham House thinktank. “This is mission-critical – we need another round of leader-level diplomacy from Johnson.”

No government ministers were at Kew to hear Kerry’s policy intervention, in which he called on China, the world’s biggest emitter, to join the US in taking stronger climate action. Ed Miliband, Labour’s shadow business secretary, who attended UN climate talks as environment secretary under Gordon Brown, was in the audience.

“Cop26 is in the balance,” he told the Guardian. “The prime minister’s leadership is lacking, despite the best efforts of Alok Sharma. And we need to see much more from Rishi Sunak and [the foreign secretary] Dominic Raab. Of course, Covid-19 is going to be vital, but this should absolutely be the government’s top priority.” 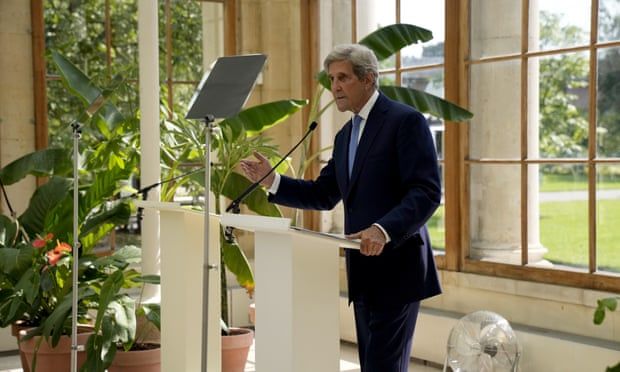 The US special presidential envoy for climate, John Kerry, gives a speech at Kew, London, on 20 July.

One of the big achievements of the UK presidency is to keep the Cop26 talks focused on limiting global heating to 1.5C above pre-industrial temperatures. The Paris agreement of 2015 set out two key goals: one firm commitment to holding temperature rises to “well below 2C” and another aspirational goal of staying within the 1.5C threshold.

That compromise was forged because some big industrialised economies, chiefly China and India, were reluctant to agree to anything less than 2C, wary of putting limits on their economic growth, while small islands and low-lying states such as the Marshall Islands and Bangladesh feared they would be overwhelmed by sea level rises if temperatures exceeded 1.5C.

Since then, however, a report in 2018 by the Intergovernmental Panel on Climate Change, the world authority on climate science, found that going beyond 1.5C would be dangerous, leading to the bleaching of coral reefs, an increase in extreme weather, and widespread damage to the natural world. Many experts worry that we will overshoot 1.5C, but argue that keeping it as a goal is vital to ensure we limit the damage as far as possible.

Kerry made it clear that he sees 1.5C as the goal, and under the UK’s presidency, the G7 also agreed to target the lower limit. Kerry said: “There is still time to put a safer 1.5C future back within reach. But only if every major economy commits to meaningful reductions by 2030.”

Setting a strong target for the summit is just one step, however: ensuring a concrete programme of action comes out of Cop26 must be the main goal. Veterans of the UN talks warn that several key elements are still missing. 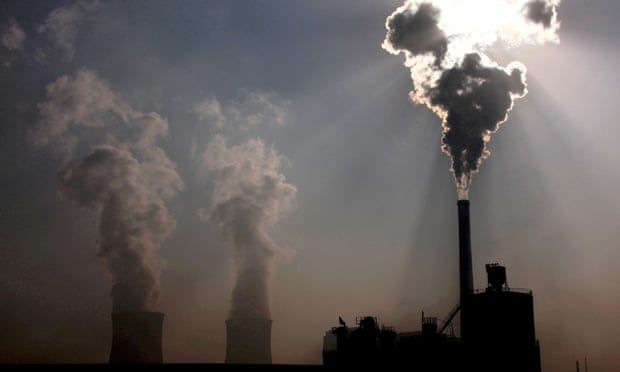 A coal-burning power plant behind a factory in China’s Inner Mongolia autonomous region.

The first is emissions-cutting targets for the next 10 years. National plans on emissions cuts, called nationally determined contributions or NDCs, are the bedrock of the Paris climate agreement. But the plans submitted so far to the UN would mean temperatures rising by more than 2C.

China, the world’s biggest emitter, has yet to submit an NDC. Kerry said the US wanted to work with China on a way forward. “America needs China to succeed in slashing emissions. China needs America to do the same. The best opportunity we have to secure a reasonable climate future is for China and the United States to work together. And the best way to do so is to lay out specific, ambitious, near-term reduction goals, and back them up with serious policy.”

Another big issue for Cop26 is funding. Developing countries were promised they would receive $100bn a year by 2020 in climate finance, to help them cut emissions and cope with the impacts of climate breakdown. That target has not yet been met, and failing to meet it is eroding trust among developing countries.

“The US is not pulling its weight – it’s the only country holding up the $100bn pledge,” said John Sauven, the executive director of Greenpeace UK. “If the US does not put its hands in its pockets and make up the shortfall, Glasgow will be in jeopardy.”

Kerry told the Guardian in response that the Biden administration was “working hard” on finding more financial assistance for poor countries. “It’s very important that the US should provide finance. Our internal process on this is not complete yet.” 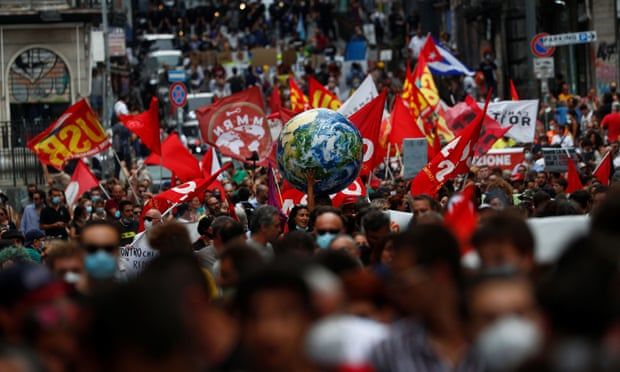 He added: “We are very conscious of the sensitivities around this. The US obviously plays a key role, and our absence in the last four years [from climate action] heightens that sense of responsibility and the imperative to find a way.”

Cop26 diplomacy is intensifying. Ministers from the G20 countries are meeting on Thursday and Friday in Naples to discuss climate action, and on Sunday and Monday ministers from 40 countries will be gathered by Sharma to discuss Cop26.

While ministers meet to hammer out details, the warnings are growing louder. The International Energy Agency forecast this week that the world’s annual carbon output would reach record levels in 2023, on current trends, because governments are failing to pursue green energy. Emissions at that level would put the 1.5C goal all but out of reach.

Next month, the IPCC is expected to come out with the first part of a new scientific assessment warning that our emissions could already be triggering tipping points in the climate system that could make global heating irreversible. That makes staying within 1.5C even more critical.

Rachel Kyte, the dean of the Fletcher School at Tufts University in the US, and a former high-ranking World Bank official at the UN talks, said the UK government, and Boris Johnson, must step up urgently. “We’re into extra time, and with 100 days to go we’re not – by any means – where we would want to be in the negotiating process,” she said. “The minimum we need to see now is some aggressive diplomacy around the world for big emitters to come up with much bolder action.”