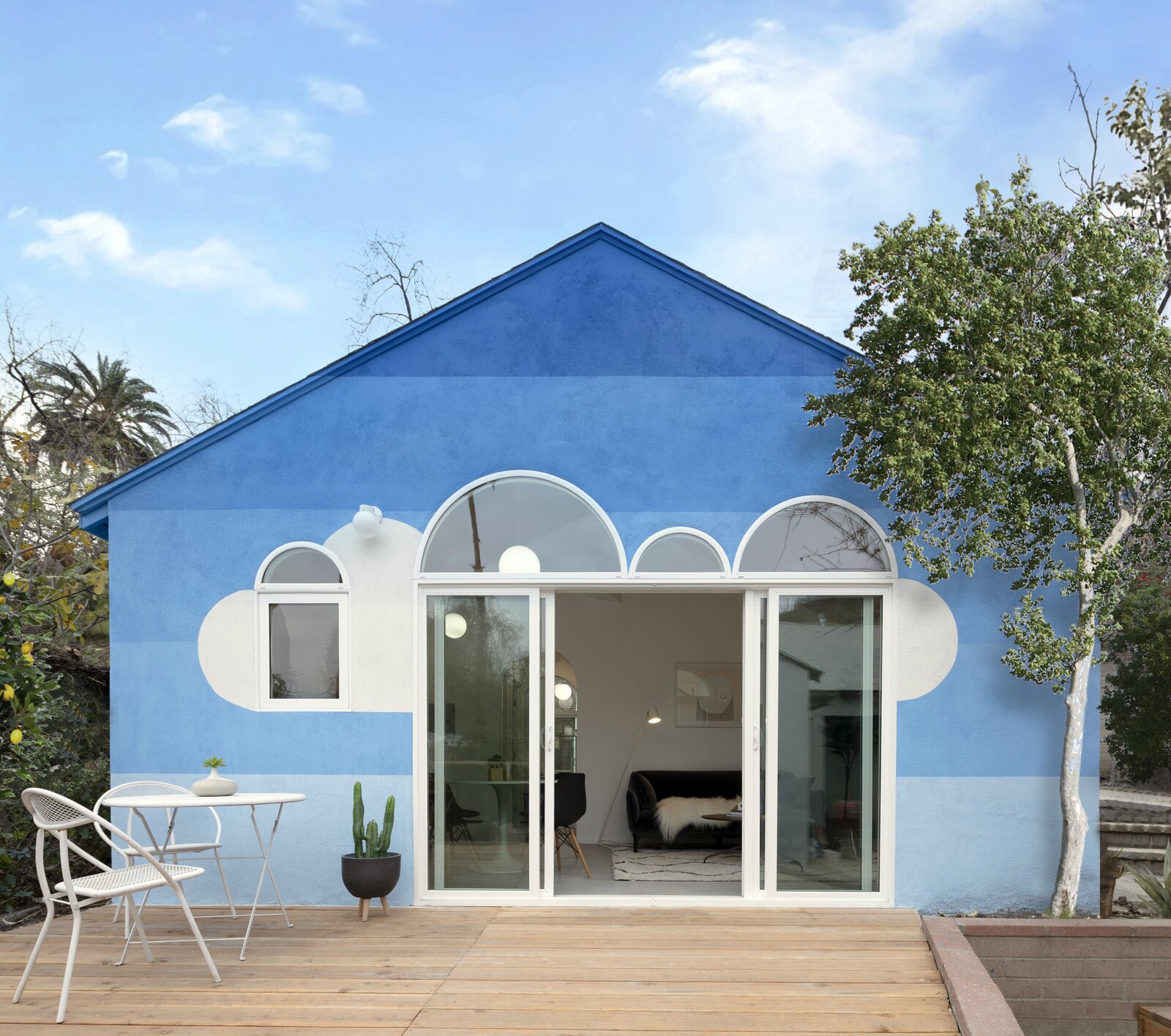 Located on a quiet street in Los Angeles’s El Sereno neighborhood, the Cloud Dream House is a 400-square-foot garage–turned–residence that architectural designer Ben Warwas, founder of local design studio Byben, was commissioned to upgrade by developer William Tong. "We originally found this property for a client, but when they landed up buying something else, our renovation company purchased it," Tong says. Once the renovation of the existing front house was complete, Tong turned his attention to the garage, tasking Warwas with converting it into an accessory dwelling unit. 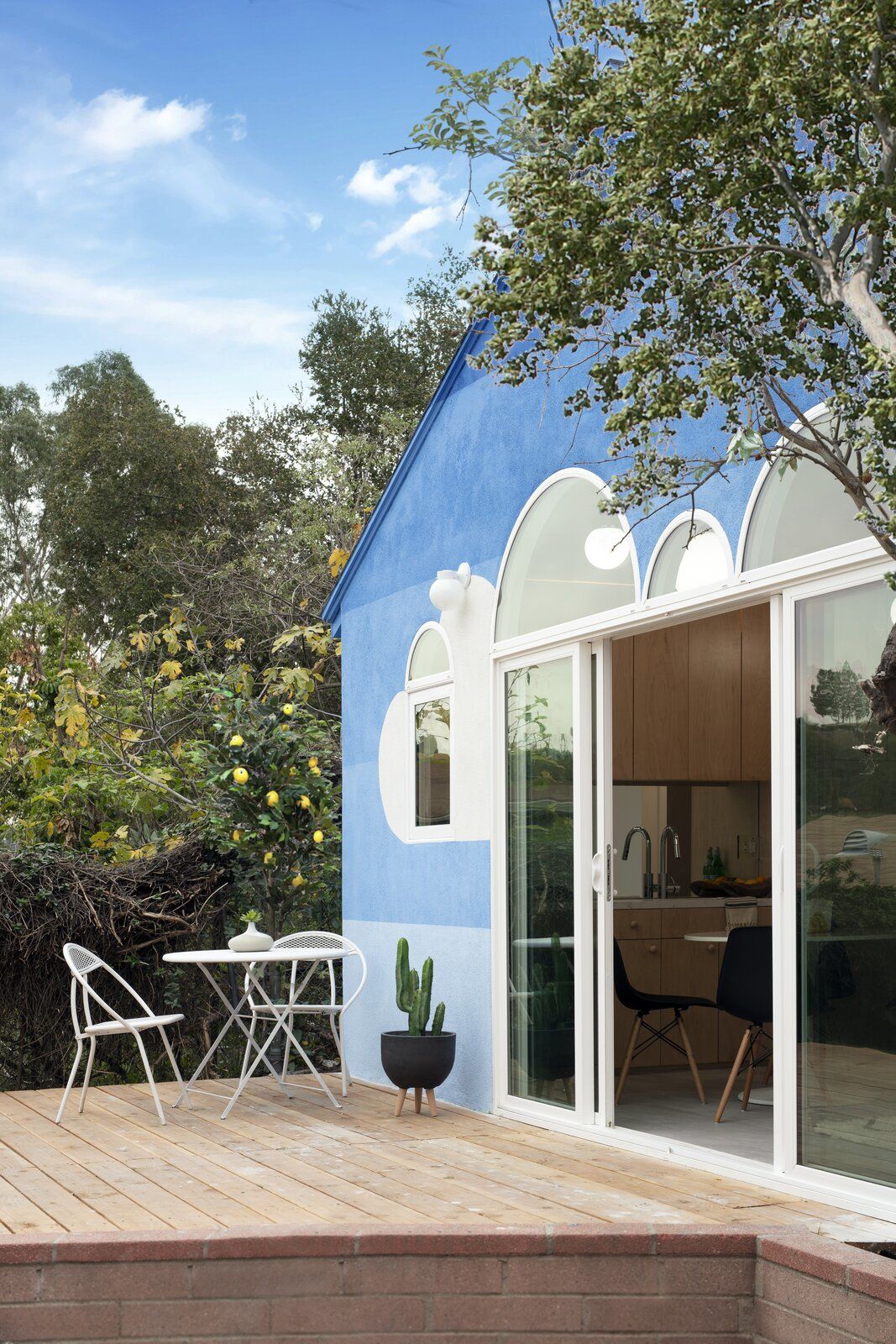 "The garage, a typical 20-by-20-square-foot pitched roof enclosure, is the kind of structure you see all over L.A.," says Warwas. "[It] actually offers a very functional shell for the creation of a small home." Thanks to California’s ADU laws, which prevent cities across the state from imposing significant restrictions on their ADU codes, Warwas and his team "sailed right through the planning process," he says.

"No planning approval was required-it’s easy if there is an existing structure," Warwas continues. However, the architectural designer was required to upgrade the original structure’s insulation to code in order to make it habitable, he says. 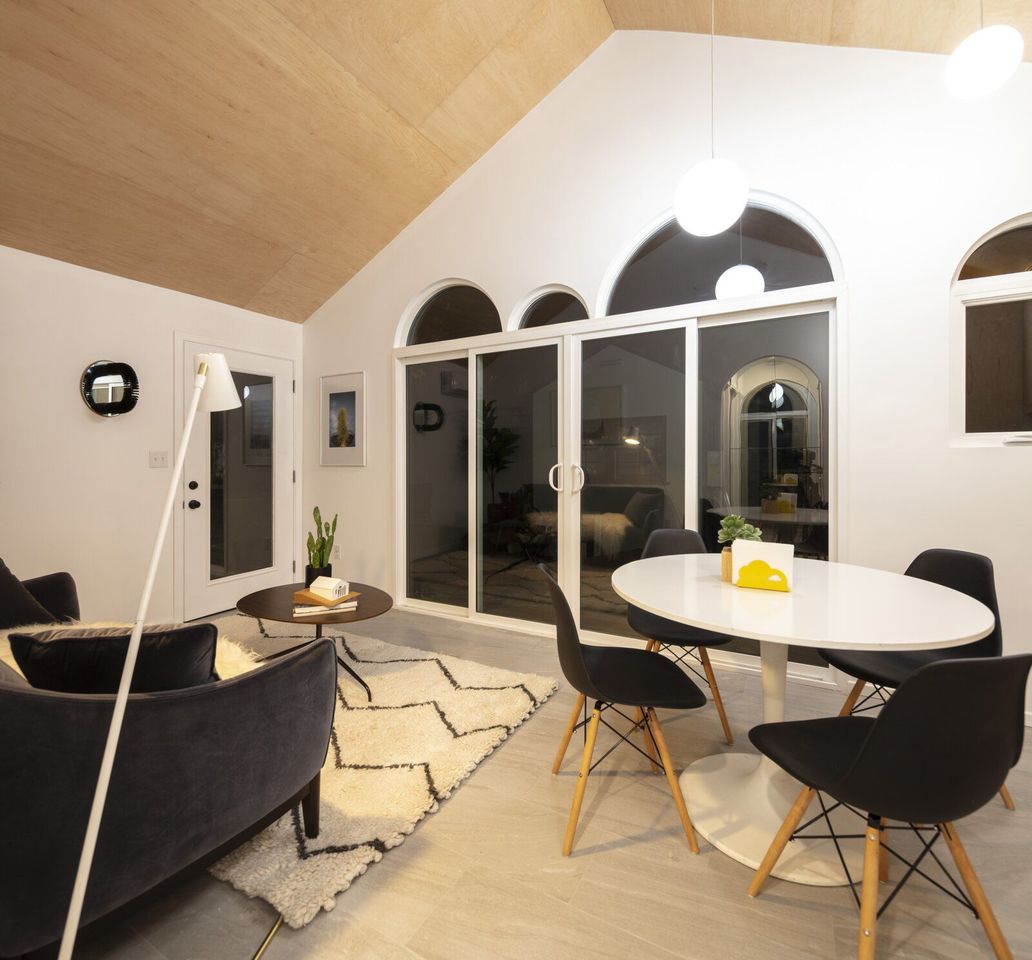 Semicircular windows above the glazed sliding doors at the entrance create a "cloud-like" effect.

The layout of the Cloud Dream Home is fairly straightforward, with the primary gathering spaces located toward the front and the private domain at the rear. The bifurcation of the space means that the living area opens up onto the newly added deck, which benefits from "great California weather," Warwas says. "By adding the external deck, we made the relatively small interior space really functional," he adds. 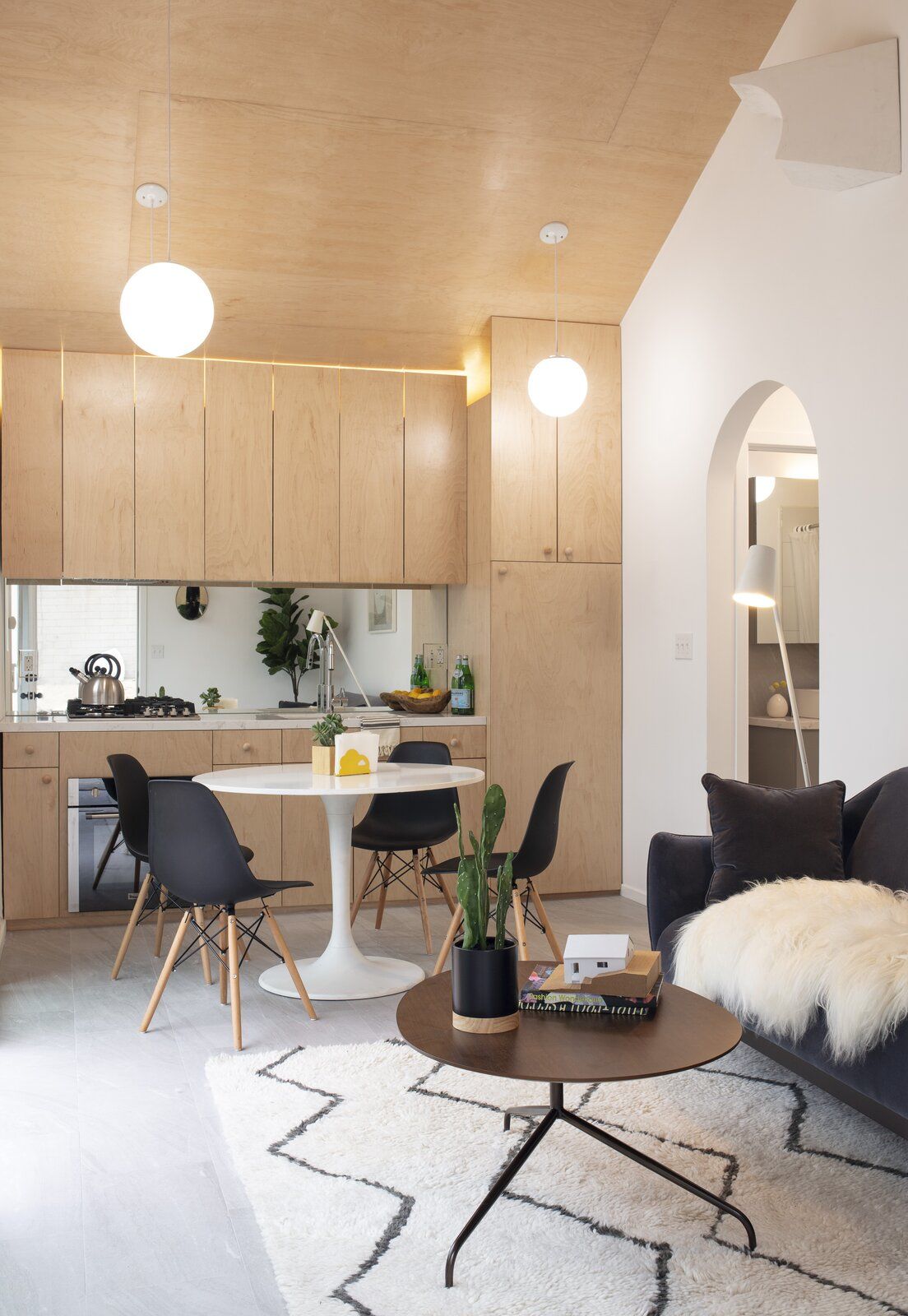 In the kitchen, the concealed refrigerator matches the bespoke plywood cabinetry, while mirror backsplash creates the illusion of more interior space.

To stay within the project’s tight budget constraints, Warwas kept the interior simple, using thoughtful design techniques to create the illusion of more space. The ceiling is now lined with clear pine plywood that matches the bespoke kitchen cabinetry and concealed refrigerator. Warwas also integrated mirror backsplash in the kitchen and bathroom, which visually expands the rooms. Light is drawn into the main living areas through the glazed windows and doors at the front of the home. "I actually enjoyed [working around] the space and budget constraints," Warwas says. 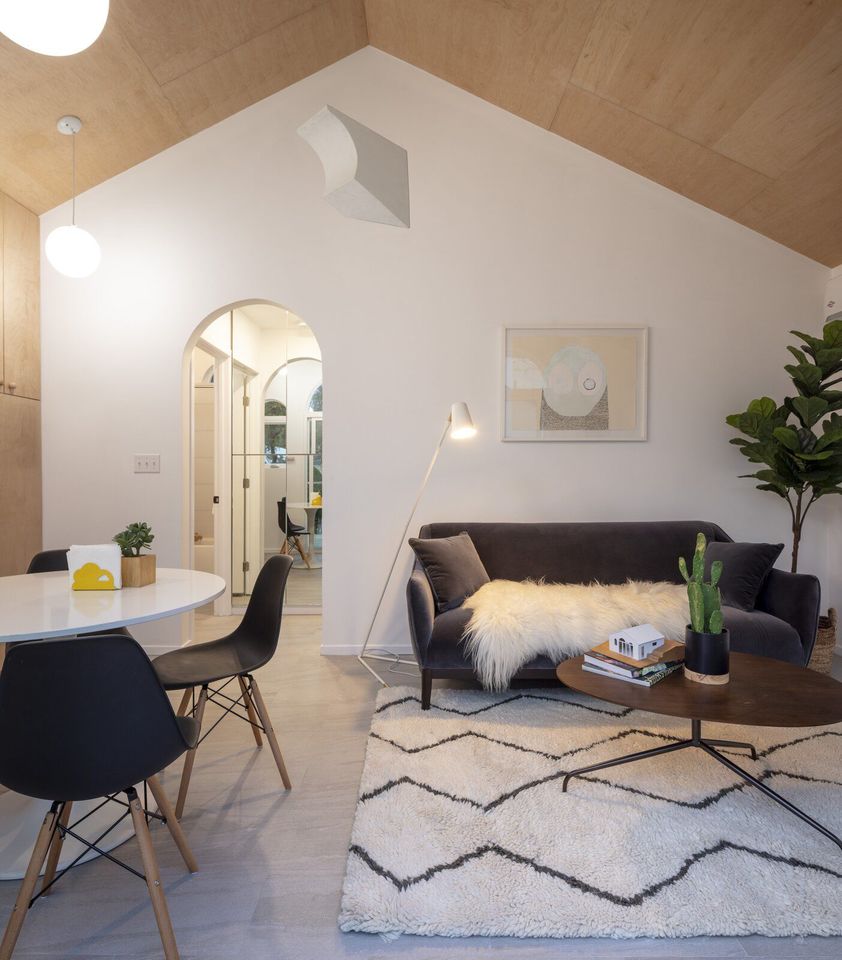 Warwas lowered the ceiling between the gathering areas and the rear sleeping "wing" to create a sense of drama and separation between the public and private spaces. 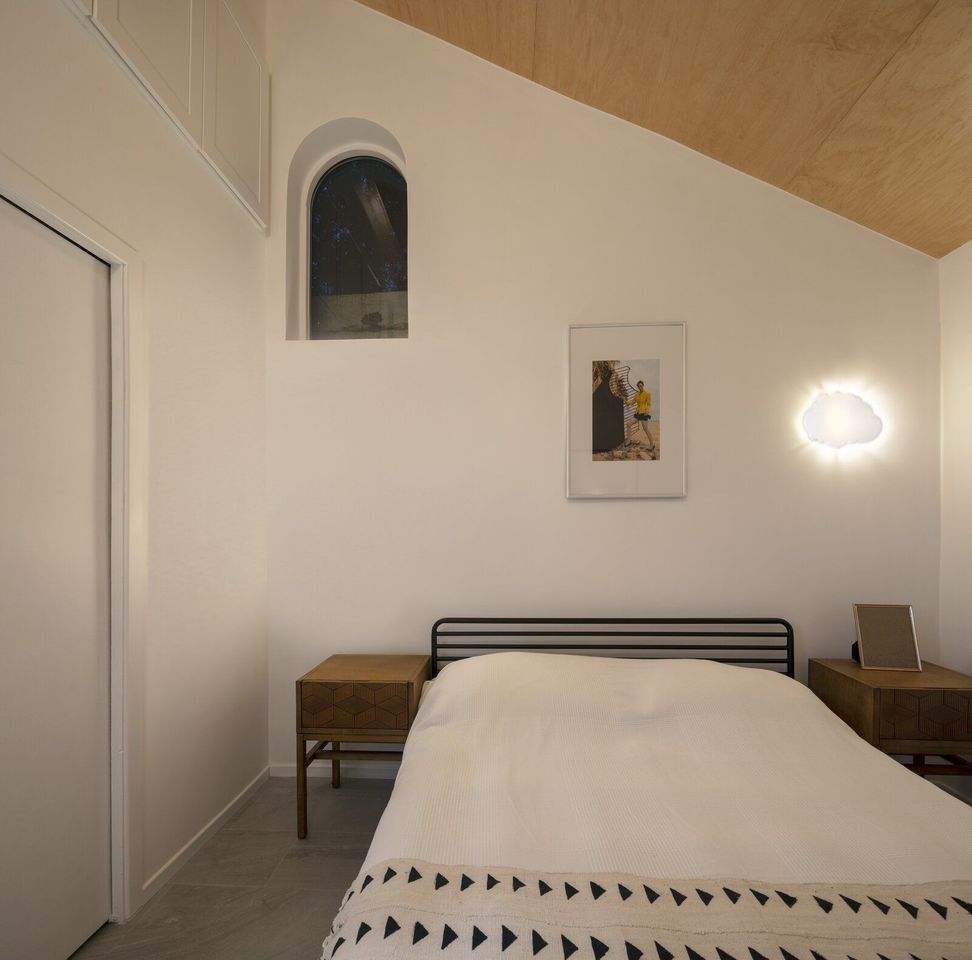 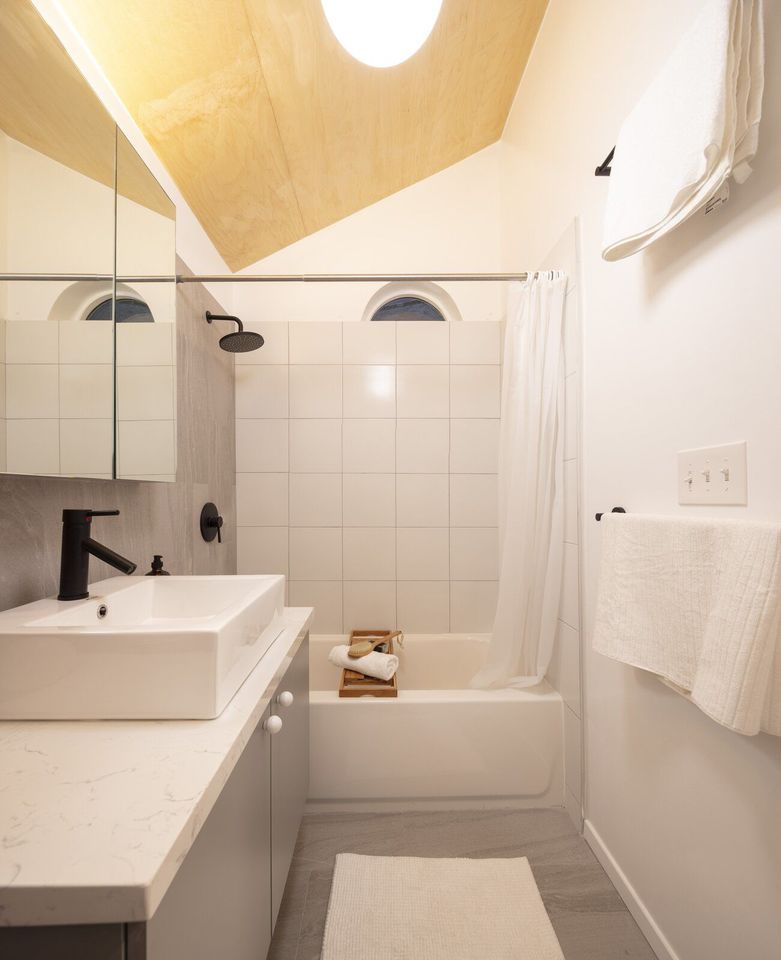 The bedroom and bathroom are located at the rear of the home.

While the existing roofline was maintained, the architectural designer lowered the ceiling between the living room and sleeping "wing" to create a sense of drama. "It’s a classic Frank Lloyd Wright technique, whereby the space you enter is somewhat constricted but opens up as you move through [it]," Warwas says. 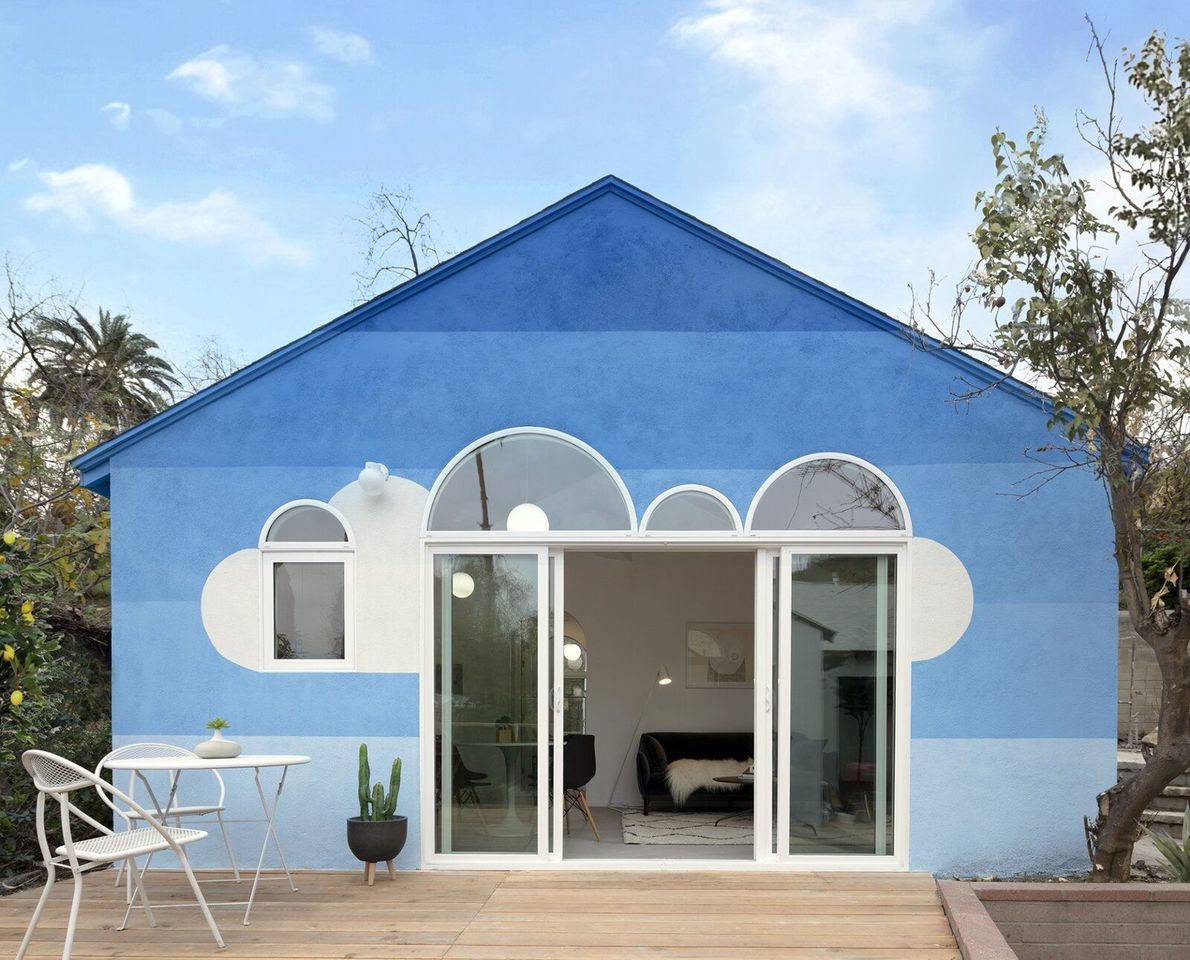 But the biggest spectacle is the blue-painted exterior, which features semicircular windows above the entry that create "cloud-like doors," Warwas says. "I was looking at using affordable vinyl doors and noticed there were moon-shaped options," he explains. "It led me to this idea that the exterior of the house represents the big Los Angeles sky, and as you walk in, you’re literally walking toward the direction of the sunset." 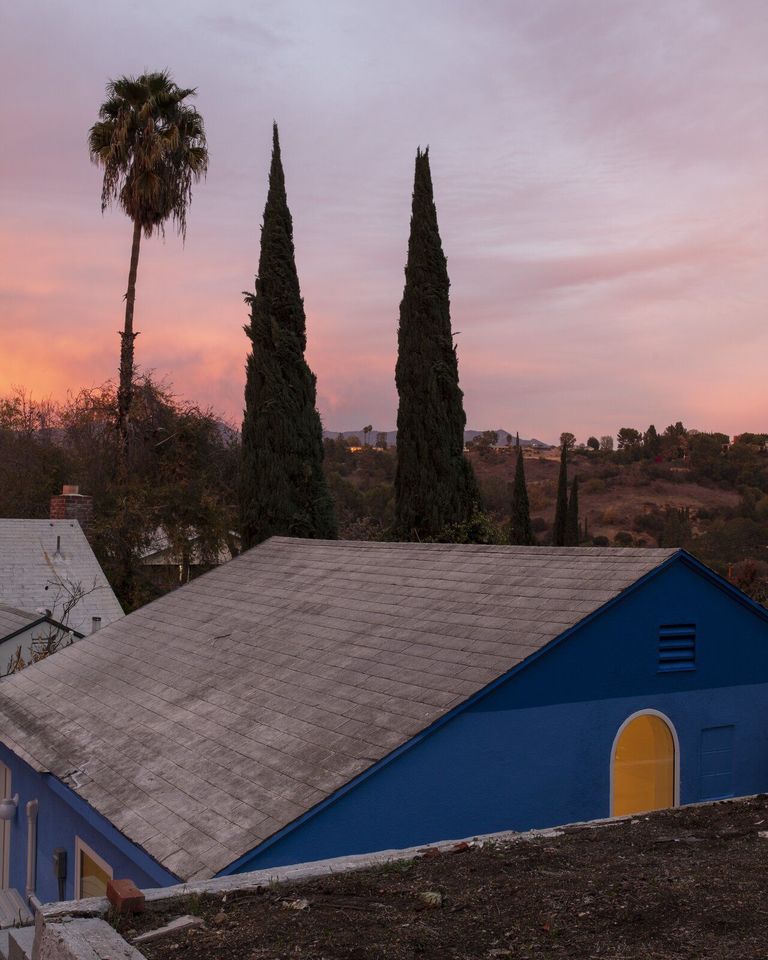 "I try to add an element of whimsy in my projects," Warwas adds.