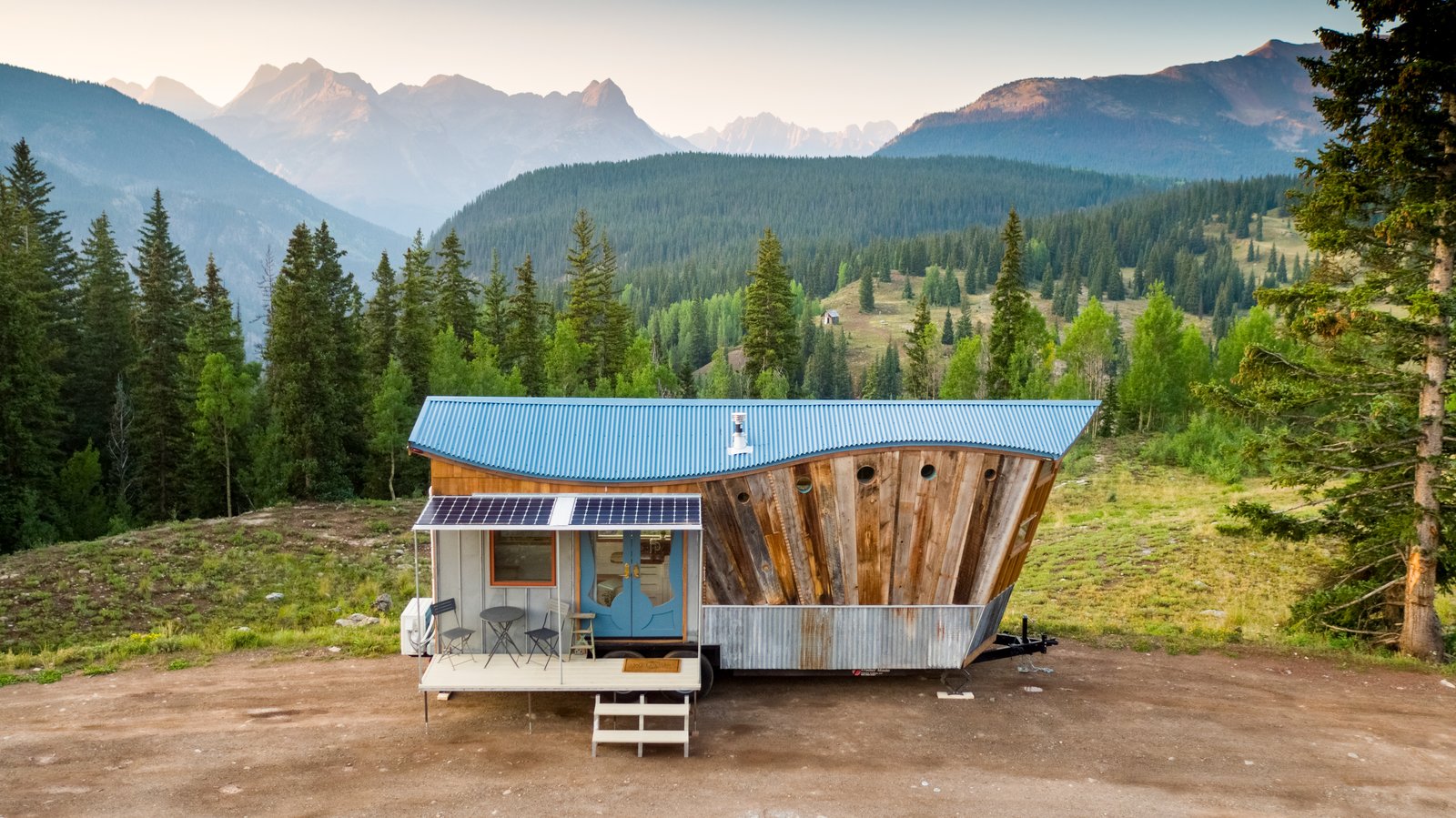 The duo behind Rocky Mountain Tiny Houses design their own winsome home to pay tribute to San Juan Mountains of Colorado.

For their own residence in the San Juan Mountains of Durango, Colorado, Greg and Stephanie Parham-the owners of Rocky Mountain Tiny Houses-have crafted an eye-catching tiny home that’s packed with functional features including an elevator bed, a folding deck, and an awning made of solar panels. Above all, the design elements pay tribute to the spectacular surroundings. 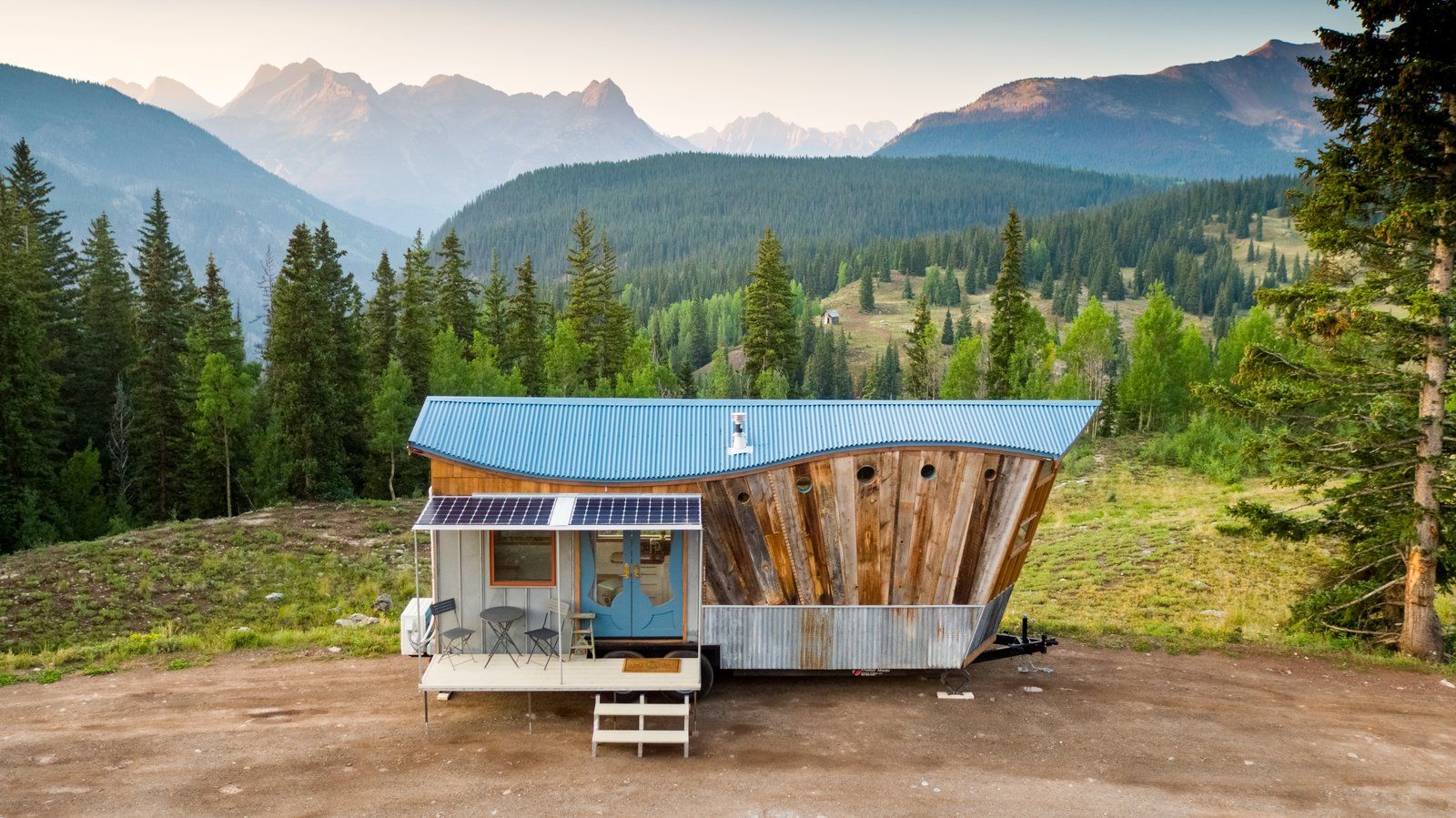 The exterior shape, which echoes that of a covered wagon, is a riff on a whimsical design that the Parhams have previously created for clients. It also employs some tricks that maximize the home's tiny footprint.

The design and build of their own dwelling presented the Parhams with the opportunity to indulge in some ideas that they aren’t always able to explore with clients.

"It is more ‘organic’ than our other builds," says Greg. "When we build houses for other people, they are normally on a tight budget and timeline, and this dictates a lot of design decisions. For this build, since we were doing all the work and didn’t have to pay for man hours, we committed to making something a little more eye-catching and beautiful than normal." Additionally, since they didn't have a hard deadline, it became a chance for Greg to experiment with some ideas and brush up on some woodworking skills. 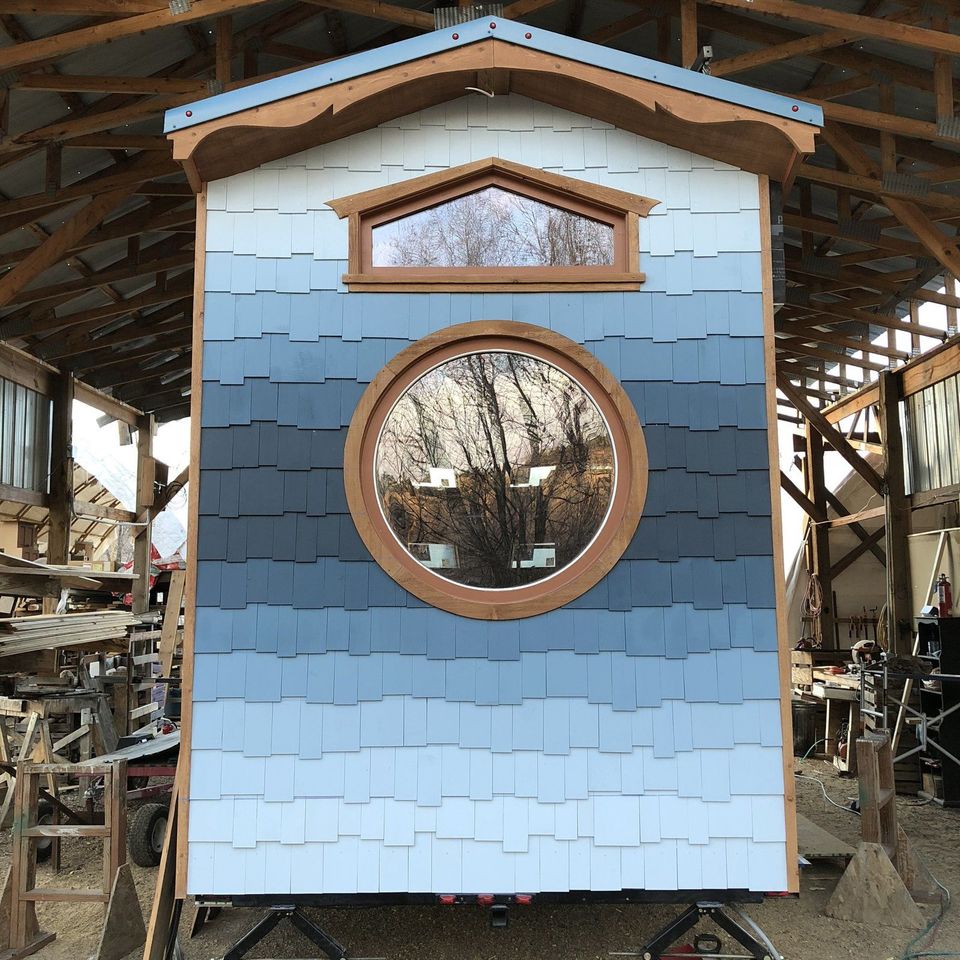 The San Juan Mountains and the environment inspired many design elements of the aptly named San Juan Tiny House. The undulating roof line, for example, recalls a flowing river, while the blue gradient on the back wall recreates the shifting blues of the Colorado sky. "The sun-ray pattern pays homage to the Colorado sun-we have 300+ days of sunshine per year-and the portholes mimic the stars in the desert sky," says Greg.

The Parhams used reclaimed wood for their build, finding various resources on Craigslist ("mostly people taking down old fences or sheds," notes Greg) and scoring the antique porthole windows on eBay. The hardwood flooring was milled from local barn beams, and the loft beams were pulled from a house that was being demolished. They sourced their light fixtures and hardware at antique stores. 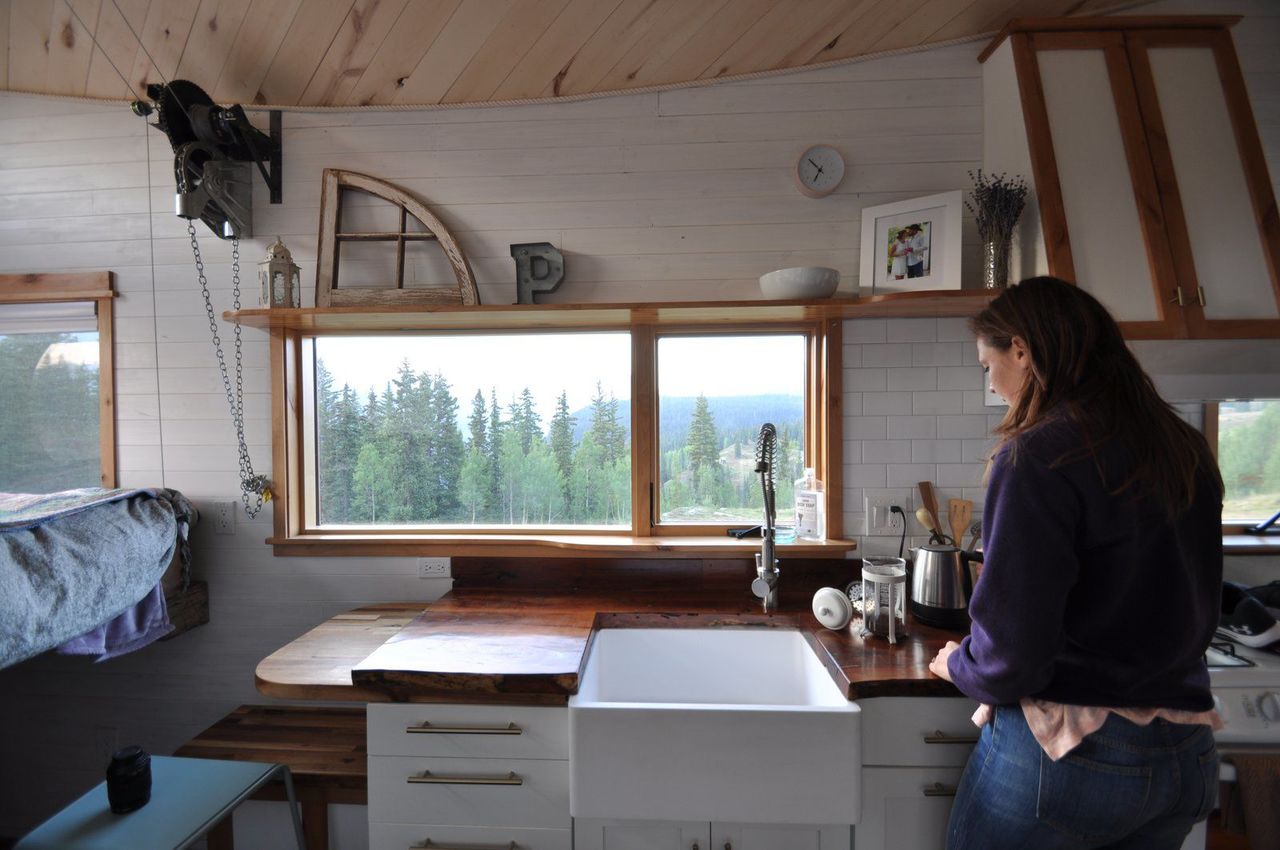 The kitchen is designed to be both compact and functional. 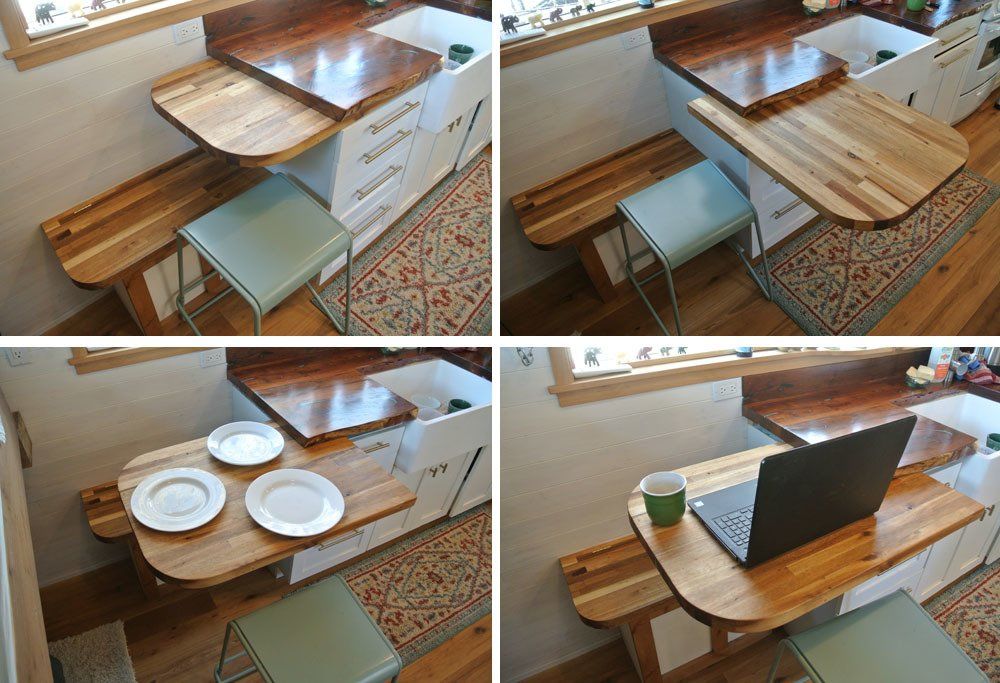 The Parhams added a convertible table that slides out to extend the kitchen and can be used for added prep space, dining, or as an office nook. 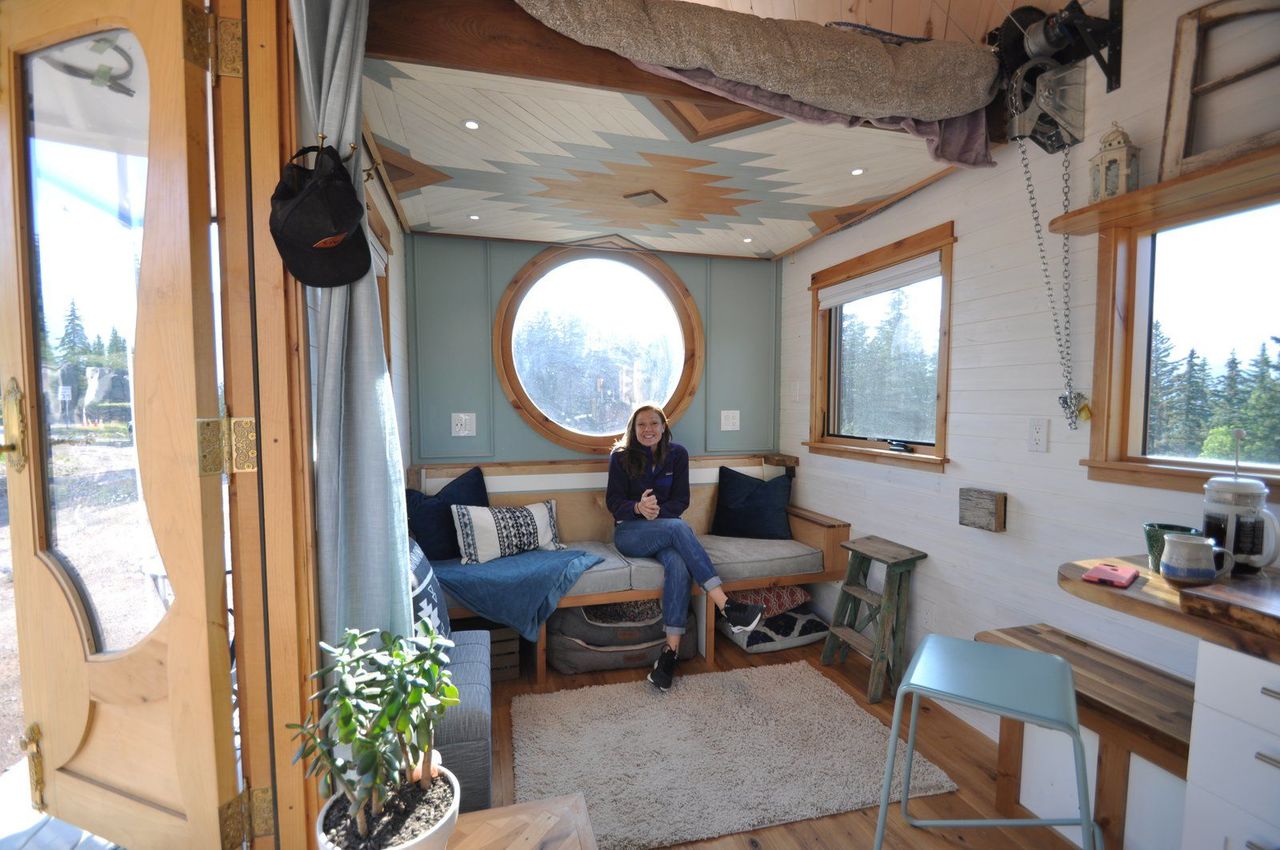 The living area is under the sleeping loft, which is actually an elevator bed. Note the pulley on the right side. 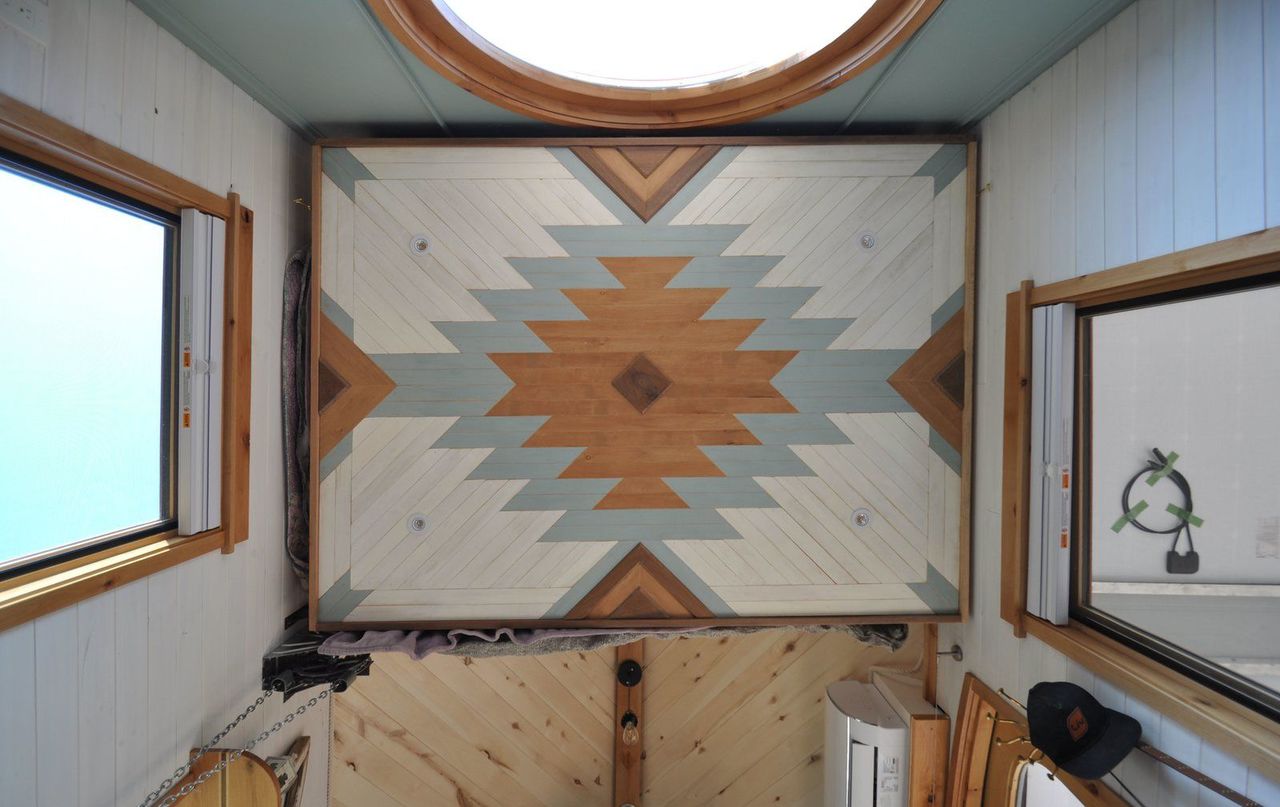 The bottom of the bed features a Southwest-inspired pattern that the Parhams designed together. "We wanted to have something beautiful to look at while sitting on the couch if the bed was raised up," says Greg.

The clever use of an elevator bed allows for a more comfortable sleeping space.

"Elevator beds are all the rage in the tiny house world!" says Greg. "They are a design tool that allows you to have a downstairs sleeping arrangement without lengthening your trailer another six to eight feet. Trailer length is the primary factor in cost, so keeping the trailer shorter will save lots of money, and make the house easier to tow."

However, an elevator bed adds a layer of complexity, since the space beneath needs to be clear for lowering. Says Greg, "Most people opt for a motorized mechanism, but I wanted ours to be manually operated, both for the novelty and in case we were boondocked somewhere and didn't have power. The house has an off-grid solar system, but even these can fail during a three-day snowstorm." 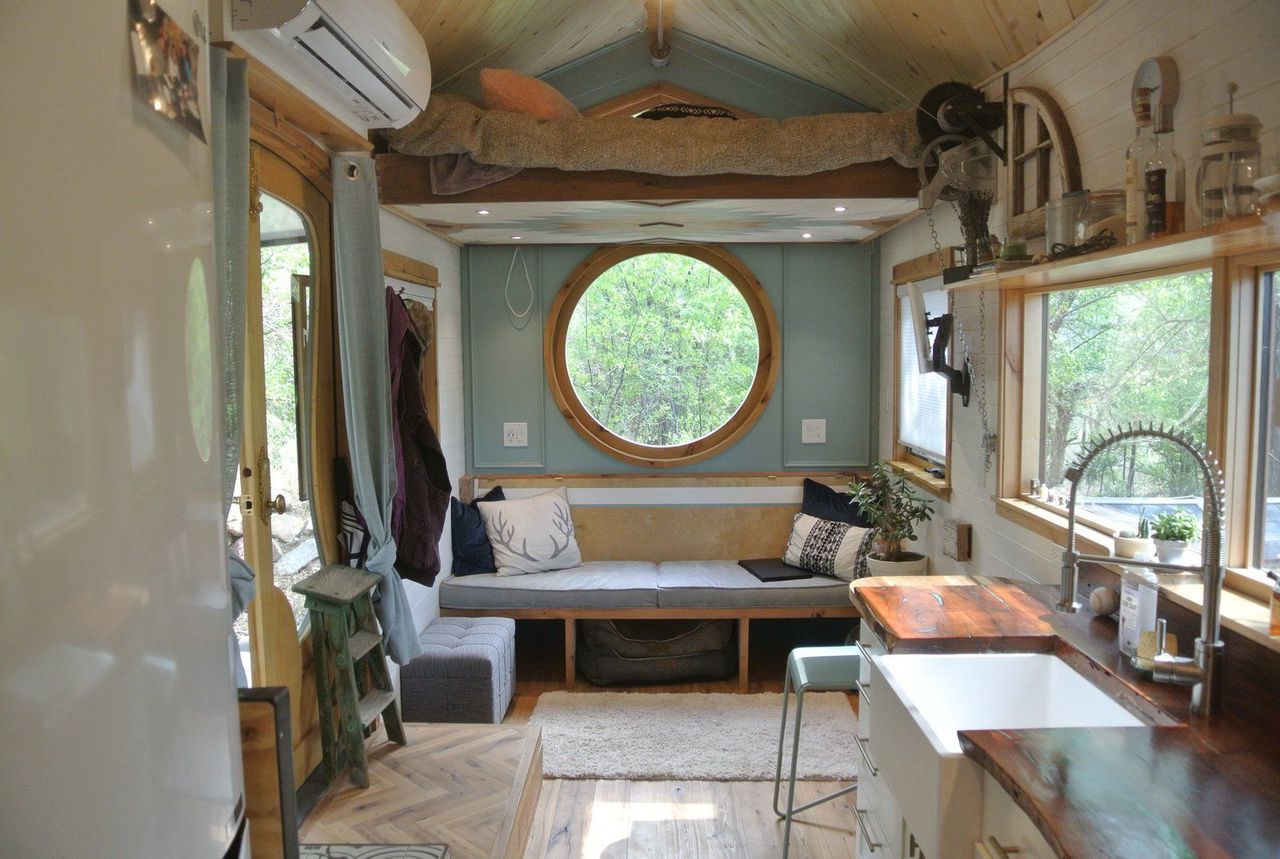 The living room area enjoys a porthole opening to the outdoors. 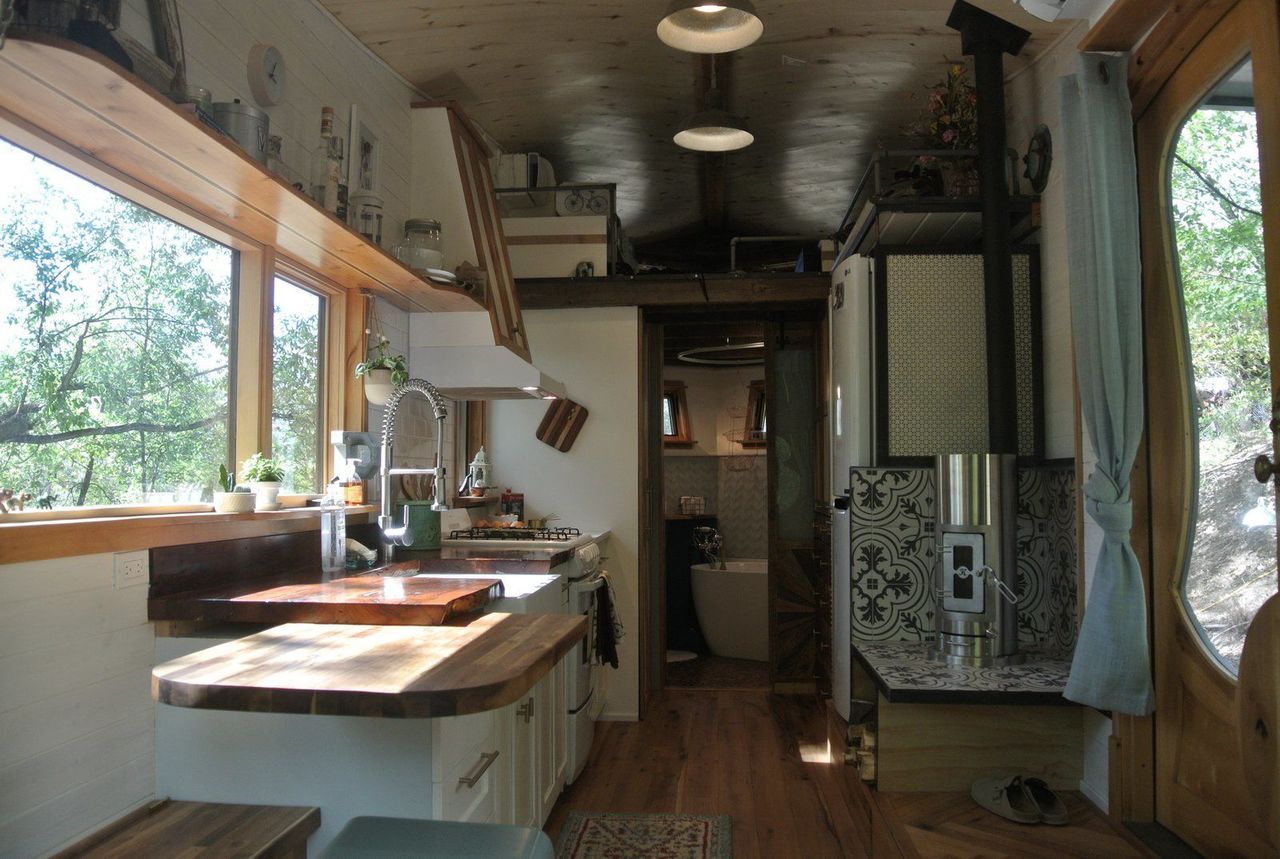 The Kimberley woodstove is designed specifically for tiny houses and very small spaces. 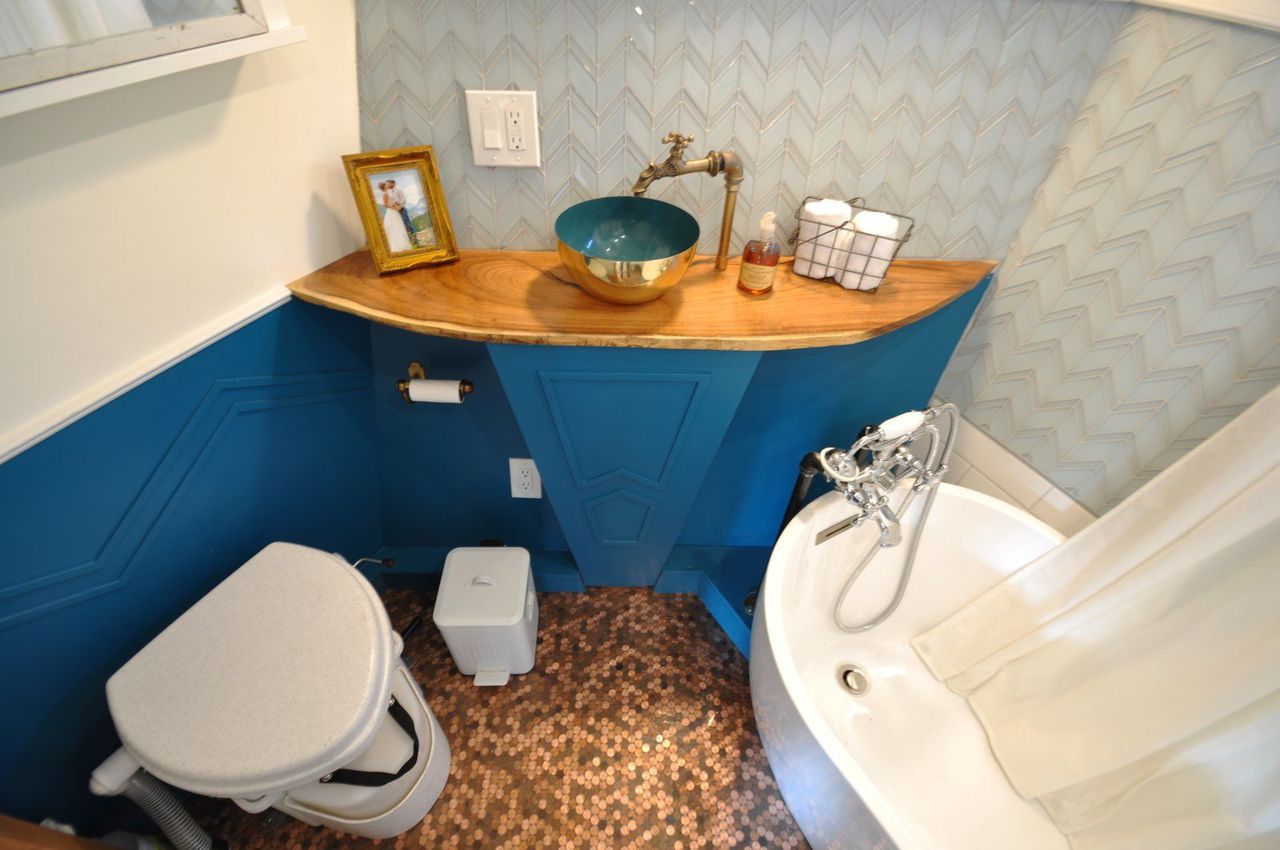 The bathroom, which features a penny-tile floor, is relatively large-and even holds a soaking tub. 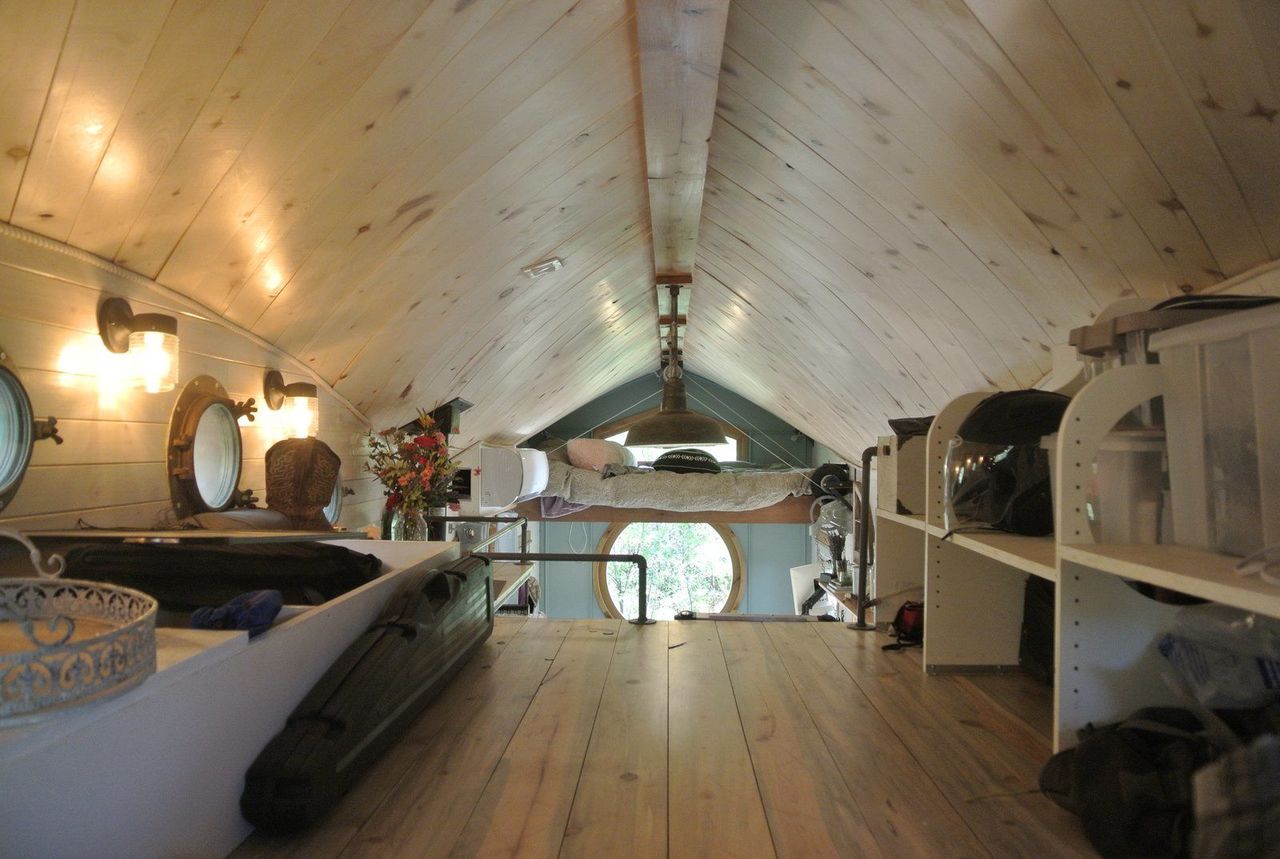 The storage loft looks towards the elevator bed. 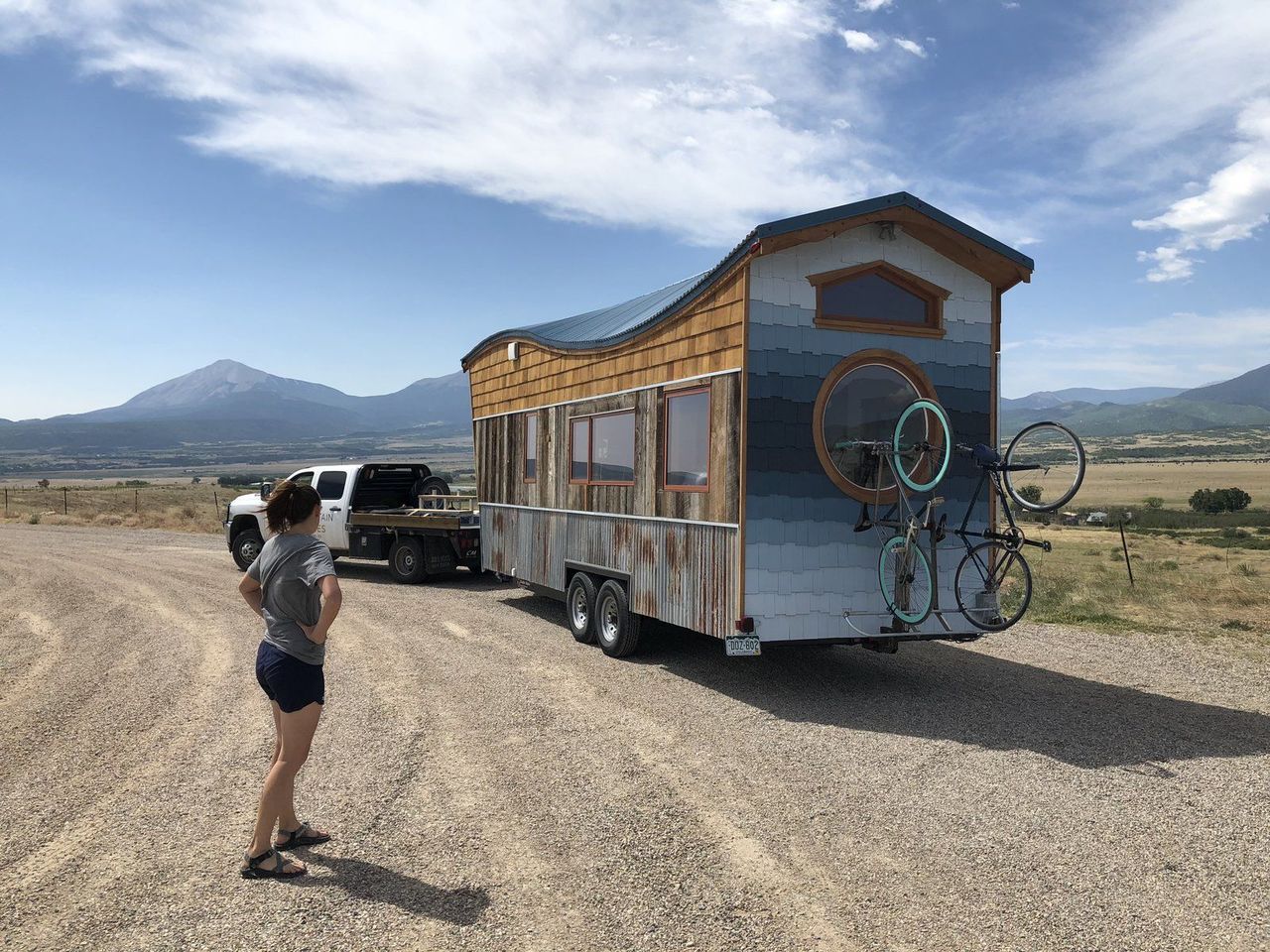 Completed in the summer of 2017, San Juan Tiny House has since been shown at four tiny house festivals in Omaha, Denver, Colorado Springs, and Austin. 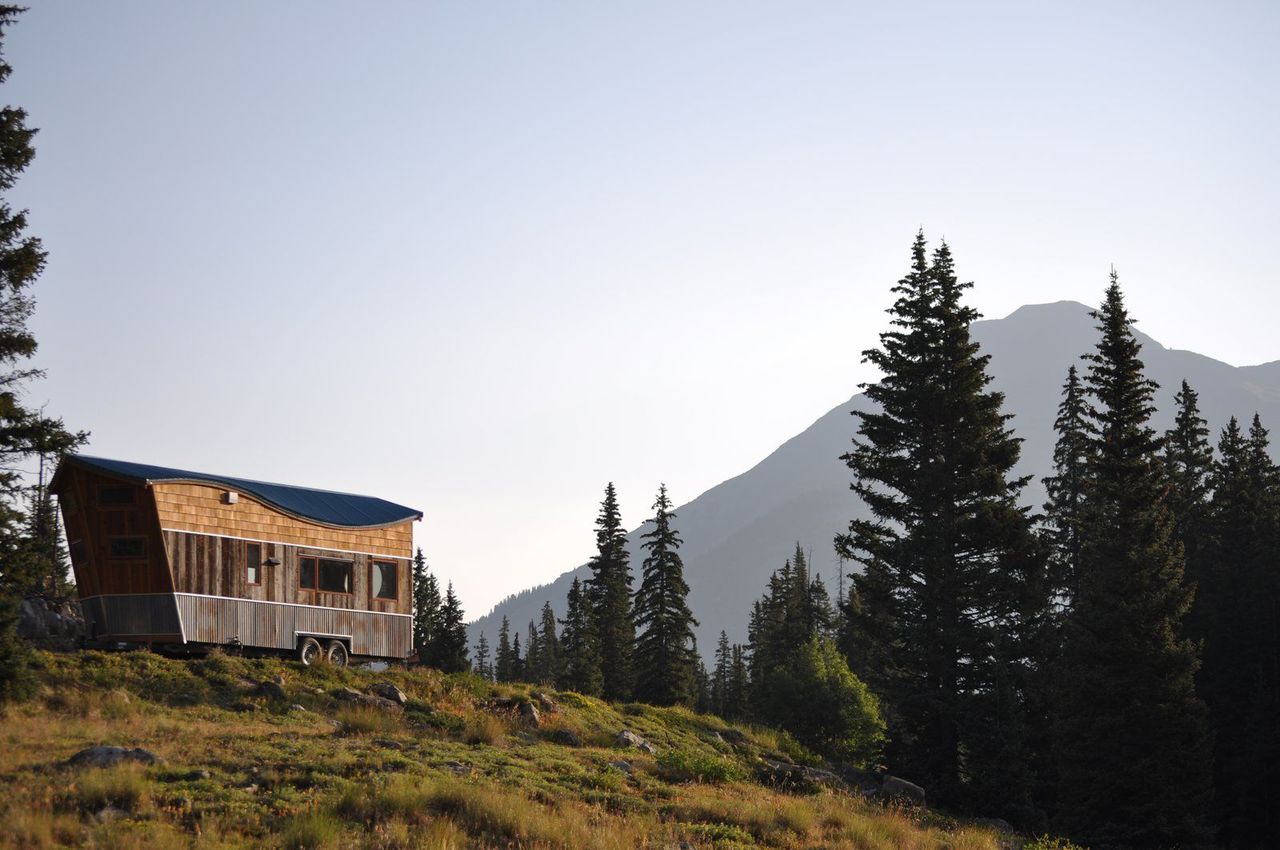