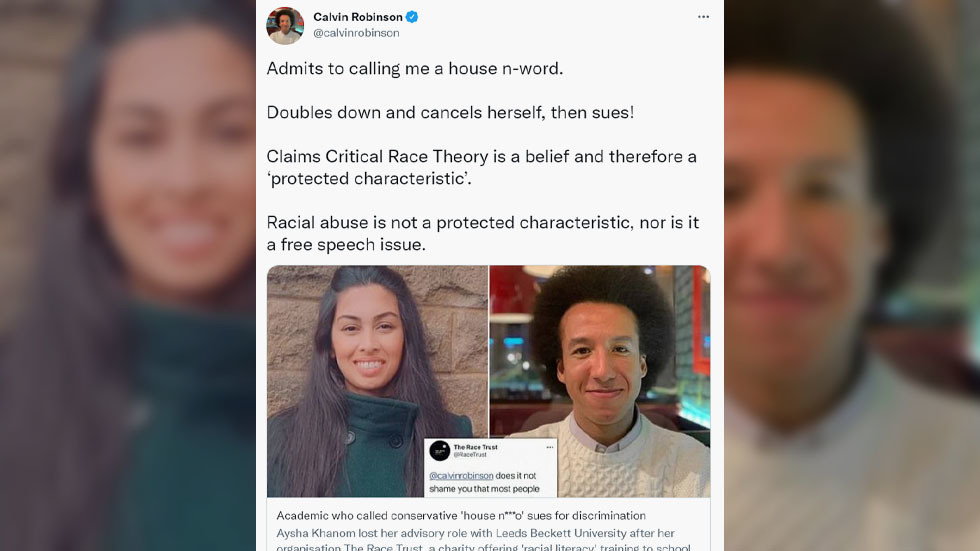 ‘Always the victim’: UK race activist called out for ‘cowardly bullying’ after suing university for discrimination over race slurs

The founder of a UK ‘racial literacy’ charity has drawn flak for “playing the victim” after suing a university for discrimination. It had cut ties with her for calling a conservative political commentator a “house n***o”.

In February, Leeds Beckett University (LBU), in the north of England, “condemned” Aysha Khanom’s “use of racist language” after her organization, the Race Trust, which offers race training courses, used the slur in a tweet about conservative political commentator Calvin Robinson. Khanom also used the derogatory term “coconut” in response to a comment.

Khanom is now claiming the university discriminated against her political views, arguing that critical race theory and black radicalism are protected beliefs under the UK’s Equality Act (2010).

The incendiary tweet was directed at Robinson, who is of Afro-Caribbean ethnicity, after he appeared in a TV programme in February in which he detailed the racial abuse he had received for being black and right-wing. The Race Trust account then tweeted at him, “Don’t you feel ashamed that most people see you as a house n***o?”

Claiming the terms were “meant to be offensive, because they’re anti-racist terms,” Khanom told the Guardian that she was “highlighting a problem”, and likened the issue to “almost upholding white supremacy.”

"It’s so contradictory, it’s unreal – racists have taken these terms and defined them for us. There is no way they are racist. They are meant to make someone feel uncomfortable, but just because something’s offensive, doesn’t mean you can’t say it."

Khanom has created an online fundraising page, titled “Sacked for asking a question”, to raise £5,000 to cover her legal costs. In the description, she claimed to have been the victim of a “network of alt-Right activists” and says this was a “freedom of speech” issue. She also opined that no academic should have their contract “terminated so publicly in the absence of a fair and thorough investigation”.

Her claims were supported by a number of academics, including Professor Kehinde Andrews, who teaches black studies at Birmingham City University, in the English Midlands. Andrews has penned an open letter that accuses LBU of “[censoring] central concepts in Black intellectual thought” and notes that the slurs used were “concepts that come out of struggles for racial justice”.

However, Robinson responded in a series of tweets in which he stated that “anti-racists [were] the new racists” and asked Khanom’s supporters to explain what exactly was “courageous about racially abusing someone”.

The majority of social media users agreed with Robinson and countered that Khanom’s claims of ‘free speech’ and legal protections amounted to “cowardly bullying, dressed up as ‘progressive academic thought’. Others warned that she was “playing a dangerous game” in trying to secure legal protection for a political belief under the UK’s anti-discrimination law.

A number of commenters accused Khanom of “playing the victim” instead of “owning her racism and bigotry”, while others came out in support and claimed her dismissal was the result of an “alt right stitch up”.

A university spokesperson told The Guardian that it would be “presenting a detailed response” against Khanom’s claim. Several Twitter users debated the merits of the case, with one person claiming it was “an argument on whether or not black people ... have the right to develop their own political thought and terminology”.