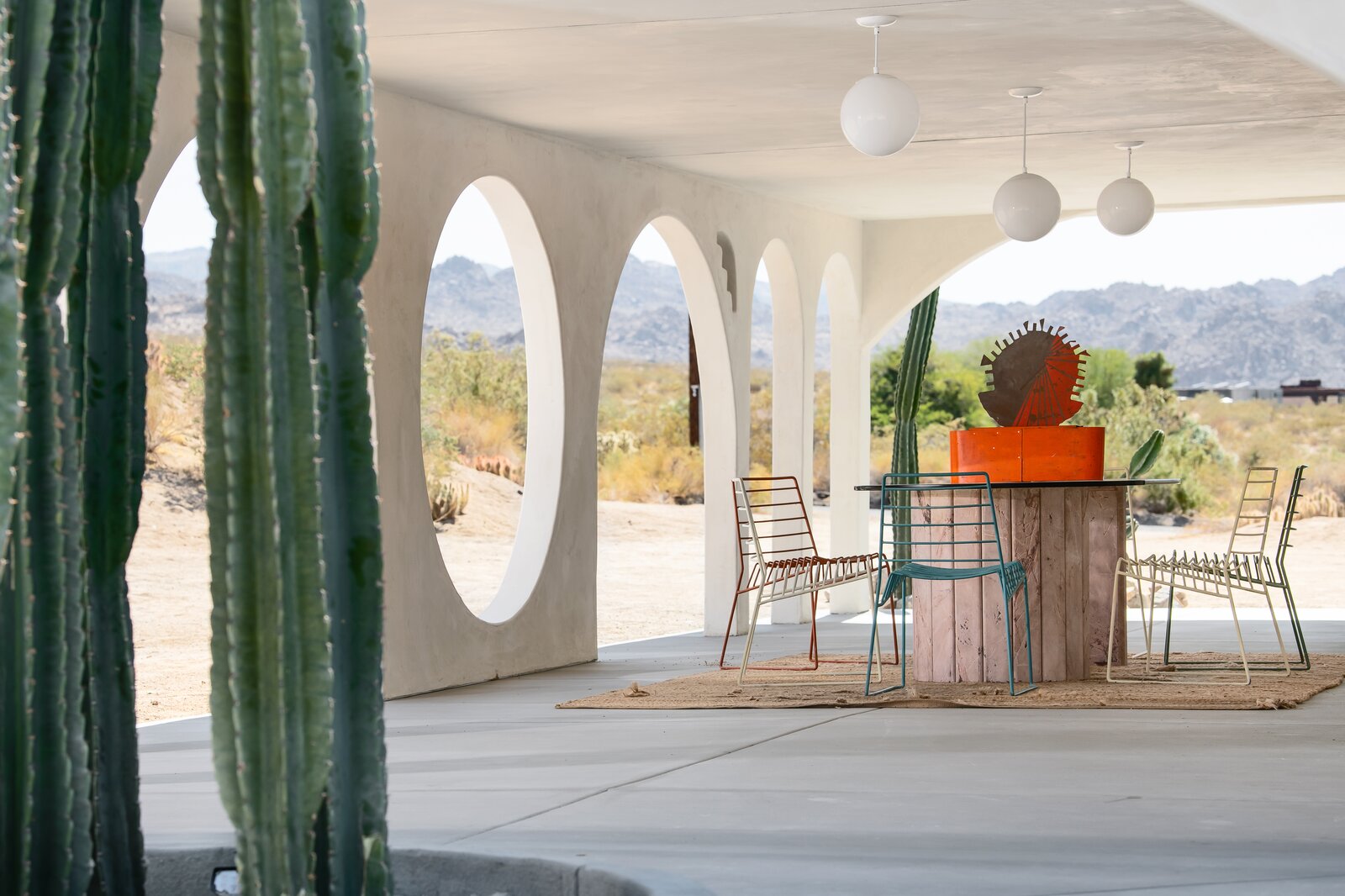 When Los Angeles–based artist Shawn Button considered buying a rental property at the edge of Joshua Tree National Park during the height of the pandemic, he knew it would be a risk. But the stakes became even clearer when he set foot on the site of the dilapidated 1959 cabin. "The house was pretty busted up, but as I walked around the property, the sun was setting and I started having these crazy visions of what it could be," Button recalls. "I knew it would be a gamble, so I asked the universe for a sign. Then, I looked down, and I saw a pair of dice in the sand." 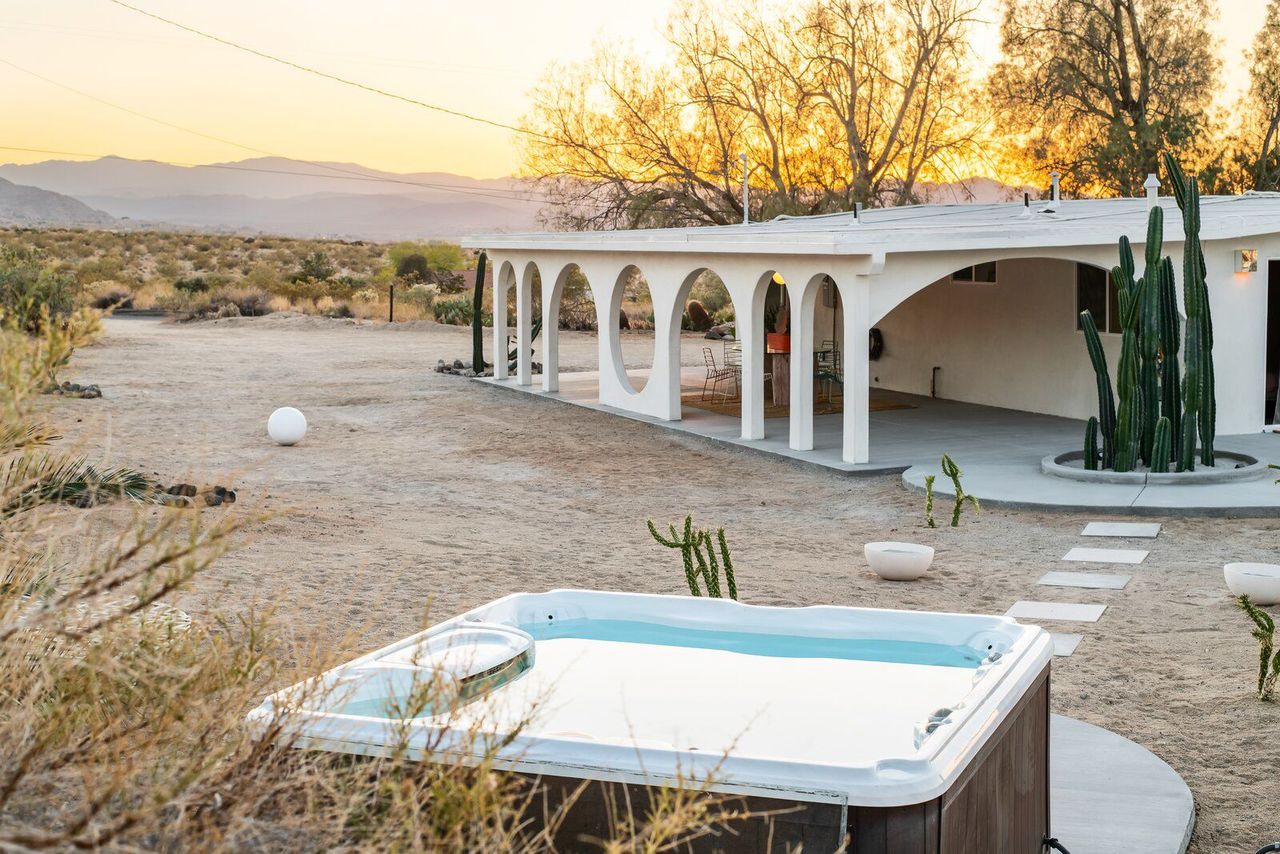 Artist Shawn Button’s latest project, The Meltdown, is an immersive art environment in Joshua Tree, California, available nightly rentals on Airbnb. "I wanted the space to function as a gallery or portfolio of my work, but also elevate it into a full-on experience so you feel like you’re living inside an art installation," says Button.

With that unmistakable sign to move forward, Button called his realtor and took the leap. Over the next six months, the artist got to work transforming the crumbling desert property into an otherworldly vacation retreat. Inspired by the surrealist qualities of Joshua Tree’s rocky landscape-and the house’s sublimely extraterrestrial neighbor, the 1980s Kellogg Doolittle House, also known as the High Desert House-Button sought to create a getaway that would surprise and delight visitors. "I wanted it to feel like an art installation," explains Button. "My work as an artist is not two-dimensional, so I wanted to elevate this place into a full-on immersive experience." 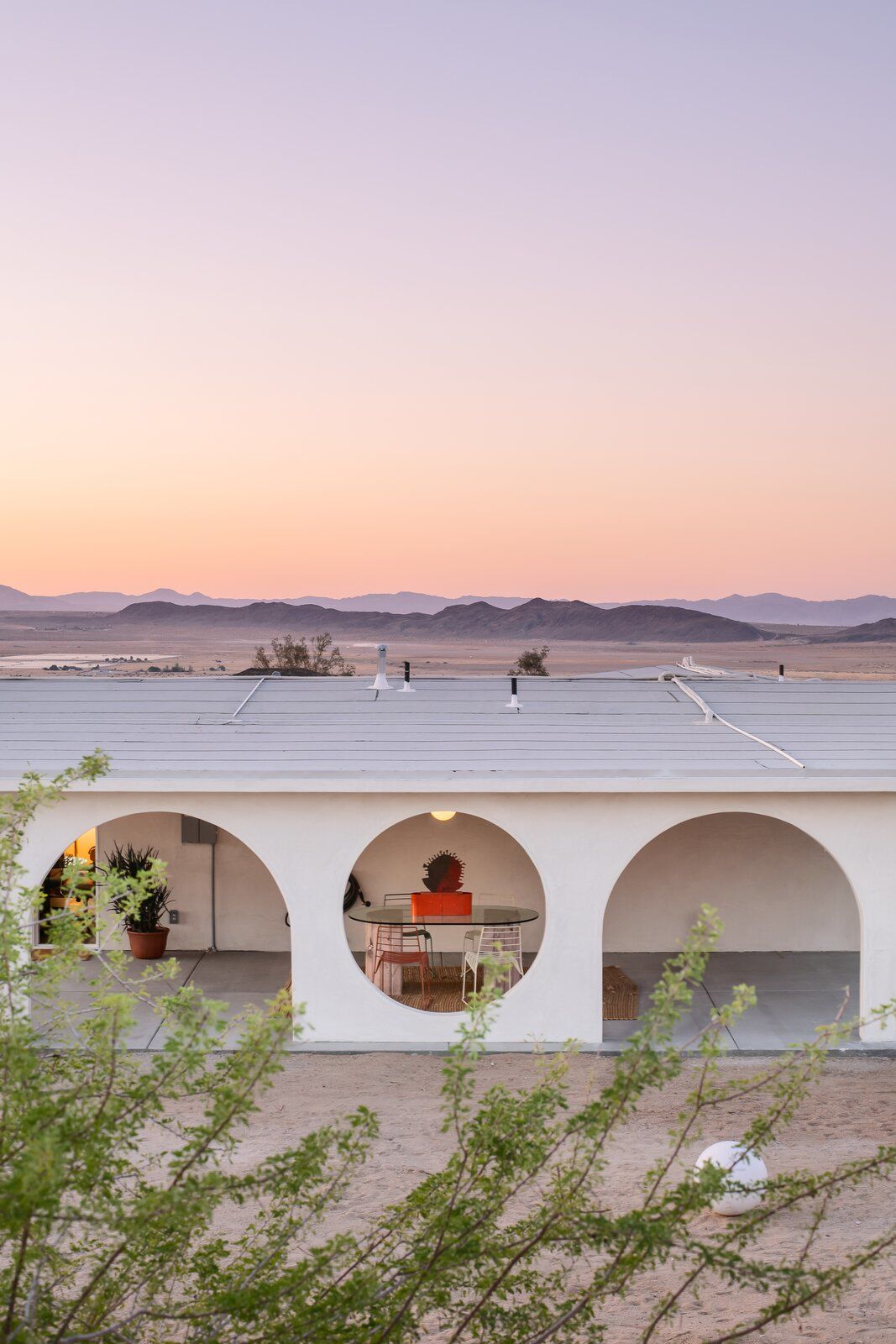 Button added new outdoor spaces to the home, including a covered side patio delineated by arches and circular openings. "There were so many squares in the existing space, so I wanted to balance that out with rounded corners and edges," says the homeowner and designer. 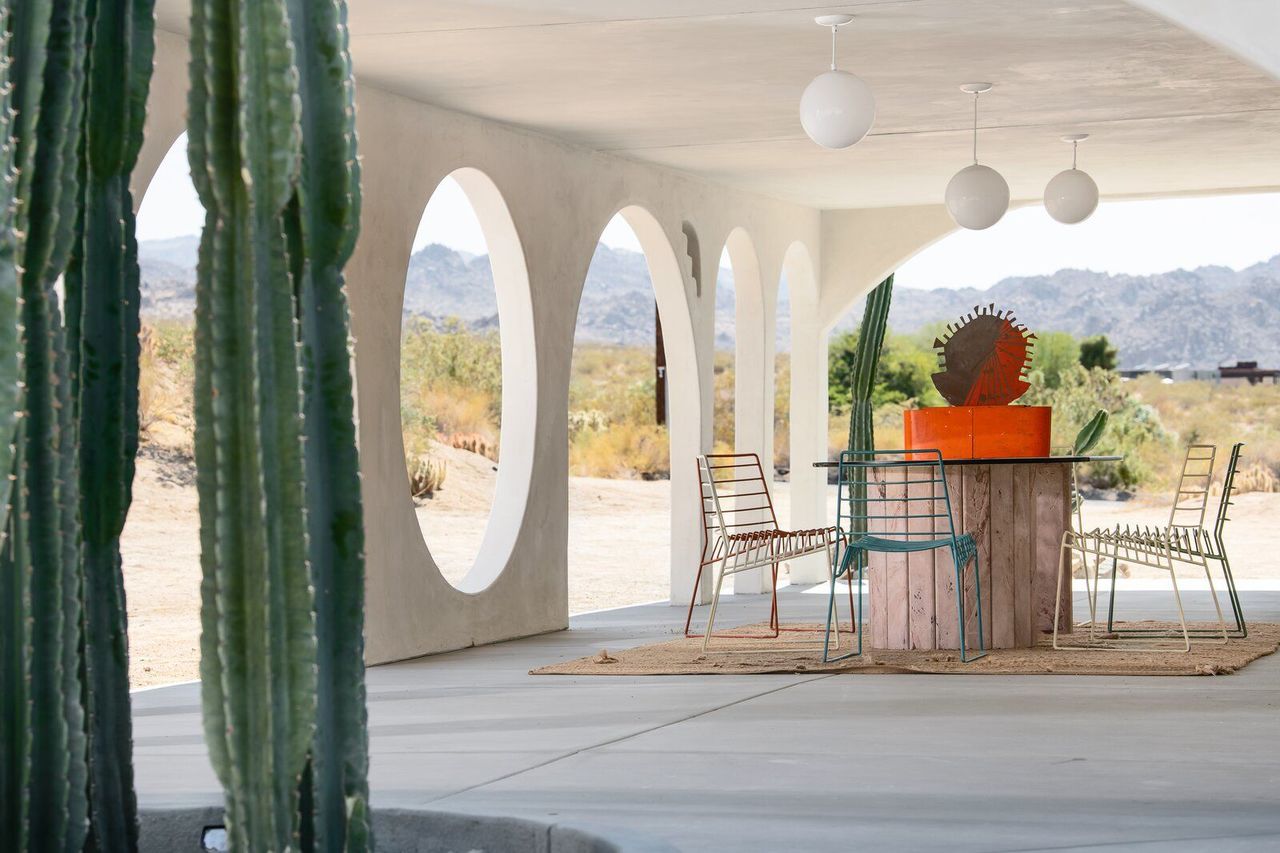 True to form, Button’s design process was anything but conventional. "I spent a lot of time sitting in the house to see where the sun and moon were setting and rising," says Button. "Then, I took photos of every space and traced them in Adobe Illustrator so I could fool around with different shapes." The resulting structure incorporates circular cutouts and arches that offer impressive desert views and counterbalance the right angles of the existing shell. 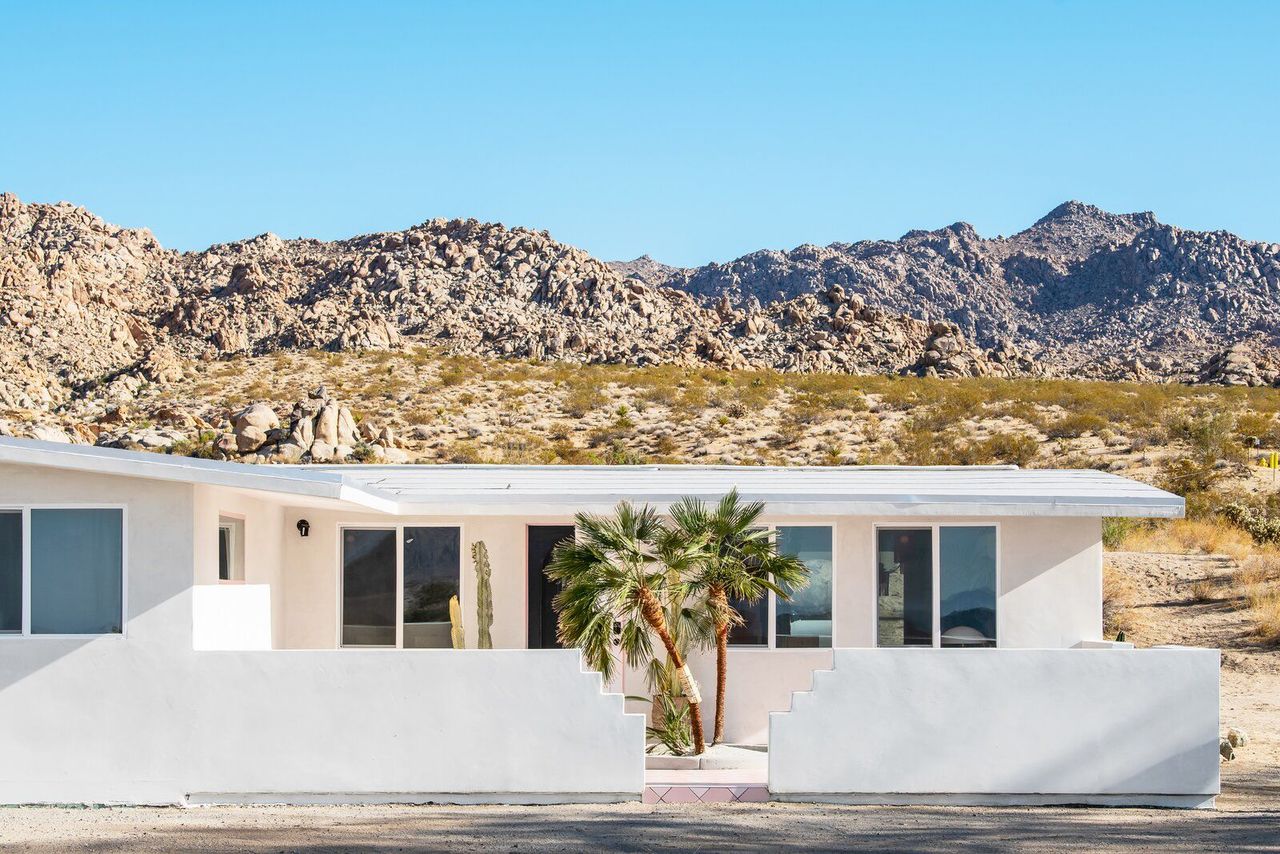 Button added a fresh coat of white paint to the exterior and planted a new, pink-tiled entry patio with palms and cacti. 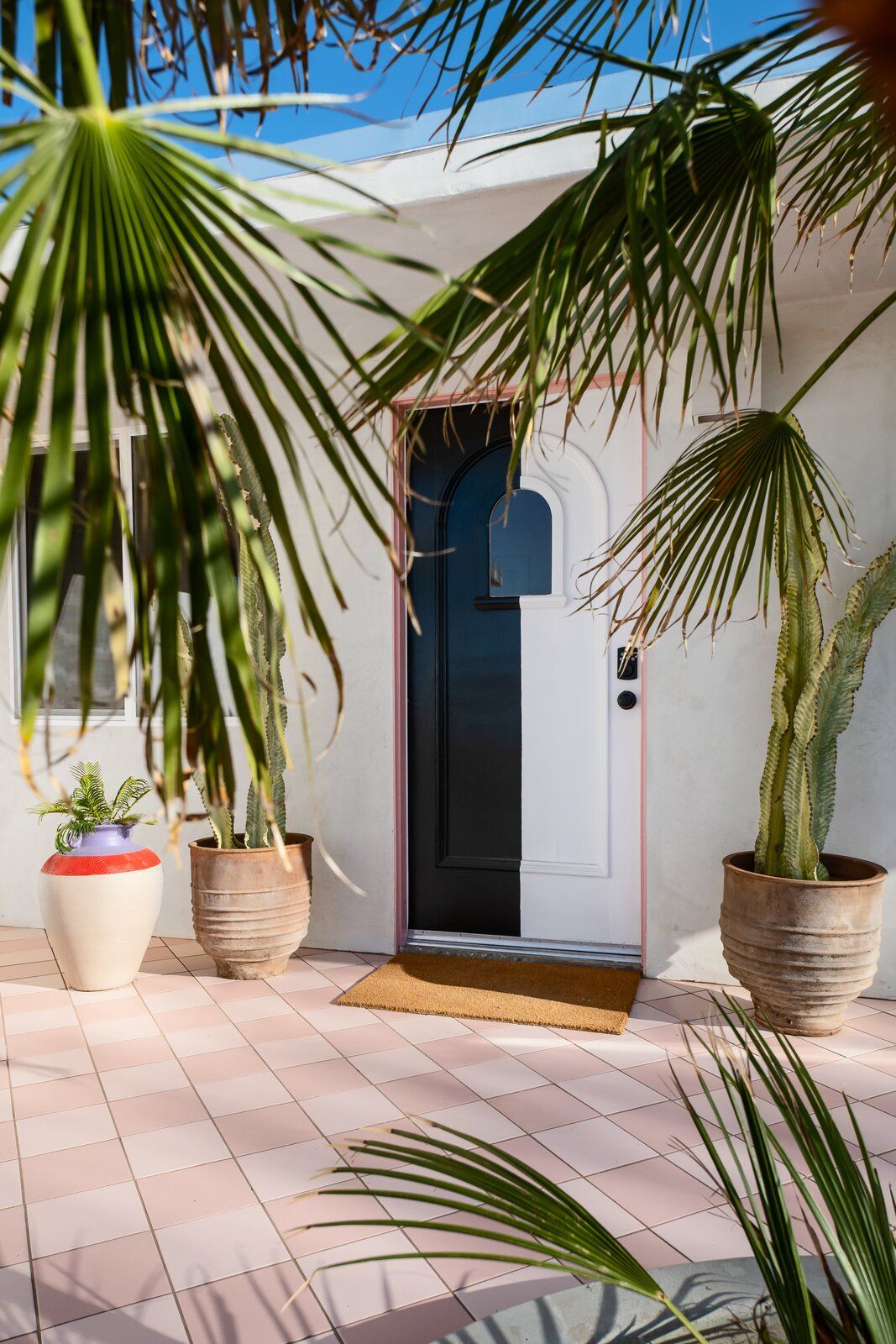 Pink tiling on the front patio foreshadows the color palette inside the home. "I was inspired by the colors that happen after the sun sets in Joshua Tree," says Button. All of the tiles throughout the interior are vintage from either Spain or Italy.

Meanwhile, Button was vigilantly combing flea markets and online marketplaces to source the home’s furnishings and decor. "I would wake up and spend the first hour or two of every day hunting online-I was going cross-eyed," he quips. Soon, Button amassed an eclectic assortment of objects ranging from a custom-carved, double-headed jaguar side table, to solid brass plates reclaimed from an elevator restoration in downtown Los Angeles and a set of Memphis-style barstools. The artist complemented these scavenged finds with handcrafted pieces he designed, including light fixtures, stained-glass mobiles, and mirrored sconces. 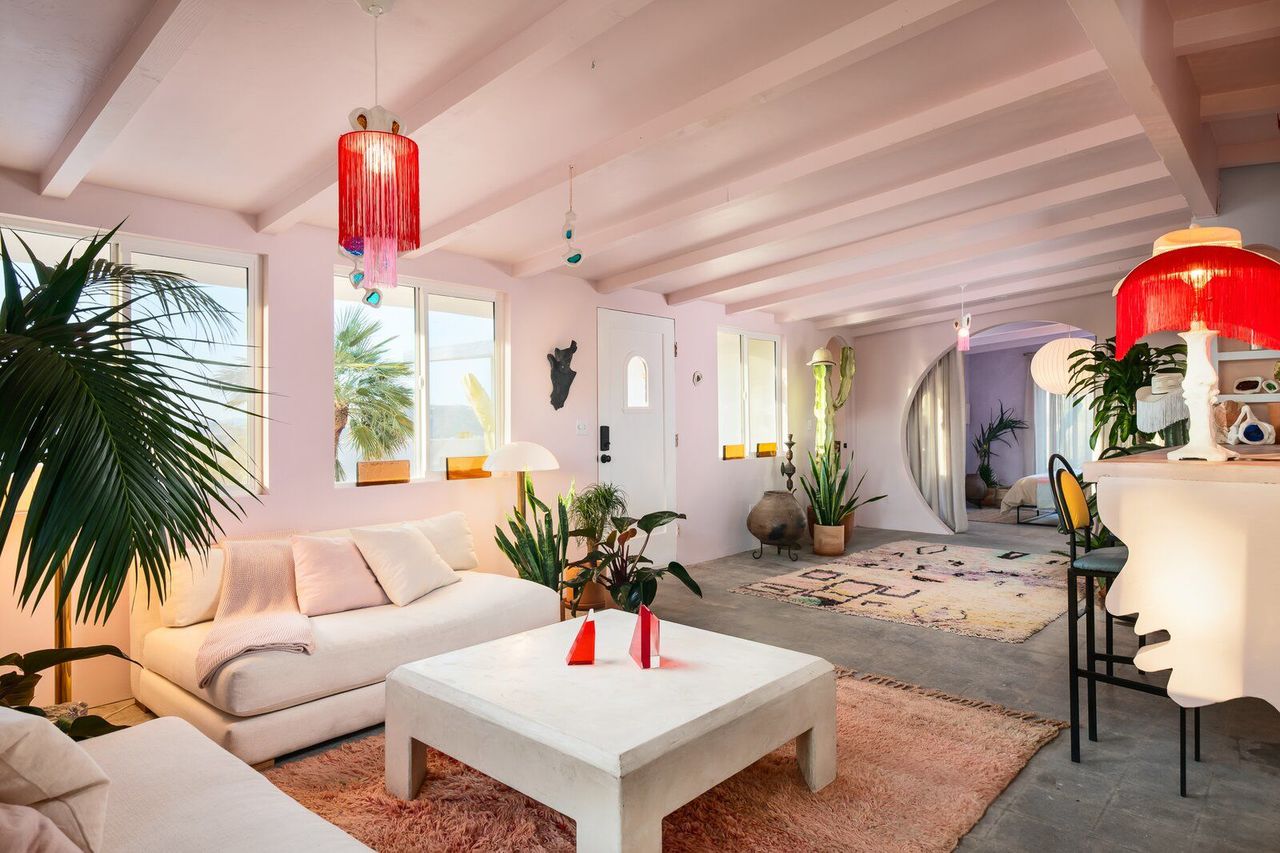 The furnishings are a mix Button’s own sculptural creations with flea market and Craigslist finds. "The plaster-covered coffee table is vintage," says Button. "It was one of the first pieces I bought and it set the tone for the space." 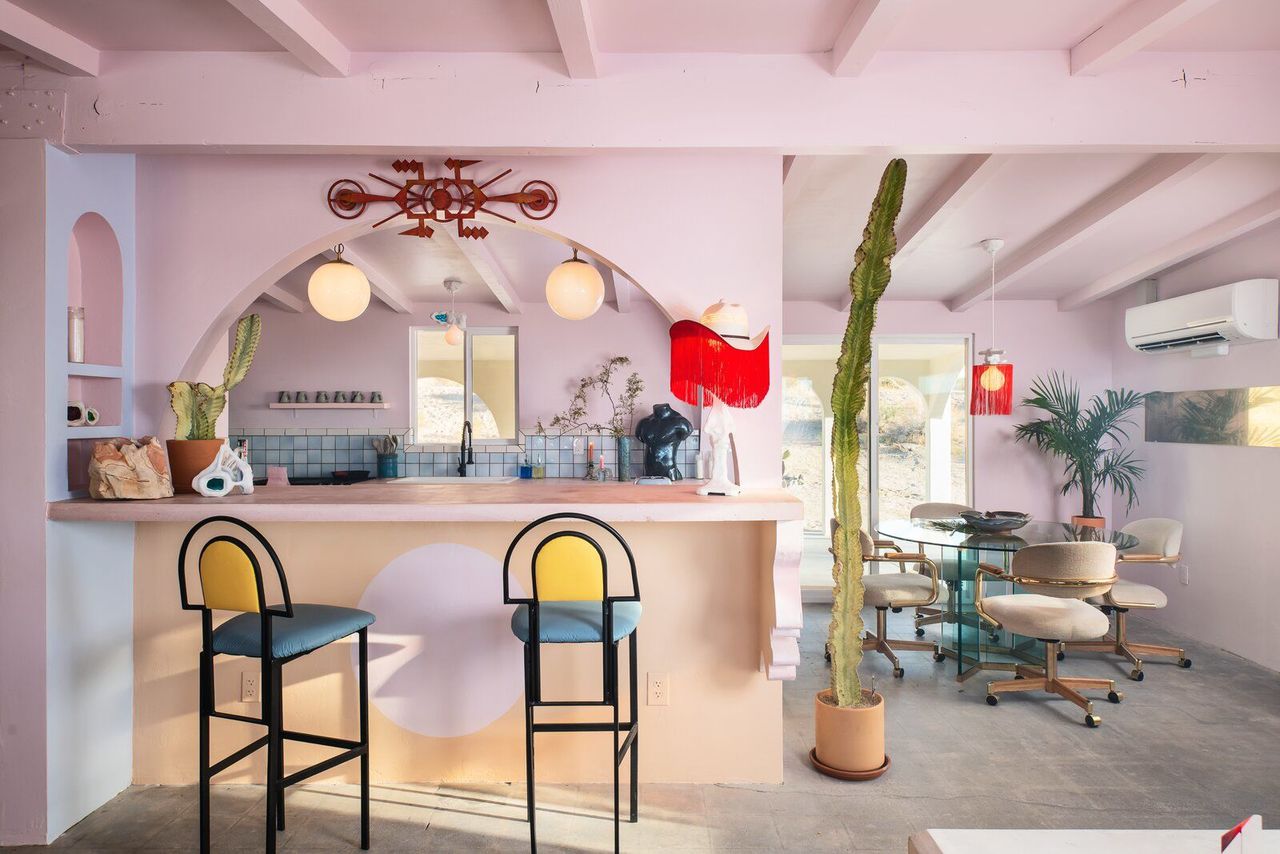 "I was drawn to the Memphis-style barstools because they felt like an ode to the sun," Button says. Most of the light fixtures in the home were crafted by the artist himself.

"Some of the objects are pretty unassuming on their own," says Button, adding: "If you were to single out any one of them, it might seem totally bizarre, but together, they work really well." 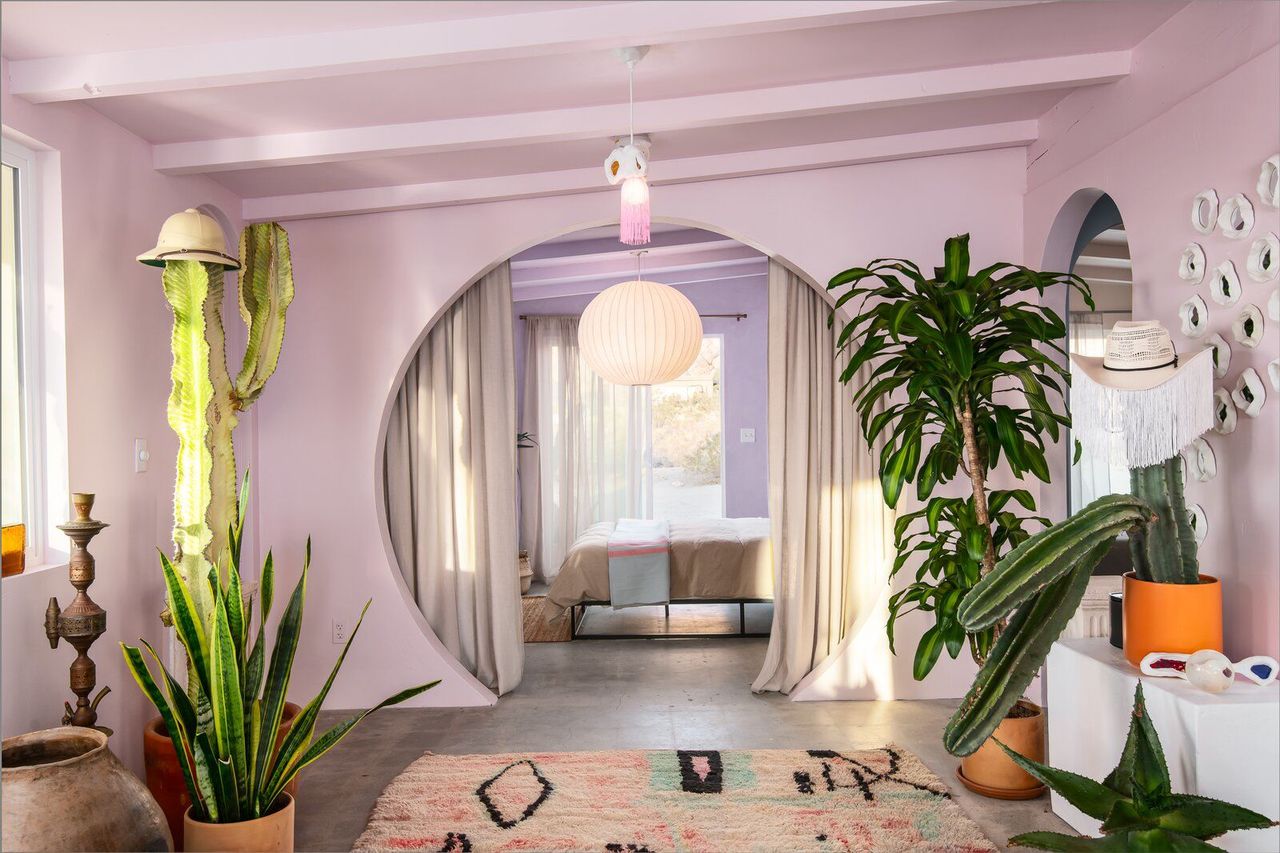 The desert getaway has three bedrooms, each with their own entrance to an outdoor patio. "Every room has its own color: purple, light blue, and pink," says Button. 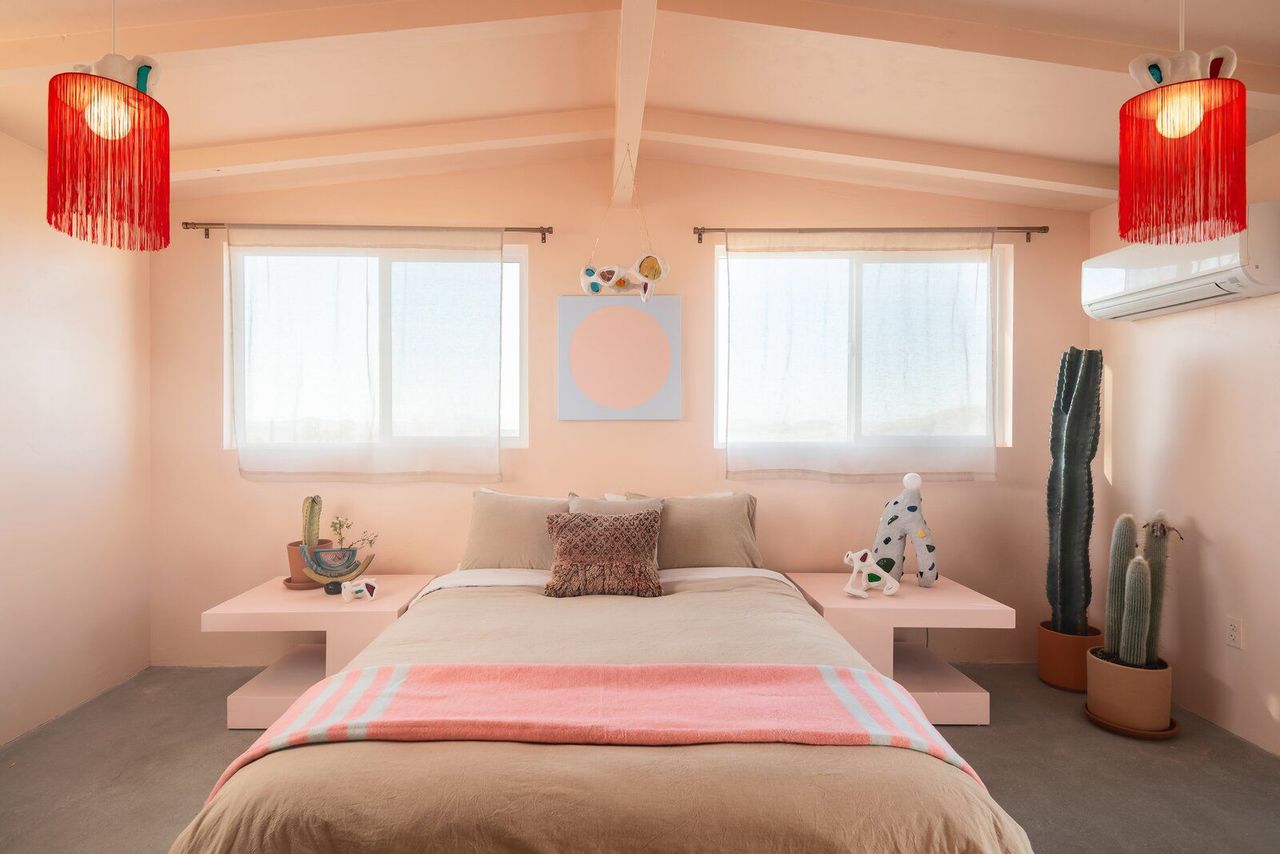 The primary bedroom contains custom light fixtures with stained glass designed by Button, as well as vintage side tables that Button painted the same color as the walls.

Outside, Button designed a host of new spaces including an entry patio clad in vintage European tile, a covered side patio under a converted carport, and a cactus garden located near an outdoor shower. A new hot tub sits adjacent to the house with unobstructed views of Joshua Tree National Park. "It’s fun to stargaze in the hot tub with the Kellogg House floating above you in the darkness of night," Button says. 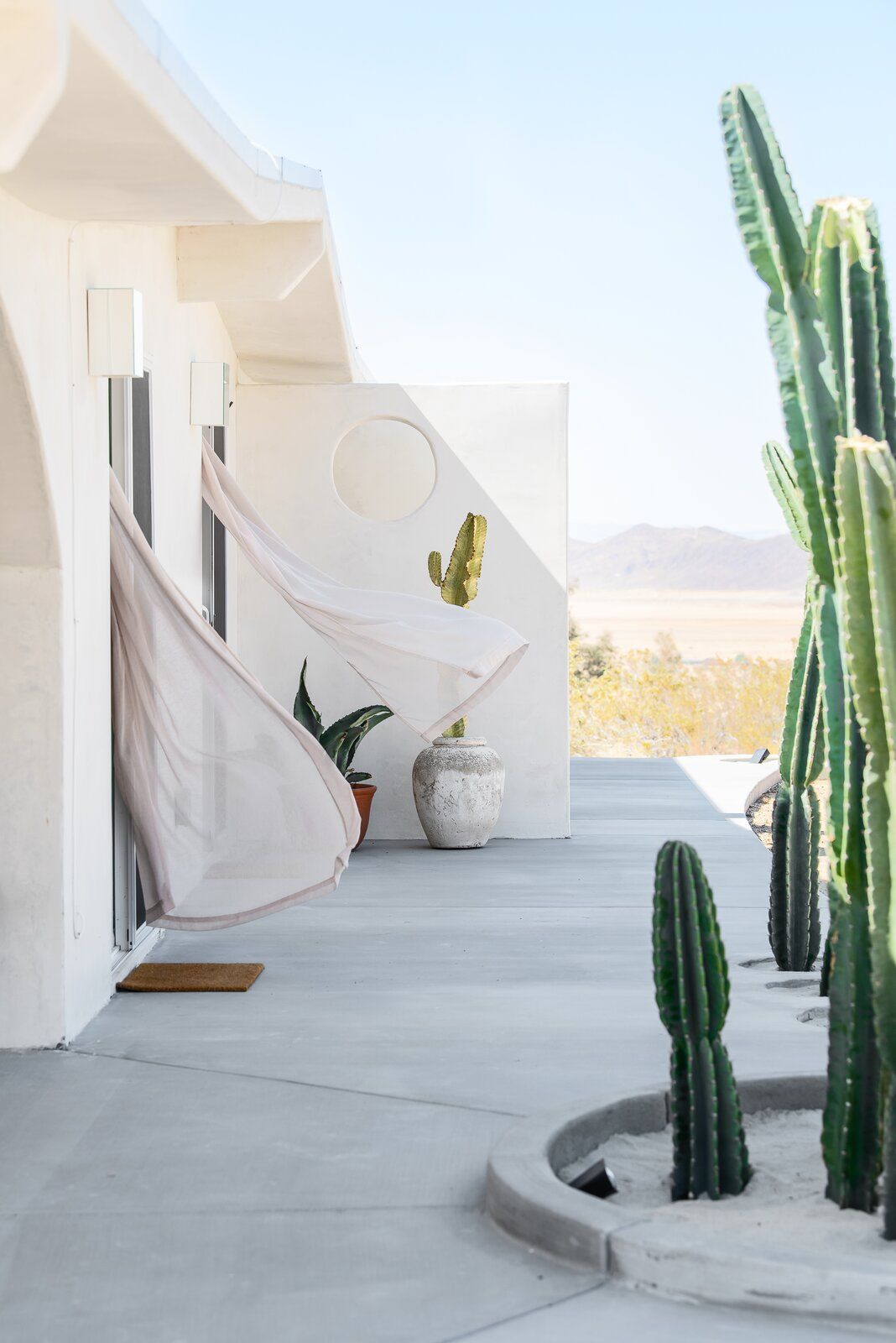 Button collected and transplanted all of the cacti himself. "They came from a woman who had a few acres of cacti in Orange County," says Button. "I rented a truck, went down there with an electric saw, and cut down these fifteen-foot tall cacti." 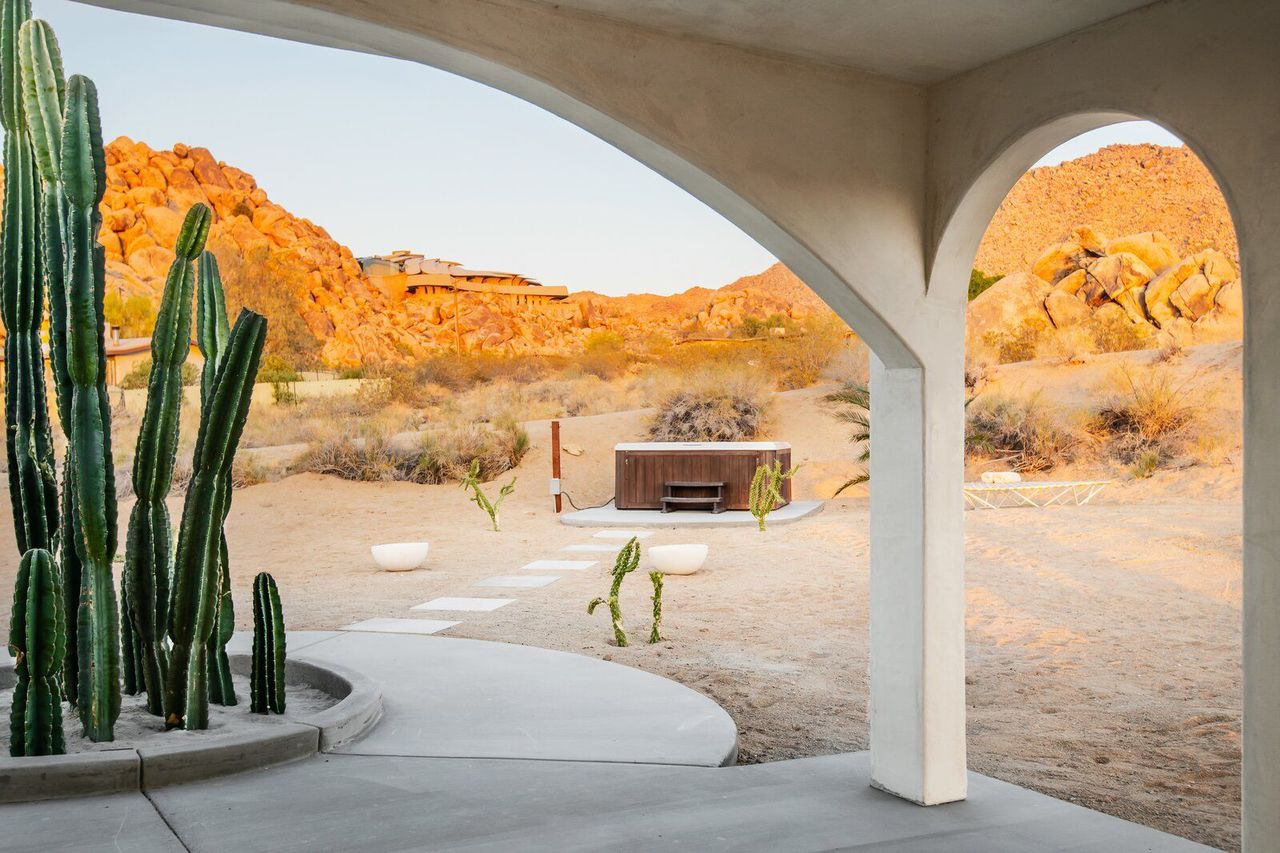 The new hot tub offers views of Joshua Tree National Park and the famed Kellogg Doolittle House above. The 5,000-square-foot home was designed by Frank Lloyd Wright disciple Kendrick Bangs Kellogg in the 1980s. Its cascading, organic form has been likened to that of a UFO. 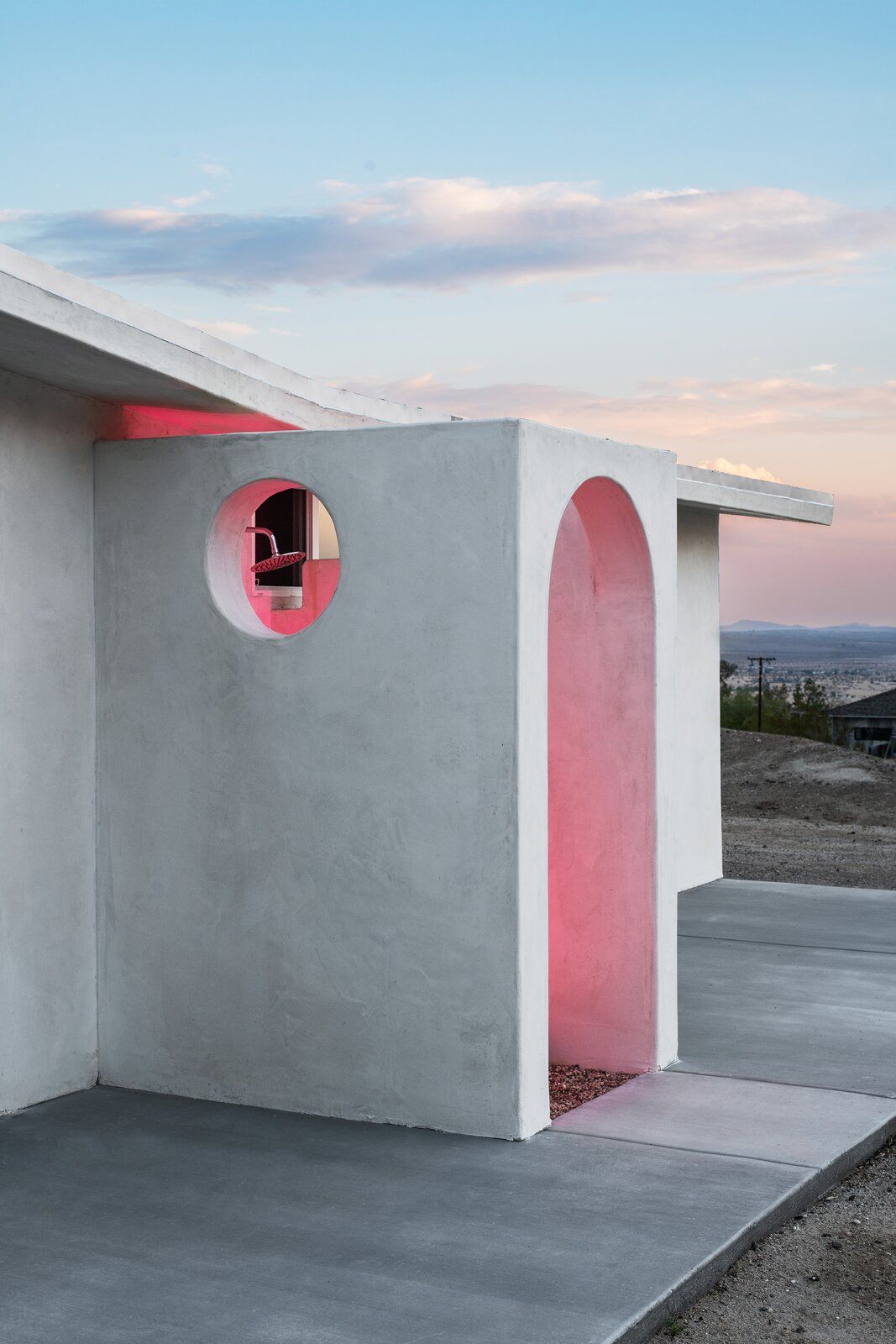 The surrealist-inspired, revamped space lives up to its name, The Meltdown. "It was important to include an element of surprise throughout," says Button. "I always want to be able to change someone’s perspective from a single vantage point within the design." 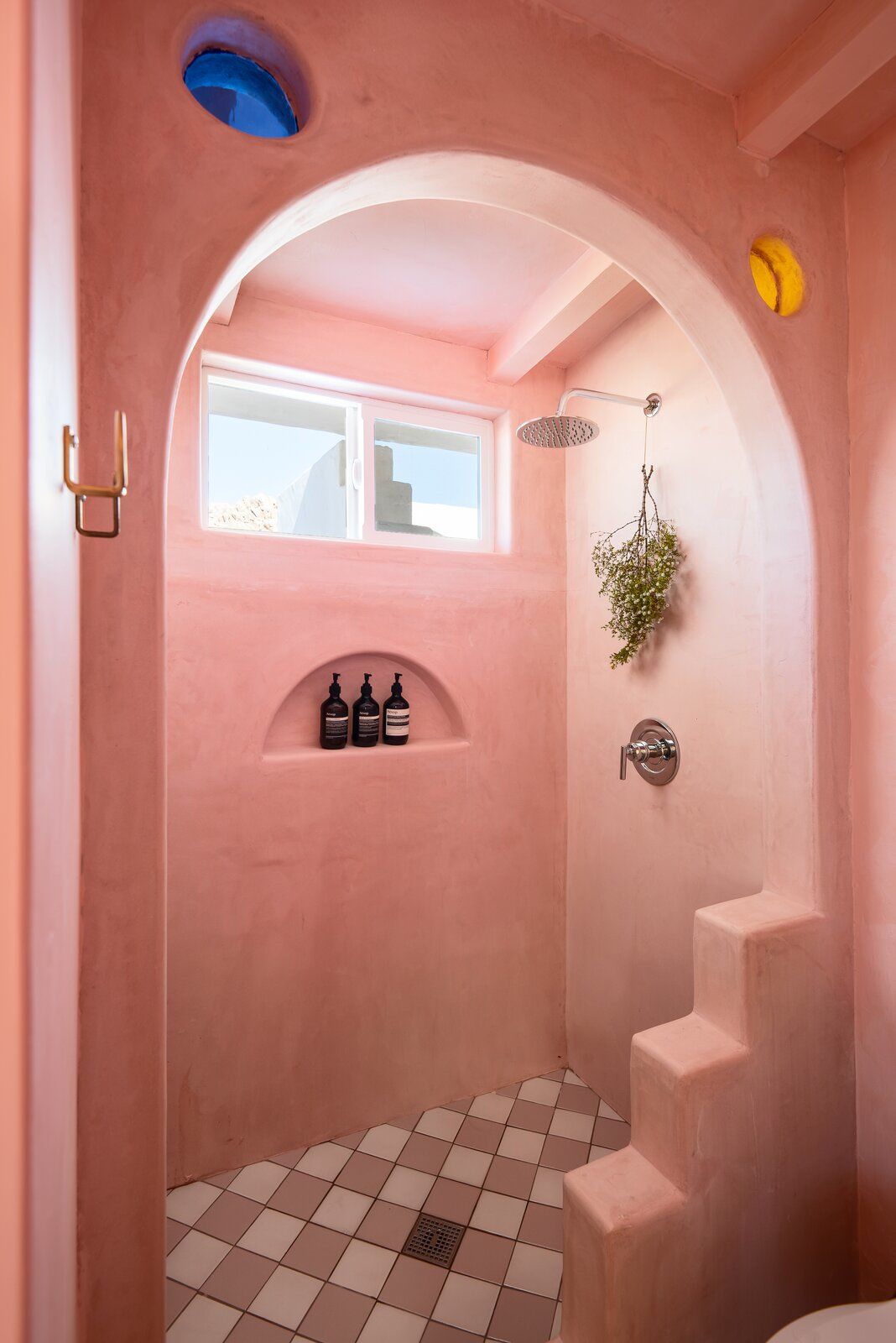 The color pink is featured prominently throughout the house, particularly in the primary bathroom. "I used pink for the walls because it absorbs the surroundings, especially during sunset," says Button. 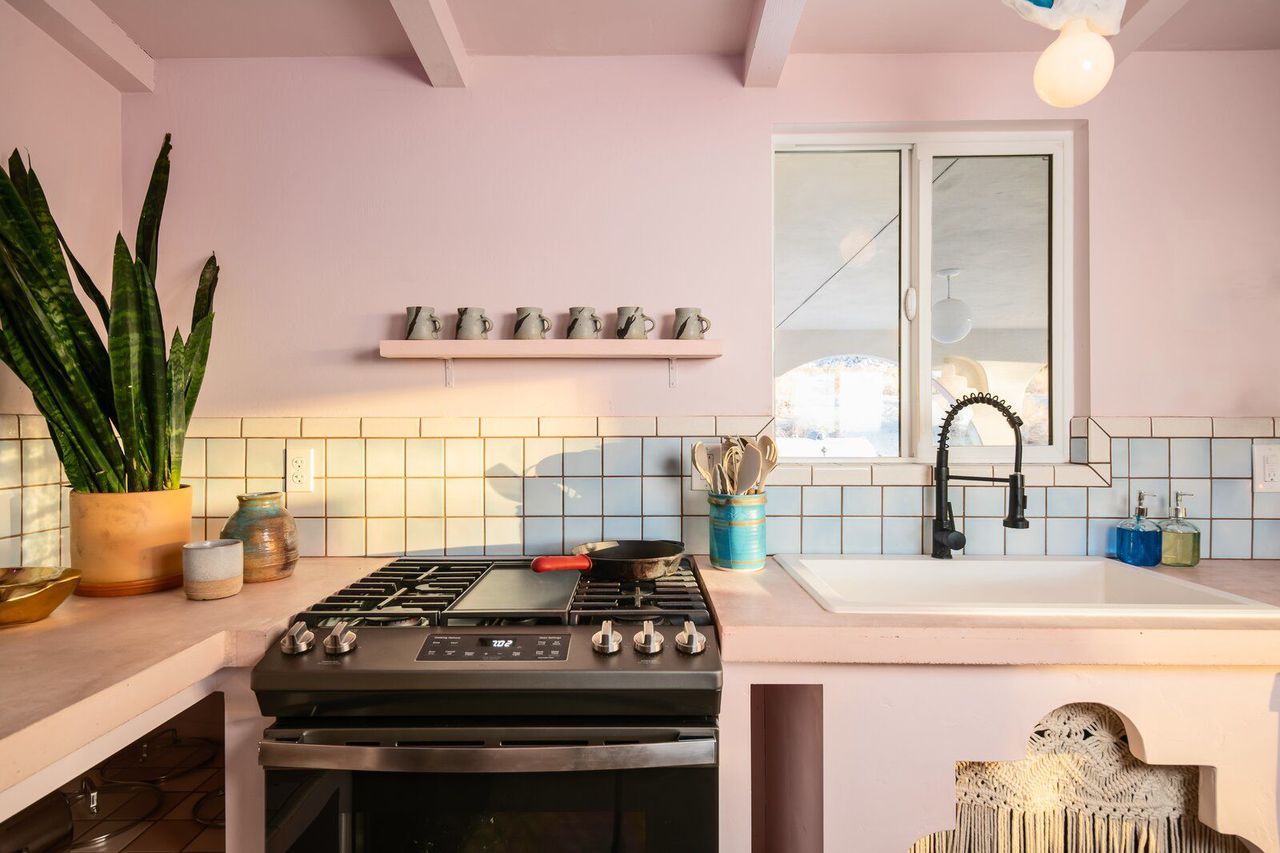 The color pink is also integrated into the kitchen countertops.

For Button, the process of manifesting The Meltdown was also personally transformative. "It was an amazing lesson and practice in trust," he says. "It was about making the place as bold as possible. The desert is brutal, so I had to hydrate myself energetically where I could, and trust that my thirst would be quenched in the end." 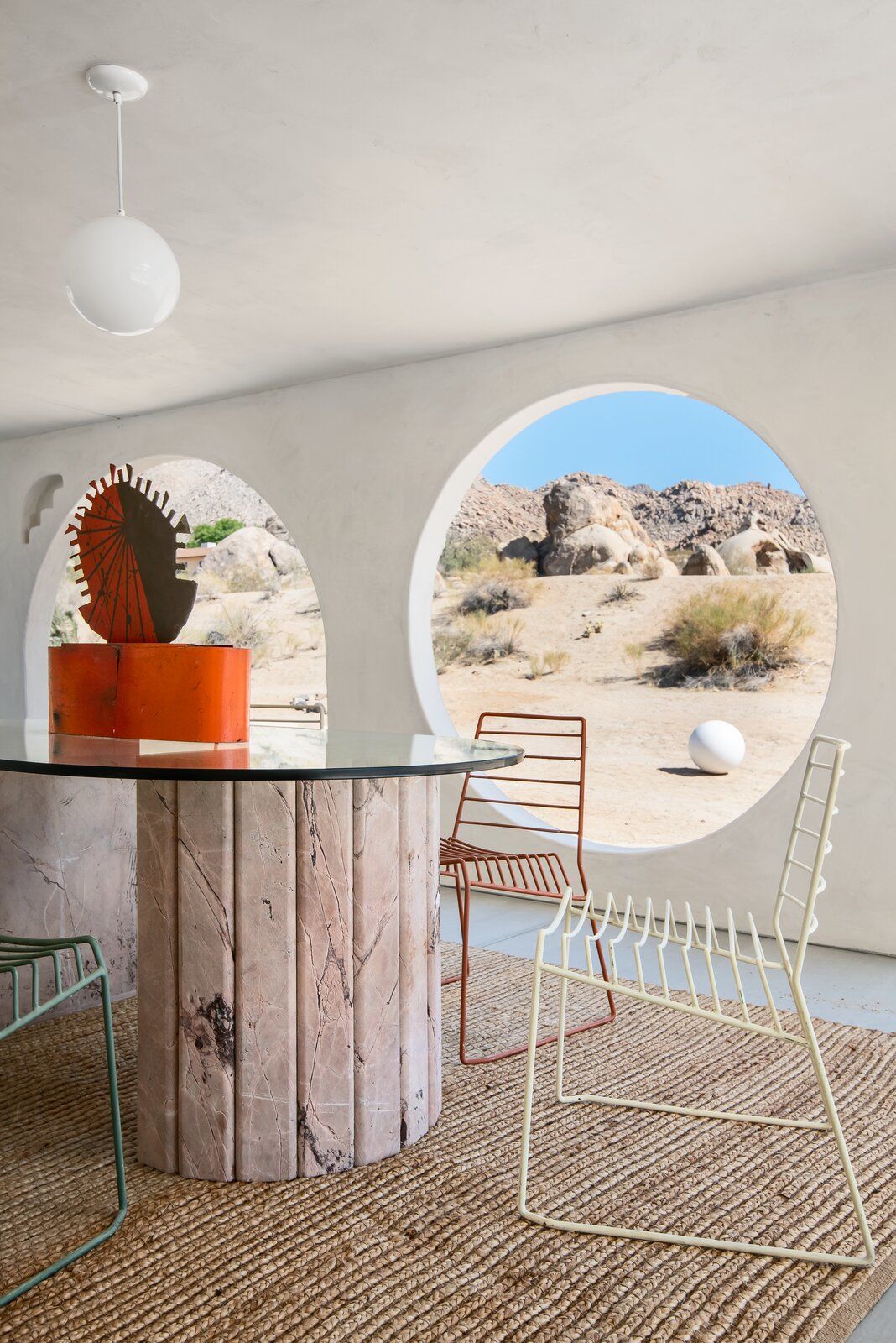 Available to rent on Airbnb, The Meltdown by Shawn Button in Joshua Tree, California, includes three bedrooms and two-and-a-half baths. 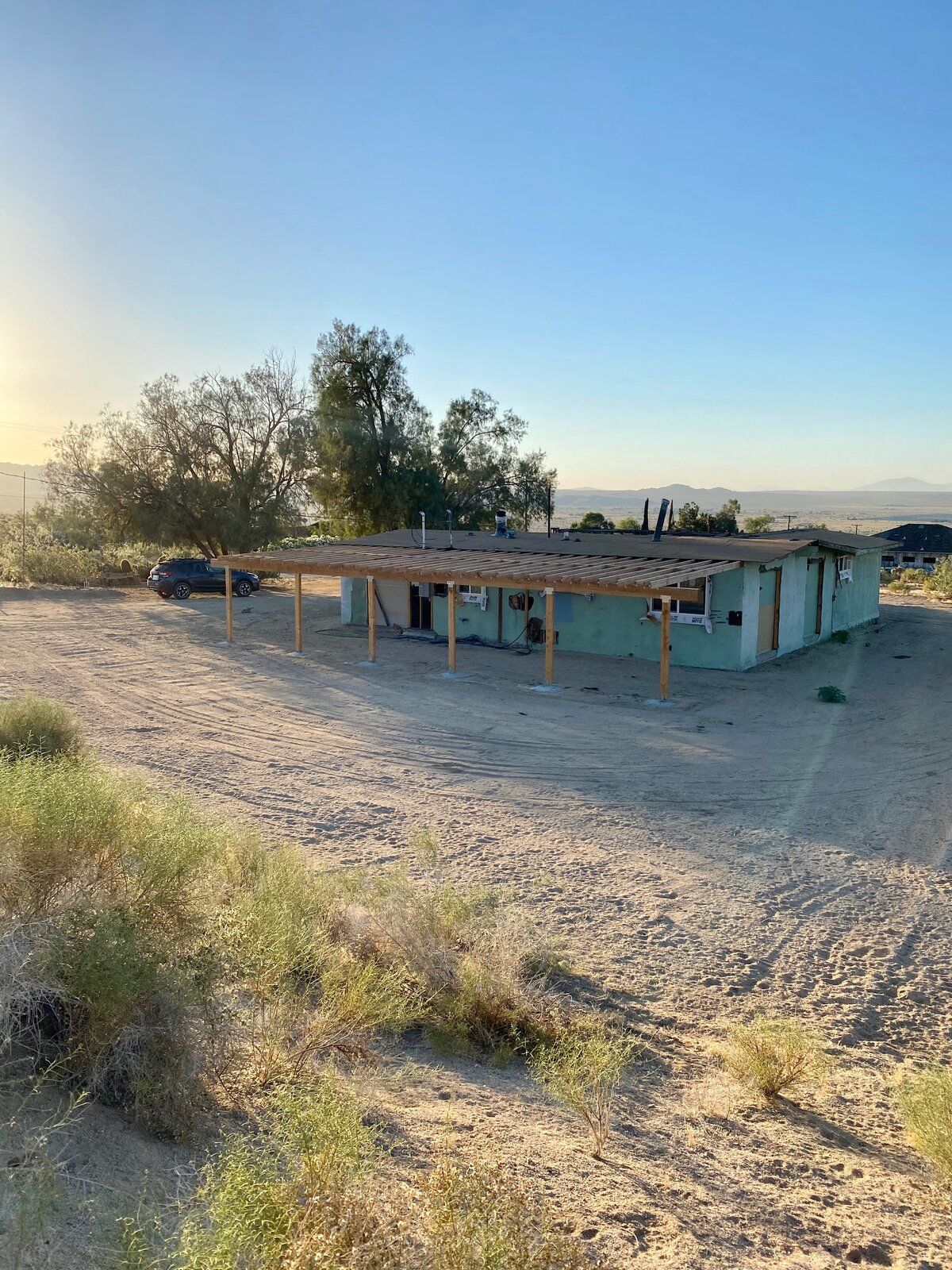 Before: The covered patio was a designated as a carport, and the Joshua Tree home had no hardscaping or dedicated outdoor living areas.