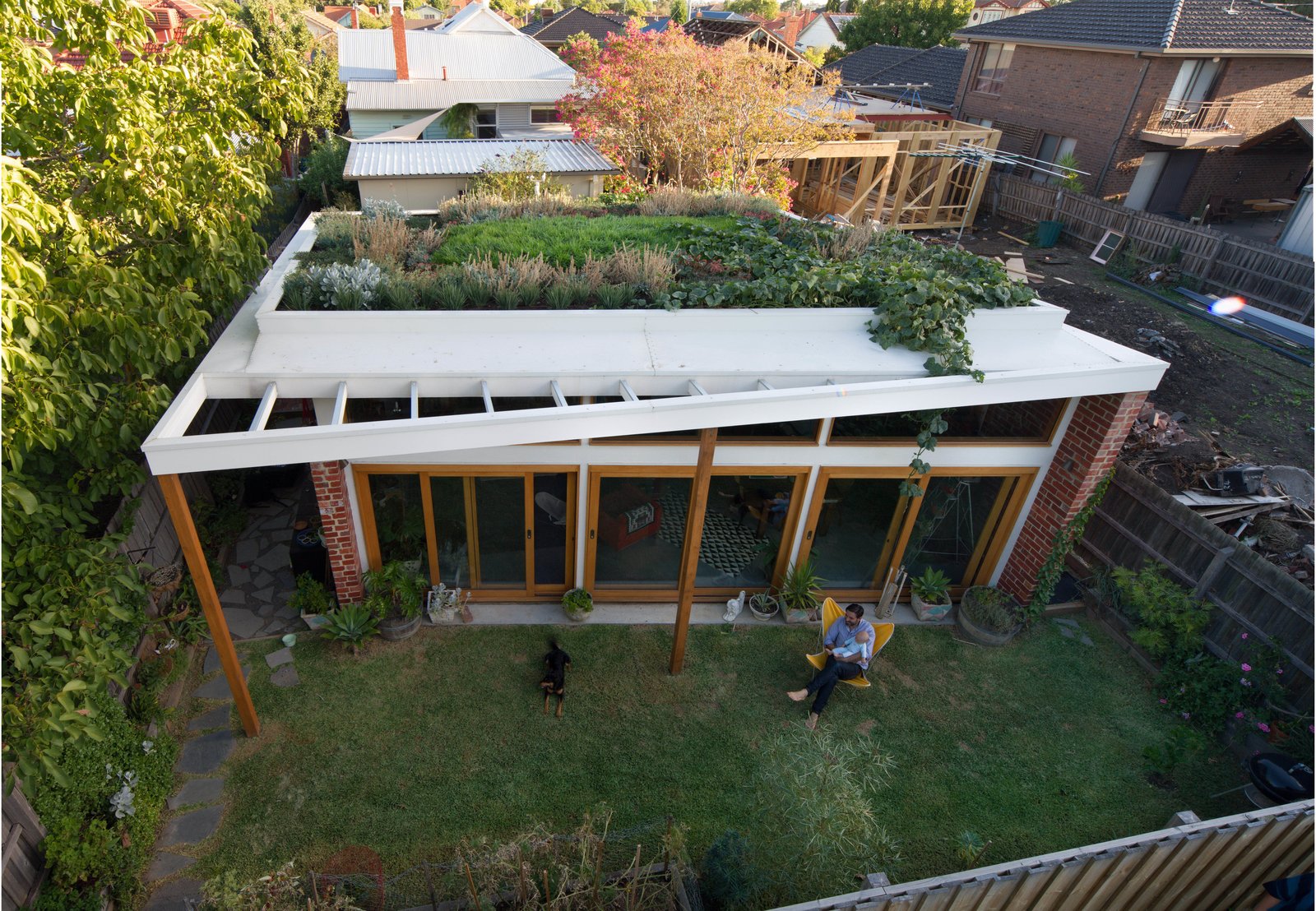 With a simple brick house on a tiny lot, an Australian architect shows that style needn't be fussy or expensive.

A few years ago, Emilio Fuscaldo and his partner, Anna Krien, needed to move, and they figured they would rent a house where they could live more sustainably. But when Krien suggested they buy a vacant lot in Coburg, a suburb north of Melbourne, Australia, Fuscaldo was surprised. 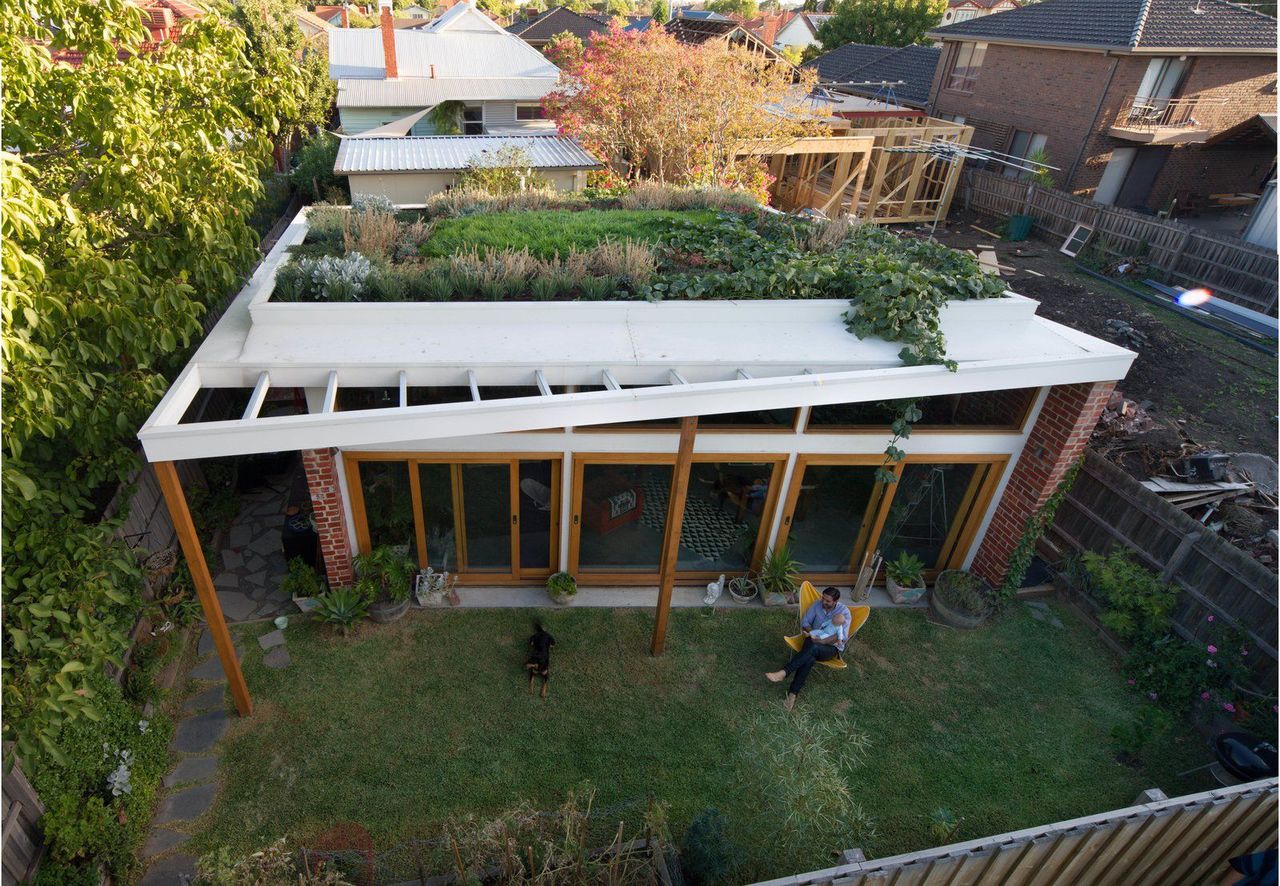 Emilio Fuscaldo sits in the garden outside the brick house that he designed for himself and his partner, Anna Krien, on a small subdivided lot in Coburg, a suburb north of Melbourne, Australia. Photo by Nic Granleese.

"She sent me this picture of a green square," says Fuscaldo, who founded the Melbourne practice Nest Architects in 2007. "But when I went to have a look, she was right. My architectural ears pricked up. The block was the perfect orientation facing north, with a laneway out the back." 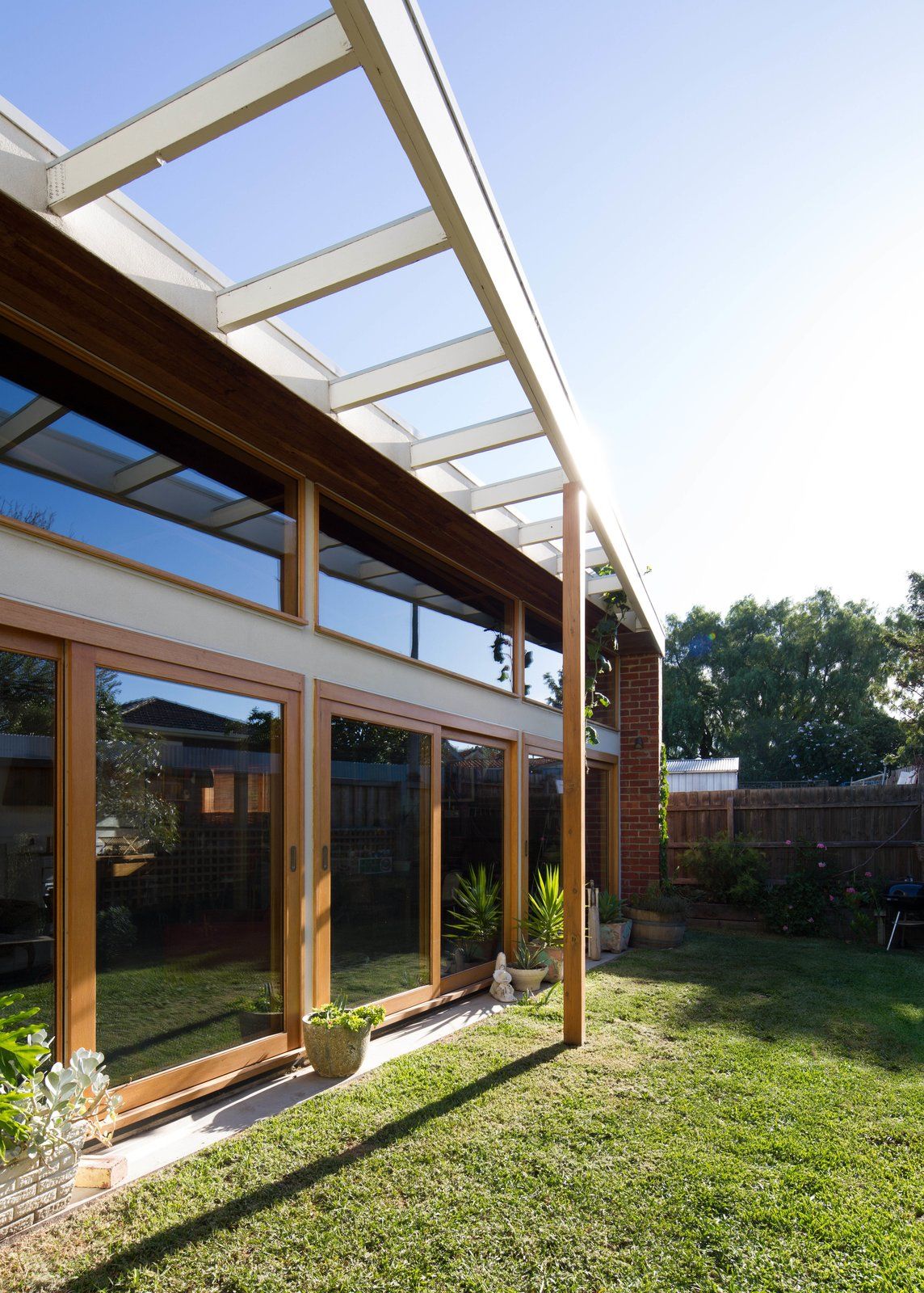 Fuscaldo describes the 860-square-foot, single-story house as a "beach shack in the suburbs." Photo by Nic Granleese.

"We had a lot of ideas in the planning stage," Fuscaldo adds. "We had to build something economically, but we wanted a fully sustainable house that doesn’t compromise on anything. Eventually we came up with a single-story design with two bedrooms and a green roof." 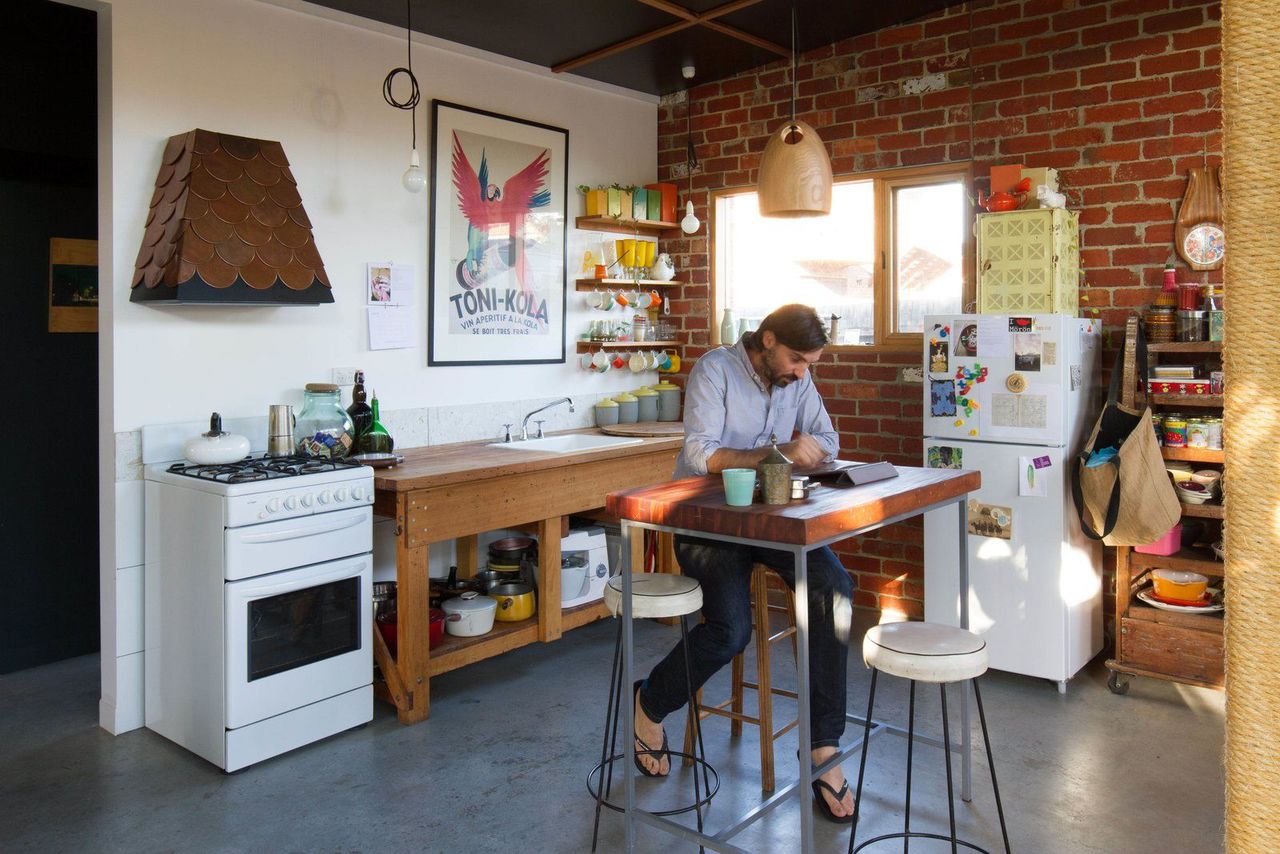 Fuscaldo and Krien found an old workbench and used the wood to create the counter around the kitchen sink. Photo by Nic Granleese.

That decision epitomized the couple’s priorities. Ask most new homeowners how many rooms they want, and most will probably opt for a minimum of three bedrooms and two bathrooms. But for Krien and Fuscaldo, two bedrooms were more than enough. 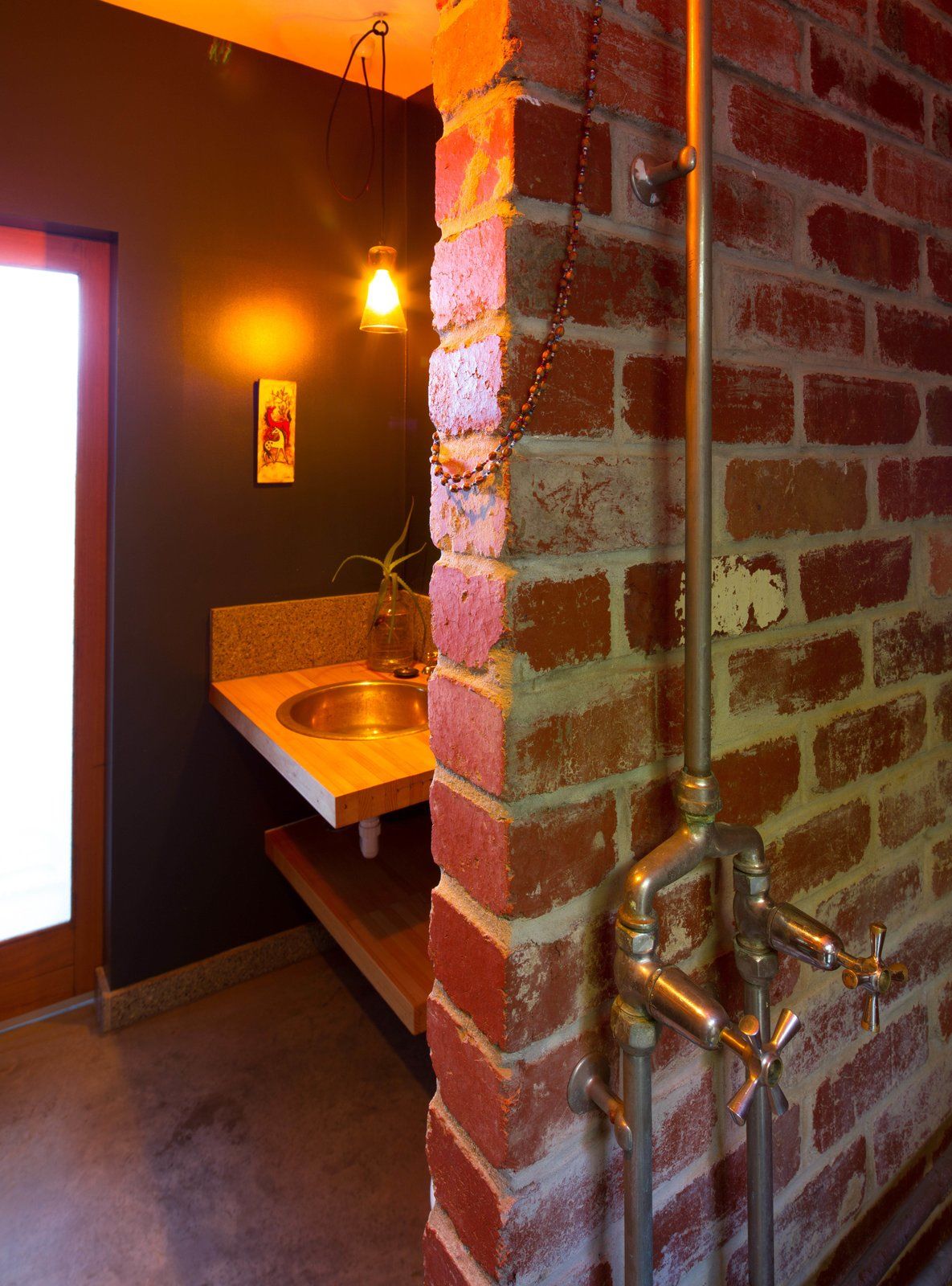 Salvaged bricks were used inside and outside the house. Krien describes the lone bathroom as "half nightclub, half swimming pool change room," and says it is her favorite space in the house. Photo by Nic Granleese.

"I guess if you were worried about intimacy it could be a problematic house," Krien says. "The bathroom’s not completely sealed. But that’s small living; you have to learn to live with each other. I don’t understand those houses where you don’t actually know where anyone is." 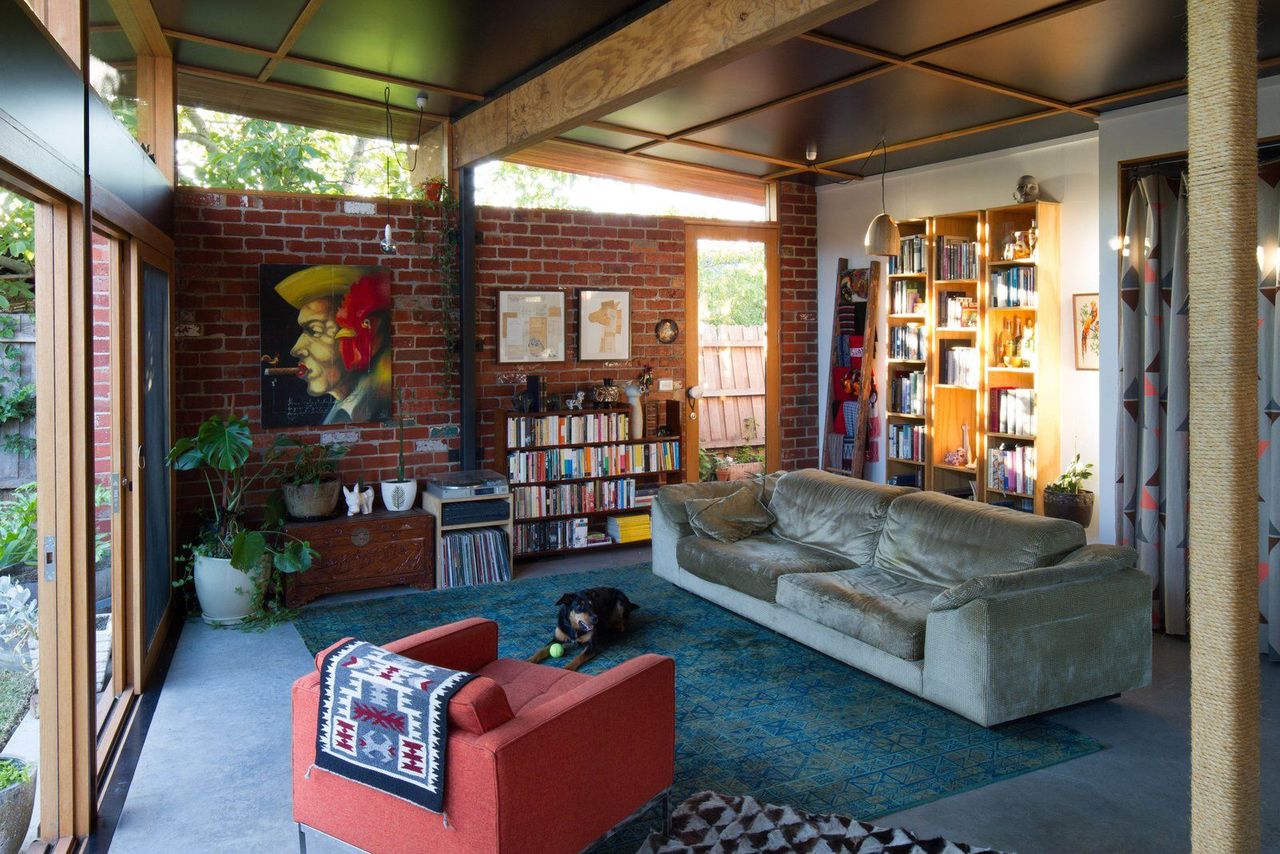 Most of the furniture in the house was purchased secondhand, or salvaged from the side of the road. Photo by Nic Granleese.

The house has four rooms-the two bedrooms, a bathroom, and an expansive living area with large north-facing French doors that flood the house with warmth and light. The kitchen occupies one corner, and a laundry is tucked behind a curtain. The only internal door leads to the bathroom, which Krien describes as "half nightclub, half swimming pool change room." It is her favorite room in the house. 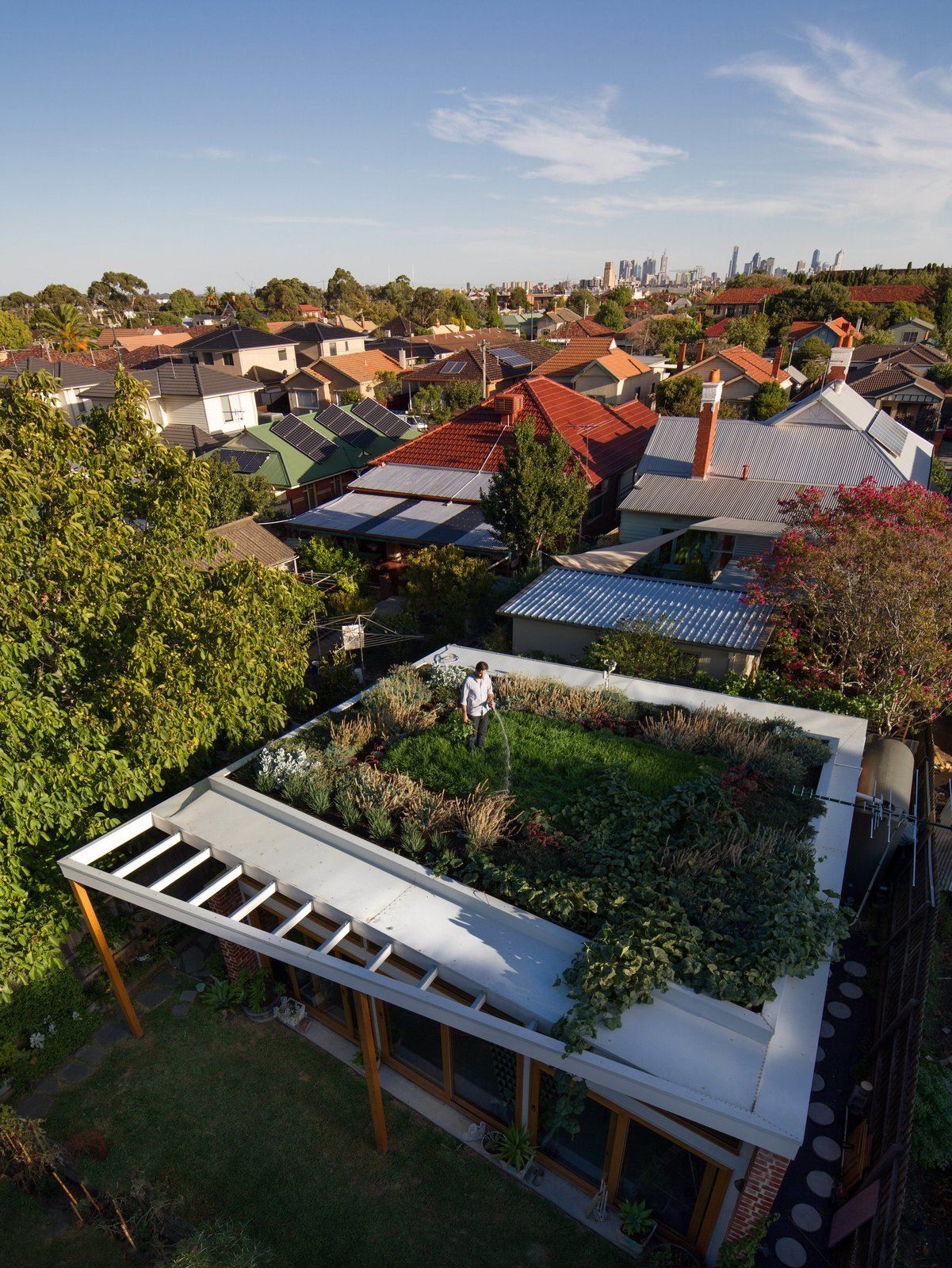 At over 500 square feet, the house’s green roof may be its most powerful-and most expensive-environmental statement. It cost $8,000 to waterproof, and $7,000 to landscape. Water from the roof feeds the toilet and the garden’s watering system, and the garden itself insulates the house and keeps gas bills low in winter. Photo by Nic Granleese.

The house had to be small – the land occupies the back half of a large, subdivided lot. The original owner still lives in the front half. It means the formal entrance is through their neighbor’s yard, but Krien and Fuscaldo don’t see that as a disadvantage.

"It has that casual Australian feeling of ‘coming ’round the back,’" he says. "I love it as an entrance, as opposed to that formal ‘stand-at-the-front-door-and-adjust-your-tie’ feeling."

Opting for a subdivided lot also enabled Fuscaldo and Krein to afford property on the relatively modest salaries they earn as an architect and freelance writer, respectively. "Our friends are mostly buying in the country," Krien says. "We’d committed to renting for the rest of our lives. We never thought we could afford to buy in a place like Coburg."

Coburg lies just past the fringe of Melbourne’s trendy inner suburbs. As the tram heads north from the city center, the wine bars, live-music venues and record shops start to dry up and are replaced by Middle Eastern bakeries and tire stores. The location offers a quick trip to the city on public transit, "and it has baklava," Krien says. 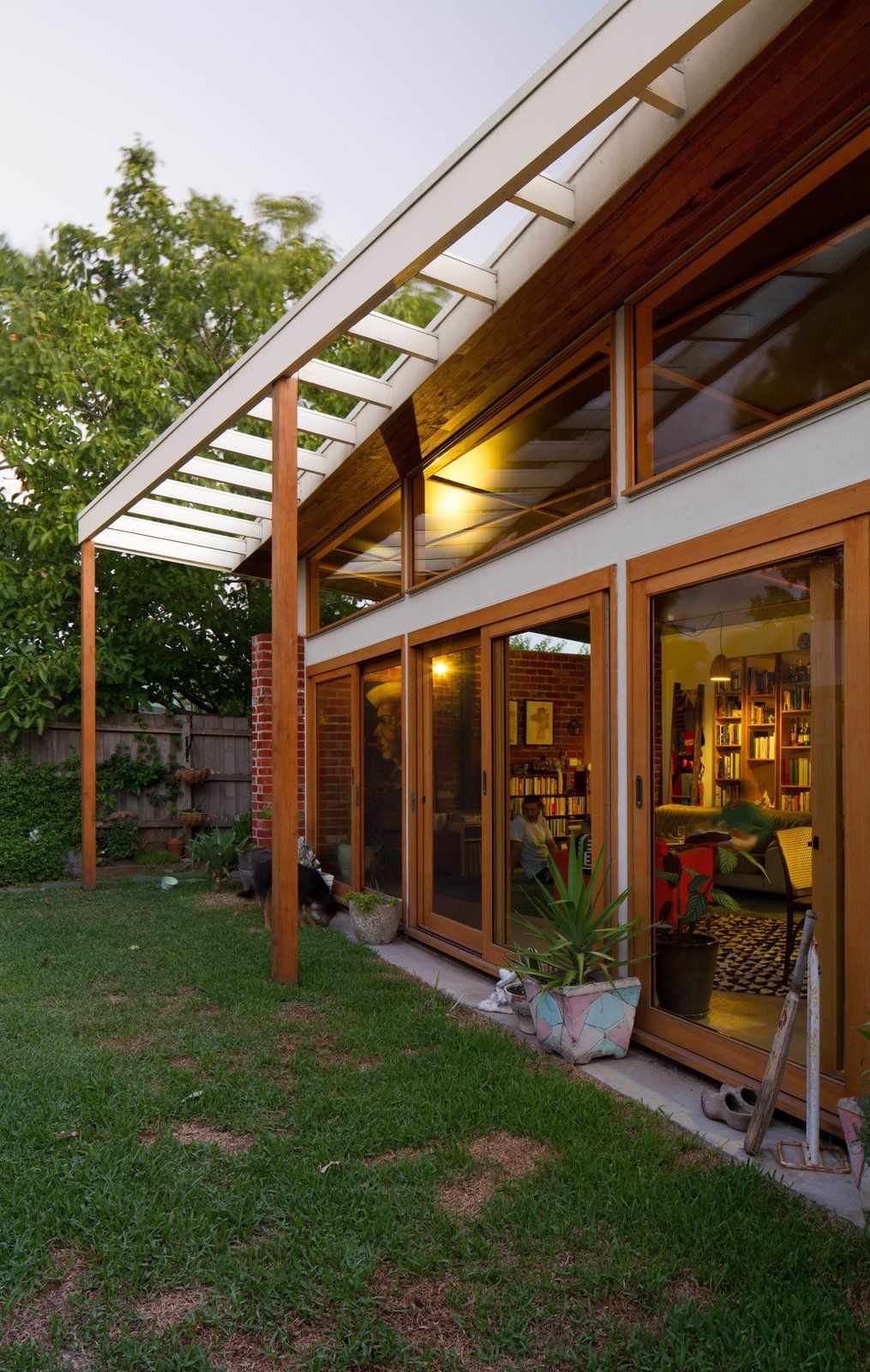 This is the first house in Victoria whose structural timber is entirely Forestry Stewardship Council-certified. Fuscaldo sourced the wood himself, visiting hardware outlets around Melbourne, telling the builder where to get the best materials, and double-checking the integrity of the timber when it showed up. Photo by Nic Granleese.

The couple were on a rail-thin budget, but rather than blow what they had on fancy fixtures or more rooms, they put their money where their values were-on sustainability, every step of the way. This is the first house in Victoria whose structural timber is entirely Forestry Stewardship Council-certified. Fuscaldo sourced the wood himself, visiting hardware outlets around Melbourne, telling the builder where to get the best materials, and double-checking the integrity of the timber when it showed up.

"You can be sustainable at every point in the project," Fuscaldo says, "and you shouldn’t get railroaded because something is too difficult, or a builder says ‘don’t,’ or ‘I couldn’t,’ or you just turn up and something hasn’t been done. But be prepared for some heated conversations with contractors."

The rest of the wood is recycled-the timber used for the bathroom counter came from an old bowling alley, and the eaves were salvaged from two other buildings.

The walls are double brick, with a cavity in between for insulation, and the bricks themselves are recycled. "They come with a patina," Fuscaldo says. "They conjure up memories of a ’70s childhood."

All the paint and coatings are low-VOC. The windows are double-glazed with an argon gas interlayer. The floors are polished concrete, with gas-powered hydronic heating built into the slab.

"My favorite thing is lying there on the warm concrete with the sun coming through the windows," Fuscaldo says. "I love that the floor is a viable piece of furniture." 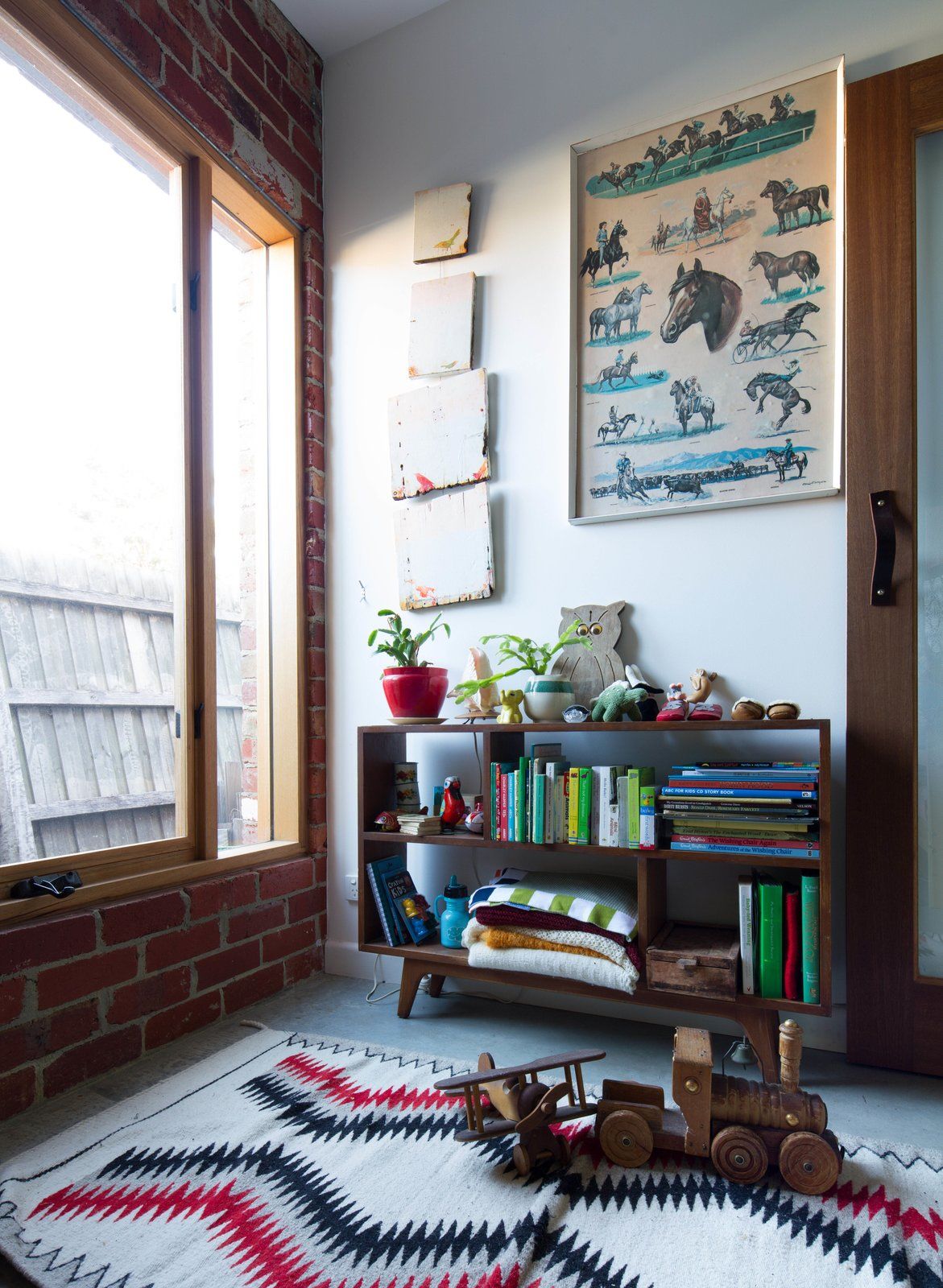 An interior shot of the house. Photo by Nic Granleese.

At over 500 square feet, the house’s green roof may be its most powerful-and most expensive-environmental statement. It cost $8,000 to waterproof, and $7,000 to landscape. Water from the roof feeds the toilet and the garden’s watering system, and the garden itself insulates the house and keeps gas bills low in winter. It also means there’s no need for any artificial cooling in the summer.

Inside, Fuscaldo was keen to avoid joinery, where possible. "What’s the point of building a sustainable house then filling it with chipboard?" he asks. And besides, Krien hates cupboards with doors, preferring to have things out in the open. So in the kitchen, the couple found an old workbench and refurbished it themselves to make counter space and a sink. "You don’t look at this corner and think, there’s a small kitchen," Fuscaldo says. "You think, there’s a beautiful piece of furniture."

Almost all the furniture in the house is recycled, or was picked up for free from the side of the road. Even the toilet was a gift from a friend.

"This house has an atmosphere already-we didn’t have to inject it, it came with it," Fuscaldo says. "We didn’t cover up the labor involved; we wanted to have the beauty of the handmade. And I wanted to make sure that we made a statement that architecture isn’t about the appliance or the joinery, or the kitchen; it’s about an atmosphere, a way of living. There’s this idea of materials becoming imbued with a story."

"Clients come to me, a lot of them, they’re not super-wealthy, and I can see where they can make more sustainable choices if they compromise on other things," he adds. "I’ve been bringing them here to show them that you don’t need that flashy kitchen; if sustainability is a priority, then try thinking of it in another way. It can be beautiful, and handmade. I’m trying to show that you can afford it, you just have to direct your money in a different way."