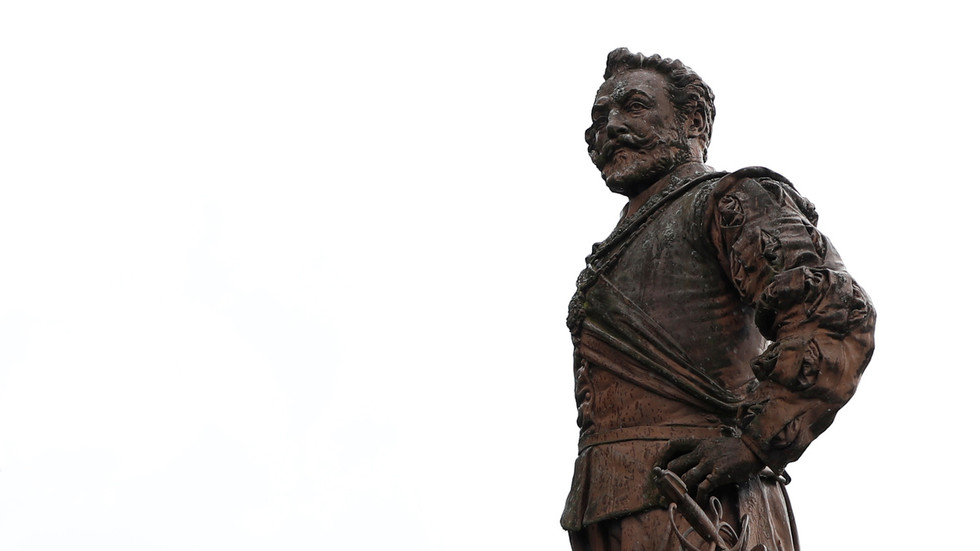 Woke-weary Brits have slammed a local council decision to rebrand a statue of national hero Sir Francis Drake, who defeated the invading Spanish Armada, to underline his involvement in “horrific slave trading expeditions.”

Late on Monday, the Telegraph and the Daily Mail reported that West Devon borough council had decided to erect a new informational plaque next to a statue of Sir Francis Drake to highlight the 16th century explorer’s connection to slavery.

Despite there being just one letter to support the proposal and 89 objections, the council agreed that a plaque detailing the less heroic aspects of Drake’s past must be erected by the monument to the esteemed naval commander in his hometown of Tavistock.

The inscription, as reported by the Daily Mail, highlights the “contrasts” of Drake’s life, first noting him as the first Englishman to circumvent the globe and as a defender of the country against the Spanish Armada.

However, it also notes that the Tudor explorer had a darker past. “He was also involved in several horrific slave trading expeditions. Furthermore, as a privateer he looted and plundered Spanish towns and ships in Europe and throughout their Empire in the Americas.”

Online support for the project appears even sparser, with almost all of those responding against the council’s move. Britons, sharing their two cents on Twitter, seemed infuriated, with many demanding people stop listening to the ‘woke’ minority.

One suggested that those who dislike British history should “bugger off to somewhere more to their pathetic liking.

Many people were keen to highlight Drake as a “national hero” who saved the country from invasion, against the odds, and was an outstanding explorer, insisting that his reputation should not be tarnished.

“Sir Francis Drake is a British hero who defeated the Spanish Armada, and a hero for saving our country and the Leftie Woke are trying to destroy our history,” one woman said.

Robert Poll from the Save Our Statues activist group also focused on Drake’s achievements, notably that of saving the country from the Spanish, and added “we shouldn't have to apologise for remembering that."

One said that woke Britons should “refrain from making judgements about a period of time that they could not even possibly comprehend.”

Another agreed, arguing that if the same path was followed, 99% of historical statues or buildings would need to be replaced around the world, or alternatively “these New Maoists could just grow up.”

Some also questioned what was happening to local democracy if only one resident actually supported the proposal. “Wokeitude actually outweighs voters,” they concluded.

Among the widespread condemnation of the plaque, one mischievously wrote: “nothing a screwdriver won’t fix.”

A few weren't bothered at all by the addition of the plaque. One questioned the explorer's hero status, complaining that "the rich record their own biased history, on behalf of their class, in both written and statuette form," while another said those objecting to the additional information aren't upset because it's inaccurate, but "because to them it feels unpatriotic."

This is not the first time Drake has been targeted for his darker past. During the Black Lives Matter protests in 2020, nearly 3,500 people signed a petition to remove a statue of the mariner from Plymouth. Citing that Edward Colston’s statue was torn down in Bristol, the petitioners deemed a similar fate should face Drake’s.

Drake is a perennial figure in the education of British youths, noted as an important leader in the fight to save the country from the invading Spanish Armada and an explorer, symbolic of an English renaissance during the Elizabethan era, often referred to as a Golden Age in the country’s history.