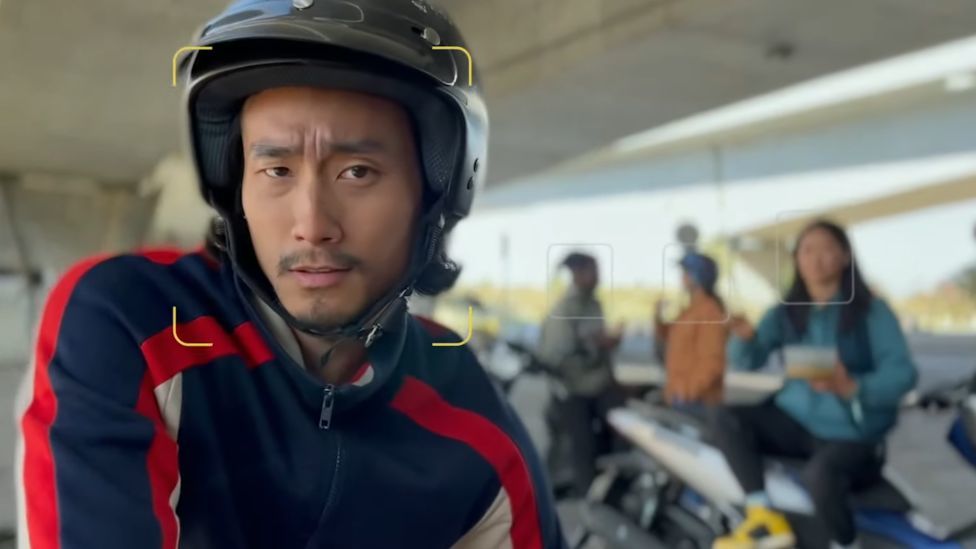 Apple has announced its new iPhone 13, which can film "portrait mode" videos with a depth of field effect.

The new cinematic mode "anticipates when someone is about to enter the frame" and shifts focus to them, Apple said - something known as "pull focus".

It is the only smartphone that lets users edit this effect after shooting, Apple boss Tim Cook said.

However, most other features on the new model were incremental updates over previous versions.

The event was also overshadowed by news of a new security flaw in Apple devices which could expose users' messages.

Apple released a security patch on Monday for the previously-unknown flaw, which could let attackers access its iMessage service without the user clicking on a malicious link or file.

The new iPhone includes a faster A15 chip, a brighter display, and a battery life of up to 2.5 hours longer, and comes in new colours including pink, blue, "midnight starlight" and red. 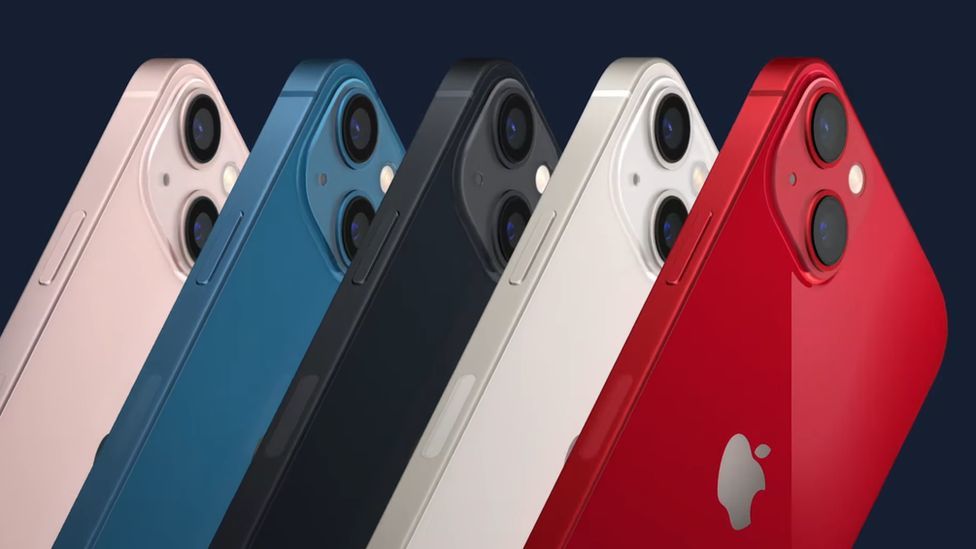 The new iPhone will also have up to 500GB of storage with its lowest available storage rising to 128GB from previous models' 64GB.

Apple was also keen to stress its green credentials, saying the phone used many recycled materials - including antenna lines made from plastic water bottles, it said.

The launch comes as buyers are keeping their phones for longer before upgrading. Investment firm Wedbush Securities estimates that around 250 million iPhone users have not upgraded their phones in 3.5 years.

Paolo Pescatore, an analyst at PP Foresight, said many have yet to experience modern features.

"While many will see some upgrades as incremental, there are millions of users who have yet to upgrade to 5G. Therefore, this so called 'supercycle' moment is still relevant," he said.

The 5G connectivity is only available on the iPhone 12, released last year, and the newly-announced models.

In the second quarter of this year, Apple shipped 25.9% of all 5G handsets in the world, according to analyst firm IDC.

Marta Pinto, senior research manager at IDC, said: "With the new portfolio, this number will grow and consolidate the dominance of Apple in that space."

"Not being the first [to launch a 5G phone] paid off."

The iPhone 13 Pro and Pro Max contain three cameras and what Apple calls "its most advanced camera system yet".

Its premium models include a Super Retina XDR display and ProMotion - which delivers adaptive refresh rates of up to 120Hz.

This allows for smoother scrolling, animations, and gameplay.

Apple has a reputation for innovation. But if this launch was anything to go by, that reputation is outdated.

Nothing especially new or visionary was announced here. The updates to its iPhone, Apple Watch and iPad feel conservative, uninspired, safe.

Barring a new improved cinematic camera (which to be fair looks good) these are iterative updates. Even the presentation, though slick, had no particularly memorable or creative moments. Rumours of more interesting updates, iPhones with satellite capabilities for example, turned out to be false.

"What a spectacular set of announcements," said Apple's Tim Cook - referring to products like the new iPhone 13, which looks almost identical to the iPhone 12.

Some had speculated that maybe Apple would stop numbering the new iPhone (13 being an unlucky number for some) - but no such radical move.

Still, Apple will sell a lot of these gadgets - they always do.

But look past the bombastic marketing and this was a pretty uninteresting launch - particularly from a company that likes to describe itself as innovative. 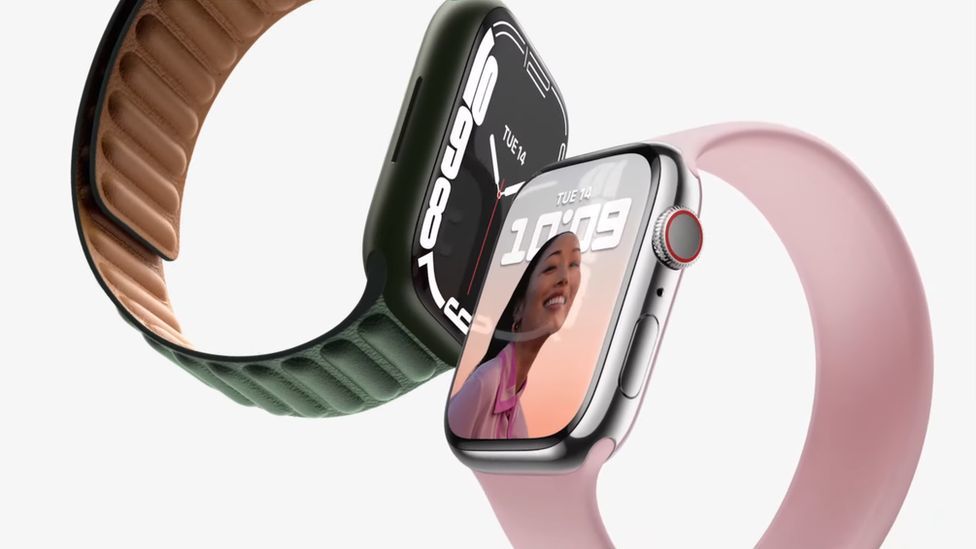 The Series 7 brings the first redesign to the watch since 2018, and will be slightly larger.

The new size can fit almost 50% more text on screen, and has a keyboard to input text. It is also dust-resistant for the first time.

But manufacture of the Apple Watch Series 7 could face production delays, reported Bloomberg.

Apple said the new model would be available "later this fall", whereas other products such as the new iPad and iPhone - announced at the same event - are available from next week.

Apple accounts for 47% of the global smartwatch market, according to research from CCS Insight.

He said he had expected to see a longer battery life, as "owners continue to clamour for smartwatches to last longer", but that was not announced - even if faster charging was.

"Despite these concerns, the Apple Watch continues to sell in record numbers and dominates the smartwatch market by a distance," he added. 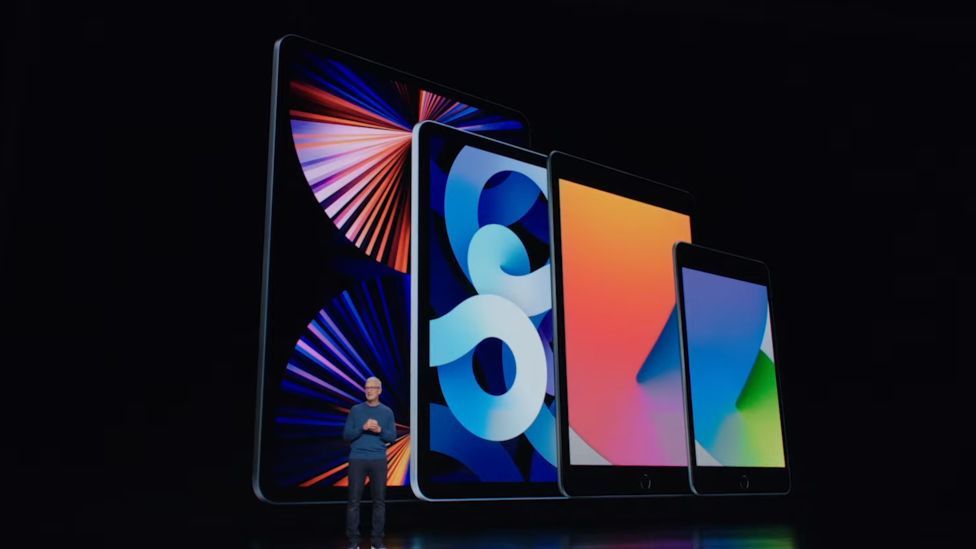 Apple has also launched a new version of its iPad. Tim Cook said its iPad sales had grown by 40% in the past year.

It will be powered by the A13 chip, with 20% faster performance from its previous iteration. Apple said this was up to "three times faster than the Chromebook".

Those cheap styles of laptop exploded in popularity last year as schools shut down during the pandemic.

A new iPad mini was also launched, with USB-C functionality, Apple pencil support and no home button - using a lock button on the top for Touch ID instead. Prices start at £479.