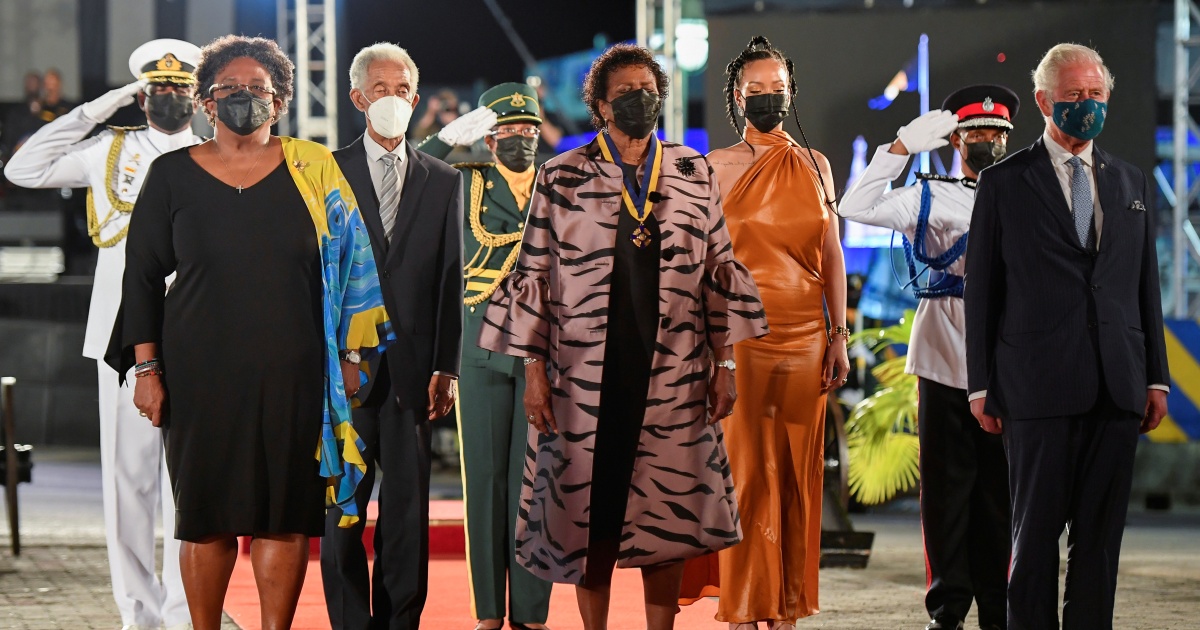 Barbados told the queen to take a hike, others should follow

Barbados has done what Canada and Australia – who remain wedded to the absurd idea that the queen means constancy and a near-mystical bond that binds faraway peoples – refuse to do: Grow up and leave ‘home’.
At a time when a stubborn virus has made much of life impossible, the people of Barbados have reminded us that we can still dance to the possible.

As a new year approaches, a weary world braves a familiar litany of sad, hard challenges that have combined to drain hope and joy from the present to beyond even the distant horizon.

But a small, sun-kissed eastern Caribbean island with a population of only 285,000, has rejected the prevailing pessimism, choosing to celebrate a rebirth of sorts that has broken through the persistent gloom like a sliver of much-needed optimism.

In a late evening ceremony on November 30 – brimming with quiet dignity and historical significance – Barbadians realised a dream long in the making and borne of the power of imagination and an inspiring commitment to self-determination.

Decades after declaring independence in 1966, Prime Minister Mia Mottley vowed last year to fulfil the pledge made by the country’s first Prime Minister Errol Barrow who told a visiting British minister that one day Barbados would “not loiter on colonial property past closing time.”

And, so, at midnight, the Royal Standard was lowered slowly, signalling the arrival of Barbados as a parliamentary republic, untethered finally from the last symbolic ties to a spent British monarchy that, for centuries, had imposed – by cruel force and intimidation – alien habits and traditions and inflicted such damage and harm.

As a 21-gun-salute reverberated through the warm night air, Dame Sandra Mason, the last governor-general, was sworn in as president – replacing Queen Elizabeth II as titular head of state – by the chief justice and took the oath of allegiance to the newly liberated country.

Hundreds of years of inhumane British rule that saw a once free nation disfigured and made – under whip – a brutal hub of slavery by white, rich, English-speaking invaders who plundered a distant island for profit, began to recede into memory.

Still, another white, rich Englishman, Prince Charles witnessed first-hand, Barbados’ proud passage from colony to full-fledged republic. For many, his presence was unwelcome since he embodied all that determined Barbadians had chosen to leave emphatically behind.

In an act of belated atonement, the heir to a fading, irrelevant throne, Prince Charles acknowledged the “appalling atrocity of slavery, which forever stains our history” and allowed that the “creation of this republic offers a new beginning”.

The Barbadian author and poet, Winston Farrell, captured the profundity of that “new beginning” in poignant verse.

“Full stop this colonial page,” Farrell told an overflowing audience gathered at Heroes Square in the capital, Bridgetown. “Some have grown up stupid under the Union Jack, lost in the castle of their skin.”

“It is about us, rising out of the cane fields, reclaiming our history,” he said. “End all that she mean.”

Barbados has done what Canada and Australia – who remain wedded to the absurd idea that the queen means constancy and a near-mystical bond that binds faraway peoples – refuse to do: Grow up and leave “home.”

Instead, like fretting children who cling to an apron for comfort and security, these timid members of the Commonwealth who pledge steadfast loyalty to a nice, ageing queen, prefer sentimentality over maturity.

The British monarchy is a useless farce, populated by wealthy, pedestrian celebrities, some of whom have been excommunicated for revealing to obliging interviewers that they would rather escape the fatuous “fairy tale” than continue to live a choreographed lie.

One “prince,” above all, represents exhibits A to Z of the squalid nature of a haughty, exhausted institution that, predictably, shields a pampered delinquent in its protective, velvety cocoon.

These days, Prince Andrew who, like his gilded kin, is supposed to be devoted to selfless public service – has mostly disappeared in the royal equivalent of witness protection. A grinning Prince Andrew was, however, pictured earlier this week riding with friends on the grounds of his ever-hospitable mother’s Windsor Castle home.

The furtive prince has been kept comfortably out of view because he faces stiff legal action brought by Virginia Giuffre who insists that, at 17, she was a “sex slave” throughout 2001 to Prince Andrew and other privileged dilettantes and confidantes of disgraced and deceased American financier-turned-pimp, Jeffrey Epstein.

Prince Andrew’s “people” have, de rigueur, painted his persuasive accuser as a money-grubbing harlot who is suing the queen’s son “to achieve another payday at his expense.”

This is evidence, I gather, of Prince Andrew’s solidarity with the #MeToo movement – smear a brave woman for daring to challenge the omnipotent power of the realm – and, apparently, the reigning monarch (that nice, old lady) approves.

Not done maligning the victim, Prince Andrew’s lawyers now claim that the New York law that Ms Giuffre relied on to launch her lawsuit is unconstitutional because, as a 17-year-old, she was old enough to provide consent and, as such, could not, at that time, be deemed a minor by the state.

I would like to think that Prince Andrew’s sick defence would not only give sensible monarchists pause to consider his wanting character, but also to question the queen’s egregious decision to offer her insolent son quiet haven amid the scandal and sordidness that is enveloping him and, by extension, Buckingham Palace.

Blinded, as they are, by the silly fantasy that royal pomp and circumstance sustain, they will, no doubt, continue to look conveniently the other way to avoid confronting the truth about a monarchy that is slipping deeper into disrepute and triviality.

The travelling circus, known, as “The Firm” is kept alive with the eager help of Britain’s nostalgic and rancid tabloid press and slightly more polished television and movie producers who try, ad nauseum, to give the whole pretty facade the patina of purpose and heft.

Ages ago, wise Barbadians understood that it was, and remains, a white-man-made mirage. In time, they resolved to rid themselves of an archaic, affluent family whose ancestors built their riches, in part, by conquering then enslaving their beloved homeland.

Last month, Barbados told the queen, and her coddled princes and princesses, politely, of course, to take a well-deserved hike.

If only Canada and Australia, among many starry-eyed nations, had the will and wisdom to follow its example.