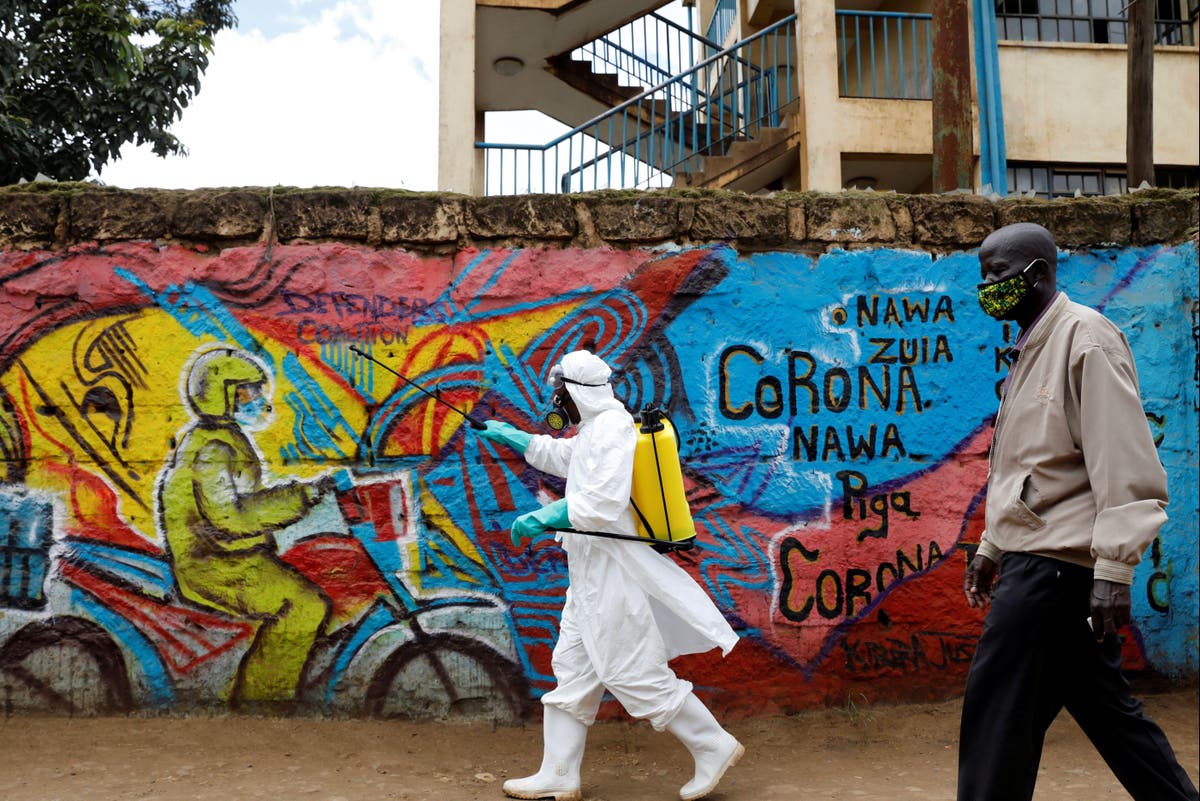 Huge parts of the world are getting left behind, remaining unvaccinated - here, global thought leaders say we need to step up fast

Every day, when Mandy Malambo goes to work at the hospital where she is a nurse in Zambia, she runs through the same worst case scenario in her mind. “You think, what if today is the day I contract Covid?” Malambo is lucky, she has had one dose of the vaccine, but most of her colleagues are unvaccinated. In Zambia just 1.1 per cent of the population have had both jabs, and Covid cases are rising. It is a stark contrast to the UK, where more than half of the population have had two doses of the vaccine and we are tentatively starting to think about a post-pandemic future. Focusing on the positive is tempting but look beyond the UK and the pandemic is still raging. Last week, there were four million new cases of Covid across the world, and many of them in are countries where people have not been vaccinated. Nearly 70 per cent of people worldwide are yet to receive a single dose of the vaccine and only 1.2 per cent of people in low-income countries have received at least one dose.

Bill Gates, who is working through the foundation he co-chairs to address this vaccine apartheid, says urgent action is needed. “As long as there are large pockets of unvaccinated people — either at home or abroad — we risk continued surges and additional variants that could put us all at risk. The only way to get out of the cycle of recovery and relapse is to make vaccines available to everyone as quickly as possible.” In other words, if we don’t look at Covid globally, it is more likely to mutate and be less responsive to vaccines — so we face a battle of variants versus vaccines. Meanwhile, the IMF and the World Bank have warned that if the vaccine is not shared out more equally, international trade and travel will not get back to normal and the global economy will continue to suffer.

The WHO is aiming for 10 per cent of every country’s population to be vaccinated by the end of September and estimates at least 60 to 70 per cent of the world needs to be inoculated to reach “global immunity” — but how realistic is this? It is not that there is a shortage of vaccines — in the UK, for example, we have more than our population needs several times over. It is more that they are not being shared equally or fast enough, compounded by the fact that there were early problems with supply which affected Africa — leading to calls to share patents and enable Africa to manufacture the vaccine.

“We need more high-income countries to share vaccine doses faster,” says Gates. “And more funding to buy doses for lower-income countries for 2022 and beyond. As the volume of doses increases toward the end of the year, we need to support countries so they are ready to receive and administer them as quickly as possible.” The race to provide booster shots in the West, with Germany and France already planning them, isn’t helping, putting pressure on supplies the developing world. The WHO is calling for a global moratorium on boosters until enough people across the world have had two doses of the vaccine.

"As long as there are large pockets of unvaccinated people — either at home or abroad — we risk continued surges and additional variants that could put us all at risk. The only way to get out of the cycle of recovery and relapse is to make vaccines available to everyone as quickly as possible"

Covax, a UN-backed alliance of international health bodies and non-profits, was set up last year to try to prevent the problem we now face and ensure that poor countries received vaccines as quickly as rich ones. However it has struggled, with one of the problems being that richer countries are paying premiums to get vaccines. In January, Covax promised to deliver 100 million doses by the end of March but that figure currently stands at less than 50 million.

Strive Masiyiwa, the African Union Special Envoy to the African Vaccine Acquisition Task Team, has criticised Covax and says the solution is to let African countries manufacture the vaccine themselves, licensing production in Africa and supporting areas to get the right equipment to make and distribute the vaccine rather than doing piecemeal contract deals. “The fact is, it’s not about sharing. It’s about allowing us access to production. Loosen contracts so that the supply capacity can be released to other nations; that is all we ask.”

There was a promise made at the G7 to share 870 million additional doses but this is “a token trickle”, says Robert Yates, Head of the Centre on Global Health Security at Chatham House. “The performance of the G7 has been pathetic,” Yates continues. “There was nothing about funding or the tech transfers we need around the world to make it easier to roll-out the vaccine. This is realpolitik — politicians are putting the lives of their own populations first, which is justified for high risk groups, but now we risk vaccine apartheid. It is to the WHO’s credit that they have called the UK and the US out on this, as we give them funding. But it is inefficient and immoral that we are thinking about vaccinating 16 and 17-year-olds before health workers in other countries.” Yates adds: “There is not sufficient public outrage, people are not demanding leaders roll-out the vaccine around the world.”

There are fears that we will see a repeat of what happened with HIV and Aids, where it took a decade to make drugs to combat the disease widely available all over the world, or swine flu, where rich nations bought the vaccine leaving poorer ones suffering. “This rampant nationalism doesn’t augur well for other existential threats to humanity,” says Yates. “Where does it lead us on issues like climate change where we need to collaborate on a global scale?”

"This rampant nationalism doesn’t augur well for other existential threats to humanity. Where does it lead us on issues like climate change where we need to collaborate on a global scale"

Will Hall, Global Policy and Advocacy Manager at The Wellcome Trust breaks down what is needed into three areas: “Bold leadership, dose sharing to go much faster and to Covax while trying to build supplies, and funding.” A partnership has been set up to get the vaccine to those who need it, called the Access to Covid Tools Accelerator, but it has a funding gap of $16.6 billion this year.

Leadership too has been “lacking”, says Tony Blair , who has set out how we could vaccinate the most vulnerable strategically, through his Institute and the Global Health Security Consortium. “The scientific and medical progress which we’ve seen in response to the pandemic has not, sadly, been matched by a similar degree of leadership in the international community, though that may be changing,” he says.

But dispatching vaccines is not enough. “We need to maximise the supply; co-ordinate supply to countries which have the ability to use them; and strategically vaccinate key populations to minimise mortality and transmission and maintain vital services. Countries need our support to grow their capacity to deliver vaccines, so they are able to get to them into arms as efficiently as possible.”

Getting the vaccine to the people it needs to go to is a huge challenge. Pfizer, for example, must be kept at low temperatures and some African officials worry that their electrical grids could be overwhelmed by having that many freezers. In Chad, there is only the capacity to distribute Pfizer in major cities.

Labour MPs including Emily Thornberry sent our Government a 10-point plan to increase production and distribution in May but it has yet to see action. “It’s a catastrophic failure of global leadership,” says Thornberry. “We’re trapped in a cycle. There are billions of unvaccinated people, so new variants spread throughout the world, all the attention switches back to America and Europe, nothing gets done about the poorer countries, and the cycle begins again. The only way to break it is a massive increase in production and distribution.”

There is a another opportunity this year for leaders make commitments on the vaccine, at the G20 in October. “Let’s hope they pick up the ball where the G7 dropped it,” says Yates. “It’s to our shame that we aren’t taking vaccinating the world more seriously.” Malambo is hopeful that the comments of figures like Gates means that the world is starting to listen. “Now we need to spread the word about the benefits of the vaccine to everyone.”