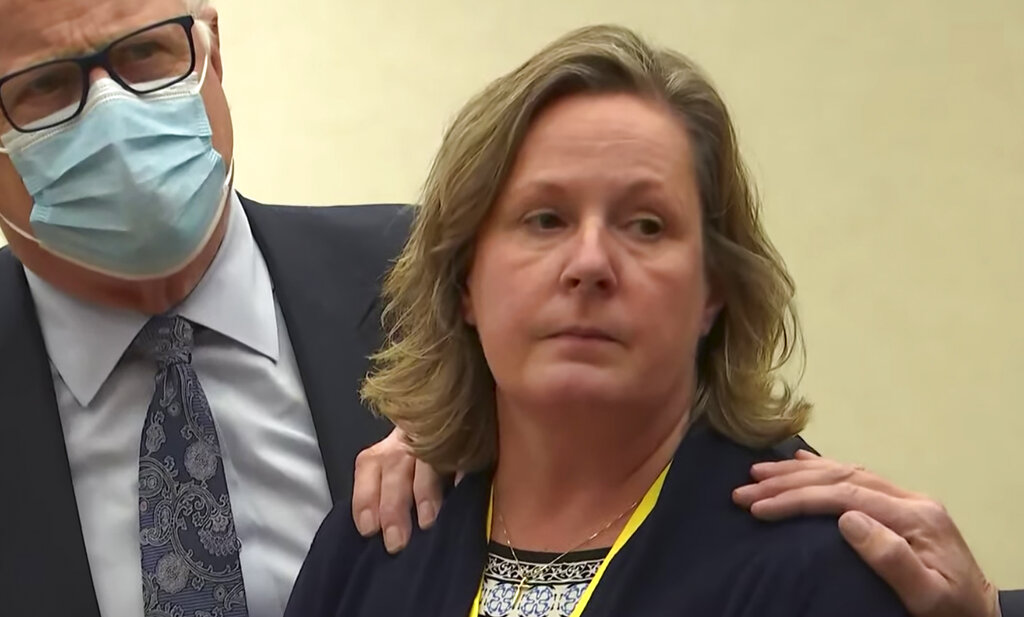 Former suburban Minneapolis police officer Kim Potter has been sentenced to two years in prison for first-degree manslaughter in the killing of Daunte Wright, an unarmed Black man at a fatal traffic stop in April 2021.

Potter said she had intended to shoot him with her Taser.

Judge Regina Chu said Potter must serve at least 16 months in prison and the rest of the sentence on supervised release and gave her credit for 58 days served since being found guilty in the killing in December.

Potter had faced a potential seven-year sentence for her conviction on first-degree manslaughter in the shooting. She was also convicted of second-degree manslaughter, but was sentenced only for the more serious charge in accordance with state law.

“A 26-year veteran police officer made a tragic error by pulling her handgun instead of her Taser,” Chu said in sentencing Potter. “She was acting in the line of duty in effectuating a lawful arrest.”

Nevertheless, Potter was “reckless” and there should be some “accountability”, Judge Chu said in emotional remarks on what she called one of the “saddest cases I have had in 26 years on the bench”.

Police had pulled Wright over for having expired licence tags and an air freshener hanging from his rear-view mirror. Wright had an outstanding warrant for a weapons possession charge. As officers tried to arrest him, he attempted to drive away. In that moment, Potter shouted several times that she was going to use her Taser on Wright, but she had her gun in her hand and fired one shot into his chest, killing him.

The shooting sparked several days of demonstrations outside the local Brooklyn Center, Minnesota, police station marked by tear gas and clashes between protesters and police. Wright’s death became another high-profile case in the Black Lives Matter movement that has swept the United States since the killing of George Floyd in nearby Minneapolis in May 2020.

Speaking before the sentencing, the mother of Daunte Wright said on Friday she would never be able to forgive the former suburban Minneapolis police officer who had shot and killed her son.

Addressing the court during Friday’s hearing, Katie Wright said she would only refer to Potter as “the defendant” because Potter, who is white, only referred to her 20-year-old son as “the driver” at trial.

“My life and my world will never ever be the same again,” she said.

Other Wright family members offered testimony of their emotional pain, grief and loss at his death.

Potter gave a short and tearful statement at her sentencing, apologising directly to the Wright family.

After handing down the sentence Chu acknowledged “There will be those who disagree with the sentence. That I granted a significant downward departure does not in any way diminish Daunte Wright’s life. His life mattered.”

Thomas Bowers, a lawyer for Wright’s family, expressed disappointment after seeing only a 24-month sentence given to Potter. “It’s lenient,” he said.

Wright’s mother, Katie Wright, said after the sentencing that Potter “murdered my son”, adding: “Today, the justice system murdered him all over again.” 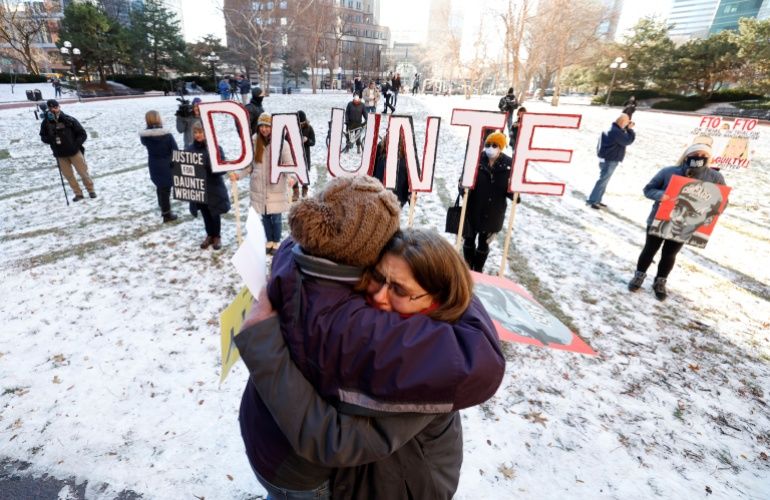 People react to the outcome in the manslaughter trial of Kimberly Potter, the former Minnesota police officer who killed Black motorist Daunte Wright after mistaking her handgun for her Taser during a traffic stop

Potter was sentenced only on her most serious charge of first-degree manslaughter, which had carried a presumptive penalty of just more than seven years in prison. The defence had asked for a lesser sentence, including one of probation only.

Prosecutors had argued that aggravating factors warranted a sentence above the guideline range of about seven years in prison. They said Potter abused her authority as an officer and that her actions caused a greater-than-normal danger to others.

In handing down a lesser sentence, Chu rejected those assertions. The judge said prosecutors had not proved Potter had endangered bystanders and other officers, nor that she had abused her authority as a police officer.

Defence lawyers had argued at trial that Wright was the aggressor and that he would be alive if he had obeyed commands. They argued Potter has no prior record, was remorseful, has had an exemplary career and has the support of family and friends. Her risk of committing the same crime again is low.

“This is beyond tragic for everybody involved,” defence lawyer Paul Engh told the court at Friday’s hearing, arguing that Potter should be sentenced to probation.

“This was an unintentional crime. It was an accident. It was a mistake.” 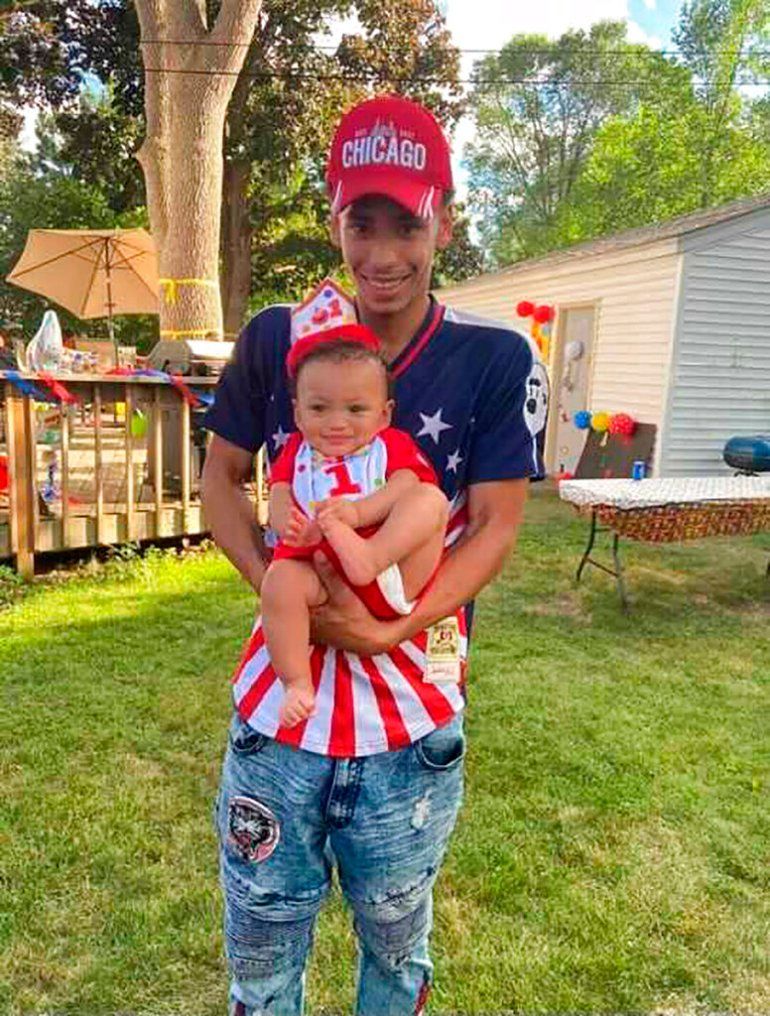 Daunte Wright and his son, Daunte Jr, at his first birthday party. Wright was killed when Kim Potter, the former suburban Minneapolis police officer, confused her handgun for her Taser

Engh said Potter was willing to meet with Wright’s family to apologise and give lectures to law enforcement groups on weapons confusion.

“There is no question that officer Potter is extremely remorseful,” Chu said.

In Minnesota, it is presumed that inmates who show good behaviour will serve two-thirds of their sentence in prison and the rest on supervised release, commonly known as parole.

Because she is a former police officer and would be at risk of assault if held in general population, Potter has been held in isolation at the state’s women’s prison in Shakopee since her guilty verdict.