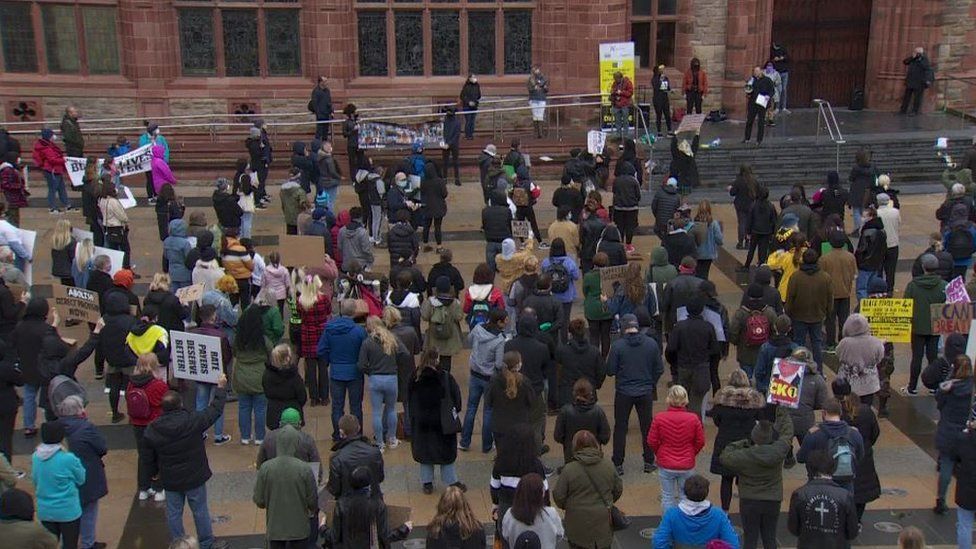 Fines issued at two Black Lives Matter protests by the Police Service of Northern Ireland (PSNI) are set to be refunded.

The fines relate to protests on 6 June 2020 in Belfast and Londonderry.

The PSNI said it would ask the Northern Ireland Courts and Tribunal Service to refund the fines and cancel any outstanding warrants.

It is understood the request relates to 72 "COV1" (£60) penalty notices issued at Custom House Square in Belfast and Guildhall Square in Derry on 6 June 2020.

In June of this year, it emerged that 14 people reported to Northern Ireland's Public Prosecution Service (PPS) after Black Lives Matter protests in June 2020 would not be prosecuted.

They were referred to the PPS for potential breaches of Covid-19 regulations.

The PPS had said there was "no reasonable prospect of conviction for any offence".

Last year, the Police Ombudsman found justification in claims the handling of the Black Lives Matter protests by the PSNI was unfair and discriminatory.

A further complaint of race discrimination is being investigated.

'We've not always got the balance right'

On Tuesday, DCC Hamilton said he had written to the health minister "to inform him of our intention to request the Northern Ireland Courts and Tribunal Service to refund paid fines and cancel any outstanding warrants issued at two Black Lives Matter events in Londonderry/Derry and Belfast on 6 June 2020".

"Against a backdrop of an unprecedented health crisis and rapidly changing legislation, our objective has always been to help slow the spread of the virus to keep people safe," he said.

"Balancing this against our obligation to safeguard other important rights - such as the right to peacefully protest - has not been easy or comfortable.

"We have previously accepted that as a service, we have not always got that balance right.

"We believe we erred in our use of penalty notices at these two events and are taking this action to correct that error."

Mr Hamilton said the PSNI was "working to implement the lessons learned from this period and are determined to improve relationships and build confidence and trust in policing among all communities in Northern Ireland".