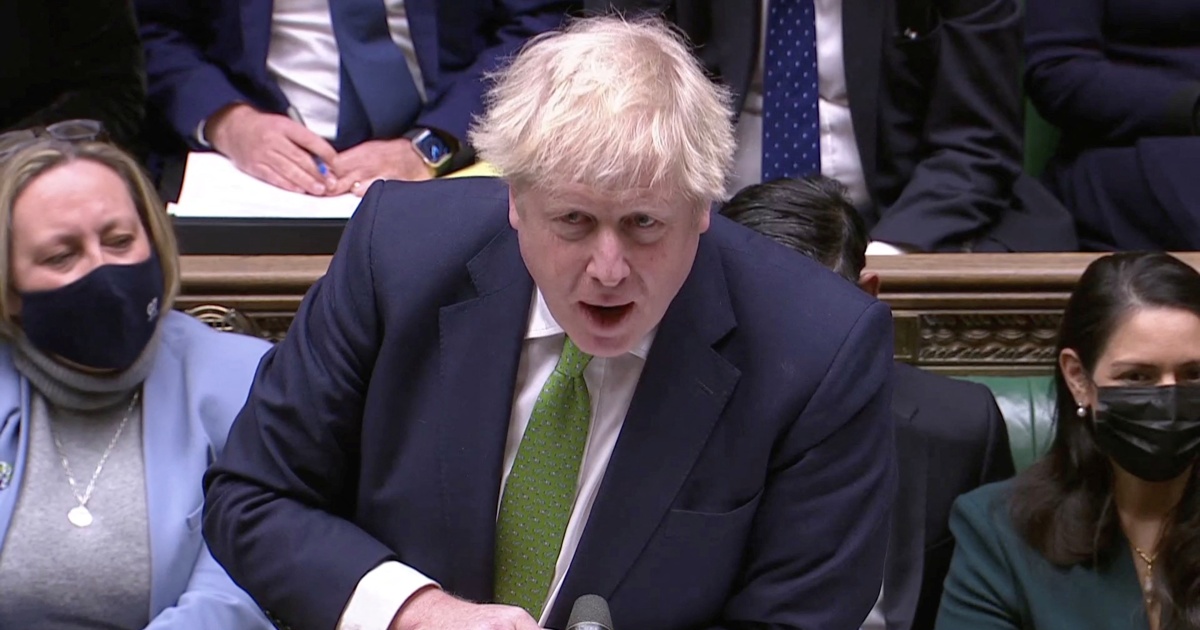 British Prime Minister Boris Johnson is fighting to save his premiership after a member of his party defected over accusations he and his staff defied lockdown rules, and as an internal Conservative rebellion reportedly gathered pace.

He crossed the lower chamber House of Commons to take a seat on Labour’s benches, a symbolic departure made during the weekly Prime Minster’s Questions (PMQs) session.

“I can no longer support a government that has shown itself consistently out of touch with the hard working people of Bury South and the country as a whole,” he said in a statement.

Asked by an opposition Liberal Democrat lawmaker during PMQs whether it was now time to resign, Johnson replied: “No.”

The Conservative Party leader, who is alleged to have broken social distancing rules in 2020 by attending a party, said people should await the outcome of an inquiry led by a senior civil servant into whether such gatherings were held in breach of COVID-19 restrictions.

The inquiry’s conclusions, expected to be published by next week, will analyse reports of several events that reportedly took place while most other Britons fastidiously followed measures aimed at stemming the virus.

Al Jazeera’s Paul Brennan, reporting from London, said Johnson was “on the defensive but not subdued” during PMQs despite Wakeford’s decision and repeated questioning about the so-called “PartyGate” scandal.

“He was very at pains to say his was a competent government that had done well with the pandemic, but he was put under enormous pressure not just by Labour leader Keir Starmer but also by people on his own side,” Brennan said.

Wakeford’s defection heaps yet further pressure on Johnson, who a week ago admitted to attending a garden party at Downing Street during a coronavirus lockdown in May 2020.

Since then, it has emerged that two more gatherings were held at Downing Street on April 16, 2021, in breach of restrictions.

The April parties, which Johnson did not attend, took place the evening before Queen Elizabeth II sat alone as she buried her late husband, Prince Philip, in strict compliance with the virus rules.

A string of other rule-breaking gatherings have been reported, thrusting Johnson into the severest crisis of his premiership since he won a landslide election victory little more than two years ago on a pledge to “Get Brexit Done”.

He has apologised for the parties and said that he was unaware of many of them.

In what critics have called a move to quell the Britons and politicians who are sceptical of COVID restrictions, Johnson scrapped all measures on Wednesday; working from home is no longer being encouraged, mask-wearing is not mandatory, and COVID passes will not be needed for large events.

Johnson told lawmakers that the restrictions were ending because government scientists believed it was likely that the surge of infections prompted by the highly contagious Omicron variant “has now peaked nationally”.

Meanwhile, as public anger rises, some Conservative legislators are reportedly trying to trigger a no-confidence vote.

Under the Conservatives’ rules, for such a vote to take place, 54 legislators must write letters to the head of their parliamentary group demanding a ballot.

A handful of Conservative politicians have called for Johnson to quit, while more have criticised him. Several dozen are understood to have submitted letters.

If Johnson lost a confidence vote, it would lead to a leadership challenge that would by default determine who replaces him as prime minister.

Leading contenders to potentially replace Johnson are thought to include Chancellor of the Exchequer Rishi Sunak, 41, and Foreign Secretary Liz Truss, 46.