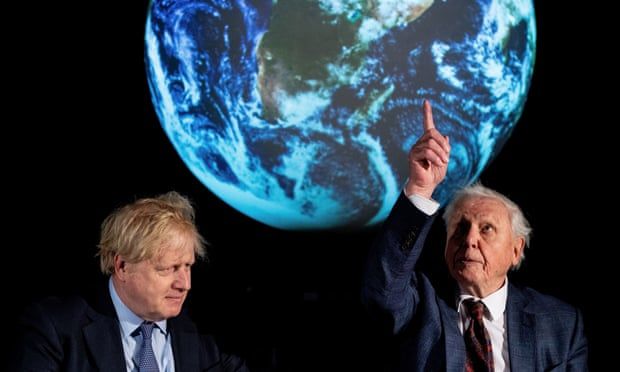 The Labour leader said there is already “dystopia” all around caused by climate breakdown, but Johnson’s ambition to tackle the scale of the crisis is irresponsibly small.

The UK will host the Cop26 summit in Glasgow this November, where countries must set out plans for drastic cuts in greenhouse gas emissions for this decade, to avoid catastrophic and irreversible changes to the climate.

“As host of the summit, the world is looking to Britain to deliver,” writes Starmer in today’s Guardian. “We cannot afford to miss this moment, but I fear we will.”

The government was off-track to meet its own climate targets, while ministers scrapped measures to reduce emissions such as the green homes grant insulation scheme, and were allowing high-carbon development, such as a potential new coalmine, Starmer wrote.

The prime minister was delivering “a cabaret of soundbites” rather than the global leadership needed, he charged.

“All over the world, unusual weather events show that dystopia is not on the horizon. It is here today, all around us,” he wrote.

“At this vital moment, our prime minister is missing in action, while his climate spokesperson is busy advising people to freeze their leftover bread. When the issues at stake are so large, it really is irresponsible for the response to be so small.”

Downing Street has faced mounting criticism over its conduct of Cop26, the outcome of which some observers described as “hanging in the balance”. The government’s host year kicked off with scientists chastising ministers over plans for a new coalmine in Cumbria, while diplomats despaired over the decision to slash overseas aid, considered a disastrous signal to other countries as a crucial goal of Cop26 will be raising $100bn a year for the developing world.

The prime minister’s spokesperson for Cop26, Allegra Stratton, has also made headlines recently, appearing to reject electric cars, suggesting people could join the Green party, and saying the government’s 2050 net zero emissions target was too far off. Diplomatic eyebrows were also raised when John Kerry, the US climate envoy, made a major speech in Kew Gardens that no government minister attended.

John Sauven, executive director of Greenpeace UK, said: “Boris Johnson has mastered the dark art of setting bold long-term targets but ducked implementing policies that will make a difference. He needs to start delivering on the tough choices needed for a successful low-carbon economy. As host of the Glasgow summit, the world’s eyes are on us to prove there is a solution to the climate emergency. If we fail, the summit fails. So far the omens are not good.”

Starmer told the Guardian in an interview that the impression was one of a government long on climate rhetoric but short on action, and hampered by Johnson’s own character. “[Success at Cop26] requires leadership, diplomacy and coalition-building. But the prime minister’s reputation on the global stage is not good – he is known for rule-breaking, rather than coalition-building,” he said.

Starmer said he was moved to intervene as he began a two-day visit to Glasgow, to meet members of a local youth forum and Scottish Labour leader Anas Sarwar, to discuss young people’s perspectives on the climate crisis and Labour’s plans for green investment. “Sitting by and watching this government fail to lead would be the worst possible thing Labour could do. If we can goad them into stronger leadership that would be better for Britain and the planet.”

“He [Johnson] should be leading from the front,” said Starmer.

He said Labour – like US president Joe Biden – would have more credible and serious ambition, with a £30bn investment in a green recovery from the pandemic.

Whitehall insiders said the government was working hard behind the scenes on the talks, with Cop president-designate Alok Sharma taking on a punishing travel schedule to key countries. Last week, ministers from more than 50 countries met in London, with some progress on forging relationships among countries that have been unable to meet in person for more than 18 months, but disappointment on efforts to make a bold commitment to phase out coal.

Some major countries – including China and India – have also yet to produce plans for their emissions cuts to 2030, a crucial goal for Cop26.

Some participants in the talks praised the government for staying firm on its target of holding global heating to 1.5C, and said there was still time to craft a deal that would set the world on a path to meeting the 2015 Paris agreement, and staving off the worst ravages of climate breakdown.

Early next week, amid recent extreme weather around the world, the stakes for Cop26 will be raised higher still, when scientists produce a long-expected landmark report on the climate. The Intergovernmental Panel on Climate Change is expected on Monday 9 August to deliver the starkest warning yet that the world is heading for widespread devastation unless emissions are brought down sharply in the next decade.
#Boris Johnson  #Joe Biden  #Johnson