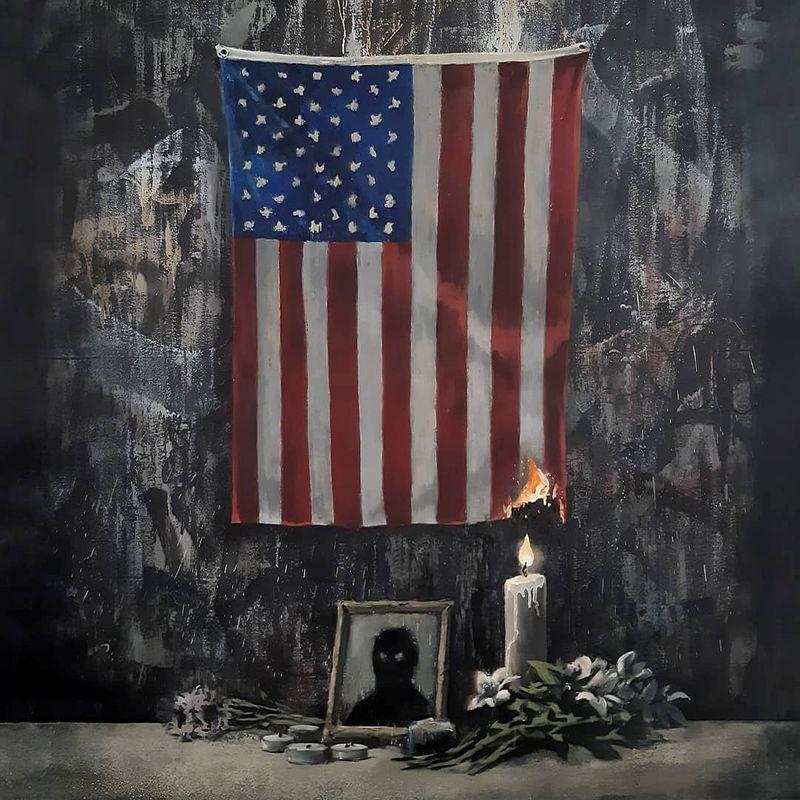 Street artist Banksy has revealed a new artwork on his Instagram account in support of the Black Lives Matter movement and the protests taking place across the world following the murder of American citizen George Floyd by 4 policeman.

Inspired by the widespread protests in America following the death of George Floyd, the Banksy painting features a vigil scene with a candle setting fire to the American flag hanging overhead.

Street artist Banksy has revealed a new artwork on his Instagram account in support of the Black Lives Matter movement and the protests taking place across the world following the death of American citizen George Floyd.

The artwork appeared as thousands of people gathered in London and other cities around the world to protest the May 25 killing of George Floyd in Minneapolis, where a white police officer detaining him knelt on his neck for nearly nine minutes.

“People of color are being failed by the system. The white system,” Banksy wrote in a short statement that accompanied the image on the social media platform Instagram.

Banksy likened racism to a broken pipe flooding a downstairs apartment, and said the downstairs occupants would be entitled to break into the apartment upstairs to fix the problem.

“This is a white problem. And if white people don’t fix it, someone will have to come upstairs and kick the door in,” Banksy wrote alongside the image.

No stranger to creating art that is politically charged and reflects some of the most pressing issues and injustices of our time, the artist, whose real identity remains unconfirmed, published the artwork on the day that mass protests were planned across the UK.

Banksy frequently chooses topical themes for his artworks, which are normally stenciled on walls.

Last month, he showed a young boy choosing a nurse as the superhero he wants to play with over Batman and Spiderman, in a new artwork to encapsulate the gratitude Britons have felt toward the country’s National Health Service during the coronavirus crisis.