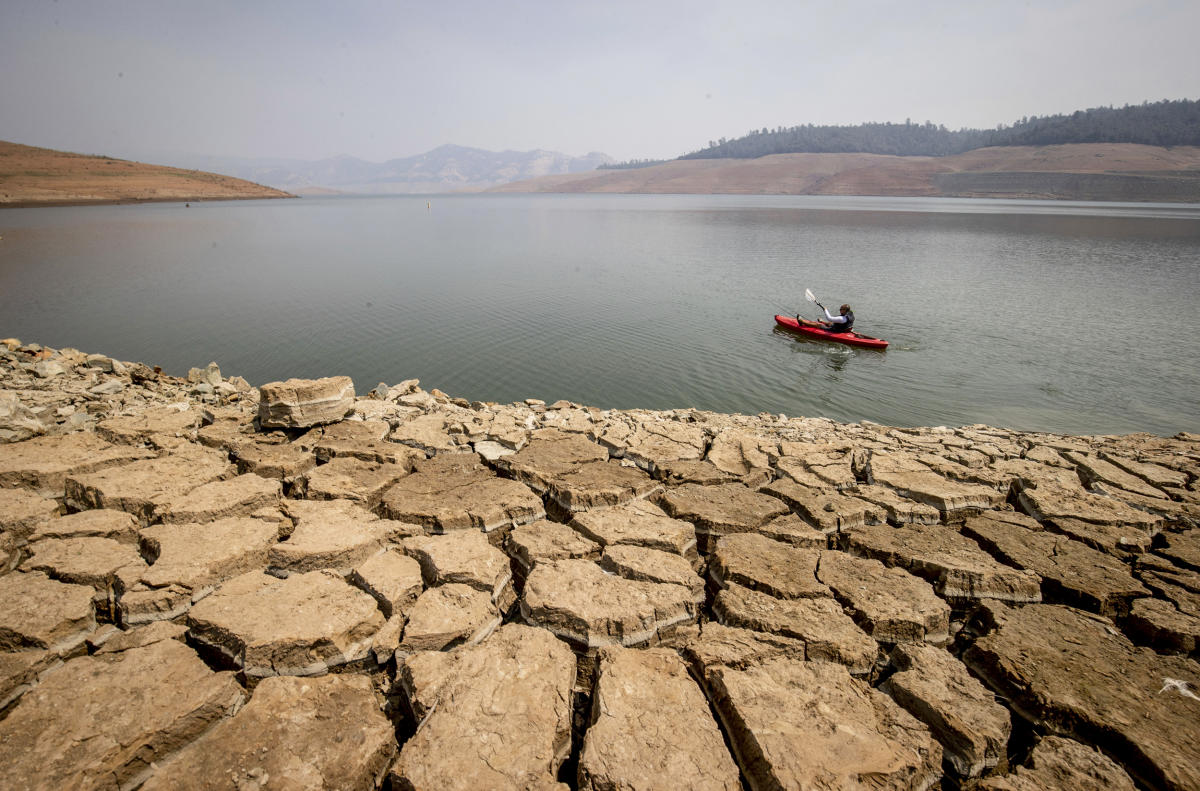 California has been hammered with rain. It may not be enough to reverse its drought.

California is a land of booms and busts. Nowhere is that clearer than in its rivers, trickling a month ago during drought and now suddenly swollen as fearsome storms pummel the state.
“There’s no Goldilocks moments in California,” said Jeffrey Mount, a senior fellow at the Water Policy Center of the Public Policy Institute of California. “It’s either incredibly wet or incredibly dry.”

Six powerful storms supercharged by atmospheric rivers have struck the state since Christmas, according to State Climatologist Michael Anderson. Three more are expected in the coming days. At least 17 people have died, mudslides have poured onto roadways, and hundreds of thousands have lost power at times.

And despite all that water, state leaders are bracing for the possibility of more drought this summer in parts of the state.

“California is experiencing — coincidentally — both a drought emergency and a flood emergency,” said Karla Nemeth, the director of the state Department of Water Resources, adding that she attributed the situation to the impacts of climate change.

The situation has revealed a tension at the heart of climate concerns in the West: Communities aren’t getting precipitation when they most need it. And much of the infrastructure meant to help alleviate California’s too-wet/too-dry cycles — its extensive reservoir system — was designed long before there was recognition that climate change could intensify droughts and storms.

Now, communities balance dueling priorities. They’re desperate to store as much water as possible in reservoirs for hotter, drier summers, but some have been pressed to release some of the recent rainwater to manage flooding that could be juiced by a warmer atmosphere.

Weeks of intense rain still haven’t filled the state’s largest reservoirs, which reveals how severely the drought withered its water supply. Overall, much of the precipitation that has fallen during the atmospheric river storms won’t be stored for summer use.

“The vast majority of the water on the land is running off,” Mount said. “There is no economically viable way to store it.”

California is defined not only by its yearslong drought cycles, but also by its annual dry season, which runs roughly from May to September.

The time of highest demand for water — late spring and summer — is when nature provides very little precipitation to California.

That leaves the state’s reservoirs — in groundwater, snowpack and a system of dams — to fill the seasonal gap and help the state ride out prolonged stretches of drought.

“California would be a shell of itself if it was not for water storage,” Mount said. “We wouldn’t exist here.”

In a normal year, snowpack can provide about a third of California’s water supply. Groundwater typically accounts for about 40% to 60% of the water supply, depending on how dry conditions have become.

California counts on a system of about 1,400 human-made surface reservoirs and thousands upon thousands of miles of levees to manage surface water. About two dozen large reservoirs are responsible for more than half of the overall storage.

The reservoirs are designed not only to store water, but also to manage streamflows during the periods of heavy rainfall or snowmelt so downstream communities don’t flood.

“We are in this constant tension,” Mount said. “You want to capture every drop you can. However, these are multipurpose dams — they also have to do flood control. To do flood control, you want dams as empty as possible.”

And with climate change, both wet and dry weather patterns are growing more.

“With the warmer climate we’ve had the last decade or so, we’re seeing generally less snowpack than we’re used to, and we’re seeing it melt off faster, and we’re seeing more evaporation off the watersheds,” said Jay Lund, the vice director of watershed sciences at the University of California, Davis.

Human-caused warming has increased the risk and severity of drought, leading to water shortages, more wildfire risk and low streamflows that endanger wildlife, according to research published in the Proceedings of the National Academy of Sciences

A warmer atmosphere also allows the atmospheric river storms, which are responsible for as much as 50% of precipitation in some parts of California, to convey more water.

“They get larger, which helps them, when they cross over a location, to last longer,” said Marty Ralph, the director of the Center for Western Weather and Extremes at the Scripps Institution of Oceanography, whose research suggests that the vast majority of flooding in Western states is due to such storm cycles and that climate change will increase the severity of flood damage.

During the recent storms, extreme drought has buffered some impacts of intense rainfall with plenty of space in the state’s largest reservoirs, which have withered under drought.

Lake Oroville has a capacity of about 3.5 million acre-feet. Before the series of atmospheric rivers, it was storing less than 1 million acre-feet of water. (An acre-foot is roughly equivalent to half an Olympic-size swimming pool.)

Since the beginning of December and the arrival of the storms, water levels have risen by about 650,000 acre-feet, Molly White, the water operations manager for California’s State Water Project, said Tuesday. Three more forecast storms are expected to raise levels by 400,000 to 500,000 more acre-feet.

“Our two biggest reservoirs, Shasta and Oroville, were empty,” Mount said. “That’s greatly reducing the downstream impacts of all this precipitation.”

But smaller reservoirs have been unable to store all the runoff. Folsom Lake, Lake Mendocino and Millerton Lake are among reservoirs that have had controlled releases, sending water downstream that could feel precious this summer but is a burden now.

Much of California’s reservoir infrastructure was designed decades ago, when climate change wasn’t a pressing concern and weather forecasting was less powerful. Some of it is in poor condition.

As of last spring, state dam inspectors rated 112 California dams as “less than satisfactory,” and that meant that 41 reservoirs were reduced in capacity. The problems cost California about 350,000 acre-feet every year, according to the state’s water supply strategy.

Warming winters have California’s snowpack on a frightening course. If global greenhouse gas emissions don’t drop, the Sierra Nevada could have “episodic low-to-no snowpack” winters by the late 2040s, meaning more than half of a mountain basin’s snow is gone for five consecutive years.

Meanwhile, the state continues to rack up groundwater deficits. In the Central Valley, Californians extract about 2 million acre-feet more than what returns to the ground, on average, every year, Lund said.

The state is exploring a slew of potential solutions.

Most dam operators are bound to follow rules developed when many of those dams were constructed in the 1950s, the 1960s and the 1970s and when weather forecasting was poor.

“Almost all reservoirs do not allow the use of forecasts,” said Jeanine Jones, the drought manager at the state Department of Water Resources.

A new approach, called Forecast-Informed Reservoir Operations, allows dam operators to use weather tools to help determine how much water it saves or releases.

In a pilot project at Lake Mendocino, the strategy has allowed dam operators to save as much as 20% more water as spring approaches, said Don Seymour, the deputy chief engineer at the Sonoma County Water Agency.

Seymour said the strategy helped the agency avoid draining Lake Mendocino entirely in 2021. The U.S. Army Corps of Engineers and other groups are exploring ways to expand the approach to other reservoirs dominated by atmospheric rivers, which could expand supply.

“We’ve built reservoirs in all the good places,” Mount said. “The economic cost of reservoirs is extremely high.”

“If you can harvest that stormwater, pump it underground into basins or store it through reservoirs or natural engineering means like wetlands, the better you do that, the more equipped you’ll be in dry periods,” said David Feldman, a professor of urban planning and public policy at the University of California Irvine.

Some areas, such as the Chino Basin and Kern County, have developed programs to pump and recharge groundwater for future use.

“No matter what we do on the infrastructure side, we have to reduce demands for water,” Lund said.