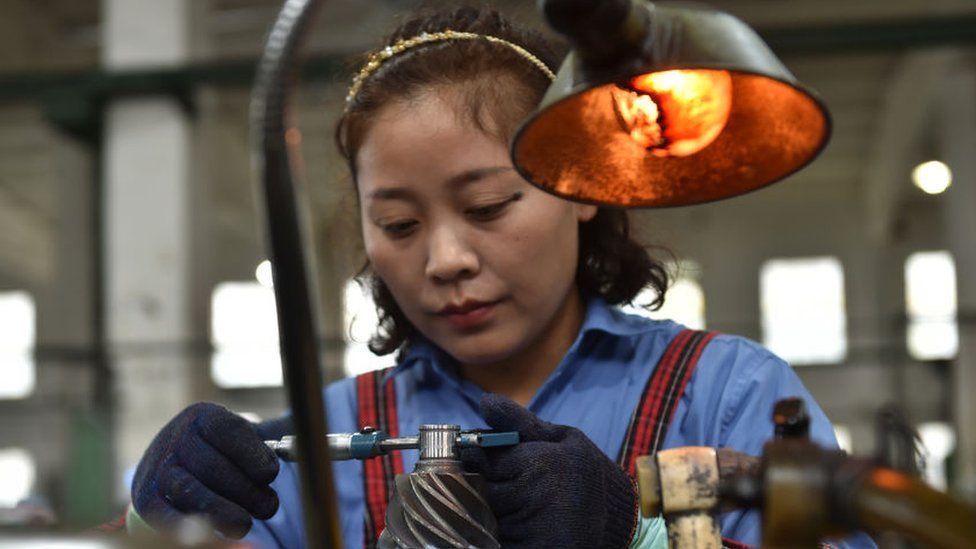 China's "factory gate" prices - a measure of what manufacturers charge wholesalers for products - grew at the fastest rate on record last month.

China is the world's biggest exporter and so price rises could affect other countries.

Firms globally are grappling with supply issues as economies emerge from the pandemic.

Major power shortages in China - caused by a jump in demand from industry, high energy prices and the country's shift to cleaner energy sources - have halted production at factories including suppliers of global brands like Apple.

Official figures showed that the producer price index (PPI) rose by 10.7% from a year earlier in September, the fastest pace of growth since records began in 1995.

But there is currently little evidence that these higher costs are being passed on to Chinese consumers.

China's consumer price index, which was also published on Thursday, rose by 0.7% year-on-year in September, edging up from the previous month but below most economists' forecasts.

However, that may change in the coming months as manufacturers' profits are squeezed and businesses are hit with higher electricity prices.

Demand amongst consumers may have weakened too for items such as household goods, clothing and food due to fluctuating costs.

The cost of goods in China are watched for signs that prices may rise in other parts of the world, which could push up inflation in countries that import its products.

Countries including the UK and US have seen inflation move higher in recent months as their economies open up after the pandemic.

That has led to growing expectations that central banks will be forced to increase the cost of borrowing and reverse emergency measures aimed at reducing the impact of lockdowns.

Some countries, including New Zealand, South Korea and Norway, have increased their interest rates in recent weeks in a bid to cool their economies and ease inflationary pressures.

The power cuts have disrupted many industries in the country, particularly those that use a large amount of energy, including cement production, steel and aluminium smelting.

The price of coal used in many of China's power plants has hit a series of record highs in recent days as utility companies struggle to produce enough electricity to meet demand.

Beijing has taken steps to ease the power crunch, including calling on coal miners to boost output and managing the amount of electricity used by large factories.