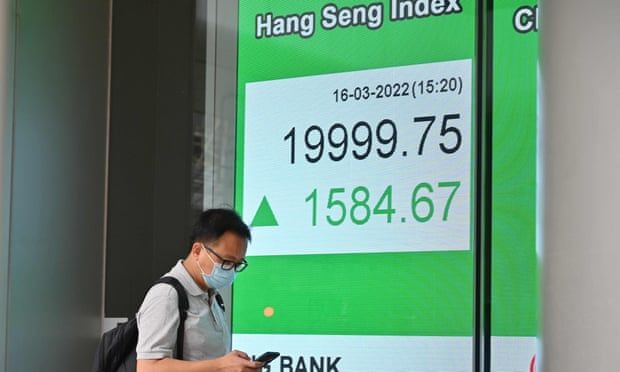 Plans to shore up real estate and tech sectors welcomed by investors, but downgrade of third-biggest developer Sunac shows problems persist
Chinese property shares have soared for a second day thanks to a decision by Beijing’s leadership to throw the country’s struggling real estate sector a lifeline amid growing pressures at home and abroad.

Despite a downgrade for China’s third-biggest property developer Sunac on Thursday, stocks in the sector lifted again in Hong Kong and the mainland thanks to an announcement by vice premier Liu He, China’s economic tsar, on Wednesday that the government needed to reduce risks in the industry.

In a sign of the heightened concern inside China’s Communist party leadership about the property sector and the economy in general – best illustrated by the near-collapse of the giant developer Evergrande – Liu urged the roll-out of market-friendly policies to support the economy.

That pushed up the Hang Seng mainland properties index 14.8% by midday in Hong Kong on Thursday, versus a 5.8% gain in the main Hang Seng index. The sub-index had already jumped 14.7% on Wednesday.

Technology shares have also bounced back after being under pressure for months. The Hang Seng tech tracker rose more than 7% after a stunning 22% gain on Wednesday, though has still halved in value from its peaks last year.

However, some investors are concerned that the property rally is not sustainable because it comes against a backdrop of continued problems for China’s biggest developers.

Sunac China, the nation’s third-biggest property developer by sales, was downgraded to B- credit rating by the agency S&P on Thursday – making it harder to borrow money – because of concerns that it might not be able to meet its huge debt repayments of nearly $4bn due this year.

Analysts at S&P have revised Sunac China’s liquidity position downwards from “less than adequate” to “weak”, and warned that the ratings will be reviewed as soon as “we have greater visibility on Sunac’s refinancing plans”.

Despite this gloomy assessment, Sunac’s shares were up 60% in Hong Kong on Thursday afternoon. Other major developer Country Garden and Evergrande were both more than 20% to the good.

The real estate sector, a key driver of growth, has struggled for months as Beijing’s campaign to reduce high debt levels triggered a liquidity crisis among some major developers, resulting in bond defaults and shelved projects.

After Liu’s comment, the banking and insurance regulator also said on Wednesday it would seek to stabilise land and home prices, transform the real estate sector and encourage mergers and acquisition loans for developers to purchase distressed assets.
The finance ministry later said China was putting a planned property tax trial this year on ice, state-run Xinhua news agency reported.

Bill Bishop, the China observer and author of the Sinocism newsletter, said on Thursday that the move by Liu to try to shore up the markets showed how concerned Beijing had become.

“The readout shows how worried policymakers have become about the markets, real estate and the economy but I would be cautious in assuming that the messaging from Liu He and other financial regulators means the tough days are over,” he wrote.

“They are certainly trying to send a signal that they don’t want markets to go down more, but is it not clear this a real shift or more of a calibration to stabilize things.”