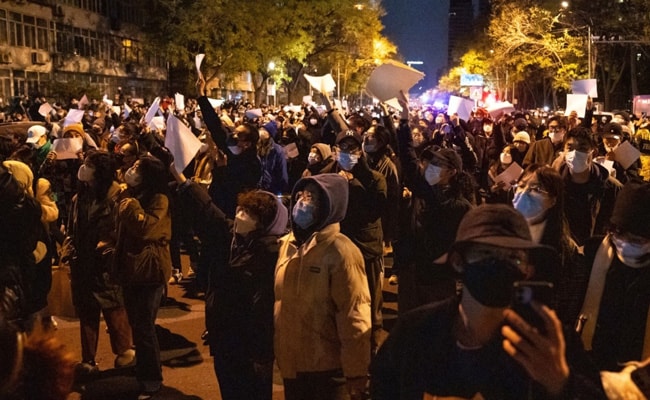 "We have lost far too much in these few years with the pandemic," one person wrote on the Twitter-like Weibo.
China's public has mixed emotions about Covid Zero coming to a sudden end, with some people expressing relief and planning their first trips abroad in three years while others worry about the spread of infections.

"We have lost far too much in these few years with the pandemic," one person wrote on the Twitter-like Weibo, where the government's plan to stop subjecting inbound travelers to quarantine from Jan. 8 was a top trending topic on Tuesday.

"Wish everyone a speedy recovery, and hope that we can all breathe freely and go to anywhere we want freely," the person added.

That desire for a quick return to normal life contrasted with concerns about overwhelmed hospitals, which have already come under strain in Beijing and Shanghai. "Domestic infections are still rising," one Weibo user wrote. "Isn't it obviously trying to get everyone infected," the person asked, referring indirectly to the government.

Another internet user wrote about a neighbor who died and a rumor that coffins were in short supply. "This is the result of opening up," the person wrote. "Why must we open up? Why can't we consider the vulnerable groups first?"

The divided views are understandable given the propaganda the Chinese government has used since 2020 to defend its harsh zero-tolerance approach to containing Covid-19, including snap lockdowns, frequent mass testing and largely closed borders. Chinese President Xi Jinping repeatedly defended the strategy despite the mounting economic costs, including as late as mid-October.

The restrictions became too much for many urbanites to bear in late November, when protests erupted in dozens of cities - the most widespread unrest the Asian nation has seen in decades. On Dec. 7, China took a decisive step toward living with the virus, including no longer forcing infected people into centralized quarantine camps.

The changes the National Health Commission announced Monday go further, opening the door to visa applications for foreigners and the resumption of outbound tourism, which dwindled to almost nothing during the pandemic.

There's signs the quick U-turn has baffled the public. "One month ago we were still saying we'd stick to Covid Zero and put people first, yet one month later we are completely 'lying flat' and letting it go," wrote one Weibo user, using a Chinese term for slacking.

"Right, that's called optimization," the person added, playing on how the government has said it is only tweaking its policy.
#COVID-19  #Covid