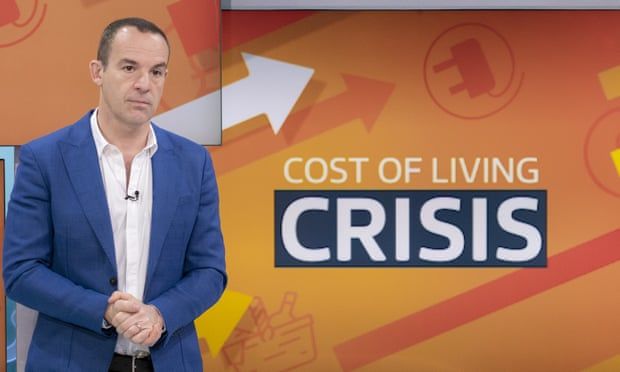 Money saving expert says UK government must do more to ensure people can heat homes and have enough food
Britain’s self-titled money saving expert Martin Lewis has warned that civil unrest over rising energy bills “isn’t far away”, as he repeated his call for more government intervention to protect people.

Lewis said he was the most scared he has been for people’s finances since he founded his popular website in 2003. It has traditionally offered advice on which bank accounts or phone providers may be cost-effective, and has been a regular port of call for people looking to switch energy provider and save money.

However, after the recent increase in the price cap for household energy bills to £1,971, it took the step of publishing a Heat the Human guide for people on how to keep themselves and their homes warm as they face a choice between heating and putting food on the table.

It includes steps like putting hot-water bottles in sleeping bags. “This is one of the richest countries in the world. It’s pretty desperate, isn’t it?” he said.

In an interview with the Sunday Telegraph, he said: “We need to keep people fed. We need to keep them warm. If we get this wrong right now, then we get to the point where we start to risk civil unrest. When breadwinners cannot provide, anger brews and civil unrest brews – and I do not think we are very far off.

“I get all these messages from people tearing their hair out. They don’t know how to make things add up.”

It echoes his comments to the Guardian in an interview in March, when he said that inflation and rising household costs could plunge more people into absolute poverty.

Currently, people will be able to get a £200 discount on their energy bills in October, which will be repayable. Council tax payers living in homes in bands A to D will be eligible to receive a £150 rebate on their council tax bills in April.

A further rise for the energy cap is expected in October. It is thought that inflation could reach 8.4% this year, according to an economic outlook report by PricewaterhouseCoopers. Lewis said that he thinks real inflation could even go as high as 12%.

If the PwC prediction is borne out, it would mean an overall drop of 2% in household incomes. This would be the biggest decline in wages since the 1970s, and the largest fall in living standards since records began.

Lewis added: “For people towards the bottom end, there’s nothing to cut back on. It is not an exaggeration to say that there are people we have to prevent freezing or starving.”

The PwC report, published in early April, said that British households were set to be £900 worse off this year in a “historic fall” in living standards. The lowest earners face a £1,300 drop in finances, which could grow even worse if the Russian invasion of Ukraine drags on.