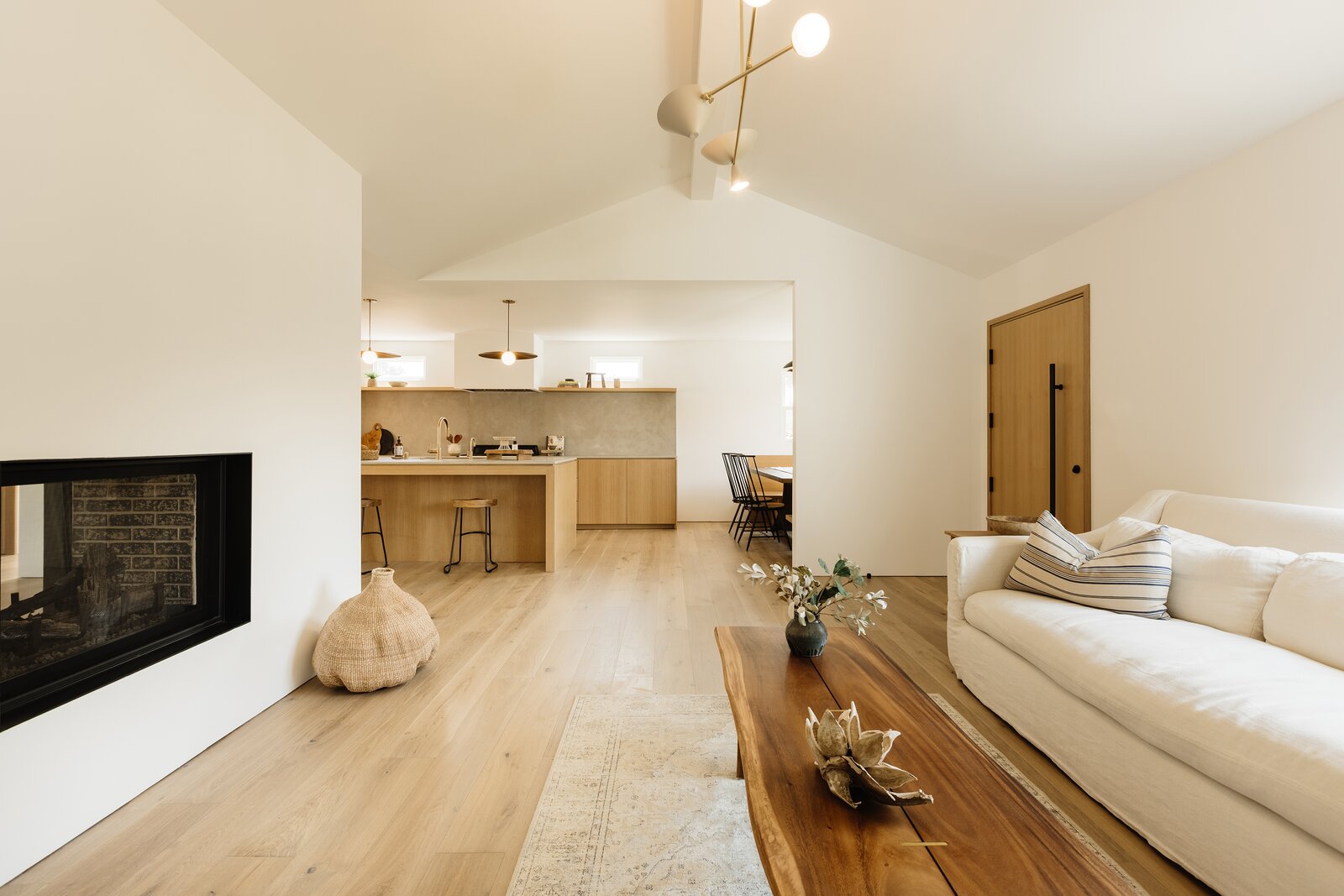 A Couple Brings Scandinavian Simplicity to a Complicated Renovation in L.A.

For a couple who prefers simplicity, this renovation wasn’t quite that. Cynthia and Dino Corella, the married designers behind the firm Casa Luna Allegra, were looking to raise their two daughters on the quiet, tree-lined streets of suburban Los Angeles when they came across this property in the city’s Baldwin Vista area. "It’s a centrally located neighborhood that’s very diverse and established, and for our kids, it also has great parks," Dino says. 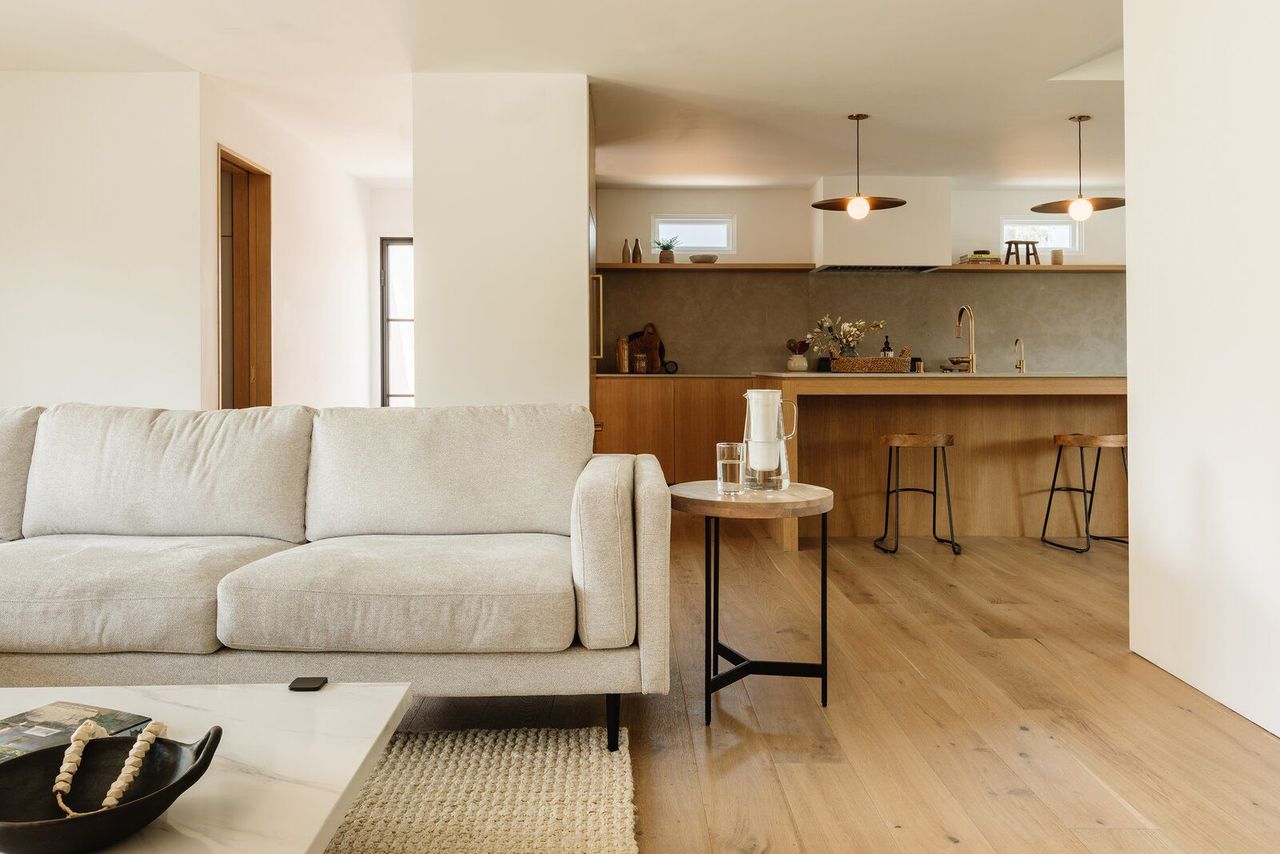 The couple worked within the existing footprint to modernize this midcentury home, which is modest but shines in the execution of the details. Scandinavian-style touches include an abundance of natural wood, sparse furnishings, and accessories with Danish-inspired design, including the LifeStraw Home water-filtering pitcher (shown). 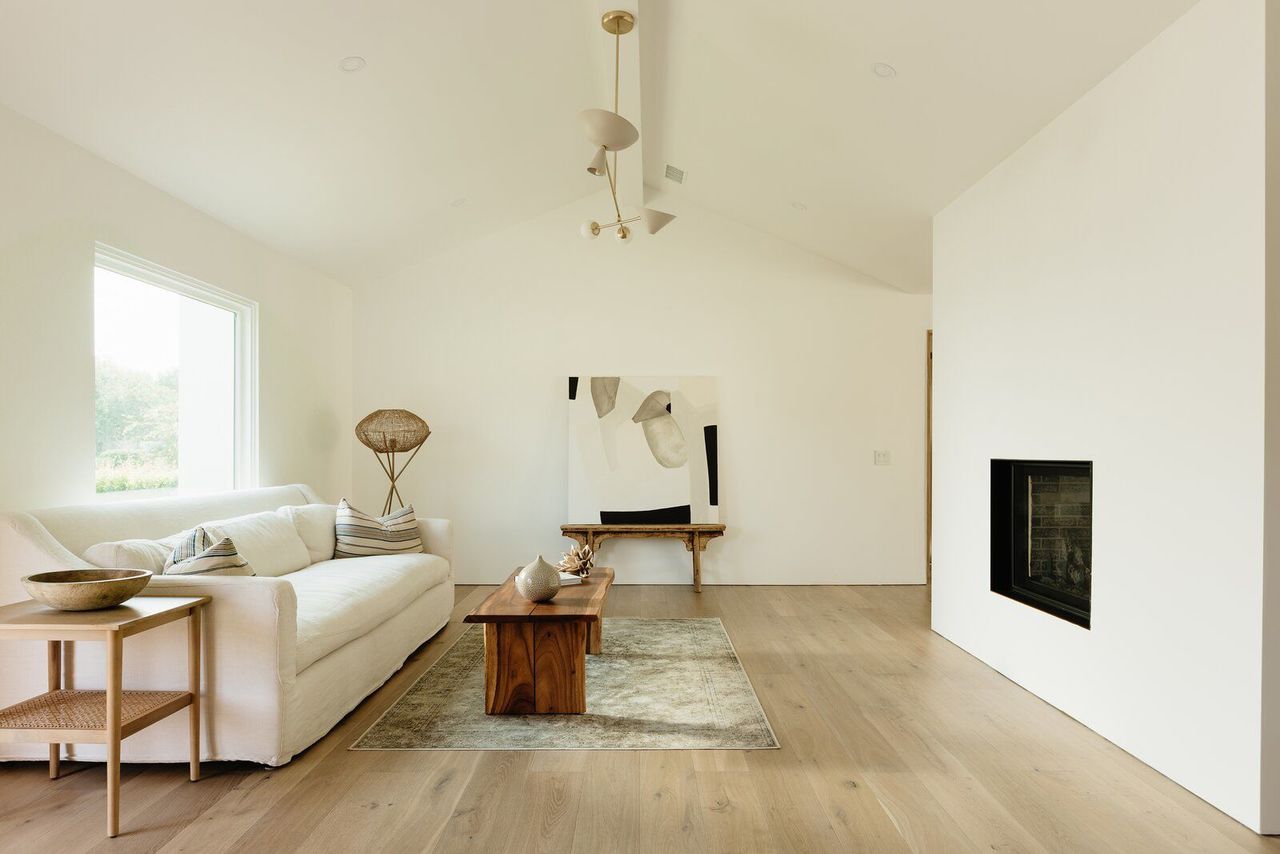 This project’s pared-back interiors came from the homeowners’ revelation that they had way too much stuff in their lives and wanted to live more intentionally.

The house itself, which was a 1948, dilapidated one-story structure set on a corner lot, seemed straightforward enough. It had peeled paint and an uneven roofline, but as Dino confidently jokes, "Once you’ve done a few renovations, they don’t differ too much." They bought the house in January of 2020, filled with the promise of a new year and a fresh project. "I started to work on my plans alongside the demolition," Dino remembers. "We were rolling along on schedule until the pandemic hit." 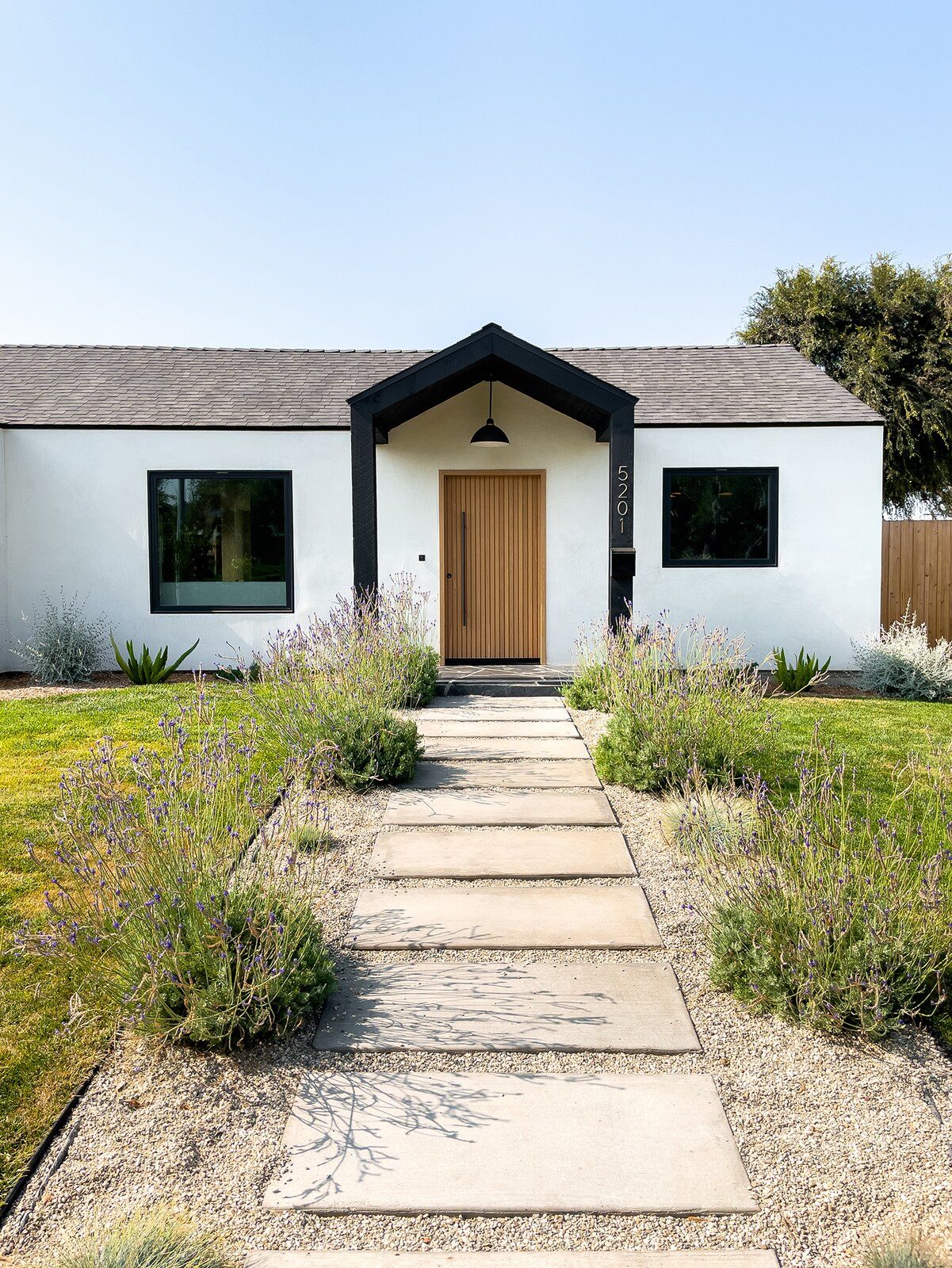 "We have a set vision for every renovation we do, and for this one it was a modern, clean-lined home with a traditional feel," Dino notes. He designed the front door in white oak to match the interiors, and added an outsized, 4-foot handle.

The project was suddenly delayed and the building department was indefinitely closed, but that wasn’t the only obstacle the couple faced. "When we spoke to the previous owner, we found out that he started to do some renovations, but quickly realized it was going to be a huge challenge and stopped," Cynthia says of the unanticipated structural issues. She notes, "The home's foundation, framing, and sewer had problems. There was a lot to do." 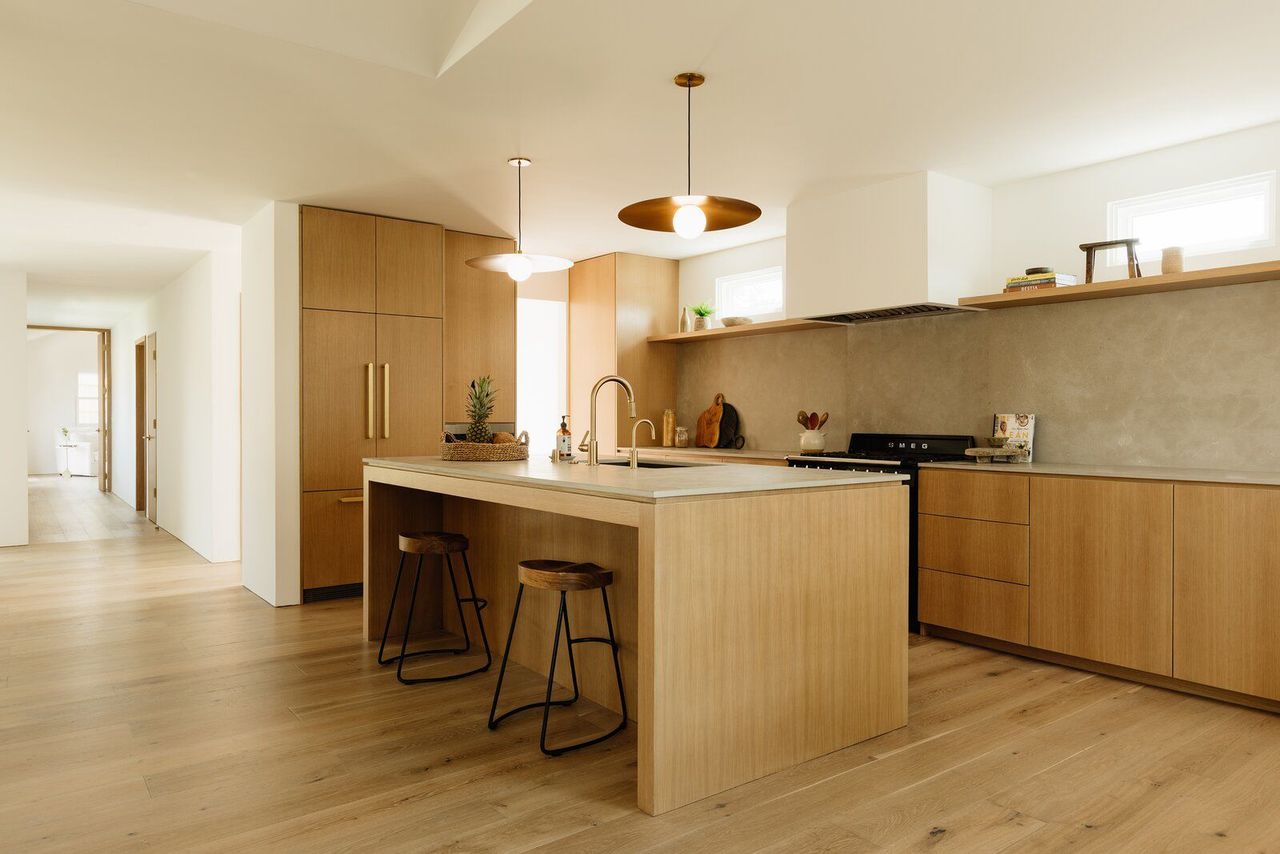 "We wanted to use natural materials in a neutral color palette," Dino says of the sleek kitchen. "Adding the Smeg range lends that European element we were going for." White oak cabinetry and a brushed, soft gray limestone create more layers of texture.

Dino decided that the best way to face these separate hurdles was to simply focus on the work. His thoughtful plan embraced the home’s existing midcentury lines and opted to push them more toward those of a modern farmhouse. A backdrop for a palette of natural materials, the main house would have four bedrooms and three bathrooms, while a guest house behind it would be equipped with an extra bedroom and bathroom. "I like to take a home that has been neglected and turn it into the envy of the neighborhood," Dino says. "We wanted everything to feel thoughtful, down to the finishes and details." 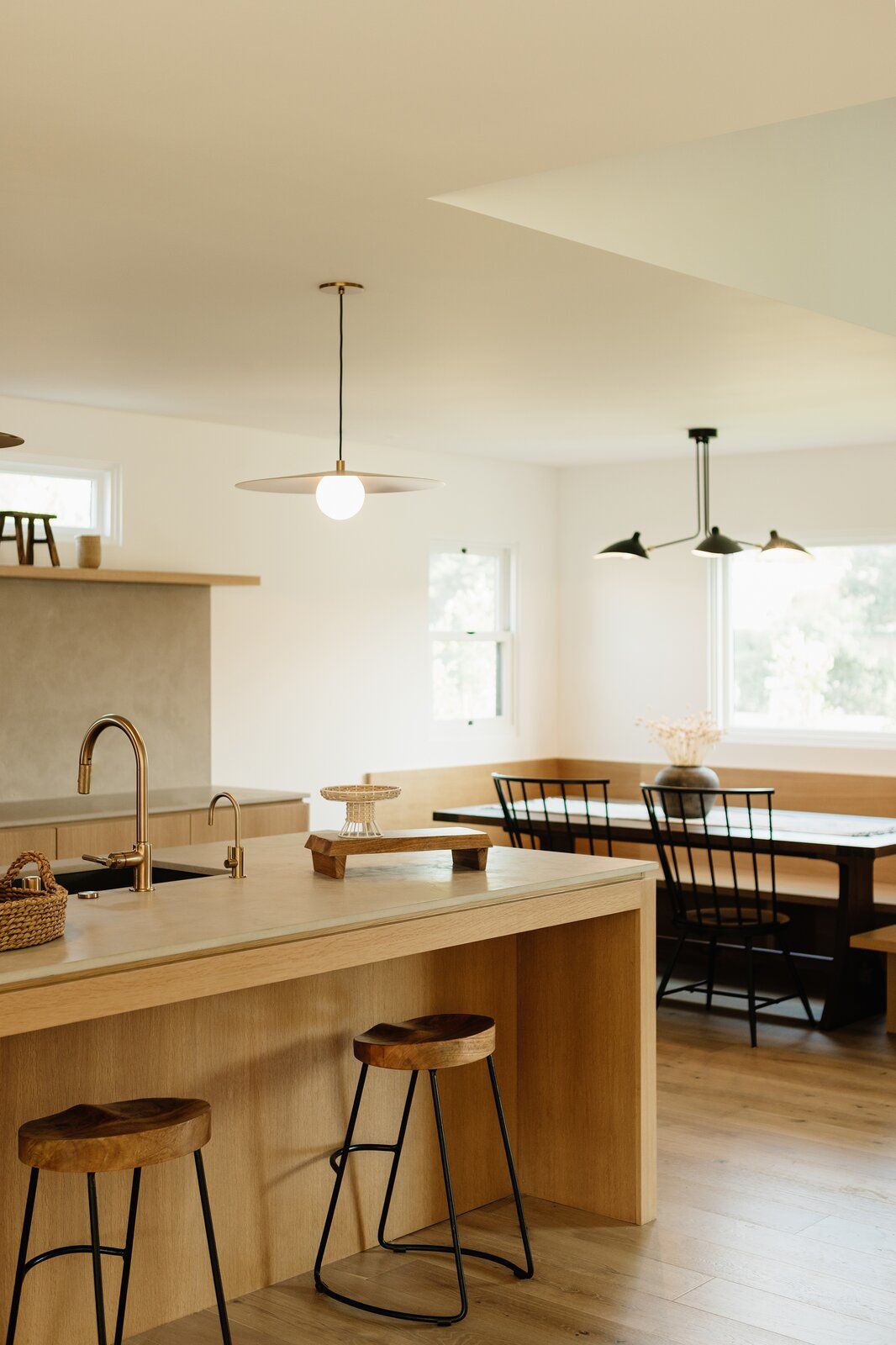 "Cynthia made sure the kitchen had enough storage space along with the proper appliances," Dino notes. "She is a great cook, so the kitchen design was very important to her." 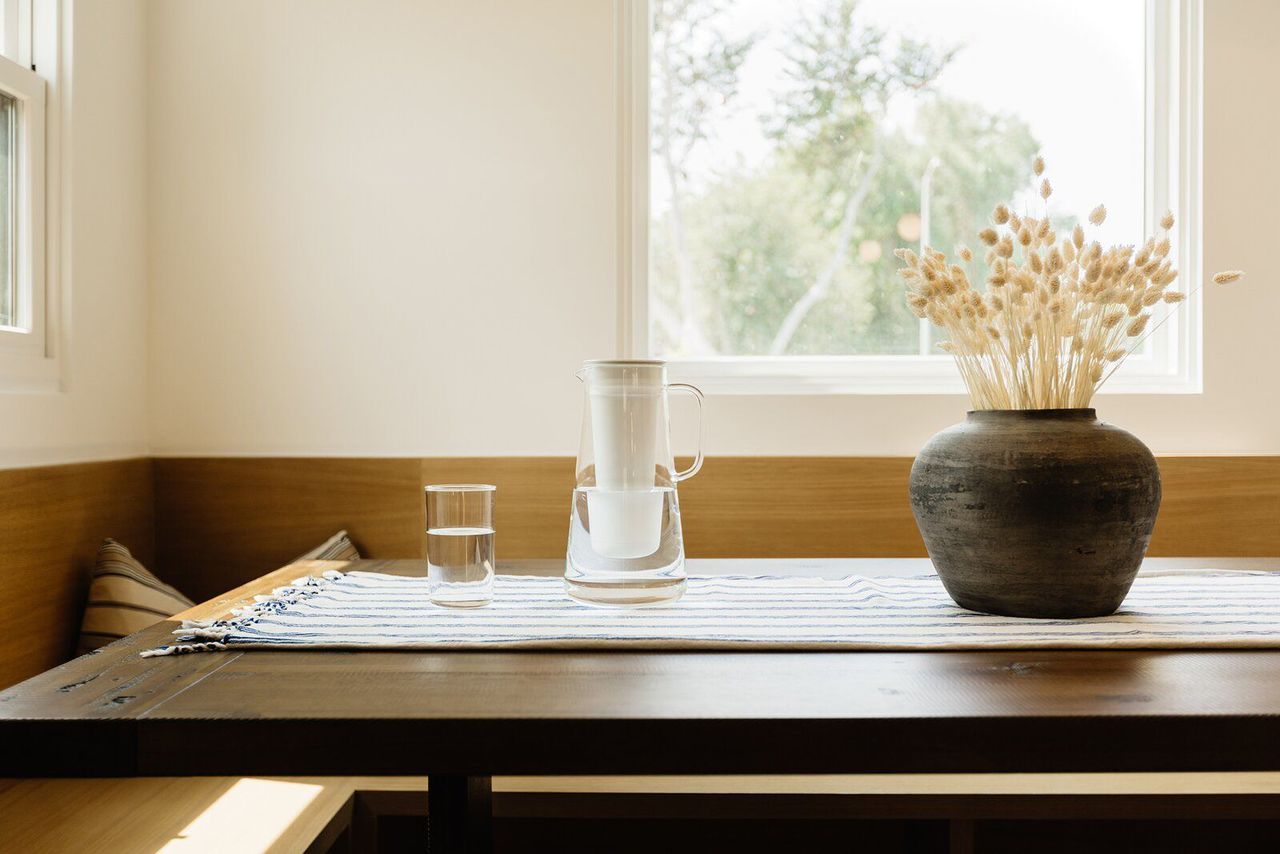 Months later, when the industry began moving again, the couple turned their attention to the home’s crumbling foundation, which had settled up to seven inches in some areas and needed to be entirely replaced. "If you start with a building that’s level and plumb, then you end up with a building that’s level and plumb," Dino says of his insistence on creating a solid foundation. The Corellas rebuilt the frame within the same footprint and redesigned the front porch without eaves, then paired it all with new UV-grade windows and a tankless water heater for increased energy-efficiency. 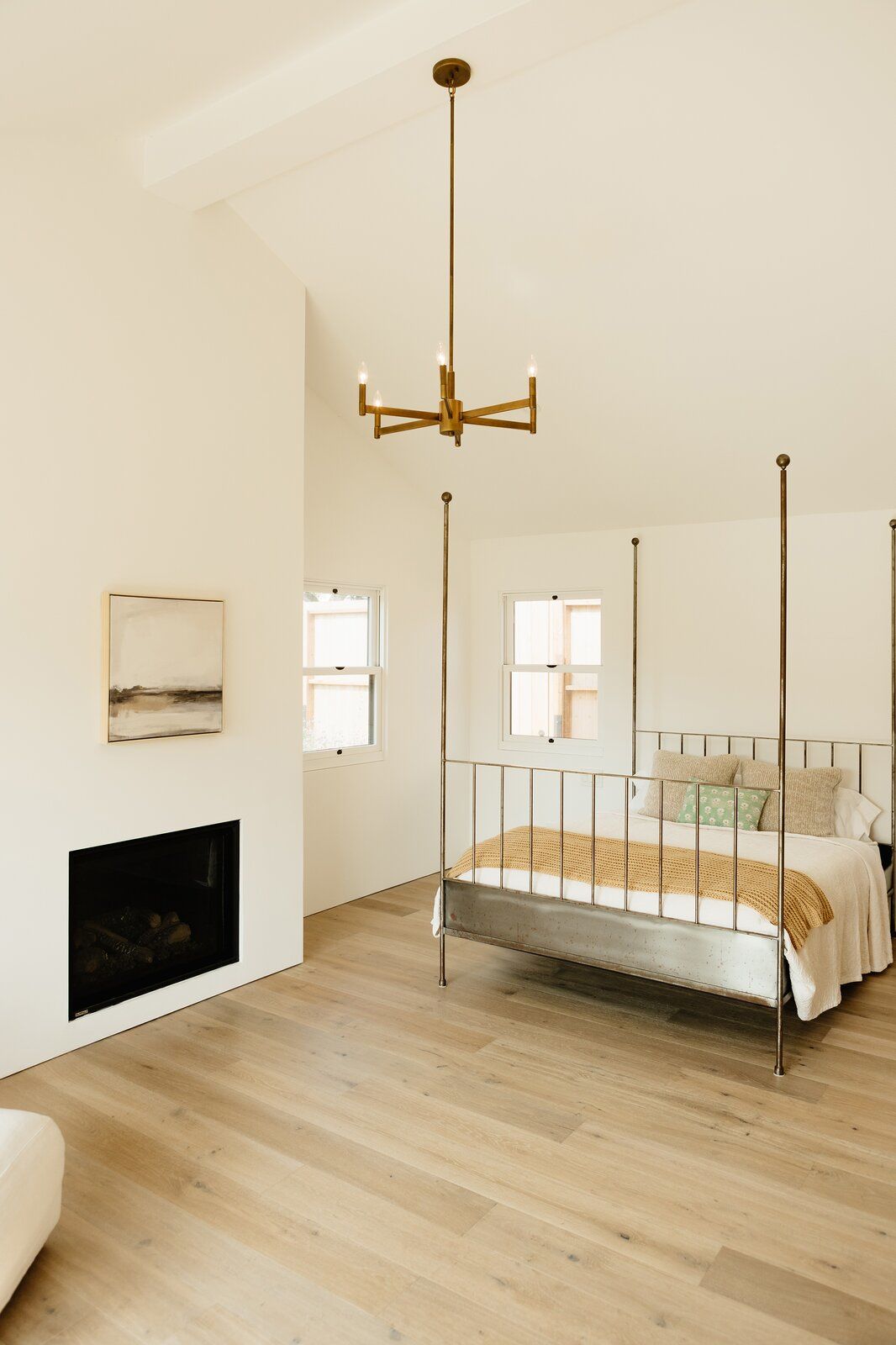 The bedrooms especially lean into Scandinavian design, with a minimalist approach to furnishings.

Dino wanted the front door to make a statement, so he also designed it himself. "The scale of it gives you a sense of what to expect before entering the home," he says. "I actually selected the handle before I finished the sketch. Since it’s so long, we had to place it vertically. The vertical-slate design of the white oak complements this, and adds dimension to the more Scandinavian-style exterior," Dino notes. 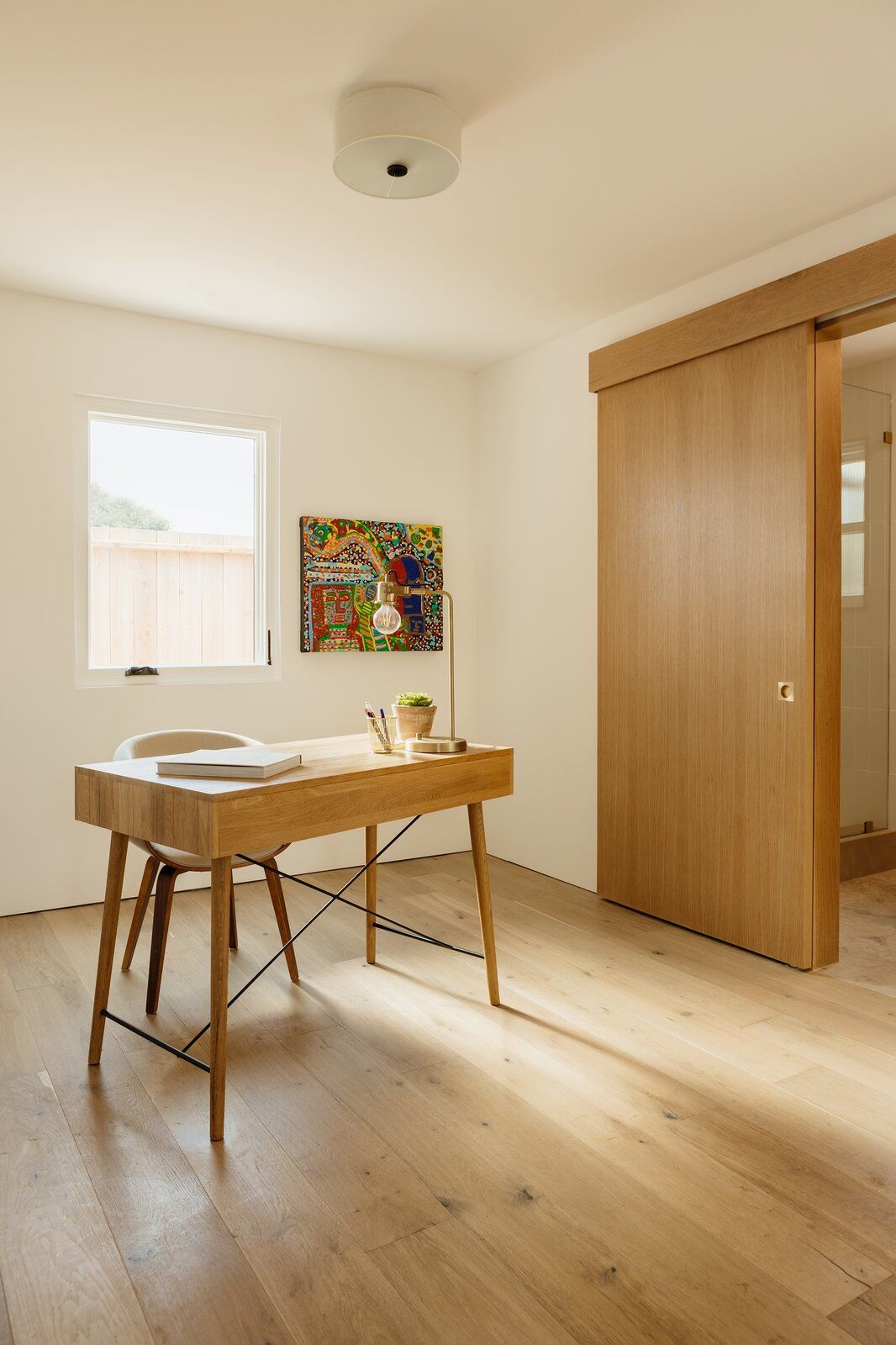 "I wanted to bring a European style to the spaces," Dino says of the lavish custom millwork installed throughout the home.

Inside, the designers specified golden white oak for continuity, vaulted the ceilings, and swathed all the walls in white paint. The effect is especially successful in the kitchen, which sticks to this palette almost exclusively. "We didn't want stainless steel everywhere, nor did we want a lot of hardware," Cynthia says. "Concealing as many appliances as possible with white oak was a key concern. We wanted it to be warm and still functional." 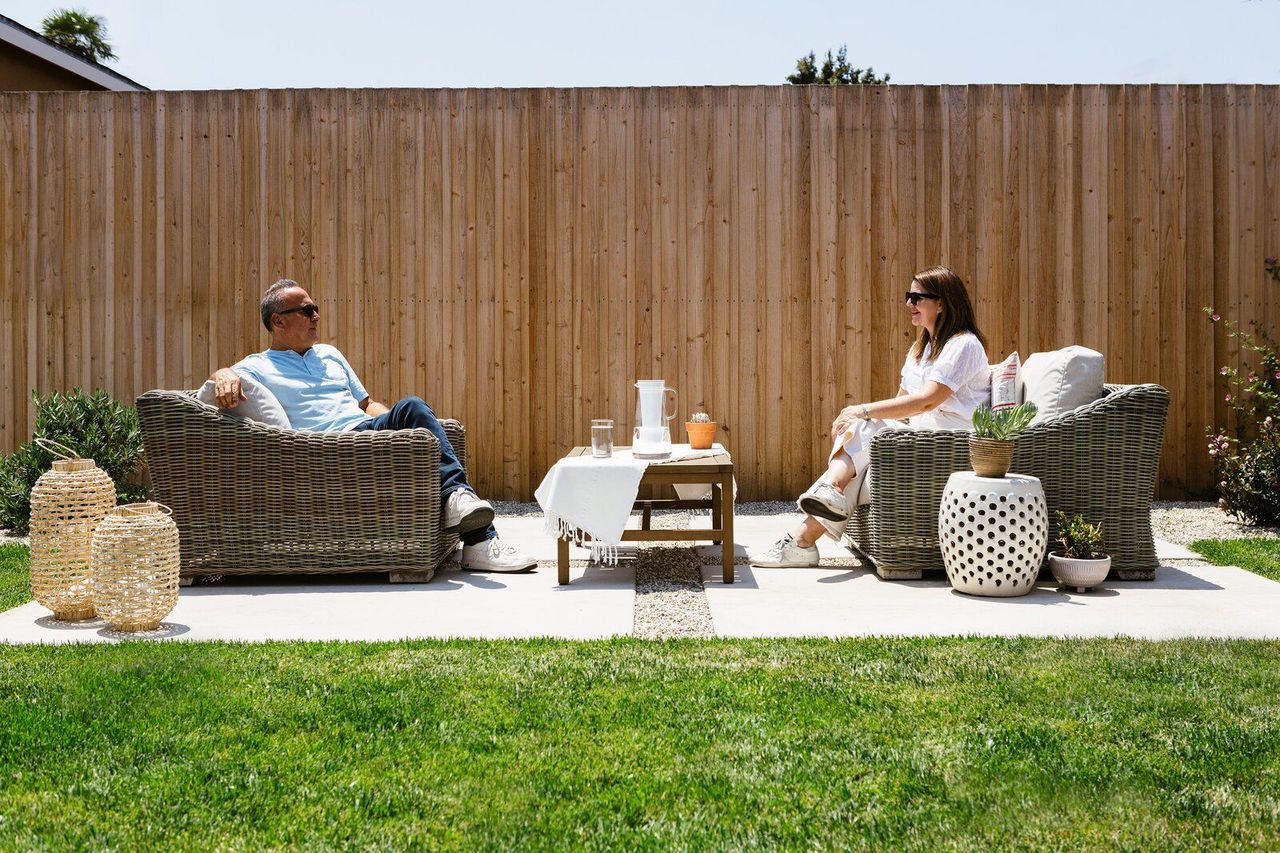 Outside, Dino and Cynthia (pictured) revamped the grounds with new landscaping and seating areas. Like the LifeStraw water-filtering pitcher (shown), the couple’s remodel reflects a pairing of Scandinavian simplicity and award-winning functionality.

Different types of stone-like limestone for the kitchen countertops and marble for the bathroom flooring-incorporate a hint of texture into the extremely minimalist aesthetic the couple was after. And now that the renovation has wrapped, the couple can view the project as another challenge conquered. "Our lifestyle has always been a simple one," Dino says. "When it came to designing our home, it was all about creating a functional space that we knew we’d enjoy."