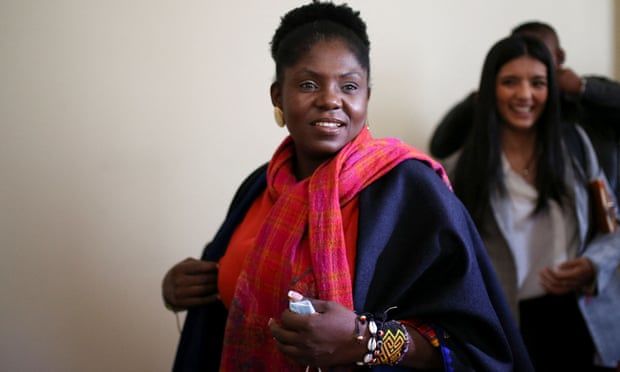 Francia Márquez, 40, an environmental campaigner who has survived at least one assassination attempt, is leftist Gustavo Petro’s running mate

She is an Afro-Colombian environmental crusader who has faced down untold death threats and survived at least one assassination attempt to become one of the leading lights of Latin America’s new left.

Now, Francia Márquez, 39, could be on the verge of becoming Colombia’s next vice-president after the leftist frontrunner, Gustavo Petro, picked her as his running mate – a move that has thrilled progressives and civil rights activists across the region.

“How could I not cry, if I represent the black women of this country?” said Márquez, after receiving the nomination on Wednesday morning.

“Every Colombian, in their diversity, from the regions, from each territory, made it possible for us to be here,” said Márquez, who, if elected in the 29 May vote, would join Costa Rica’s Epsy Campbell Barr as one of only two black female vice-presidents in Latin America.

“I thank the people that have remained in resistance for life, peace and social justice,” she added, vowing to fight “for the ‘nobodys’ of this country”.

A law student and mother of two, Márquez comes from the war-torn western department of Cauca, where her outspoken opposition to illegal gold-mining mafias led to death threats that forced her to flee her home.

She later led a 10-day, 350-mile march of 80 women from the Amazon to Bogotá that prompted the government to send troops to remove the miners and put an end to the cyanide and mercury contamination they caused.

In 2018, she was awarded the prestigious Goldman environmental prize for her campaigning.

Márquez’s selection as the running mate of a serious presidential hopeful breaks the mould in Colombia, where since independence, politics has been dominated by wealthy white men.

Afro-Colombians make up nearly 10% of Colombia’s population of 50 million, descending from enslaved people brought from Africa to work on sugar cane plantations, goldmines and the large estates of landowning Spanish colonists. They remain under-represented in business and politics.

“As someone from a group that has been historically discriminated against by the systems of power in Colombia, I’m incredibly happy,” said Yacila Bondo, a young Afro-Colombian activist. “Just for her to be named as candidate for vice-president is historic.”

“Just a few years ago it was unimaginable, and when she announced her campaign, people laughed,” Bondo went on to say. “This is going to open so many doors in our social imagination, and we’ll see more black women and girls going into politics.”

Márquez was chosen as Petro’s running mate after winning over 750,000 votes in a primary earlier this month. Both belong to the leftist Historic Pact coalition, which is largely made up of anti-establishment politicians and many political newcomers.

“As well as being a black woman, a mother and head of her household, and a victim of the conflict, she also bridges the rural-urban divide in Colombia,” said Sergio Guzmán, director of Colombia Risk Analysis, a local consultancy. “The only doubt about her before was whether she could get votes, which after the primary we know she can.” 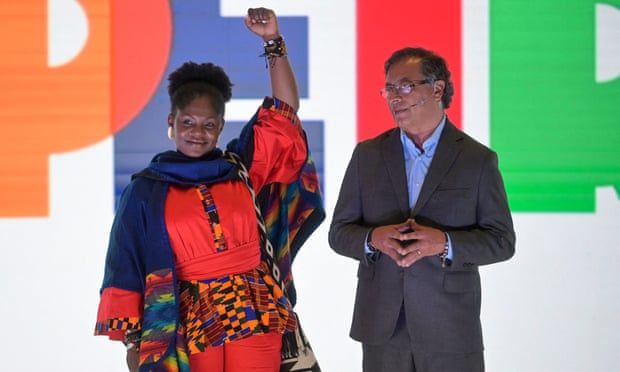 Francia Márquez with Gustavo Petro, presidential candidate with the Historical Pact coalition, right, during an event in Bogotá on Wednesday.

“We are not one and another, we are one and one, a team working for Colombia,” said Petro, who is battling to become the country’s first ever leftist president.

Petro, who as a youth was a member of the now-defunct M-19 guerrilla group, has served as mayor of Bogotá, the capital city, and came second in the last presidential election in 2018.

His main rival this year will be Federico Gutiérrez, the former mayor of Medellín, Colombia’s second city, who is widely seen as representing the centre-right status quo. Colombia has never had a president from the left.

Also on the ballot will be Colombia’s fragile peace process with the leftist rebels of the Revolutionary Armed Forces of Colombia (Farc), who demobilised after a peace deal was signed in 2016, ending decades of civil war that killed over 260,000 and displaced 7 million people. State forces and their paramilitary allies contributed to the violence.

Petro is viewed as a fervent supporter of the deal, while Gutiérrez is thought to be a skeptic.