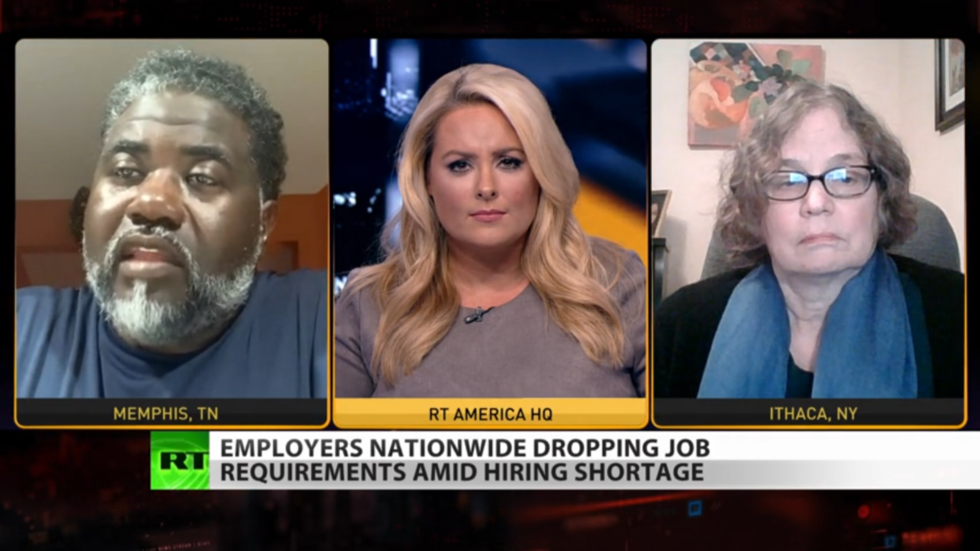 Tens of thousands of medical workers at Kaiser Permanente are striking for a one percent raise. Instead of meeting their demands, the company is hiring ununionized workers, or "scabs."
RT America's Faran Fronczak explains how the "two tier pay" cherished by so many US companies gaslights unionized workers into accepting pay cuts and hardship while the managerial class rakes in more money than ever before at levels scarcely imaginable to ordinary working people, whose wages have not kept pace with rising inflation and living expenses. Could there be a dimension of triumph in the "quit your job" craze?

Big US companies are going to disturbing lengths to replenish the country's workforce. On-the-spot job offers are becoming more common and employers are easing qualifying standards. Education requirements, background checks, and lengthy interview processes are all on the chopping block. This comes at a time of record household debt and lingering supply-chain issues. Kevin Bradshaw of BCTGM 252G Memphis and Kate Bronfenbrenner, director of Labor Education Research at Cornell University, share their expertise.

Washington has filed charges against hackers from Ukraine and Russia following a major ransomware spree that targeted as many as 1,500 businesses around the world. US law enforcement has confiscated millions of dollars in assets, including phone and computer equipment. One of the criminals remains on the run.

Plus, RT America's Mollye Barrows reports on a couple's horrifying discovery that after spending thousands at a fertility clinic, the wrong embryo was implanted, carried, birthed, and mothered for an entire year before the error came to light. Then reproductive attorney Melissa Brisman joins to discuss the legal and ethical repercussions of such a grave error. She says that more and more such errors are going to be uncovered with the advent of widespread DNA testing at home.