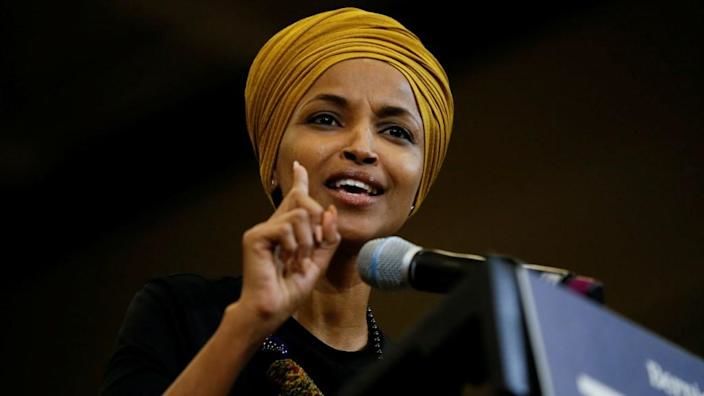 The FBI is looking into reports that Representative Ilhan Omar (D., Minn.) married her brother in order to ease his immigration to the U.S.
A group linked to the Republican Party has released a report, seemingly indicating that Rep Ilhan Omar married her own brother to get around the US immigration laws. The report does not identify either Omar or her former husband Ahmed Elmi, but simply as 'Sibling 1' and Sibling 2'. The report indicates there is 99.999998% that the two individuals are siblings, and it is believed that they are Omar and Elmi.

The rumor that Omar and Elmi were siblings gained traction in 2020 after a Somali man made the claim. In March 2020, the man claimed he "feared for his life" after Omar's friends made threats. Those claims surfaced after Omar divorced her first husband Ahmed Hirsi for the second time in 2019. That messy second divorce came after Hirsi reportedly found Omar cheating on him with her chief strategist.

Two agents interviewed a person with knowledge of the case in Minnesota in mid-October. The person presented a trove of documents relating to the marriage of Omar and Ahmed Nur Said Elmi in 2009.

A number of right-wing blogs have for years posited that Elmi, a British citizen, is Omar’s brother based on a years-old Instagram post that identified him as the “uncle” of Omar’s child. The agents are reportedly now looking into the possibility that Omar married Elmi in order to obtain a Green Card for the brother.

Omar did not comment on the latest report, but has repeatedly denied the allegations she married her brother. The claims were initially sourced to a post, since deleted, on the website Somalispot, a blog forum that caters to Minnesota’s Somali community.

Before the marriage to Elmi, Omar was engaged to Ahmed Hirsi in 2002, however the congresswoman has said she did not legally marry Hirsi. Omar and Hirsi split in 2008, but reunited in 2012, even though Omar was legally married to Elmi until 2017.

Omar separated from Elmi in a no-fault divorce, which she obtained by stating under oath that she had no way of contacting Elmi. That claim came under scrutiny last year when the Daily CallerÂ reported that Elmi may have designed source code for a website run by Omar’s sister from Nairobi, Kenya.

In addition to the speculation surrounding her family, Omar has also drawn fire for a series of anti-Semitic comments on Twitter. She and Michigan Representative Rashida Tlaib were refused entry to Israel in August due to their support for the Boycott, Divestment and Sanctions movement, which seeks economic and cultural boycotts of Israel.

Omar and Tlaib had planned their trip in conjunction with Miftah, a Palestinian non-profit that has published a blood libel accusing Jews of using the blood of Christians to make matzoh for Passover. Miftah also republished an American neo-Nazi article alleging that Jews control the news media and entertainment industries.