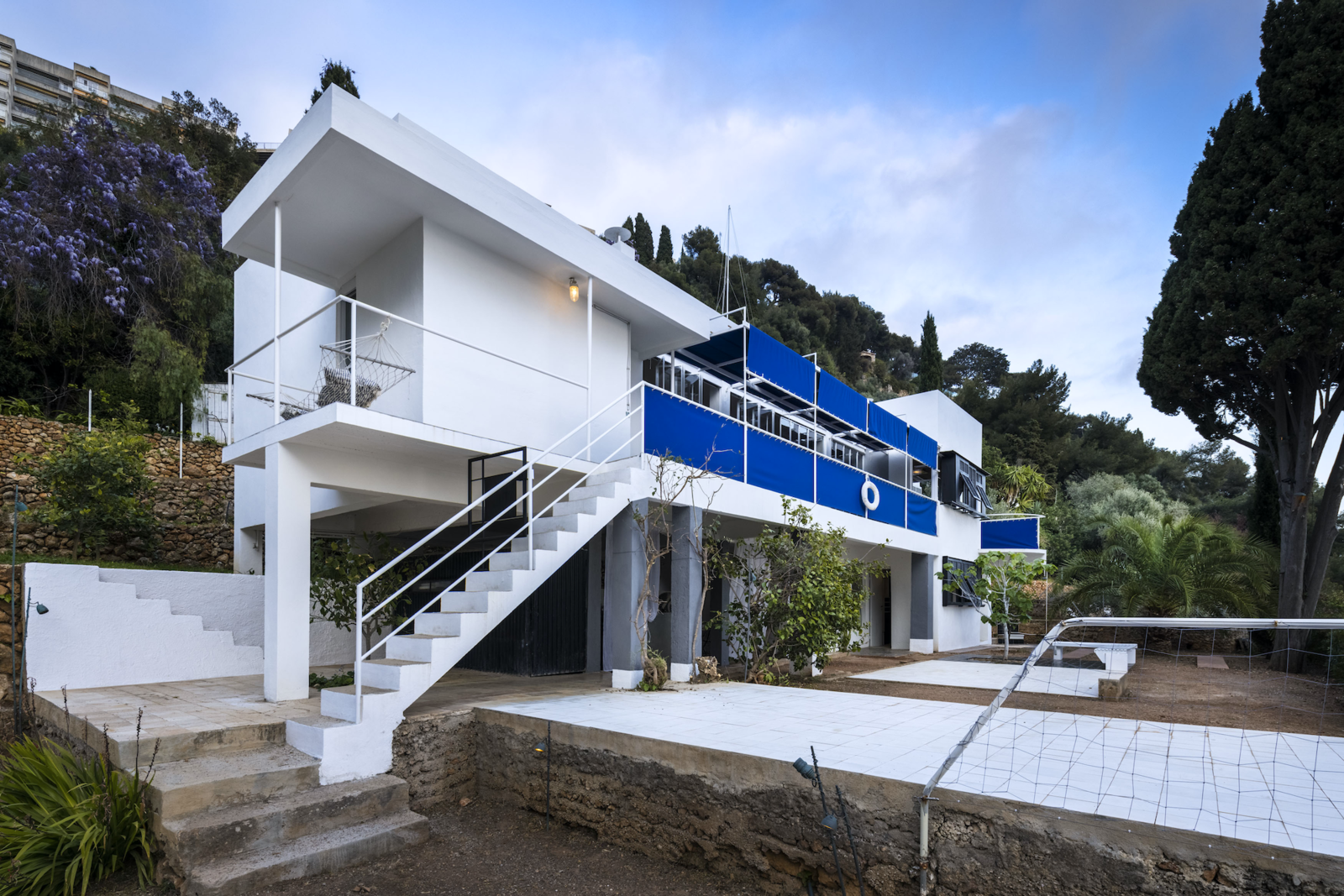 Built as a love token by the trailblazing furniture designer and self-taught architect, the stunning coastal house, now hailed as a masterwork, has been meticulously restored to its original splendor.

In the 1920s, when she was already a successful furniture designer and major figure within the Parisian Art Deco movement, the formidable Eileen Gray set out to complete her first-and most famous-architectural project. The Irish designer’s acquaintance, French-Swiss architect Le Corbusier, had recently published his seminal Vers une architecture (1923) essay collection, and her then-partner, Jean Badovici, was an architecture critic who favored modernism. In 1926, Gray bought a plot of land overlooking the Mediterranean Sea in Roquebrune-Cap-Martin, France, where she set out to build a romantic seaside villa for herself and Badovici. 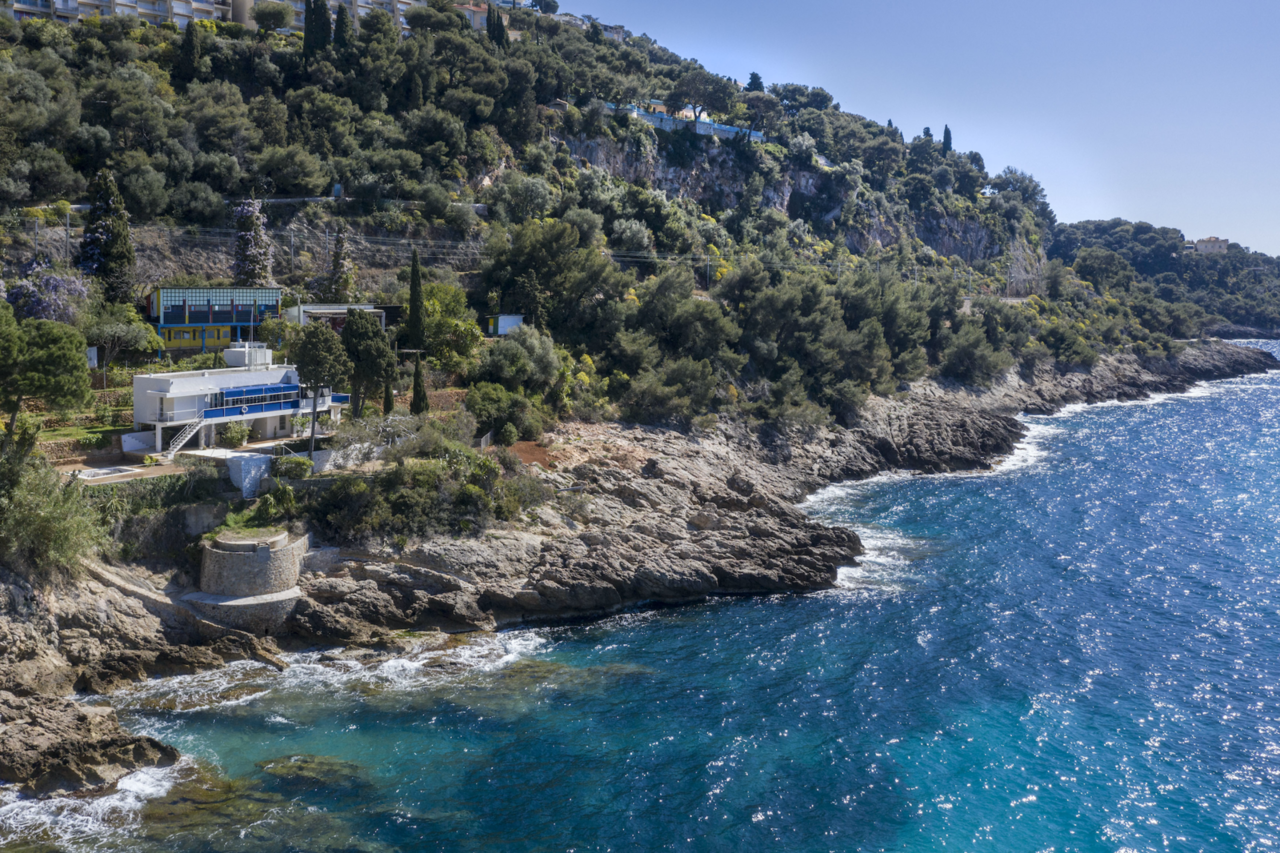 The two-story E-1027 villa resembles an Art Deco yacht moored upon a craggy ledge. Gray incorporated many nautical elements into the building’s design, including the band of horizontal windows, the mast-like flagpole, the balconies with white rails and blue-canvas awnings, and the softening curves that kept the white-plaster exterior from appearing too harsh and angular.

Gray, who was then in her forties, camped on the rocky land (in a tent of her own design, of course) in order to observe the topography of the site, as well as the path of the sun and winds. Her preliminary sketches for the villa included overlays of the sun’s movement during the day, as well as the predicted pathways through the house that its various inhabitants-staff, guests, and residents-would take. Gray used these overlays to orient the house on the site and to lay out the position of the various rooms. For the next three years, the Irish designer traveled back and forth between the Côte d’Azur construction site and Paris, creating new, multiuse furniture for the space-some of which would be sold in her Parisian design shop. 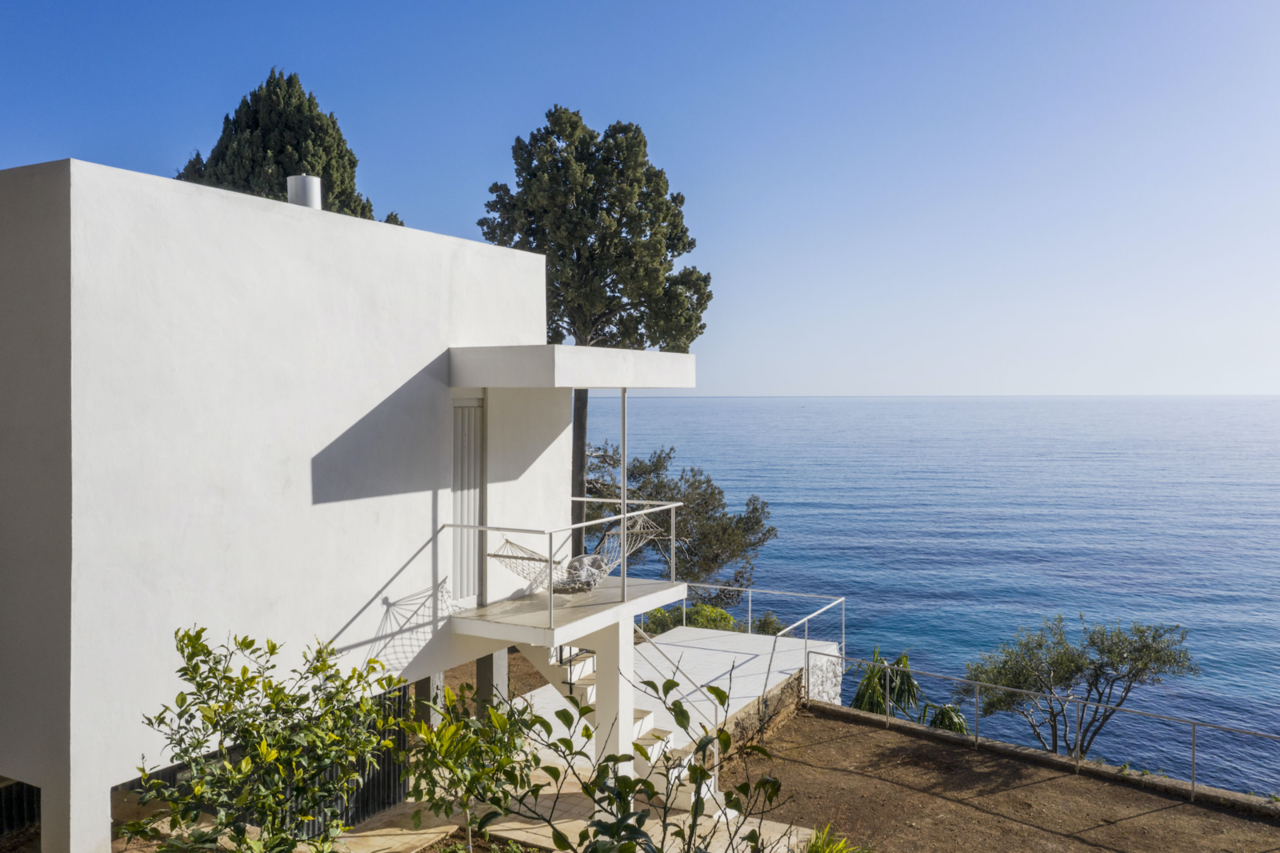 The unadorned, white-painted facade of the cube-like villa provides a clean foil for E-1027’s raison d'etre: a glorious view of the Mediterranean Sea.

Gray completed the two-story villa in 1929, with some collaboration from Badovici. E-1027’s name is a playful nod to the couple’s initials (‘E’ for ‘Eileen’; ‘10’ and ‘2’ for the alphabet order of ‘J’ and ‘B’ representing ‘Jean Badovici’; and ‘7’ for the ‘G’ in ‘Gray’). Among the early guests at the coastal getaway was Le Corbusier, who, it is said, became smitten by the design of E-1027. Gray’s attention to detail and personal design touches are evident everywhere a visitor looks in the villa, from the chic, built-in and freestanding furniture, to the deftly orchestrated path of sunlight through the rooms, and the balcony’s unblinking gaze over the sparkling Mediterranean waters. 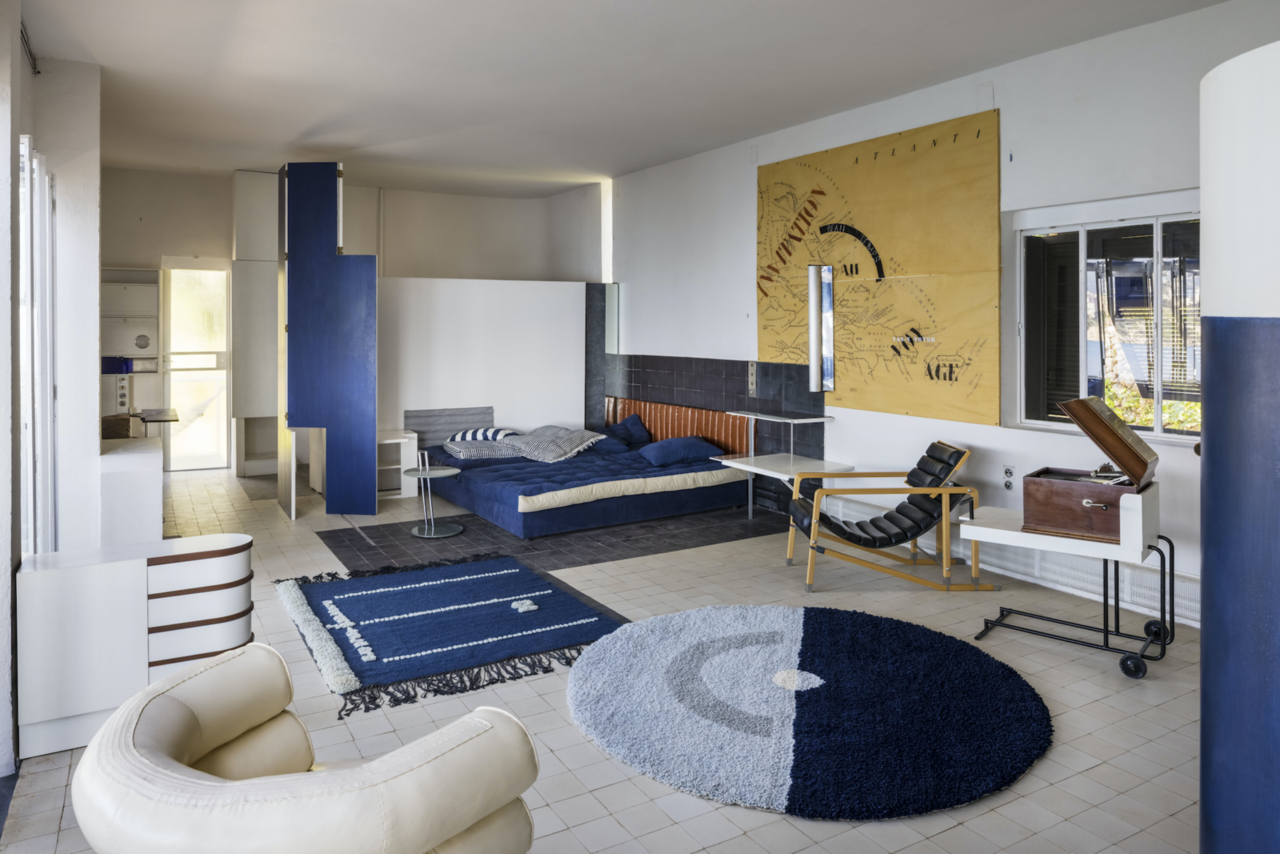 The living room was restored with sea-inspired furnishings including a large nautical map and a low-slung Transat chair that Gray designed based on the deck seating on transatlantic cruise ships. Deep-blue accents mark the rugs, daybed, and room dividers. 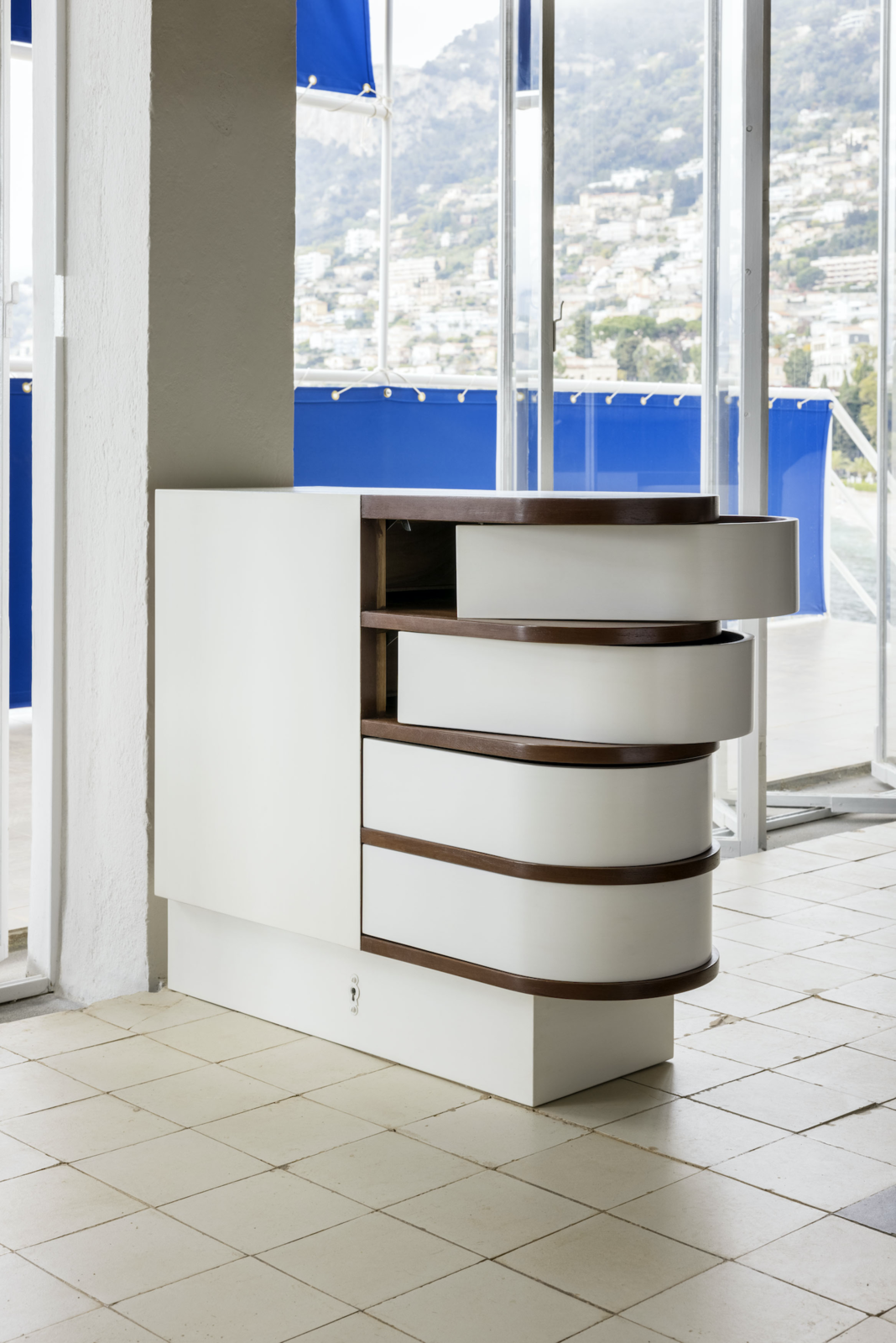 The drawers of this curved-edge cabinet swing open laterally rather than pulling straight out. Gray built four traditional drawers into the back of the cabinet to conceal valuables. 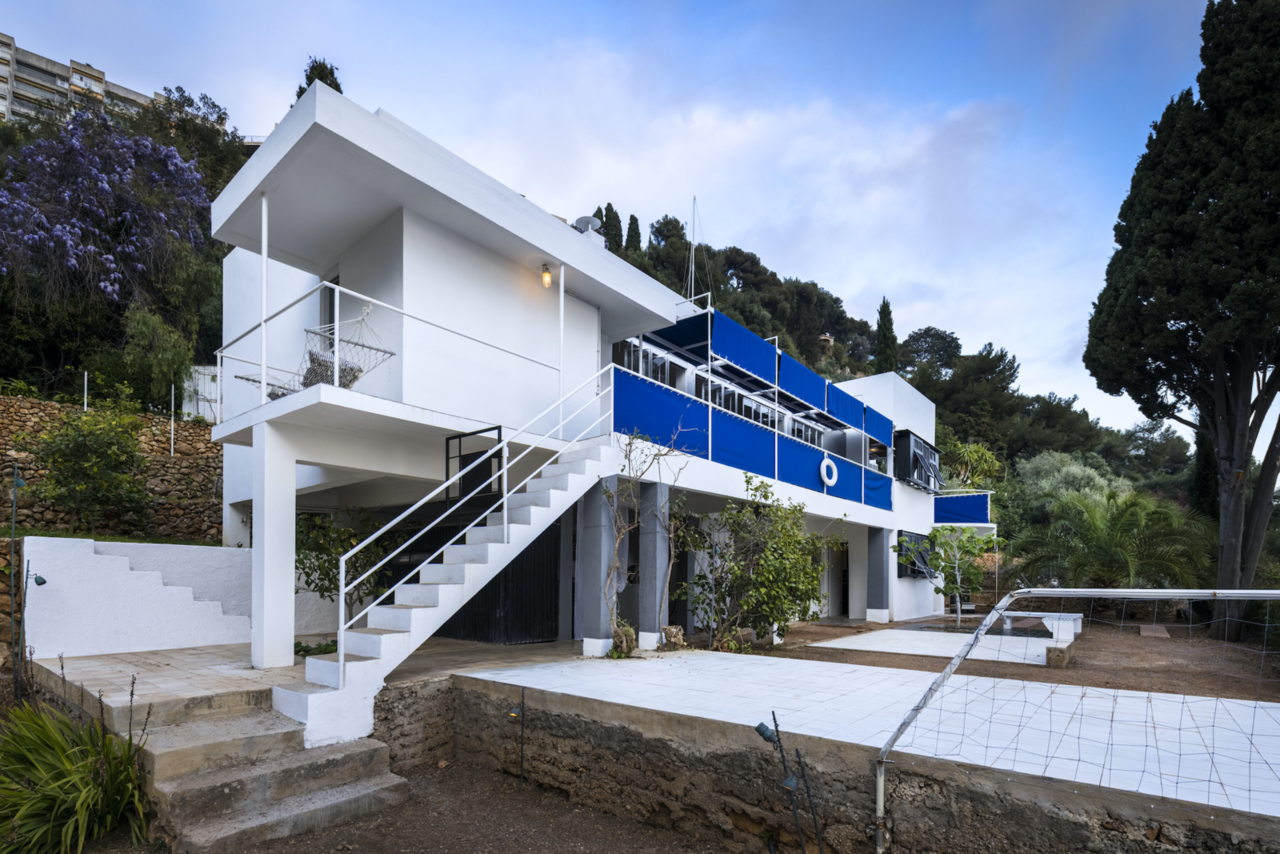 The two-level villa is supported by pilotis, or columns that elevate the building. On the interior, Gray carved out separate rooms using partial walls and moveable screens to create the option for privacy, instead of leaving the spaces open.

After Gray and Badovici split in 1932, Badovici, a French citizen, retained ownership of E-1027. Gray never returned to the house, but Le Corbusier did-including in 1938 and 1939, when he painted a series of large, colorful murals on the walls that Gray had deliberately left white, much to her dismay. The saga continued: During the German occupation of France, Nazi troops used E-1027 for target practice, defacing the exterior walls and murals. After the war, Le Corbusier built a small rustic beach house, dubbed Le Cabanon, on the adjoining lot. The hillside cluster-now known as Cap Moderne-includes the two architects’ villas, along with some holiday cabins and a small snack bar decorated by Le Corbusier’s murals. 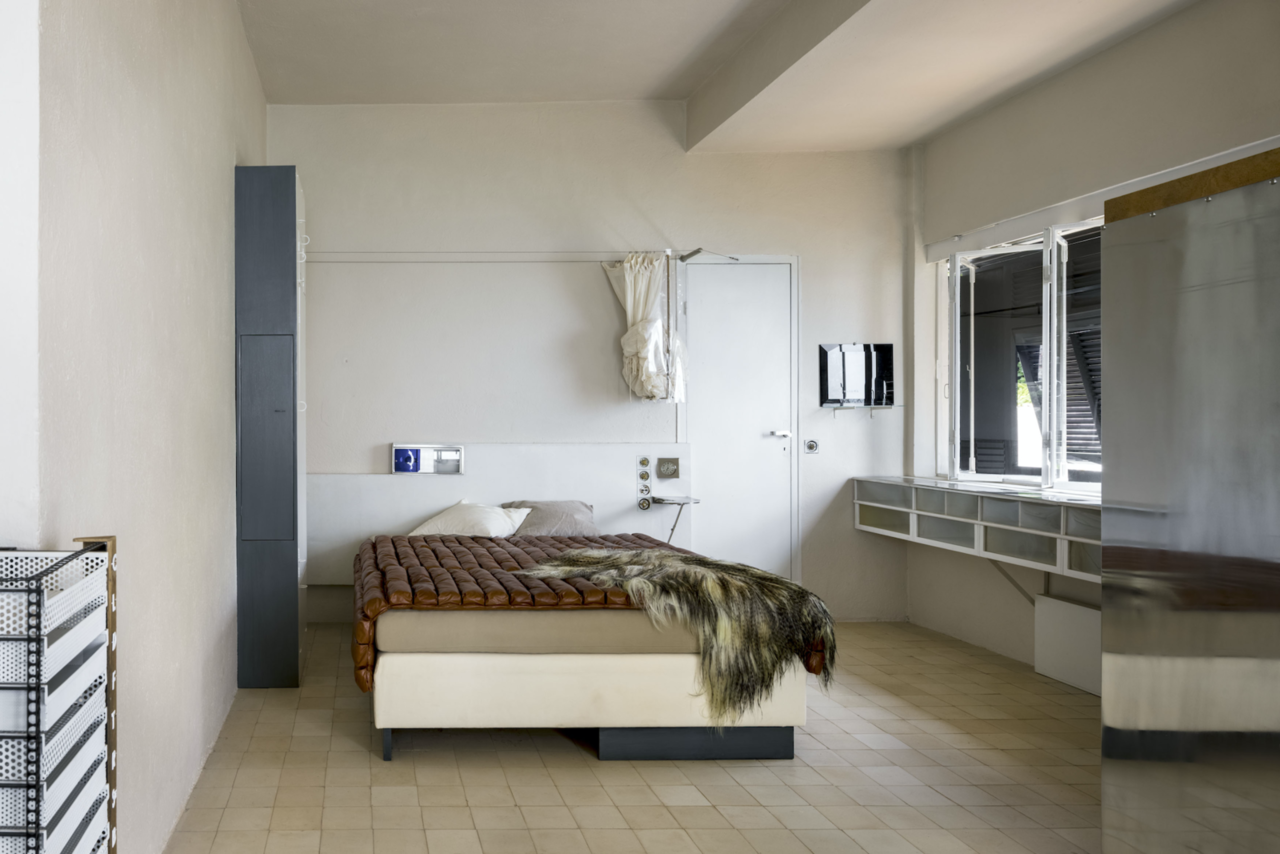 Gray oriented E-1027’s primary bedroom so that the rising sun would shine directly through the bedside window and then shift to illuminate the work area as the morning progressed. The ingenious headboard design includes an alarm clock, hot water device, and bookshelf.

Following Badovici’s death in 1956, E-1027 fell into shocking disrepair. In the 1980s, almost all of Gray’s original furniture was secretly auctioned off by a friend of the subsequent owner. Visitors who stopped by reported vagrants living in the house and most of the fixtures damaged or looted. 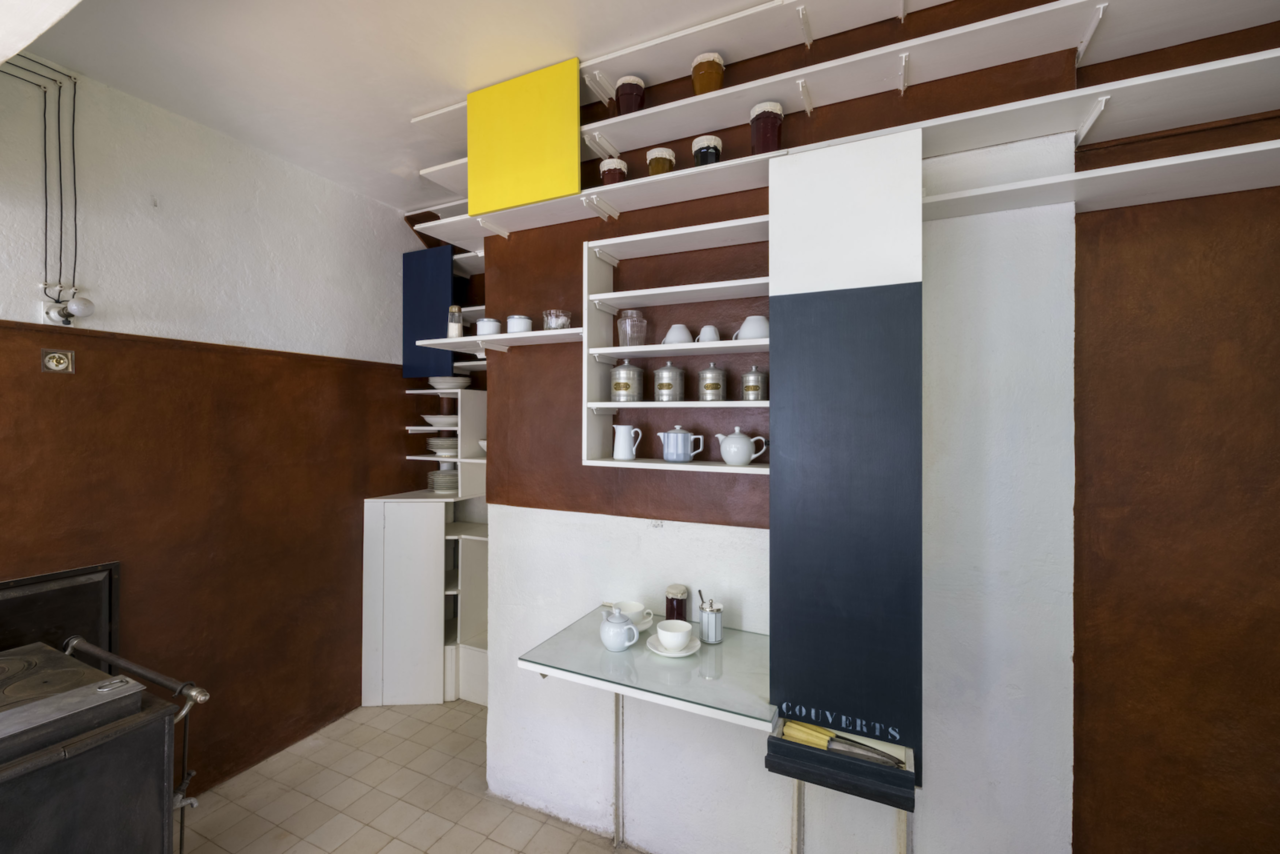 Much of the furniture Gray designed for the 1,400-square-foot villa was built-in to save space. A fixed silverware nook in the kitchen pantry features a painted label that reads: Couverts. 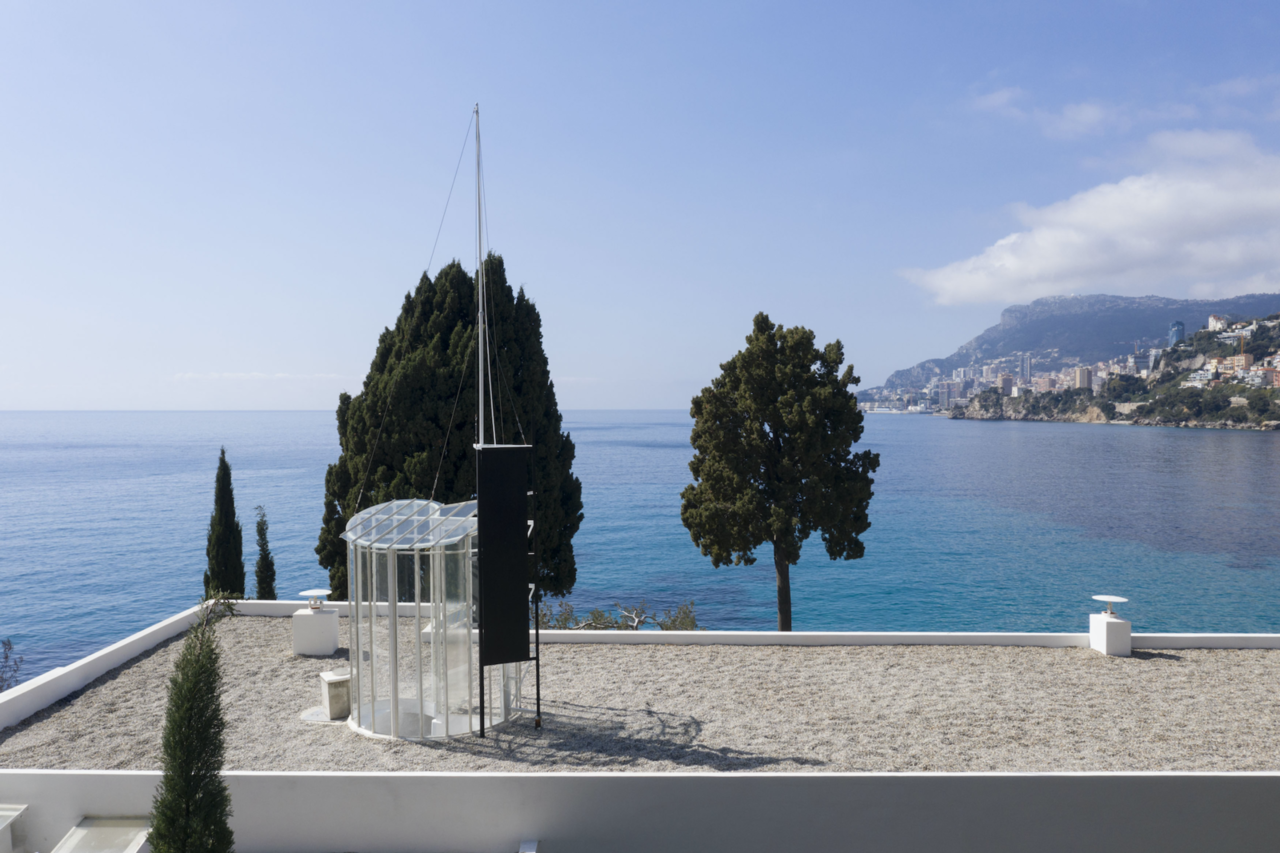 E-1027’s long, flat rooftop is accessed by a spiral staircase and enjoys a view of Monaco across the water. When the entryway door is open, its nautilus curve catches the cooling breeze and funnels it down through the center of the villa.

Ironically, Le Corbusier's murals-considered an insult to Gray when they were created-were eventually responsible for saving her masterpiece. In 1999, the French and local government bought the nearly ruined villa in order to conserve the paintings, but slowly, Gray’s reputation as an architect gained favor and her role in E-1027’s history was recognized.

Gray’s design for E-1207 employs the intense Mediterranean sun as an architectural element. The sailcloth awnings adjust to allow as much direct light as the inhabitants desire, while the balcony admits the ocean breeze into the living spaces, plus stellar views of the garden and sea. 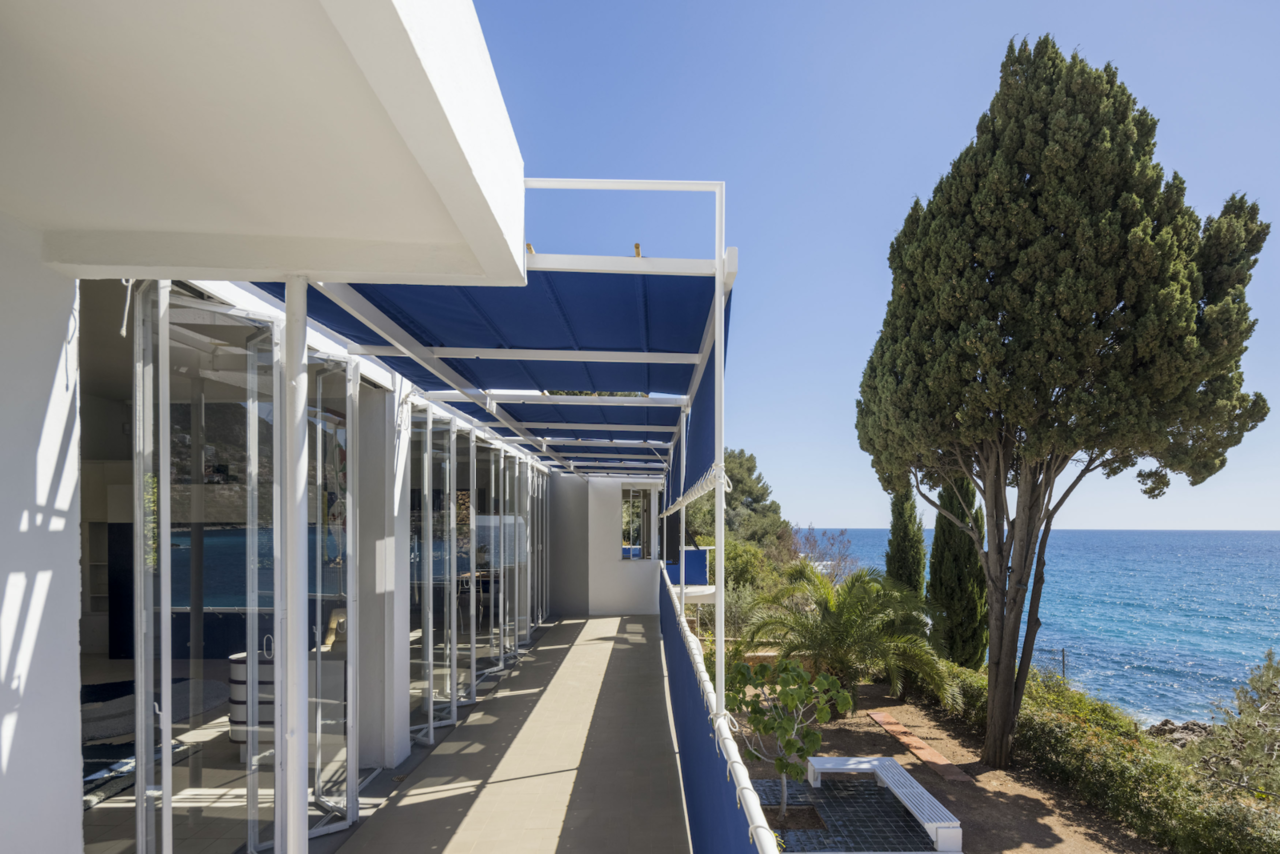 In 2014, a full restoration project was taken over by the Cap Moderne Association, which through fundraising and meticulous adherence to the remaining plans and photographs has brought E-1027 back to its 1929 condition. The original furniture has been replaced with careful replicas of Gray’s designs, including her upholstered Bibendum and Nonconformist armchairs and the adjustable E-1027 table. The villa’s whitewashed walls-once marked by crumbling plaster and faded paint-have been also carefully restored, and the overgrown gardens are now tamed. As of June 2021, Eileen Gray’s elegant house by the sea is once again open to visitors.