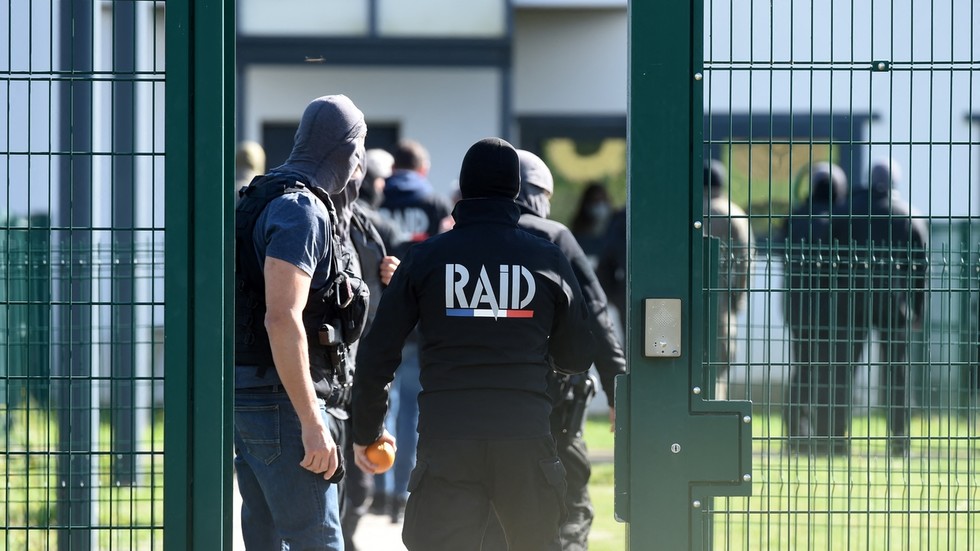 A violent inmate has taken two guards hostage in a high-security prison in north-western France. The man surrendered only after the police and the prison administration deployed two elite units to the scene.
The hostage crisis unfolded at France’s Conde-sur-Sarthe penitentiary – a high-security prison housing some dangerous inmates – early on Tuesday morning when a violent prisoner took two prison supervisors hostage.

The inmate attacked and injured one of the guards before locking him with another guard in his own cell, French media reported. The man wielded a hand-crafted 15-centimeter-long blade, a member of the elite prison intervention unit ERIS told BFMTV.

The prisoner reportedly sought to negotiate the conditions of his prison sentence with the prison administration, according to some reports. The man is serving a life sentence over rape and attempted murder, with a minimum term of 22 years.

Two elite intervention units – the ERIS of the prison administration and RAID of the French National Police – were deployed to the scene to deal with the situation. Eventually, the inmate released the hostages and surrendered without any further violence after negotiations with RAID later in the day.

French Justice Minister Eric Dupond-Moretti confirmed that the “hostage-taking situation was over” on Twitter, as he expressed his support to the two prison guards and congratulated the members of the elite units on “making this swift outcome possible.”

One of the guards reportedly sustained a serious injury to his eye during the incident, while another one was left unharmed.

The inmate in question, whom some French media identified as Sofiane Rasmouk, appears to be known for a series of extremely violent crimes that earned him the nickname, the ‘monster of Colombes’.

The man was convicted as many as 20 times between 2002 and 2012 for various offenses, and was described as a “recidivist psychopath” by French media. One of his relatives told Le Figaro back in 2016 that Rasmouk was “crazy and could become violent at any time.”

In 2013, he assaulted and raped one young woman and attempted to rape another, beating her nearly to death and leaving her severely disabled in the town of Colombes, just north-west of Paris. He was sentenced to life in prison in 2017, and was initially sent to another prison in Baois-d'Arcy.

He was transferred to Conde-sur-Sarthe in mid-September, following an earlier attack on a prison guard in 2018 in which he reportedly attempted to attack the warden with a handmade knife, but was overpowered and restrained.