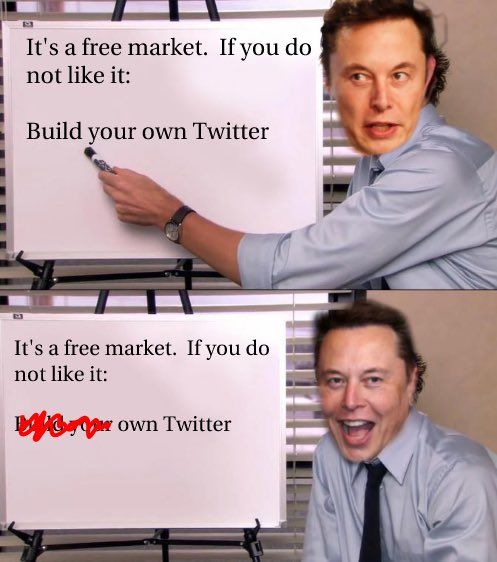 Billionaire Elon Musk’s likely acquisition of Twitter has stirred a debate in the United States around freedom of speech and the role of social media platforms in regulating the flow of information.

Musk had complained about Twitter’s moderation of posts that it deems hateful or classifies as disinformation prior to his push to take over the company, but it remains unclear how the potential change of ownership may affect the day-to-day user experience.

The Twitter board unanimously agreed to sell the platform to Musk for $44bn on Monday, but the deal still requires the approval of shareholders, the social media giant said in a statement.

Many US conservatives are cheering the prospect of a less regulated Twitterverse, with the House Republican Conference urging Musk to reinstate the account of former President Donald Trump, which was indefinitely suspended after the January 6, 2021 US Capitol riot.

But others have expressed dismay at the possibility the platform would allow hate speech and disinformation to spread without safeguards.

“Mr. Musk: free speech is wonderful, hate speech is unacceptable. Disinformation, misinformation and hate speech have NO PLACE on Twitter,” the National Association for the Advancement of Colored People (NAACP), a US civil rights advocacy group, said in a statement.

The group warned against permitting Trump back on the platform or allowing Twitter to become a “petri dish” for falsehoods. “Protecting our democracy is of utmost importance, especially as the midterm elections approach. Mr Musk: lives are at risk, and so is American democracy,” it added.

But Florida Governor Ron DeSantis, a prominent Republican and potential 2024 presidential candidate, said Musk’s offer to buy Twitter “raises the prospect that the platform will be a place where free speech can thrive, not a tool for narrative enforcement”.

Musk himself invoked “free speech” after the company’s board approved the purchase on Monday.

“Free speech is the bedrock of a functioning democracy, and Twitter is the digital town square where matters vital to the future of humanity are debated,” Musk said in the same Twitter statement announcing the deal.

“I also want to make Twitter better than ever by enhancing the product with new features, making the algorithms open source to increase trust, defeating the spam bots, and authenticating all humans. Twitter has tremendous potential – I look forward to working with the company and the community of users to unlock it.”

But the former president himself has ruled out returning to the social media platform, where his posts while he was in the White House constantly stirred controversy – and at times caused international diplomatic crises.

“I am not going on Twitter, I am going to stay on Truth,” Trump told Fox News, referring to his own social media platform. “I hope Elon buys Twitter because he’ll make improvements to it and he is a good man, but I am going to be staying on Truth.”

For its part, the White House expressed “concern” over the power of social media. Press Secretary Jen Psaki said she would not comment on a specific transaction or any potential policy changes that could take place, however.

“What I can tell you is a general matter: no matter who owns or runs Twitter, the president has long been concerned about the power of large social media platforms,” she told reporters on Monday afternoon.

US President Joe Biden “has long argued that tech platforms must be held accountable for the harms they cause”, including through legislative efforts to require more transparency, Psaki added.

“In terms of what hypothetical policies might happen, I’m just not going to speak to that at this point in time.”

Amnesty International USA’s director of technology and human rights, Michael Kleinman, also said that regardless of ownership, “Twitter has a responsibility to protect human rights, including the rights to live free from discrimination and violence and to freedom of expression and opinion – a responsibility that they already too often fail”.

“We are concerned with any steps that Twitter might take to erode enforcement of the policies and mechanisms designed to protect users. The last thing we need is a Twitter that willfully turns a blind eye to violent and abusive speech against users, particularly those most disproportionately impacted, including women, non-binary persons, and others,” Kleinman said in a statement.

Al Jazeera’s Gabriel Elizondo, reporting from New York, said it remains unclear what Musk’s potential ownership will mean for the platform. But “there’s a lot of pushback on this,” Elizondo said. “It’s the consolidation of another social media platform in the hands of a very wealthy person.”

Many progressive Democrats criticised Musk’s wealth and the apparent ease with which he is willing to spend $44bn to buy a social media platform, with several calling for more taxes on billionaires.

“It’s hard to wrap your mind around the concept of a billion, but time is a bit easier to understand. 1 million seconds is roughly 11.5 days. 1 billion seconds is about 31.5 years,” Congressman Mark Pocan wrote on Twitter.