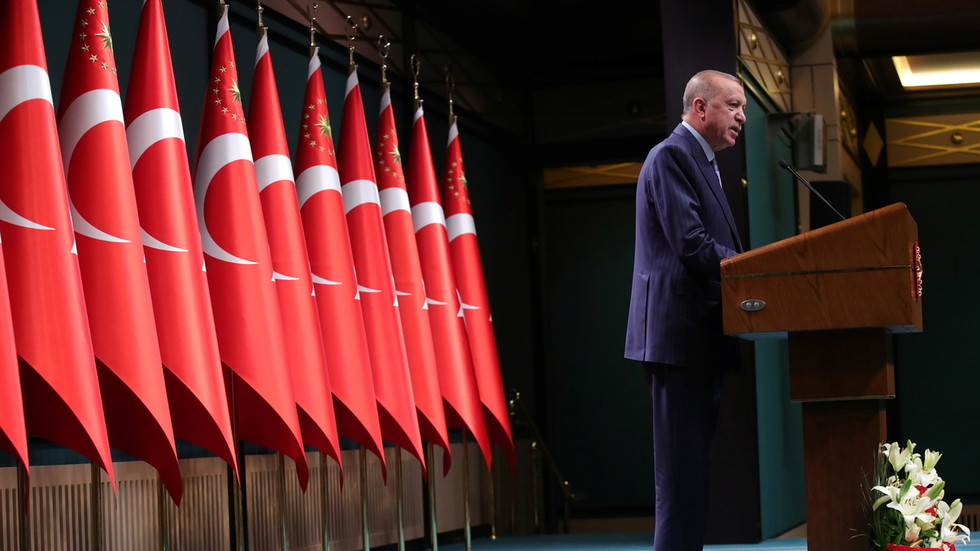 Erdogan backtracks on threats to expel US envoy and 9 other ambassadors, after they pledge to not interfere in Turkey’s affairs

Ankara has backtracked on its threats to declare 10 envoys “personae non gratae” after they called for the release of an opposition figure even though their embassies had officially vowed not to interfere in the country’s affairs.
The apparent resolution of the diplomatic row was announced by President Recep Tayyip Erdogan following a government meeting to discuss the potential expulsion of the ambassadors late on Monday.

Shortly before the meeting, the US Embassy, along with as well others involved in the scandal, released a statement pledging their compliance with Article 41 of the Vienna Convention on diplomatic relations, which states that missions must not interfere in the affairs of the host country.

Erdogan reiterated his displeasure with the original statement by the 10 envoys, calling it a “great insult” to the country’s judiciary, which “does not accept anyone’s orders.” He acknowledged the “step back” by the embassies, however, signaling that the row was resolved.

“Our intention is not to create a crisis, and those embassies backtracked in their statement of adherence to the Vienna Convention. We expect the ambassadors to act accordingly from now on,” Erdogan stated.

Shortly after the president’s announcement, his most senior aide, Fahrettin Altun, warned that the country would take further steps against the offending ambassadors if it deemed it necessary.

“Our Foreign Ministry has already given the necessary response to these foreign missions and warned them about their unacceptable behavior,” Altun said on Twitter. “Our government will not shy away from any further steps to show that we will never compromise our national sovereignty.”

The bitter diplomatic row unfolded last week, after the embassies of the US, Canada, Germany, France, Finland, Sweden, Denmark, Norway, New Zealand, and the Netherlands released a joint statement urging a speedy and just resolution to the case of Osman Kavala, a Turkish businessman and philanthropist. Kavala has been held in jail without conviction since 2017, facing assorted charges ranging from financing the 2013 Gezi Park protest to taking part in the botched 2016 coup attempt.

While the philanthropist has already been tried and acquitted twice, orders for his release have been overturned immediately after his acquittal and replaced with new charges. While the authorities claim Kavala is an agent of US billionaire George Soros, his supporters believe him to be a political prisoner targeted for standing up to the rule of the increasingly authoritarian Erdogan.

The ambassadors’ statement invoked a furious reaction in Turkey, and they were summoned to the Foreign Ministry to account for their “irresponsible” behavior. Over the weekend, Erdogan said he had instructed Turkey’s diplomacy chief to declare the envoys ‘personae non gratae’ as soon as possible. No official notification about such intent, however, actually came from Turkey, according to Germany’s and France’s Foreign Ministries.