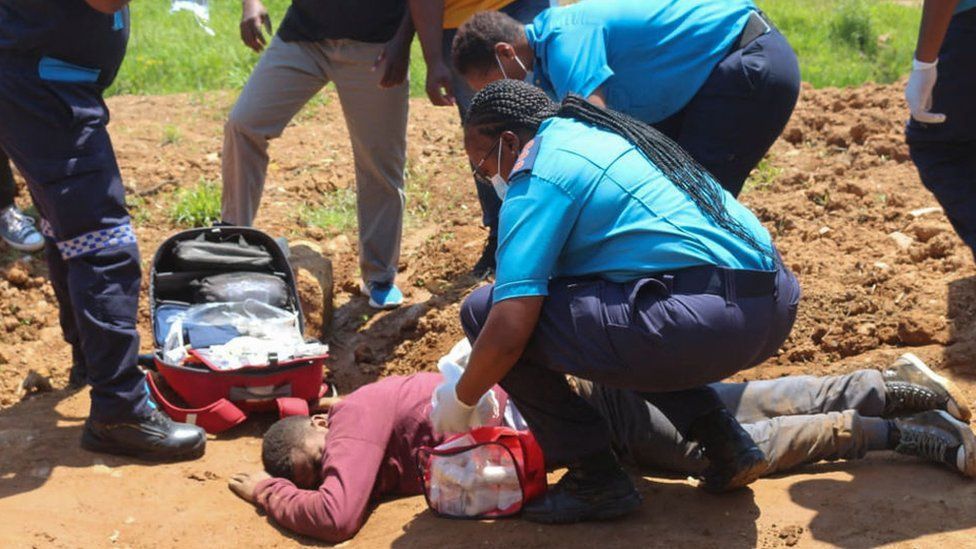 The health workers say security forces injured 30 colleagues when they opened fire at a protest.
Protests in Africa's last absolute monarchy, formerly known as Swaziland, have swept the country since June.
Some internet services, such as Facebook, were temporarily shut down this week in response to the unrest.

The government, which denies that security forces used live ammunition, has now banned all demonstrations.

"We have no reports of nurses being shot," a government spokesperson told BBC Focus on Africa.

"Police are on the streets to maintain law and order, there is no willy-nilly shooting."

He added that Eswatini was a country founded on peace and dialogue.

On Friday nurses were protesting at three hospitals, reports say.

The Swazi News Twitter account has shared a video which it says shows nurses demonstrating at the Nhlangano Health Centre in the south of the country.

Earlier this week, health workers and other public sector employees, who went to deliver a petition to parliament demanding better living conditions, were met with an "unprecedented show of force", the Swaziland Democratic Nurses Union (SDNU) said.

Thirty nurses were injured as the police and army opened fire and a young bystander was killed, the union added.

Describing the security forces as a "brood of vipers", SDNU called on all nurses "in solidarity with the shot nurses not to treat a police official".

Union president Welcome Mdluli acknowledged that this goes against the principle of treating everyone but he told the BBC that his members were now scared of the police.

"We have reports of police shooting health care workers inside the hospital... we are scared of them," he said.

Mr Mdluli now wants a guarantee from the ministry of health that nurses will be safe before the treatment boycott will end.
A delegation from the regional grouping, the Southern African Development Community, is currently in the country to meet King Mswati III, as well as some involved in the pro-democracy movement.

"Images that are coming from Eswatini are very disturbing indeed, and we can see that the political temperature is very hot," Jeff Radebe, who is leading the delegation, told the South African public broadcaster before he travelled.

The health workers have joined students, transport workers and others in a wave of protests calling for major constitutional reforms that will allow them to elect their own leaders.

The demonstrations have also been fuelled by the stark inequalities in the country. In 2016, just under 60% of the population were living in poverty, according to the World Bank.

Student protests led to the indefinite closure of all schools on Monday, a move that was criticised by UN Secretary General António Guterres.
#Facebook  #ANT