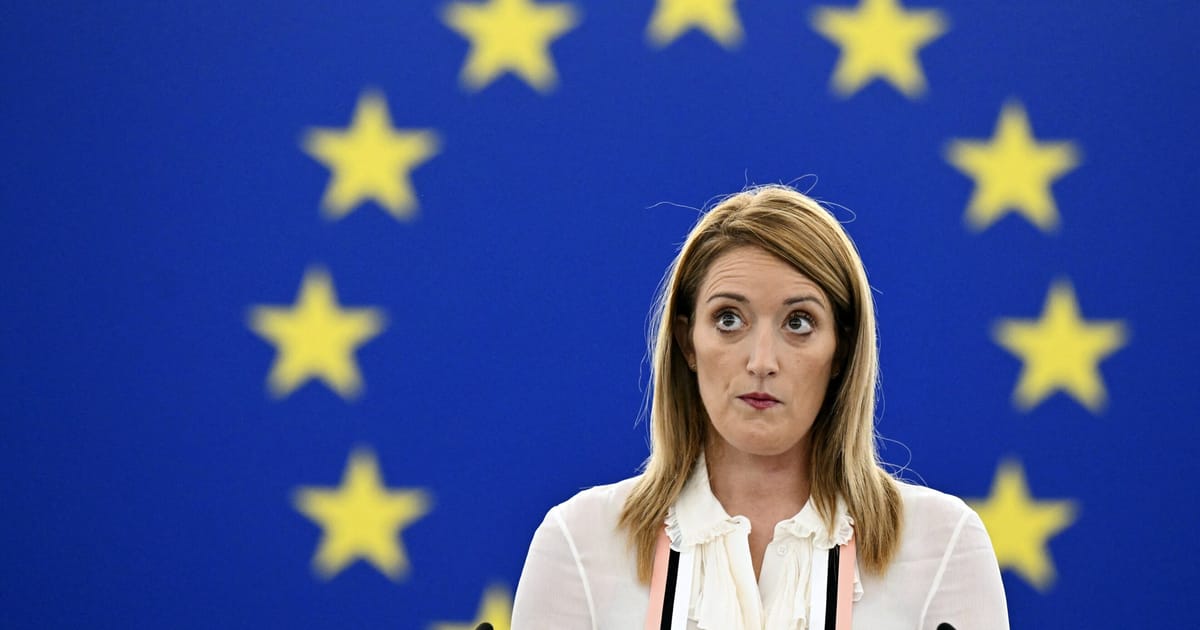 EU leaders try to sideline Qatar scandal — while they still can

A corruption scandal has inflamed the Parliament just as EU leaders gather on Thursday for one of their regular summits. And the explosive revelations — bags of cash, possible influence peddling involving Qatar and Morocco — have reversed the script.

Normally, when EU leaders get together, the Parliament president attends, and barely anyone notices. The appearance is typically brief. The press conference is sparsely attended.

Parliament President Roberta Metsola will arrive at the European Council Thursday morning to a sea of cameras, as the media continues to chronicle the allegations swarming around the EU’s popularly elected body. She is due to update the EU’s 27 national leaders on the troubling details that have caused at least one MEP to be arrested on suspicions of corruption.

But for most EU leaders, it’s a case of “not my problem.”

“Really this is an issue for the Parliament,” said one European Council official. “We expect to get a debrief from Metsola, but nothing more.”

The European Council’s instinct to try and sidestep malfeasance allegations at the heart of the EU could be self-defeating — and store up problems for the EU in the long term.

“The potential reputational damage here can be immense,” Petros Fassoulas, secretary general of the pro-EU organization European Movement International, told POLITICO. “Most people don’t distinguish between one institution or another. The issue is that once you put the word corruption next to any European institution, people automatically associate the EU with the act of corruption.”

Looming in the distance is the 2024 European elections — the once-every-five-years exercise that is the nearest thing the EU has to a bloc-wide election.

The European elections have traditionally been a place for anti-EU forces to make their voices heard. Indeed, some of the EU’s biggest critics — Britain’s Nigel Farage and France’s Marine Le Pen come to mind — have grabbed attention in the European Parliament before moving home to spread their Euroskeptic message further.

Now there is a fear that the Qatar scandal, which has rocked Parliament, could discredit the institution even more.

“This scandal risks playing straight into the hands of anti-European, anti-democratic forces,” Fassoulas said. “It’s vital that the EU gets ahead of this, especially in light of the European elections in 2024.”

Apart from Metsola’s scheduled debrief to EU leaders Thursday morning, no further discussion of the scandal is on the official agenda for Thursday’s gathering. One diplomat said that the leaders’ response may depend on what she has to say.

EU leaders have also plenty of other issues to discuss.

Deep divisions have emerged over the European Commission’s plan to counter packages of U.S. subsidies they worry are luring investments away from Europe, countries still can’t agree on how (and whether) to cap gas prices, and Romania and Bulgaria remain incensed they’ve not been allowed into the Schengen free-travel zone.

Additionally, there were last-minute hiccups on a multi-layered deal to unlock €‎18 billion in aid for Ukraine and finalize a minimum corporate tax rate, after Poland blocked the proposal late Wednesday.

But in reality, the harsh spotlight being shed on the EU’s relationship with Qatar could be uncomfortable for many countries, especially as calls come to reassess lucrative aviation agreements with Doha.

Several EU members have also upped their reliance on the Gulf state for energy as they seek to wean off Russian gas. In recent weeks, German firms struck a 15-year deal to buy liquified natural gas from Qatar. And on Wednesday, Hungary announced that energy group MVM would begin talks with QatarEnergy about buying LNG gas.

Asked if the allegations about possible cash-for-influence infiltrating Parliament should cause the EU to reassess other commercial interests with Qatar, German Chancellor Olaf Scholz sidestepped the question on Wednesday, keeping the focus on the specificities of the ongoing Belgian case.

“What needs to be reviewed is which accusations are to be made against those who are now confronted with the accusation of having been bribed, and of course this also applies to those who were on the other side, meaning those who bribed,” he told reporters in Brussels.

Not all EU leaders want to duck the issue, however.

Arriving at an EU summit with southeast Asian countries on Wednesday, Irish leader Micheál Martin said the public was “shocked” at what had transpired, and he called for the establishment of an EU-wide body to police the institutions, including Parliament.

“The whole idea of an overseeing body to ensure compliance and adherence to ethics is required,” he said. “Obviously, due process has to take place but nonetheless, people must have confidence in European Union institutions, and particularly the European Union Parliament, because it has increased its powers over the years.”

Other leaders echoed a view that many Parliament members espoused this week — that the corruption allegations don’t point to a systemic problem, only a few bad apples. Speaking in Brussels Wednesday, Estonian Prime Minister Kaja Kallas conceded that the revelations were damaging “not only to the European Union but also to European politicians.”

“I must confirm and say we are not all like this,” she added, noting that having these cases out in public may help prevent them in the future.
#Nigel Farage