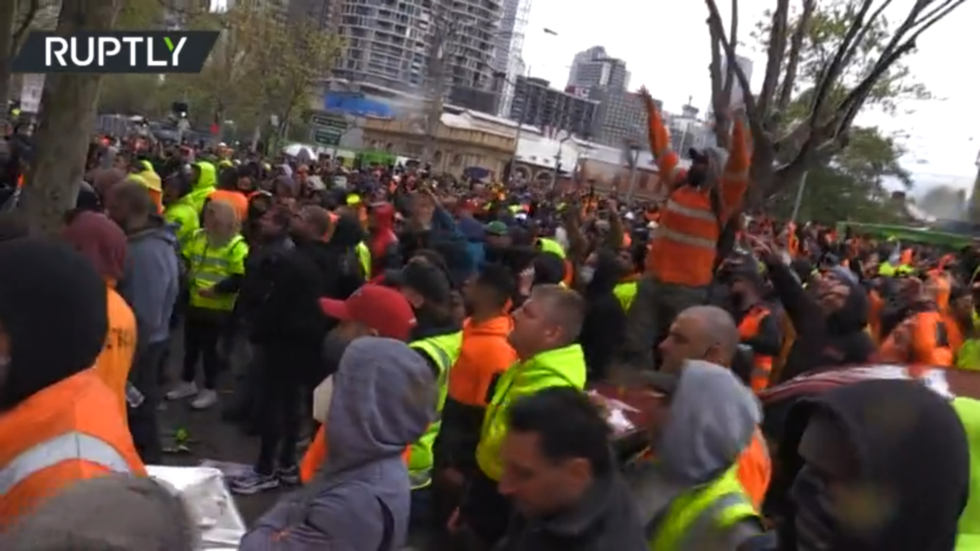 A violent protest against mandatory Covid-19 vaccination erupted outside of a Melbourne trade union office on Monday, after it was announced that construction workers would have to be vaccinated to continue doing their jobs.

Protesters wearing high-vis construction clothing smashed windows, chanted “We are union!” and “F**k the jab,” and threw projectiles at the Construction, Forestry, Maritime, Mining and Energy Union (CFMEU) headquarters. Union officials attempted to barricade the doors and used a fire extinguisher to spray demonstrators from inside.

Others tried to diffuse the situation, waving their hands in the air and shouting for those engaged in the violence to stop, but to no avail.

Melbourne riot police eventually turned up to the scene and approached protesters in formation carrying shields, batons, and guns.

Protesters shouted “Freedom” and “F**king w**ker” at police officers, while one man appeared to threaten a Ruptly journalist who was recording the scene.

Following the incident, CFMEU National Construction Secretary Dave Noonan blamed the violence on “far-right extremists,” claiming that the crowd “was heavily infiltrated by neo-Nazis and other right-wing extremist groups” and that only “a minority of those who participated were actual union members.”

“The union will continue to defend its members' rights to work safely across Australia and we will not be intimidated from doing our job,” Noonan declared. “These are not actions of people who care about their workmates and the construction industry. They are the actions of extremists or people manipulated by extremists.”

The Australian Council of Trade Unions (ACTU) also blamed “right-wing extremists and anti-vaccination activists” for the violent protest, calling them “a danger to us all.”

“Australian unions will never be intimidated by violence or threats from extremists who refuse to put the good of the community first,” the ACTU continued, calling on every construction worker to get vaccinated against Covid-19 “as soon as possible.”

Right-wing Israeli-Australian journalist Avi Yemini, however, rejected claims that the crowd was comprised of non-union agitators after reporting on the unrest on location.

“The majority there today were 100% CFMEU members. No matter how you try spin it,” claimed Yemini, who served in the Israeli Defense Forces and worked as a spokesperson for British anti-Islam activist Tommy Robinson.

Melbourne – which has experienced some of the world’s strictest and longest Covid-19 lockdowns – has repeatedly experienced violent protests. On Saturday, an elderly woman was knocked down and pepper sprayed by Melbourne police while protesting lockdowns in the city, sparking concern and condemnation around the world.