Fall Under the Spell of This Remote Glass Cabin in Norway

This year-round mountain retreat is a spectacular escape in the Norwegian wilderness.

When Frode Danielsen invited his then-girlfriend Tone Beathe Øvrevoll on a holiday to Hallvardøy Island in northern Norway, little did he know that she would fall so deeply in love with the area that they would spend the next two years putting down roots on the remote island.

With the support of Danielsen’s family (who lived nearby) and the design expertise of award-winning architect Snorre Stinessen, the couple dove headfirst into creating the retreat of their dreams-and they even documented the entire process on Instagram. 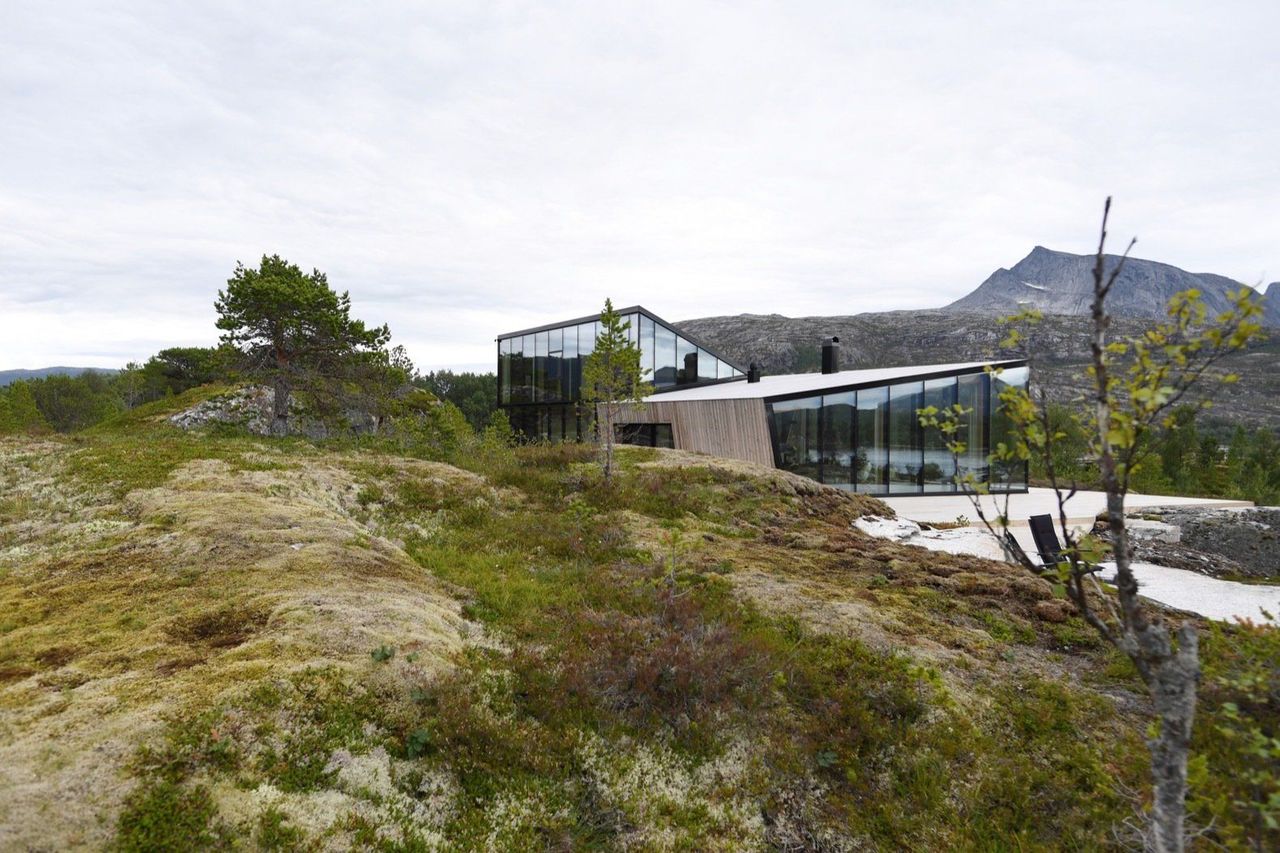 Located on Hallvardøy Island, Efjord Cabin is a year-round retreat for the couple. 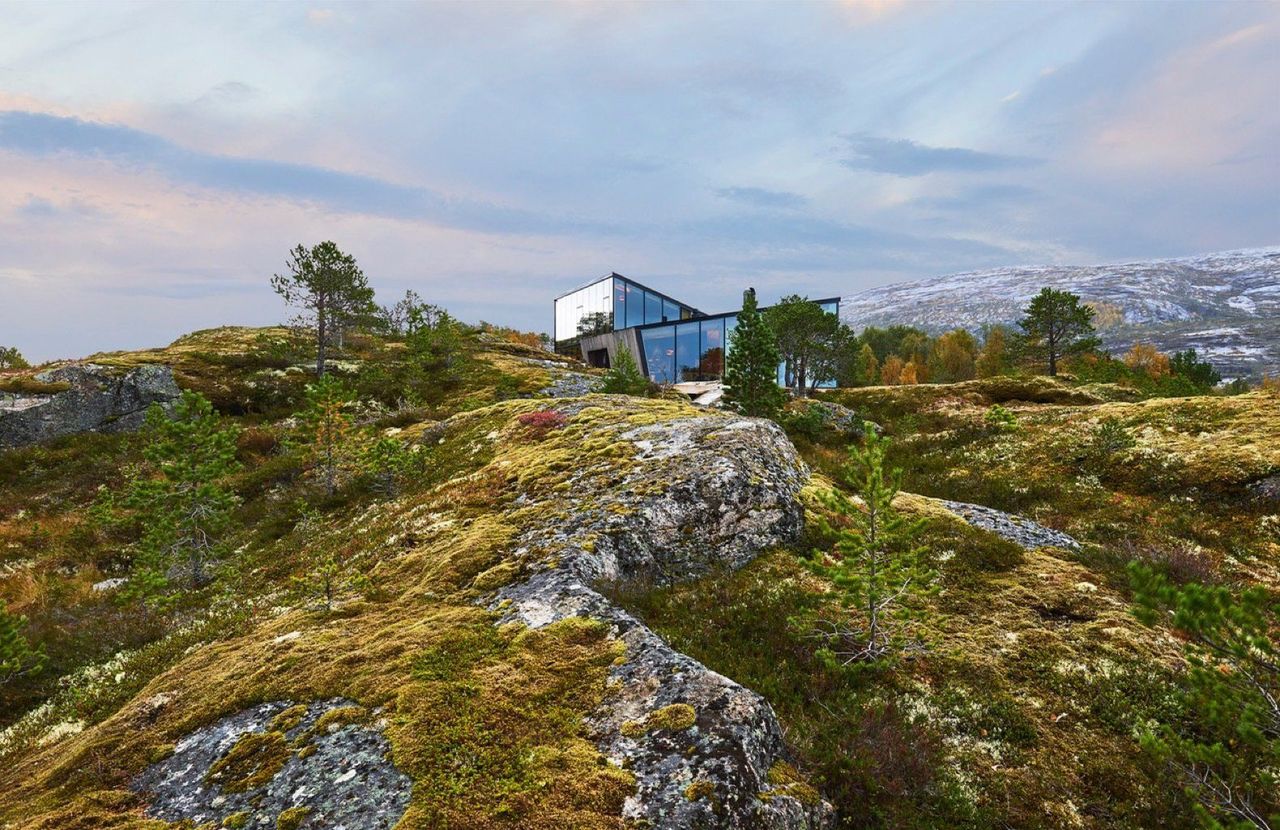 "Frode has a long family history on Hallvardøy Island (in Efjord). His father has a small house next door, and other family members live on an old farm and in some other cabins in close vicinity," shares Stinessen. "The father was also a massive help during the building process. It was truly a family project!"

"It’s actually a beautiful love story," says Stinessen. "These two people met at a grown-up age, each having their own children, and live on opposite sides of the country-Frode lives in Tromsø, Tone in Elverum-but this project became their place to meet and spend as much time together as possible." The couple recently married, and they spent their honeymoon at the Efjord Cabin. 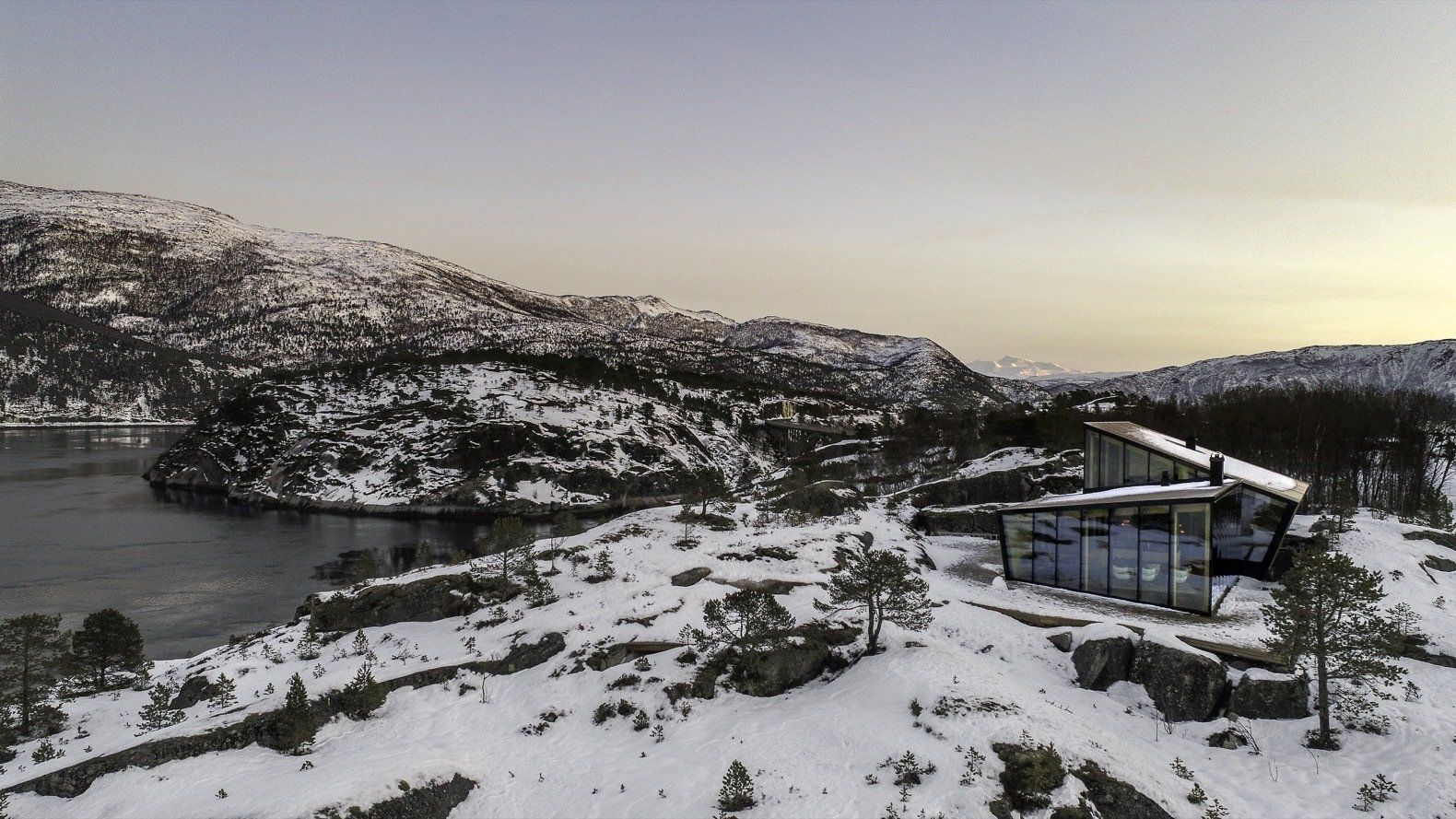 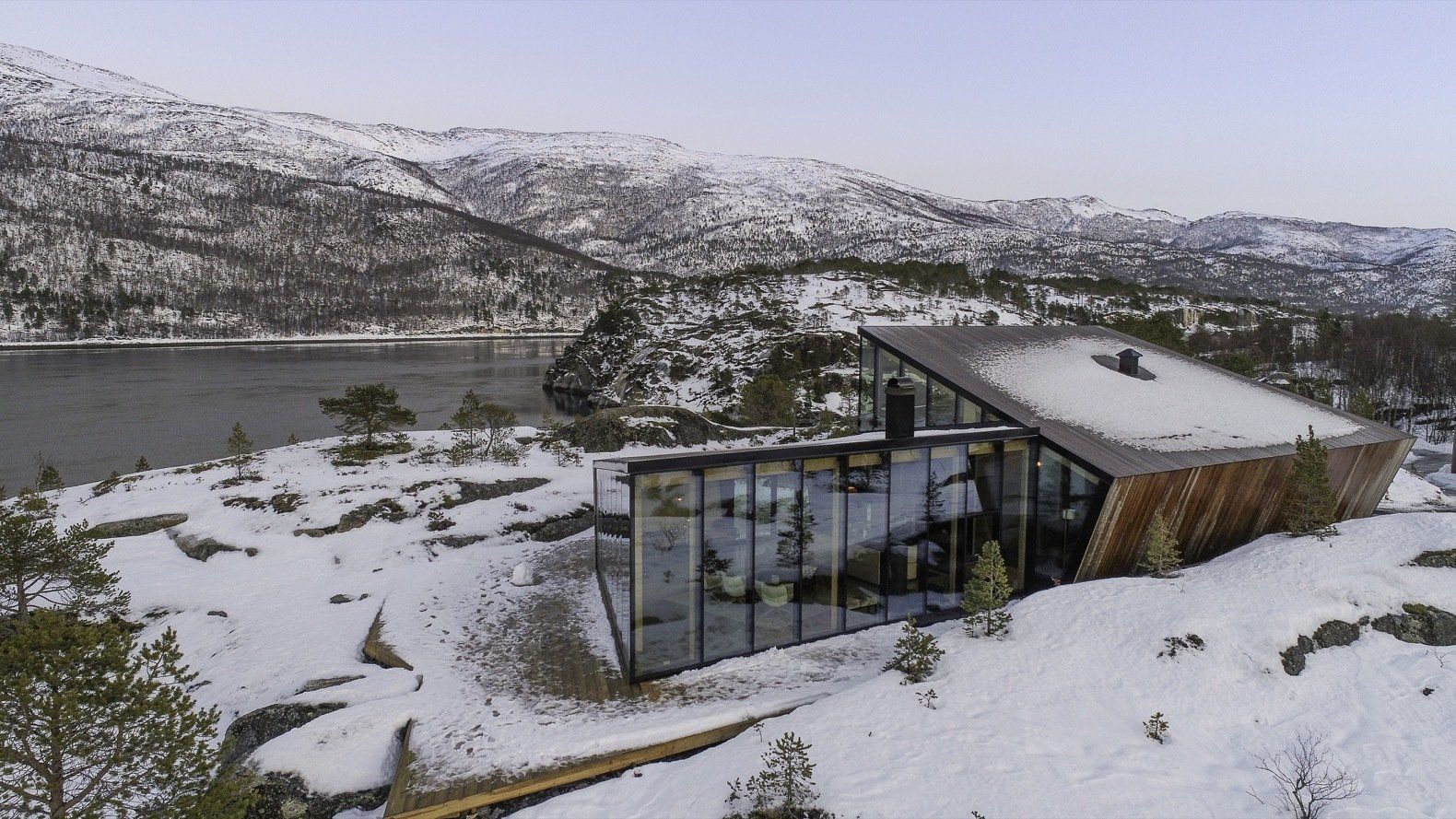 The clients also prioritized the use of local materials, labor, and products while preserving as much natural stone as possible.

The process of creating their dream cabin, however, was no easy task. First, the couple had to work with the Ballangen municipality to develop a completely new zoning plan for the undeveloped area. Once complete, they carefully selected a building site that was naturally flat, so as to minimize site disturbance. The site affords spectacular views of the fjord and mountains, optimal access to daylight, and privacy. 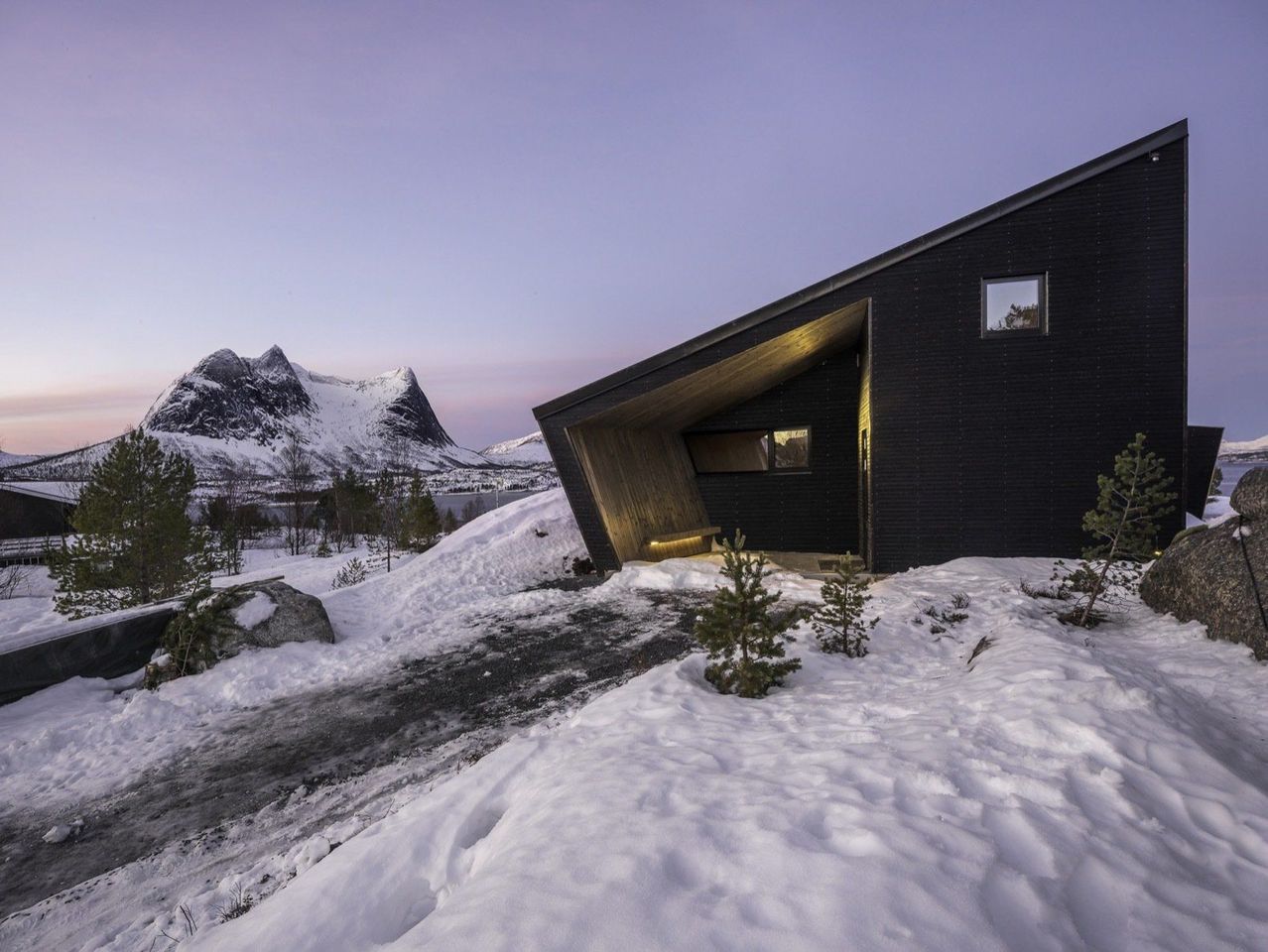 The north side of the cabin is mostly closed off for privacy. 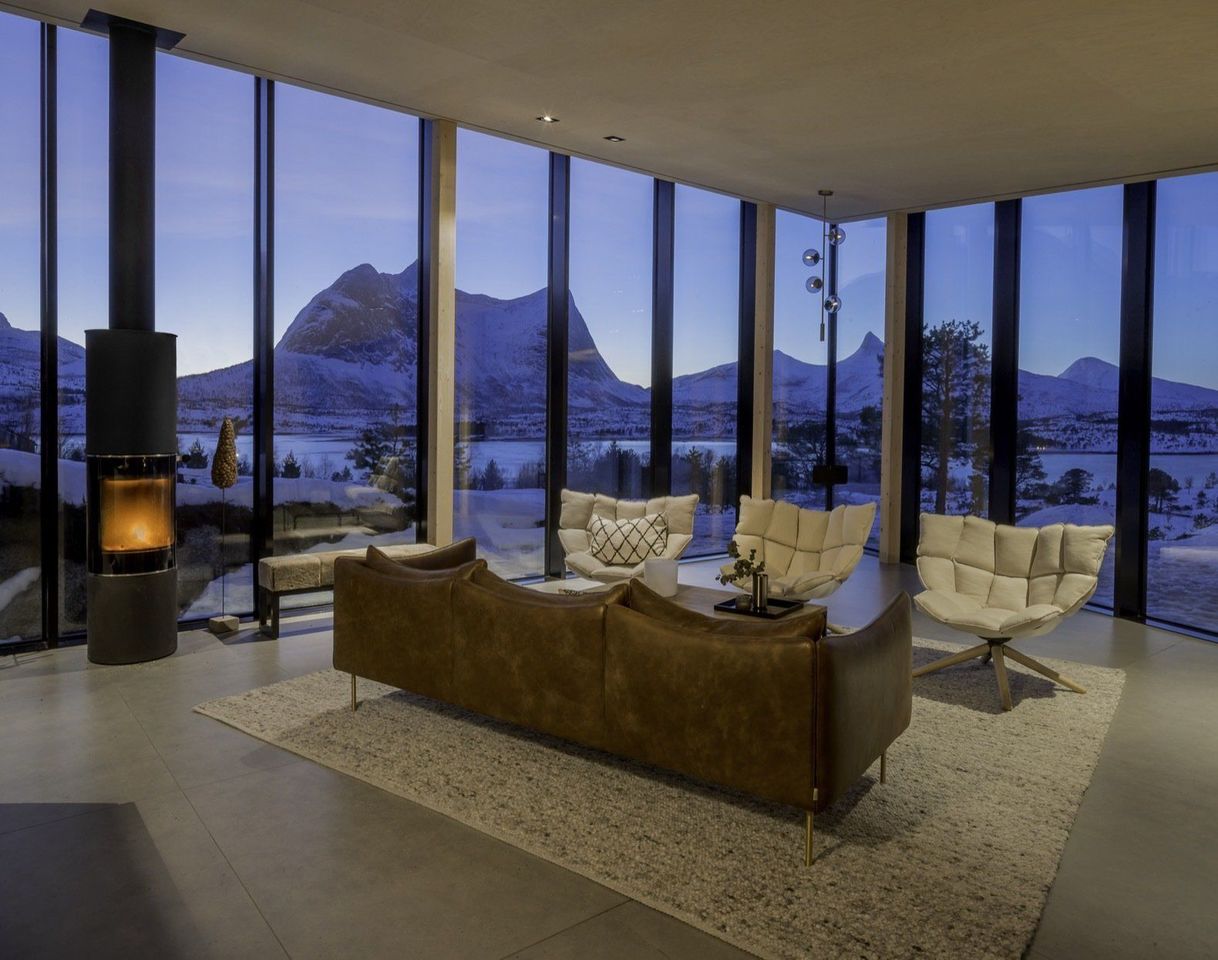 Walls of triple-glazed glass surround the living room, which overlooks two of Norway's most challenging climbing peaks to the south.

"Connection to the place, site, and nature and the actual retreat from hectic daily life were perhaps the core elements they sought," notes Stinessen, who worked closely with his clients to create a sculptural retreat that not only amplifies the beauty of Efjord, but also exudes a sense of warmth to make the couple feel instantly at home. 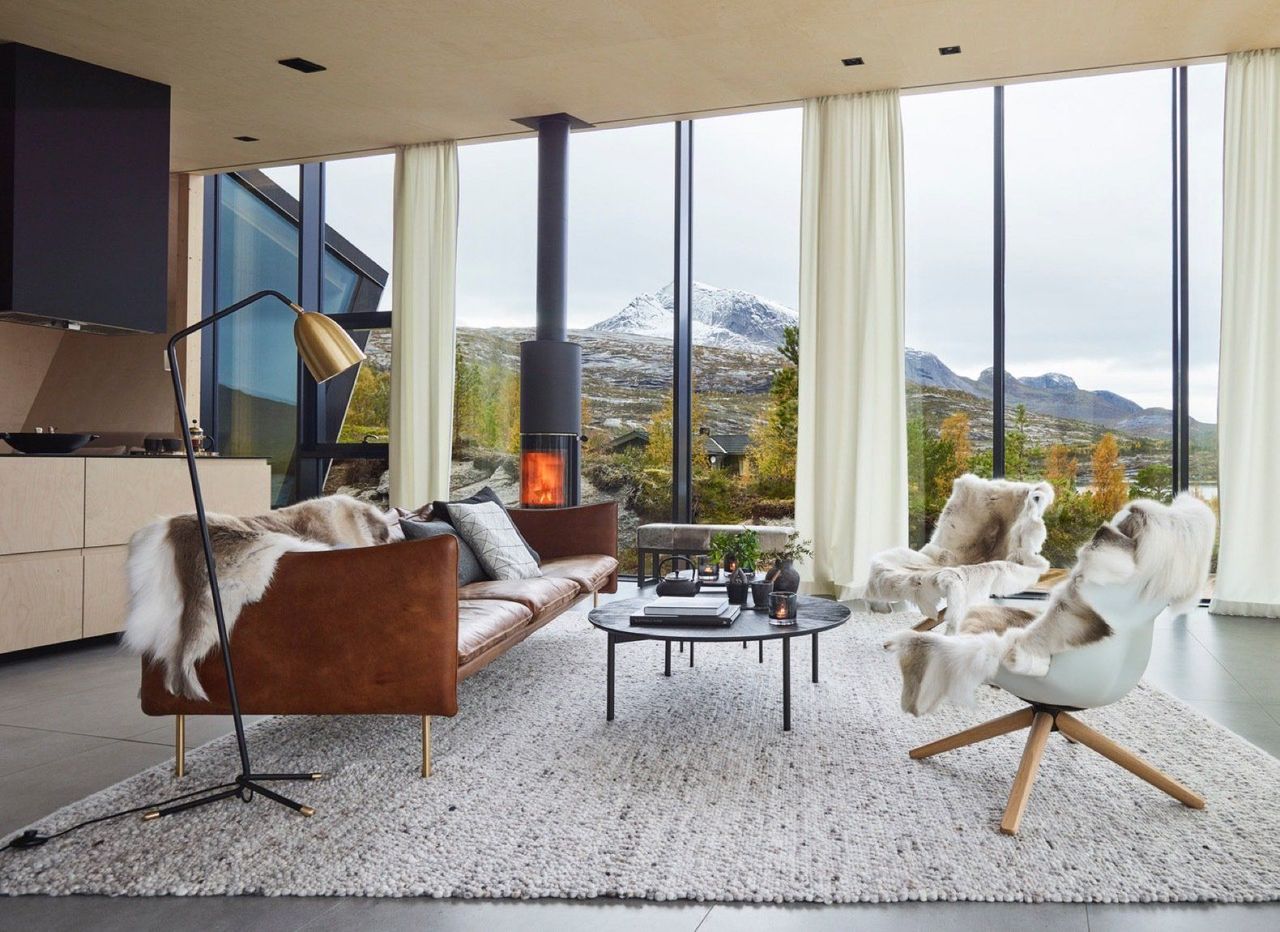 The living room is furnished with Husk chairs by B&B Italia, a Tiki sofa from Fogia, and a Bolia lamp. 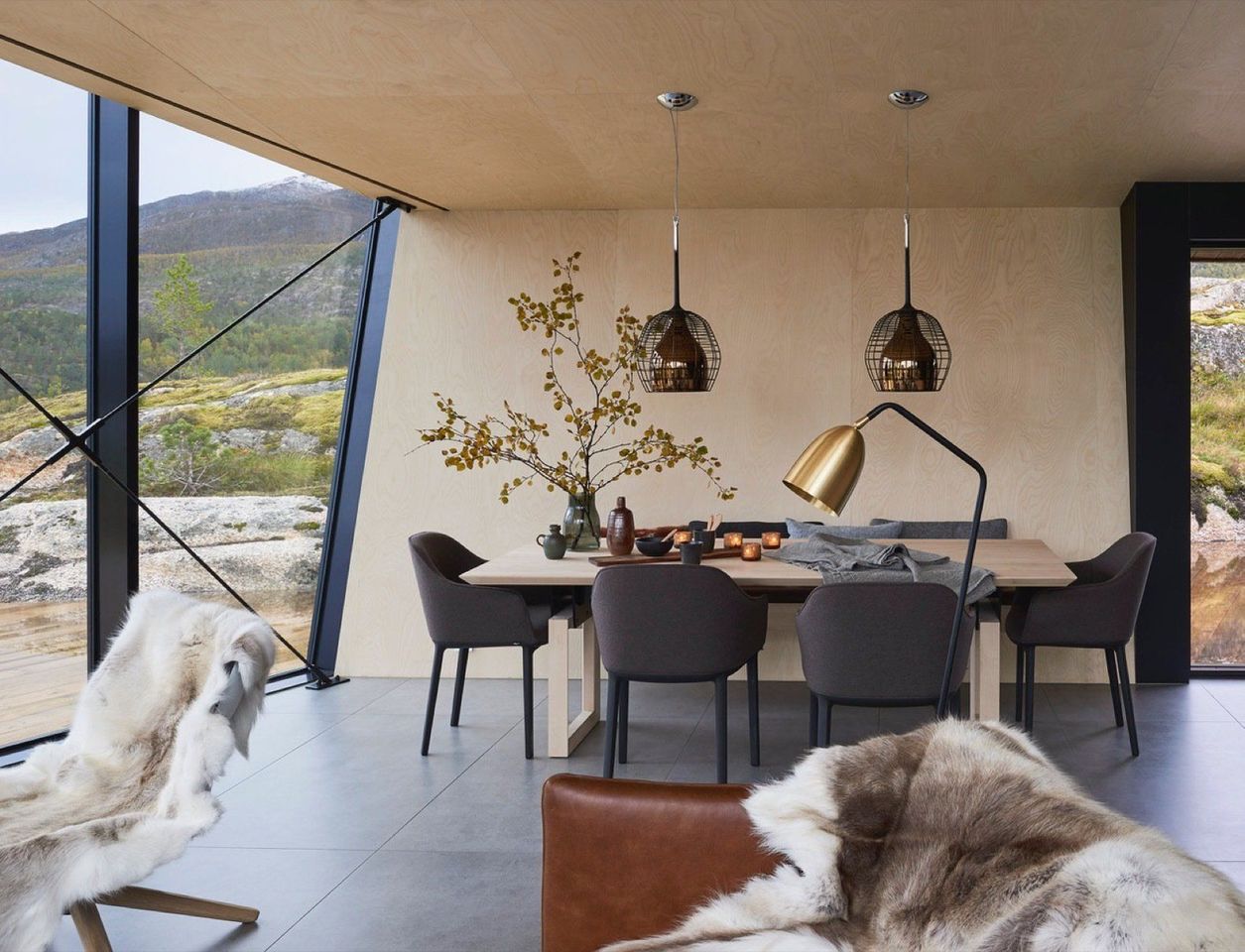 Designed for large gatherings, the open-plan living and dining area is free of columns and large enough to accommodate a nearly 11-foot-long dining table. 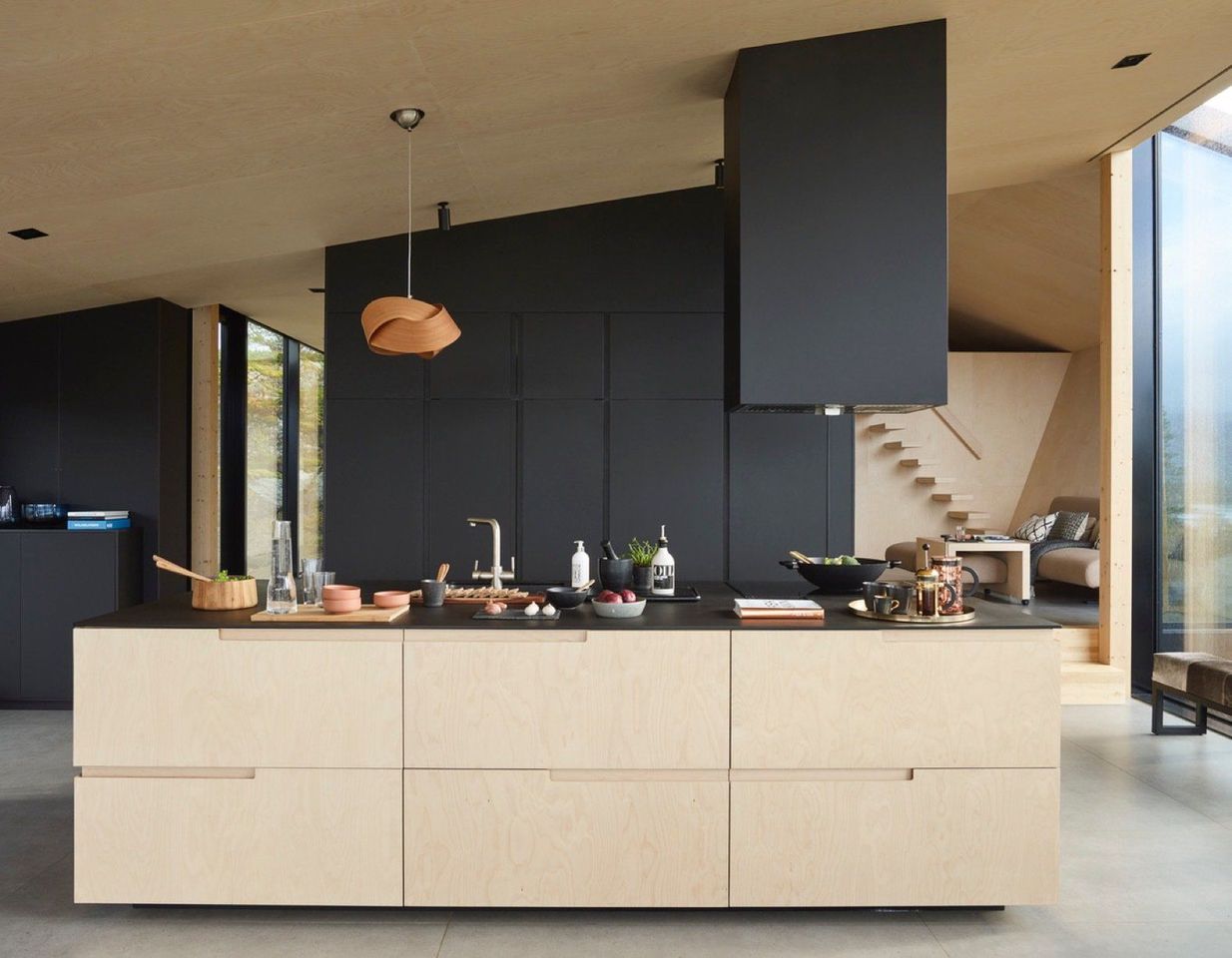 Birch veneer wraps the interior of the minimalist home, lending a sense of warmth.

Taking advantage of the site’s slight slope, Stinessen divided the 2,150-square-foot cabin into two parts: a larger two-story volume containing the bedrooms and sauna, and a smaller volume that houses the open-plan living areas located a few steps below.

"The two volumes are slightly offset to provide sheltered outdoor areas and views towards the fiord from the rear volume," says Stinessen. 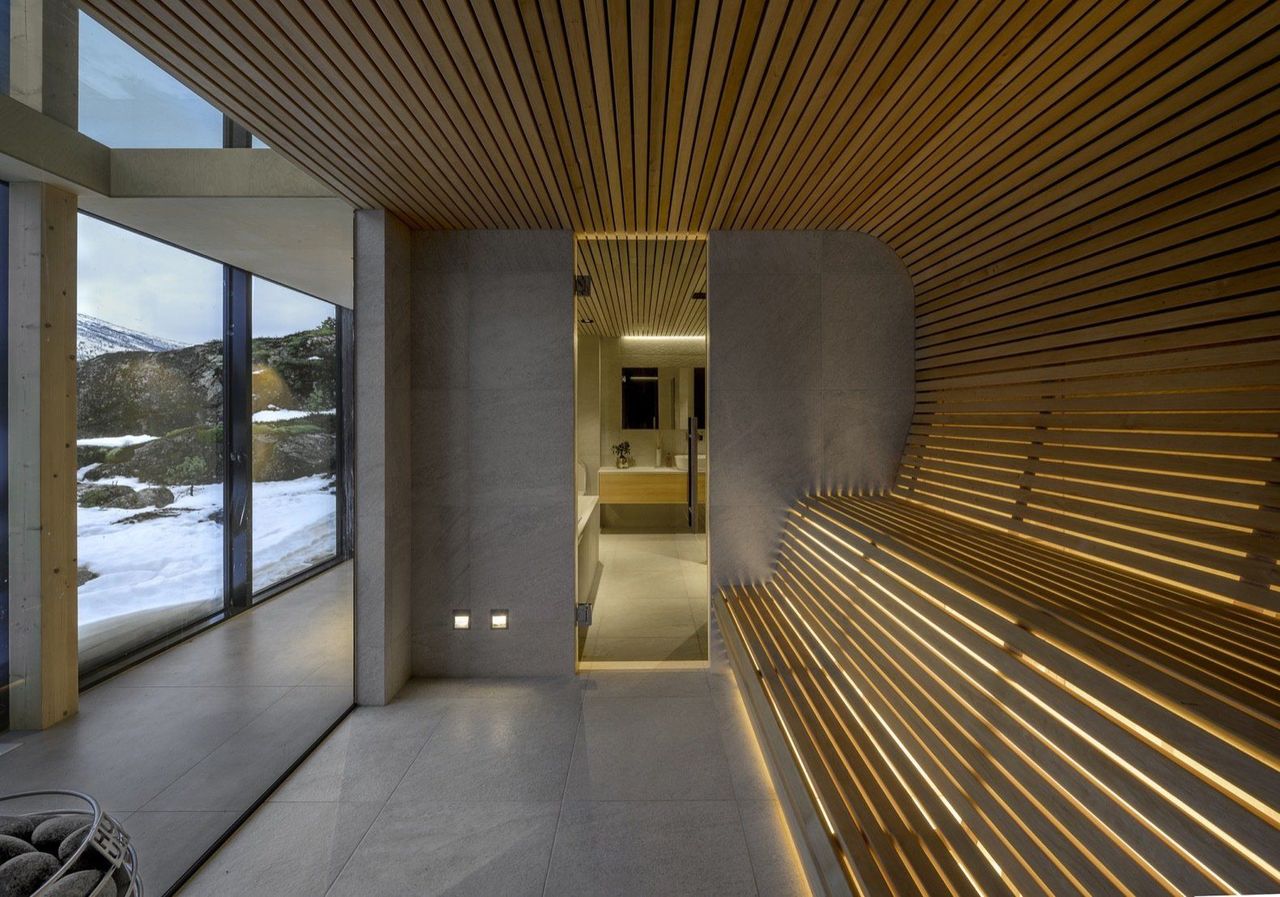 The sauna interior is lined with hygroscopic aspen slats. One-way glass separates the sauna from the hallway and provides views out into the landscape. 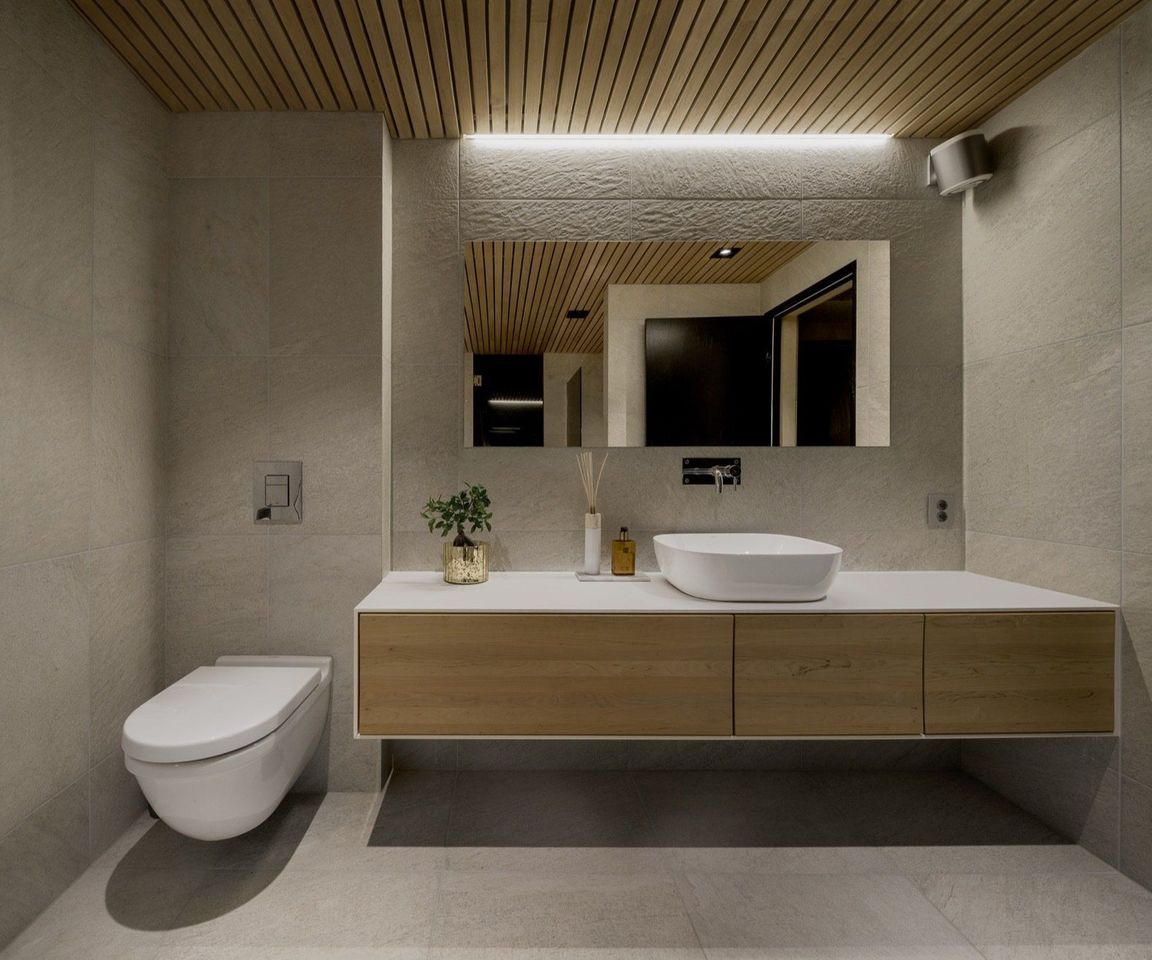 A peek into one of the bathrooms with an aspen slatted ceiling. The bathroom connects directly to the sauna.

"The shape of the building is both a dialogue with the close natural formations, but also with the larger landscape. Its functional aspects create privacy and indoor/outdoor connections to different zones around the building," says Stinessen. 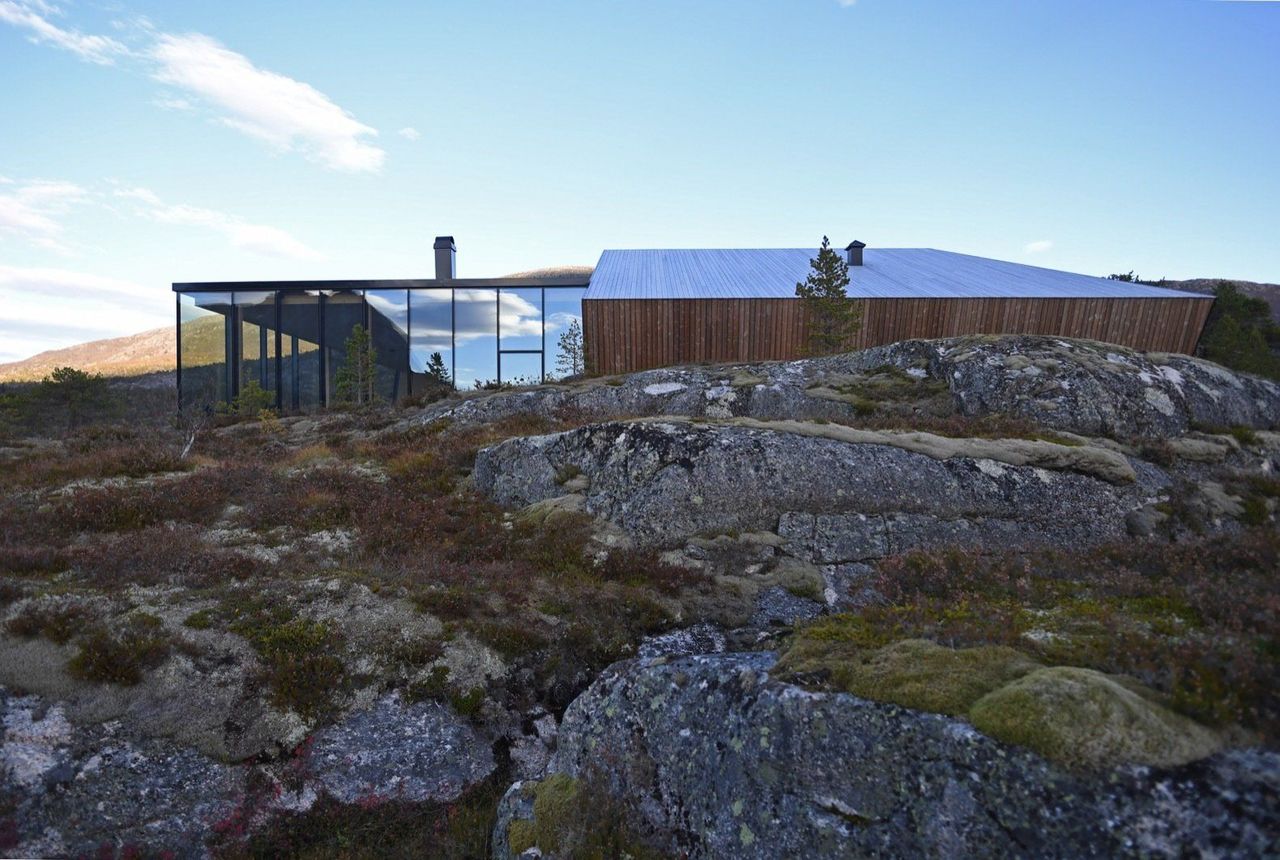 The cabin is sandwiched between two stone formations-a low ridge to the south and a higher ridge toward the north-that informed the shape of the building. 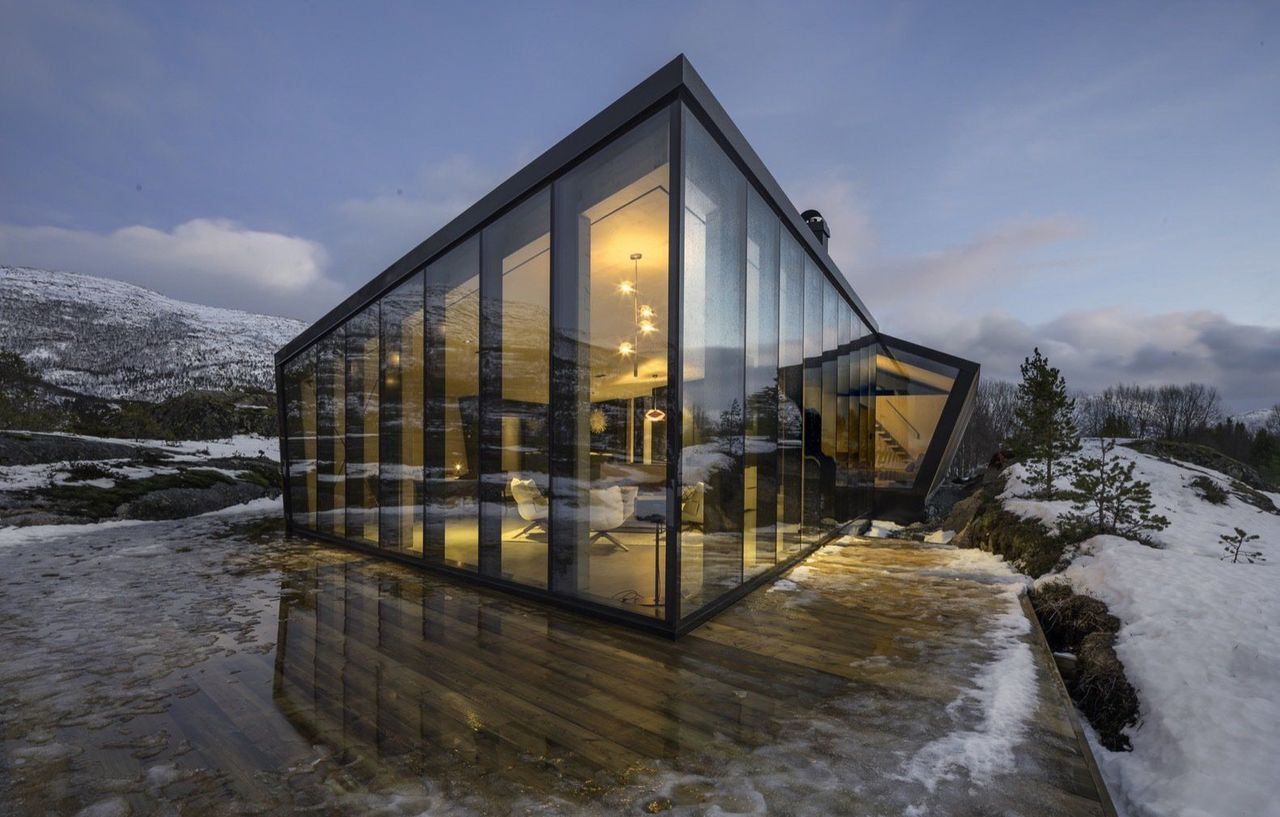 Approximately 14 tons of triple-pane glass was used for the cabin.

Stinessen relied primarily on locally sourced timber to create a warm and inviting atmosphere. Core pine treated with iron sulfate lends an even patina to the exterior cladding, and birch veneer clads the interior. Walls of glass frame breathtaking views of dramatic mountains in the south and the fjord to the west. 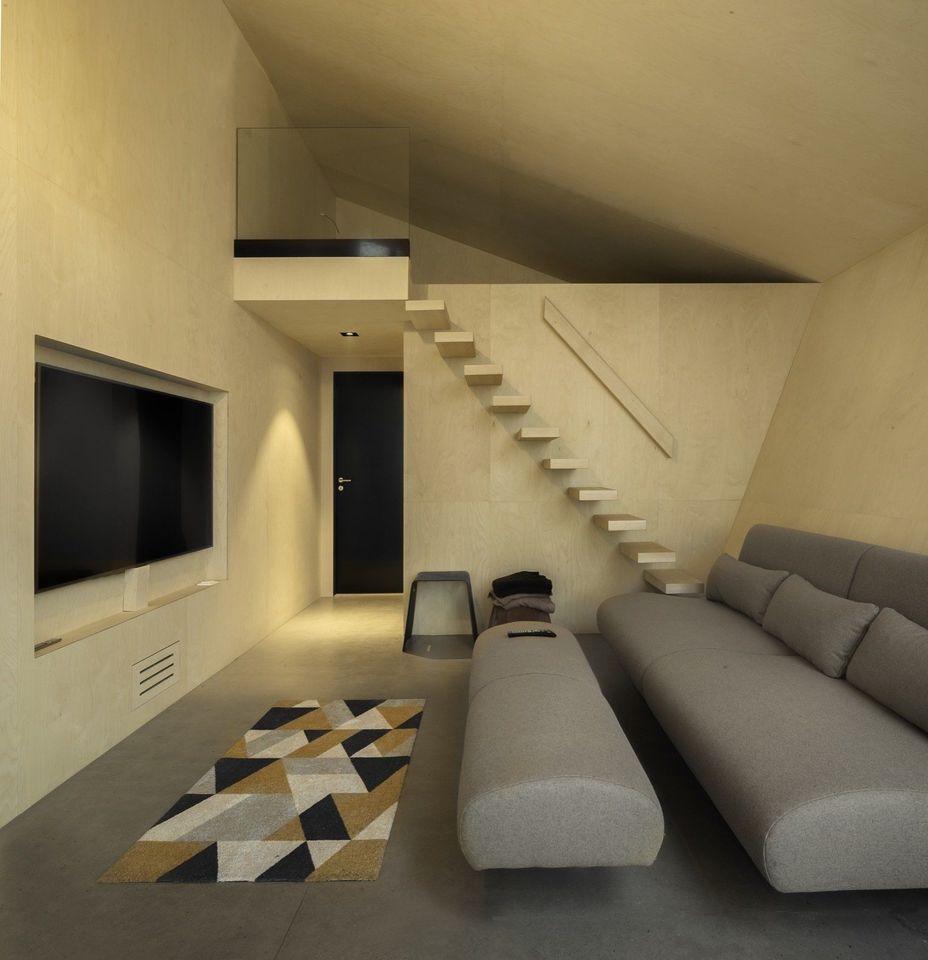 A glimpse of the birch-enveloped family den. In addition to the pictured open-riser stair, there is another set of stairs on the left (not pictured) that lead to the second floor. 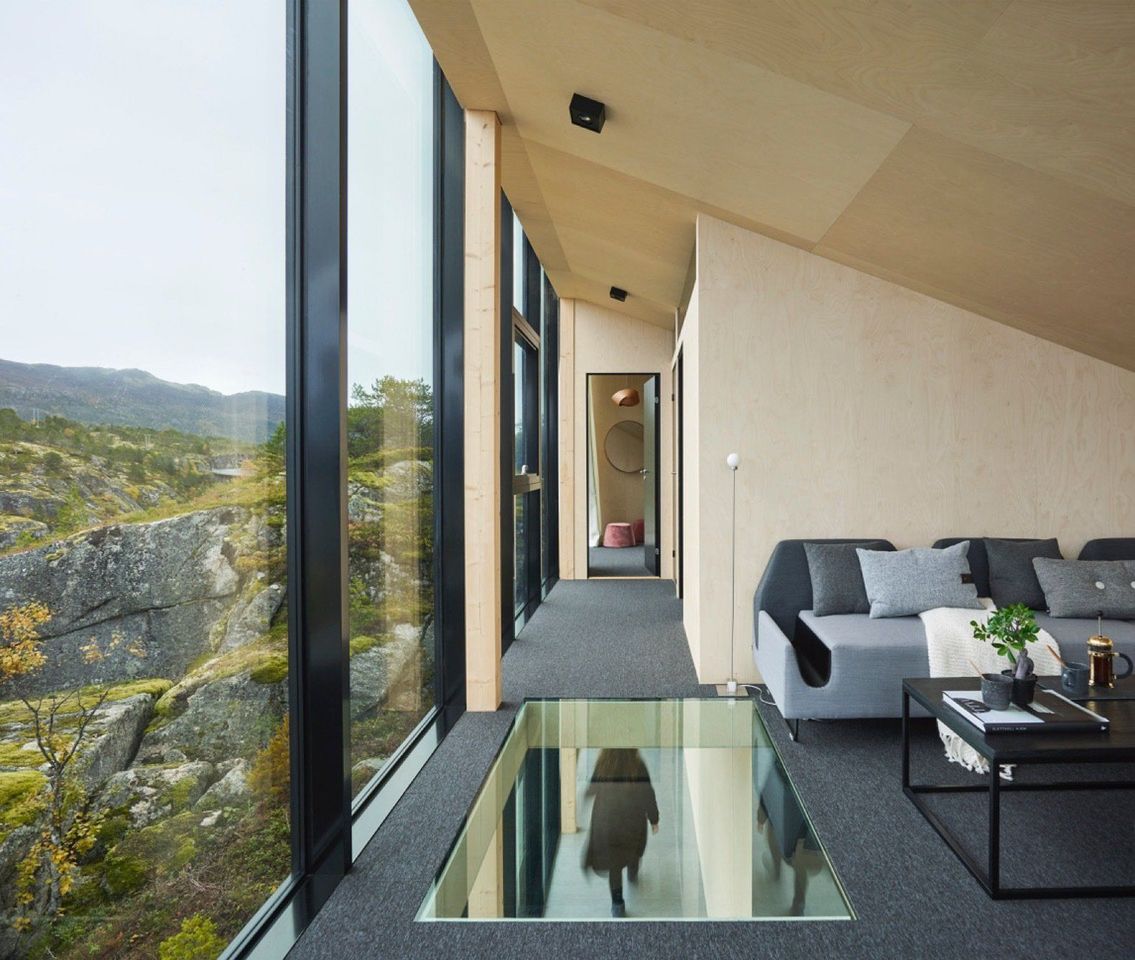 A glass cutout on the floor of the upper level provides a glimpse of the hallway below. 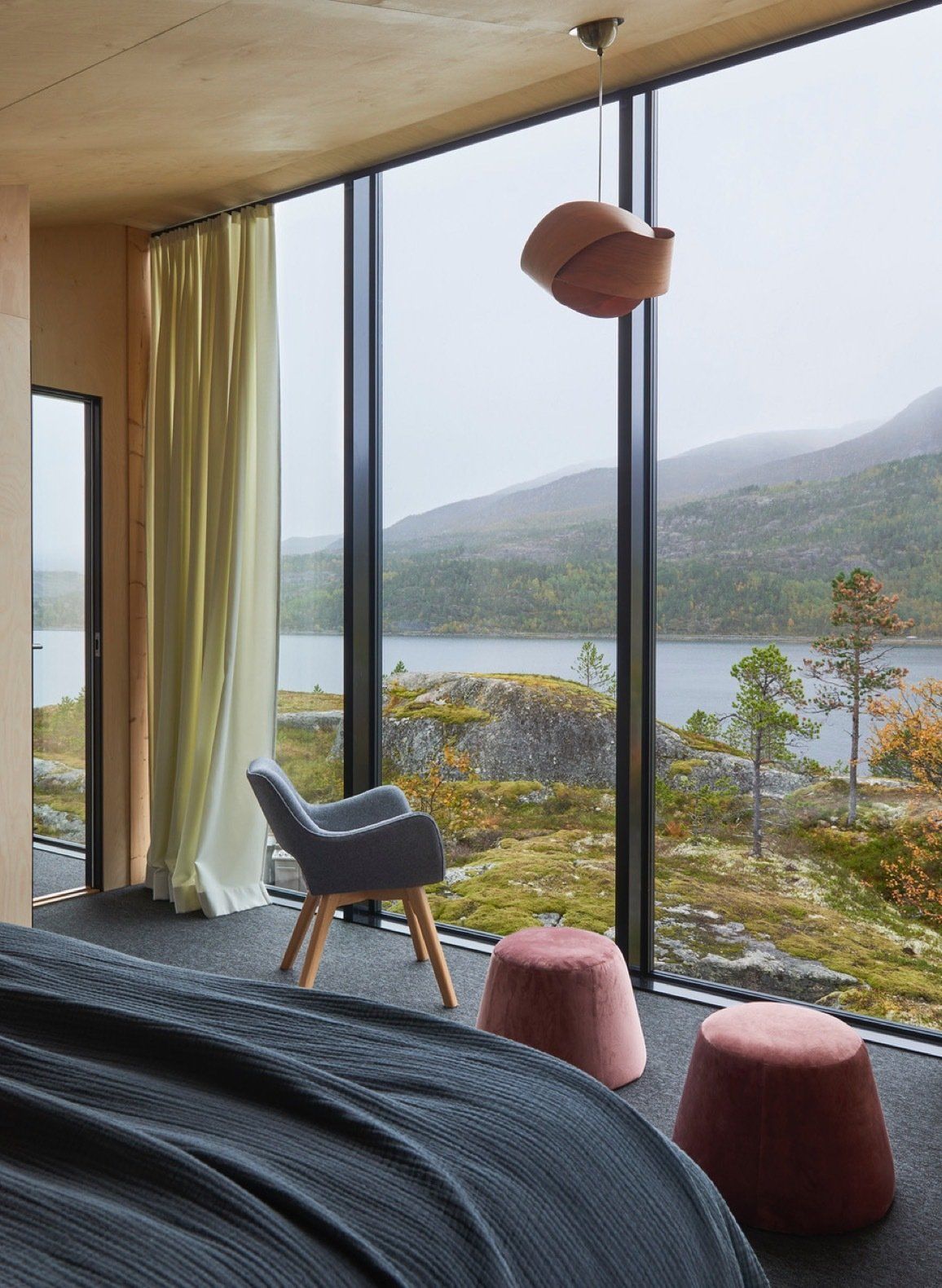 The master bedroom features spectacular views of the fjord.

Asked about his favorite aspect of the project, Stinessen says: "It must be the integration with the landscape, both up close and from a distance."