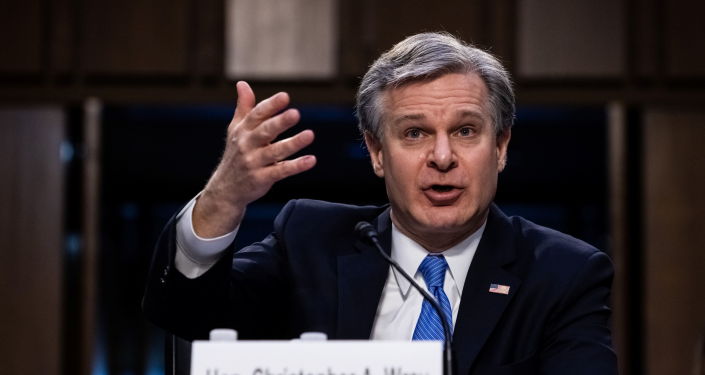 The US has on spurious grounds banned Chinese tech firms for ostensibly placing surveillance backdoors into their technology on behalf of the Chinese government. However, the head of the US’ Federal Bureau of Investigation has revealed the law enforcement agency is pressuring tech firms to do just that.

During testimony to a US Senate panel on Tuesday, FBI Director Christopher Wray said the bureau was working with tech giants and social media companies to monitor and crack down on “extremist” coordination in the wake of the January 6 attack on the US Capitol by supporters of former US President Donald Trump.

“Terrorism moves at the speed of social media,” Wray told the Senate Judiciary Committee, noting social media has become a “major factor” and catalyst for the efficient dissemination of extremist ideas in a decentralized way.

The federal police chief’s Tuesday testimony was his first appearance on Capitol Hill since the events of January 6, when Trump supporters stormed the national legislature and temporarily dispersed Congress in an attempt to reverse the outcome of the November 2020 election, which Trump lost. Four rioters and one Capitol Police officer died in the incident, which ultimately failed at its goal.

In the two months since the assault, the FBI has arrested more than 270 suspects, many on charges that include conspiracy and sedition. However, he noted on Tuesday that despite use of the term and enthusiasm for making it an official crime by many lawmakers, there is no specific charge for “domestic terrorism.” However, Wray did describe some of the insurrectionists as coming to Washington, DC, with “plans and intentions to engage in … domestic terrorism.”

The FBI chief indicated he would "welcome more tools in the toolbox" if lawmakers created such a charge, but noted that so far, his agents have been able to adequately charge suspects using the "tools they have." He further indicated the bureau needs to expand to meet the challenge posed by both left-wing and right-wing "extremists," noting a number of investigations are still underway dating to the nationwide protests against police brutality and white supremacy in the middle of 2020. He, along with many of the senators on the committee, readily equated anti-racist "anarchists" from those protests with the right-wing militia members who spearheaded the Capitol assault last month.

In the aftermath of the attack, social media giants clamped down on sympathetic posts and accounts, with Twitter alone banning 70,000 accounts that promoted the Qanon conspiracy theory that heavily underpinned much of the pro-Trump protests. Trump’s account was also suspended, and similar purges swept across YouTube, Facebook, and other social media platforms, while Parler, the messaging platform used by many of the perpetrators of the Capitol assault to coordinate their plans, was temporarily completely shut down.

However, it wasn’t just Trump supporters who found themselves silenced or punished by the tech giants, as a number of left-wing and independent pages and sites also saw their accounts temporarily shuttered or pages demonetized.

“We try to work with social media companies to get them to more aggressively use their terms” of service to ‘police their own platforms,’” Wray told lawmakers.

Noting the incredible volume of violent rhetoric that appears all across social media, the FBI director said social media companies “play a huge role” in helping the Bureau identify valid threats that “crossed the line” from “aspirational” to “intentional,” helping them to separate wheat from chaff.

However, the partnership with social media goes further. Wray said that the FBI was “not trying to get backdoors” into devices or platforms, but noted that the Bureau has pressured tech firms to put such backdoors into apps, particularly ones that automatically encrypt data, such as Telegram or Signal, to “build in a way to have legal access when confronted with the proper legal authority so that they can get access to information and provide it in response to a warrant or court order.”

“This is a subject that I think the American people need to understand because the decisions that affect the life and blood of Americans all over this country, which normally are made by our elected representatives, are, in effect, getting made in corporate offices in big technology companies,” Wray said.

Wray’s comments effectively mirror those by researchers such as Alex Stamos, the former chief security officer at Facebook who is presently director of the Stanford Internet Observatory, a group that partners closely with the US government to crack down on alternate narratives, which they call “disinformation.”

“The ability to do academic research on what’s happening online has never been worse,” Stamos told Reuters in a July 2019 interview. “What you get is everything encrypted and everything locked up and not available to researchers.”

Stamos has in turn pressured tech giants to hand over user data for “academic” purposes, including backdoor access to user and ad data via API gateways, turning the SIO into what Wired called “his data clearinghouse.”

While multiple lawmakers asked Wray about the FBI’s use of metadata or geolocation data from suspects’ phones or data from their banks on purchases made in DC, Wray refused to confirm or deny the use of those tools in the January 6 investigation, only noting they are “tools in the toolbox” that he “would not be surprised to learn” were being used in certain cases. However, he specifically denied the use of Foreign Intelligence Surveillance Act (FISA) court warrants or national security letters.

A major subject of this signal-to-noise ratio concern has been the report by the FBI’s field office in Norfolk, Virginia, that identified the severe nature of the threat posed by some of the people going to Trump’s “Stop the Steal” rally on January 6 several days beforehand.

Last month, Steven Sund, who was serving as the chief of US Capitol Police during the attack, but resigned afterward, told lawmakers that he did not get the Norfolk report before January 6. The evidence might have been enough to overcome the intransigence from the Senate and House sergeants-at-arms and from the Pentagon in the fact of repeated requests for National Guard support in the days leading up to January 6, as well as during the attack itself. As Sputnik has reported, the “optics” of having US troops fighting US citizens in the shadow of the national legislature was repeatedly cited as justification for their hesitation.

Wray told lawmakers Tuesday that the Norfolk report, which warned people going to Washington intended to wage “war,” was viewed as “unverified information” at the time and not immediately obviously accurate. He noted how the agency struggles to separate signal from noise, as well as telling which violent rhetoric online is “aspirational” versus “intentional.”