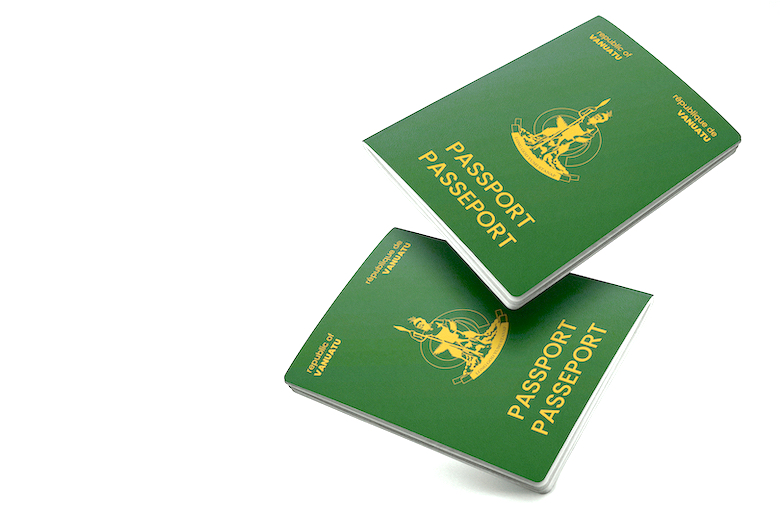 A controversial “golden passports” scheme run by the Pacific nation of Vanuatu saw more than 2,000 people, including a slew of disgraced businesspeople and individuals sought by police in countries all over the world, purchase citizenship in 2020 – and with it visa-free access to the EU and UK, the Guardian can reveal.

Among those granted citizenship were a Syrian businessman with US sanctions against his businesses, a suspected North Korean politician, an Italian businessman accused of extorting the Vatican, a former member of a notorious Australian motorcycle gang, and South African brothers accused of a $3.6bn cryptocurrency heist.

The passport scheme allows foreign nationals to purchase citizenship for US$130,000 in a process that typically takes just over a month – all without ever setting foot in the country.

Marketed by agencies as one of the fastest, cheapest and most lax “golden passport” schemes anywhere in the world, the program grants unfettered, visa-free access to 130 countries including the UK and EU nations. Vanuatu also operates as a tax haven, with no income, corporate or wealth tax.

Experts have warned the scheme is ripe for exploitation, creating a back door for access to the EU and UK and allowing transnational criminal syndicates to establish a base in the Pacific, and Vanuatu’s taxation laws make the country an attractive site for money laundering.

A path to new identities

The passports program, which netted the Vanuatu government more than US$116m last year, has been highly controversial since its relaunch in 2017.

But until now, knowledge of who has bought passports through the scheme has been murky.

A series of internal government documents obtained by the Guardian via the country’s freedom of information scheme, details the name and nationality of every recipient of a Vanuatu passport through the country’s development support program and Vanuatu contribution program in 2020 and January 2021.

After a months-long investigation, involving searching publicly available court records, electoral rolls, death records, social media trails, and discussions with police and sources from around the world, the Guardian has been able to confirm the identities of dozens of the individuals on the list.

Vanuatu issued roughly 2,200 passports in 2020 through these programs – more than half (around 1,200) were to Chinese nationals. After Chinese, the most common nationality of recipients was Nigerian, Russian, Lebanese, Iranian, Libyan, Syrian and Afghan. Twenty people from the US, six Australians and a handful of people from Europe were also among those who applied.

The citizenship-by-investment (CBI) scheme is not illegal and many countries around the world offer CBI programs. There are many legitimate reasons for applying, including improved freedom of movement or tax-free offshore banking privileges.

However, security experts warn that the ease with which people can buy passports from the country, as well as the travel it permits, could make it an attractive scheme for members of transnational criminal syndicates, allowing them a legitimate base in the Pacific.

“It’s not just that they can travel through the EU or set up businesses … one of the issues is being able to create these networks to the Pacific, especially as the Pacific becomes more of a trafficking hub for drugs,” said Jose Sousa-Santos, a Pacific policy fellow at the Australian Pacific Security College. “And Vanuatu’s tax semi-haven laws make it very attractive for money laundering.”

The Guardian has found that a number of Vanuatu applicants are heavily implicated in a complex web of offshore business, with some owning shell companies with no discernible business activity.

Sousa-Santos added that another potential danger was people obtaining Vanuatu citizenship and then legally changing their name in Vanuatu, which effectively gave them a new identity.

“It’s one of the real risks,” he said. “If you are somebody who is a person of interest and who was able to somehow clear the Vanuatu Financial Intelligence Unit process, once you have Vanuatu citizenship, you’re able to change your name and, of course, be able to enter countries where your criminal background would not allow you to.”

In one brochure advertising the scheme by a registered agent, the agency answers a question about whether passport recipients can change their name. “Once you are granted citizenship, you can change your name by sending us a letter that explains your motivation to change your name and your passport will be issued with your new name,” the agency said.