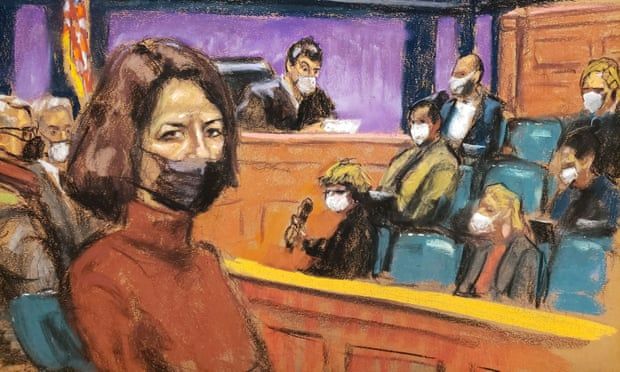 Maxwell, 60, was arrested in July 2020, charged with involvement in ex-boyfriend Jeffrey Epstein’s sexual abuse of teenage girls, some as young as 14.

Maxwell was found not guilty of one count: enticement of an individual under the age of 17 to travel with intent to engage in illegal sexual activity. Jurors reached their verdict after 40 hours of deliberations over the course of six days.

Following the guilty verdict, Damian Williams, the Manhattan US Attorney, said in a statement: “A unanimous jury has found Ghislaine Maxwell guilty of one of the worst crimes imaginable – facilitating and participating in the sexual abuse of children. Crimes that she committed with her long-time partner and co-conspirator, Jeffrey Epstein.”

“The road to justice has been far too long. But, today, justice has been done. I want to commend the bravery of the girls – now grown women – who stepped out of the shadows and into the courtroom,” William also said. “Their courage and willingness to face their abuser made this case, and today’s result, possible.”

Epstein, a convicted sex offender and presumed billionaire, counted Prince Andrew and former presidents Bill Clinton and Donald Trump as cronies before killing himself in a New York jail in 2019, about one month after his sex-trafficking arrest.

Prosecutors said that Maxwell “preyed on vulnerable young girls, manipulated them and served them up to be sexually abused” by Epstein. There were four accusers in this case: Jane, Kate and Carolyn, who did not use their full names, and Annie Farmer.

Jane testified that she was 14 in 1994 when Epstein started to sexually abuse her – and that sometimes Maxwell was present during this abuse. At times, Maxwell participated in the abuse, Jane said. “There were hands everywhere,” Jane recalled of an encounter with Epstein and Maxwell. The abuse continued when she was 15 and 16.

Kate testified that she met Maxwell in Paris around 1994, at age 17. Maxwell extended a tea invitation to her London townhouse shortly after they met, and introduced Kate to Epstein at a subsequent meeting.

Several weeks later, Maxwell called Kate, and said: “Jeffrey was meant to get a massage but the massage therapist had canceled. Could I do her a favor and come over … because I had strong hands.”

Kate testified that Maxwell led her upstairs, where Epstein was wearing a robe. Maxwell closed the door, leaving them alone; Epstein initiated sexual contact. Kate saw Epstein a few times annually over the next several years.

Carolyn said that she wound up in Maxwell and Epstein’s orbit around the early 2000s, when she was 14-years-old, at his Palm Beach mansion.

Carolyn said she went to Epstein’s house “over 100 times” from ages 14 to 18, and testified about a physical encounter with Maxwell while setting up a massage table.

“I was getting fully nude, and she came in and felt my boobs and my hips and my buttocks and said … that I had a great body for Mr Epstein and his friends. She just said that I had a good body type,” Carolyn said.

Annie Farmer, the only accuser to testify under her full name rather than a pseudonym or first name, testified that Maxwell gave her a nude massage when she was only 16 at Epstein’s New Mexico ranch.

Farmer met Epstein in late 1995, when she traveled to visit her sister, Maria, in New York City. Maria worked as a fine art painter for Epstein.

In spring 1996, her mother informed the teen that she would be traveling to Epstein’s ranch, believing it was an educational retreat for high school students.

Annie didn’t want to go – Epstein had touched her hand when they went to a movie in New York – but felt better knowing a woman, Maxwell, would be there.

“She said to get undressed and get [under] the sheet on the massage table, and I did,” Annie said, saying a table was set up in the room where she was staying. “She pulled the sheet down and exposed my breasts, and started rubbing on my chest and on my upper breast.”
#Donald Trump