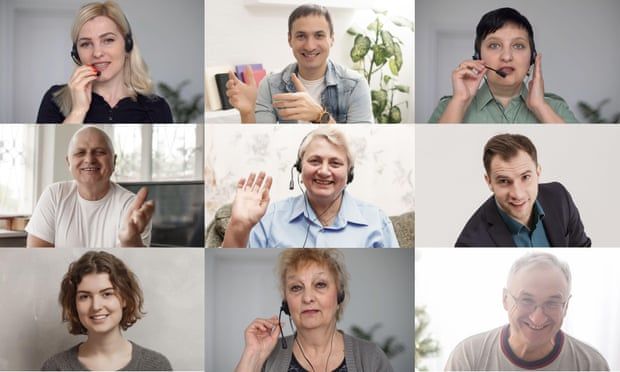 ‘I believe it’s a mental health issue’: the rise of Zoom dysmorphia

The phenomenon has been nicknamed “Zoom dysmorphia” by the dermatologist and Harvard Medical School professor Dr Shadi Kourosh, who has noticed an increase in appointment requests for appearance-related issues during the pandemic.

“I was concerned that the time spent on these cameras was negatively affecting people’s perceptions of their appearance,” she says. Kourosh likens the video conference via phone camera to a “funhouse mirror” because, she says: “[People] are not looking at a true reflection of themselves. They don’t realise it is a distorted mirror.” She says factors such as the angle and how close we are to the camera mask how we really look.

At the start of the pandemic, Kourosh noticed a strange pattern in the types of consultations she was getting. “People were clamouring to get into cosmetic surgeries during a time when people were being encouraged to not take any unnecessary medical risks,” she says. “The preoccupation with how people felt they looked was unusual.”

She noted there had been a spike in specific requests for nose jobs and smoothing out forehead wrinkles. And the more Kourosh looked into it the more she wondered in what ways these could be connected to time spent video conferencing. “People were complaining about sagging skin in the lower face and neck. We wondered if that was because people were holding their smartphones at odd angles when they were looking down,” she says. In March of this year, British plastic surgeons reported a 70% increase in consultations.

Kourosh and her team looked more deeply into how cameras on computers and the front-facing type on phones, can distort images. “When you take a photograph at close range you are more at danger of distorting the image,” she explains. “With a front-facing camera, we found that image distortion is worse the closer we are and we tend to take selfies and sit at our laptops at close range.”

And while Snapchat dysmorphia (selfie filters leading to a rise in botox usage) has existed since 2015 and is connected to so-called “alien face” (big eyes, abnormally raised cheek bones), Zoom dysmorphia is different in a key way. “[With snapchat dysmorphia] patients would come in to the see the cosmetic consultant with a photo of themselves that would be heavily filtered, [yet] there’s an awareness on the patient’s behalf that there’s some dysmorphia going on,” says Kourosh. “But with Zoom dysmorphia it’s unconscious. People don’t know about the distortion that is happening with their cameras.”

She says lockdown created a “perfect storm” of self-image issues. “As well as looking at themselves for video-conferencing calls, people were living in isolation, spending their spare time looking at heavily distorted images of other people on social media. I believe it’s a mental health issue.”