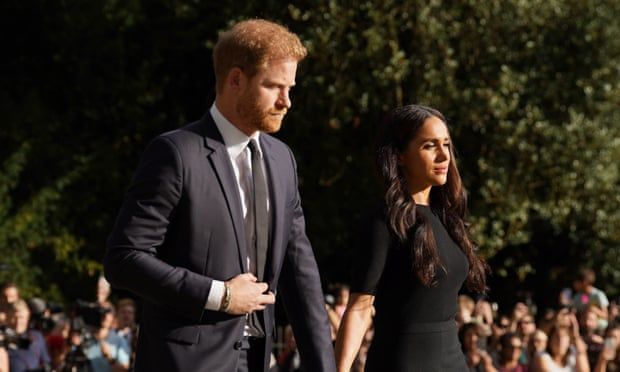 If Harry and Meghan were hoping to change the royal family, they’ll be disappointed

Monarchists already know of their woes while republicans will merely have their views confirmed. And the soap opera will go on
So this is what snowbound, strike-hit Britain needed on a Thursday morning: a rich and entitled couple living in agreeable circumstances in California bemoaning their treatment by the media, the royal family, courtiers, a woman in the crowd in Liverpool, Meghan’s father and even the Queen by implication. Assailed by “them” and “they”.

Yes, it’s the Harry’n’Meghan show on Netflix again, another two and a half hours in which the Duke and Duchess of Sussex back resentfully into the limelight to reveal once more their truth, complete with home movies of their son Archie and copious intimate photographs showing them intruding on their own privacy.

So, what’s new? Well, on this telling, they have been bullied and harassed out of The Firm they worked so hard for: five engagements in five days during their last week in Britain. And the cottage the Queen gave them in the grounds of Kensington Palace was really rather pokey. They made so many sacrifices for this country.

There are details about the negotiations with the Queen, Charles and William in early 2020, with his big brother shouting at him. They were denied the chance to be part-time royals bowing into and out of their duties. Perhaps that’s true; perhaps The Firm is behind the times on employment law.

They said William’s communications team briefed against them. That may be the case and it wouldn’t be the first time: old-timers remember Charles v Diana: the War of the Waleses and the dark arts of Charles’s communications chief, Mark Bolland, 20 years ago.

But they assign blame a bit too liberally. Some, though far from all, of the coverage of Harry and Meghan in some of the tabloids, particularly their bete noir, the Daily Mail, was pretty hateful – but it should be noted that many of the headlines flashing across the screen in the documentaries are not from the British media, but scandal sheets such as the National Enquirer in the US. The retaliation by Meghan’s friends – “the truth about Meghan” – was also planted, in People magazine.

As a former royal correspondent, albeit from some years ago, I find some elements of what they say jarring. I don’t recognise the “constant briefings” of royal reporters, and stories endlessly planted. I remember it being quite hard to get any information out of the palace and briefings about royal tours. The media picks things up: it quickly discerned that not all was well between the royal brothers, or with Meghan. Should they not have reported that?

So, as the final episode plays out, was it worth it? Will the series alter things for the royals? My feeling is not: monarchists here and around the world already know much of this stuff, and either discount it or tut and move on. Republicans, meanwhile, will merely be confirmed in their view of an outdated, antiquated and out-of-touch institution.

Was it worth it for Harry and Meghan? That depends what they were hoping for. In Britain, Harry’s approval ratings have sunk since he left the country, but it may give them the profile to mine lucrative celebrity elsewhere. He may, if he’s feeling uniquely hard done by, be comforted to see what the British public thought of his great-great-uncle Edward VIII when he abdicated for the woman he loved. The letters written to the palace in 1936, preserved in the National Archives at Kew, are quite as abusive as anything Harry and Meghan endured on social media.

So was it all worth it for Netflix? The streaming giants must be happy that last week’s instalments became its highest viewed documentary premiere and Britain’s most popular TV series of 2022. Presumably there’s a return to be made on that, for them and for the co-producers, the Sussex’s media company, Archewell.

But will there be more happy returns in the future? Have Harry and Meghan got more to say that will drive sales and damage the institution, or have they shot their bolt? That’s the cliffhanger now. The royal soap opera will continue; for all the uncertainties, that’s inevitable. The challenge for the US cast members will be finding ways to stay in it.