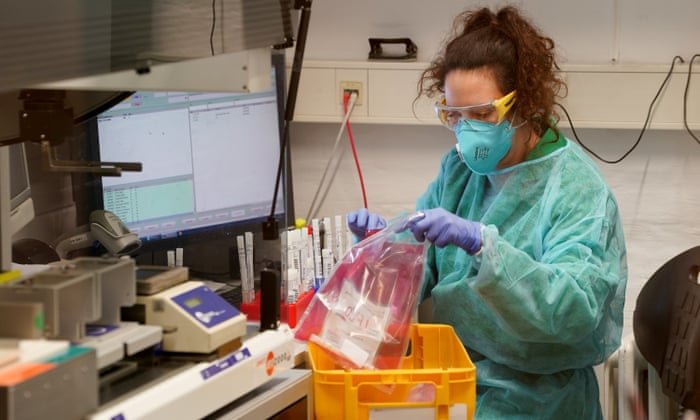 'Immunity passports' could speed up return to work after Covid-19

German researchers studying how lockdown restrictions could be lifted for some people
“Immunity passports” for key workers could be a way of getting people who have had coronavirus back into the workforce more quickly, scientists and politicians in the UK have suggested.

Researchers in Germany are currently preparing a mass study into how many people are already immune to the Covid-19 virus, allowing authorities to eventually issue passes to exclude workers from restrictive measures currently in place.

The study, which is yet to finalise funding, would involve testing the blood of more than 100,000 volunteers for coronavirus antibodies from mid-April. The test would then be repeated at regular intervals on an accumulatively larger sample of the population, to track the pandemic’s progress.

The shadow health secretary, Jonathan Ashworth, said: “Germany appears to be leading the way in the testing and we have much to learn from their approach. I’ve repeatedly called for more testing and contact tracing in the UK, and we should be looking at initiatives like this closely.”

The results of the German study, organised by the government’s public health body, the Robert Koch Institute, the German Centre for Infection Research, the Institute for Virology at Berlin’s Charite hospital and blood donation services, would make it easier to decide when and where schools in the country could reopen, and which people are safe to go back to work.

“Those who are immune could be issued with a kind of vaccination pass that would for example allow them to exempted from restrictions on their activity,” said Gerard Krause, head of epidemiology at the Helmholtz Centre for Infection Research in Braunschweig. The German government has not yet officially commented on the proposal for such a certificate made by scientists.

Dr Philippa Whitford, an SNP MP and former surgeon, said immunity passports could be used specifically for key workers in healthcare in the UK but would be difficult to roll out more widely across the country because of the level of administration needed.

Whitford, who is also chair of the all-party parliamentary group for vaccines, said the length of time someone may have immunity after they have had Covid-19 was still largely unknown. Someone contracting Sars, which is also a coronavirus, did not have long-term immunity – potentially only up to a year after the infection.

Prof Peter Openshaw, a member of the government’s new and emerging respiratory virus threats advisory group, said people who have recovered and test positive for coronavirus antibodies should no longer be infectious themselves and would be expected to have at least some immunity to the virus.

He said the worse case scenario – based on what is known about immunity to coronaviruses that cause common colds – is that former patients would have only partial resistance for about three months.

“It could be that this coronavirus causes a pretty robust immune response, which is durable and protective for much longer, maybe a year or even five years, but we don’t know because it’s a new virus,” he said.

Immunity passports are a “reasonable provisional measure”, Openshaw said, but he stressed that people granted the passports would have to be kept under close observation to ensure they were not becoming reinfected.

“In subsequent monitoring, it would be really important to determine whether those who do return to normal circulation are in fact protected,” he said.

It is unclear whether the millions of antibody tests the government has ordered will be sophisticated enough to reveal the extent of a person’s immunity, rather than simply returning a positive or negative result for circulating antibodies.

Concerns have been raised that wider immunity passport schemes could incentivise certain groups, such as young people who are falling into debt through lack of work, to actively contract the virus in the hope that they can return to their jobs once recovered.

But Openshaw said it would be “highly inadvisable” to breach the government’s lockdown rules and intentionally risk infection.

“Although there are risk factors for severity of illness and admission to intensive care, quite a high proportion who are being admitted are otherwise well and do not have those risk factors,” he said.

“It would be putting your life at risk to try and catch it at the moment. It would be much better to adhere to social distancing and to wait for the vaccine.”