‘In This House’ Yard Signs, and Their Curious Power

How a lawn sign inspired by mom décor became a liberal mantra — and a symbol of a political battle over white womanhood.

There is a sign that has become ubiquitous on the lawns of Democrats who have lawns. “In This House, We Believe,” the sign begins, followed by a stack of progressive maxims listed in capital letters. The classic version reads: “Black Lives Matter / Women’s Rights Are Human Rights / No Human Is Illegal / Science Is Real / Love Is Love.” Then the kicker: “Kindness Is Everything.”

When the yard sign first appeared, in the wake of the 2016 election, I barely noticed it. That era had produced such an exhausting array of ironic paraphernalia (“covfefe” mugs, “Make Donald Drumpf Again” caps, accessories styling Ruth Bader Ginsburg as a rapper) that a placard of earnest liberal word salad hardly registered as a rich text. But over the past five years, as the sign spread across the suburbs, I found myself seduced by its chaotic jumble of typefaces, its lifestyle-blog-adjacent aesthetic, its sanctimonious final line and its curious staying power.

Donald Trump is out of office. I haven’t seen a crocheted fuchsia beanie in years. But nevertheless, this sign has persisted. What began as a symbol of liberal objection to Trump has spawned a whole genre of signs enumerating political and pop-cultural obsessions. Along the way, it has come to represent the lasting psychic imprint of the 2016 election — and the crisis it spawned over the national reputation of white womanhood.

Before the sign was everywhere, it was outside the home of Kristin Garvey, a librarian in Wisconsin. In what she has called a postelection “fog,” Garvey took a Sharpie to poster board, scrawled a range of social-justice slogans into that now-ubiquitous list and planted it in her yard. Soon a photograph of the sign hit Facebook and went viral. With the help of a redesign from a professional artist (who rendered its words in rainbow letters on a black background) and a boost from Pantsuit Nation (the online hive of Hillary Clinton supporters), its message became a mantra among liberals who felt lost in Trump’s America. Mashable called it “more bold and memorable than anything the Democratic party has come up with in the last four years.”

Political yard signs are no longer just election-season events. Conservative counties are rife with signs expressing support for Trump, though he holds no office and is not currently running for anything. And the “In This House” sign has spawned many flattering imitations and absurdist parodies. There are versions for neoliberals, YIMBYs, conservatives, conspiracists, fans of “The Real Housewives of Beverly Hills” and people irked by the triteness of the original sign. In 2017, Garvey’s poster was acquired for the archives of the National Woman’s Party — an organization which had, a century earlier, led the most militant fringe of the American suffrage movement. It’s a remarkable outcome for an artifact born from such a humble tradition: mom-related décor. 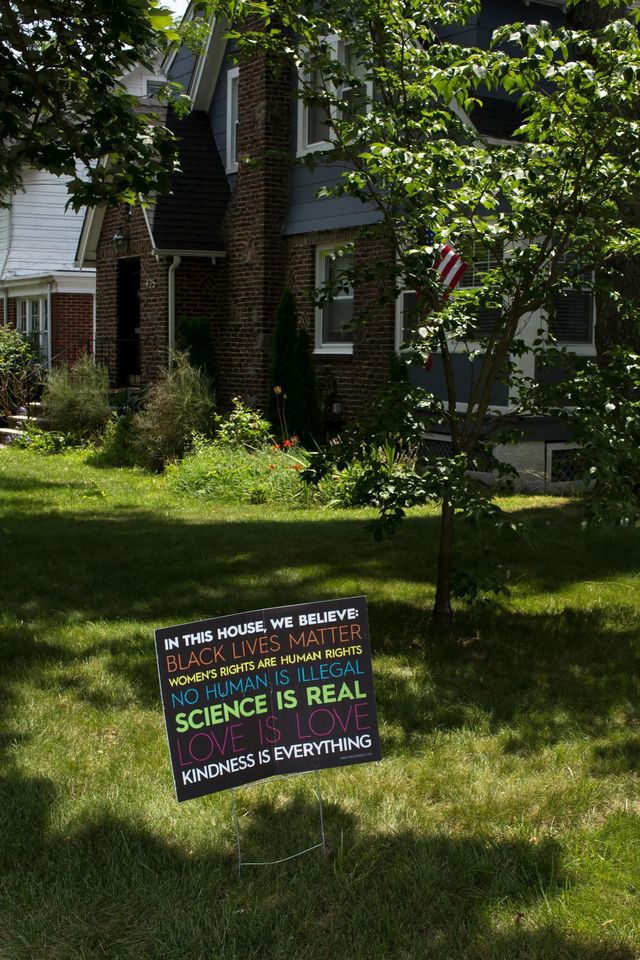 If you have visited a beach town bric-a-brac shop, browsed a farmhouse-style Pinterest board or stayed in a generic Airbnb rental, the “In This House” sign format may be familiar. “In This House,” the sign begins, followed by a list of aphoristic family rules, such as “We Do Hugs,” “We Do Mistakes,” “We Do Loud Really Well” or “We Do Family.” Often the messages are overtly sanctimonious (“We Do Prayer”). Sometimes they end with a saucy twist (“We Cheer for Clemson”). Like other incantations in the momcore canon, the sign is often printed on a purposefully distressed plank in a scramble of fonts — perhaps a gloopy typewriter style punctuated with bursts of spindly cursive. The whole décor category (see also: “Thou Shalt Not Try Me” and “Mama Needs Her Wine”) features a mother character who serves as the fun if beleaguered keeper of her family’s moral compass. Though “In This House, We” is phrased like a disciplinary guide for children, the signs feel directed at the adults in the room, reminding them of their own mission amid the chaos of parenting.

When this genre of sign was translated into a symbol of the #resistance, it left the living room and entered the public sphere. The target audience expanded from the family unit to passing neighbors and total strangers. Now the sign suggested a culture-wide lesson plan, even as its framing (in this house) remained individualistic. It was attuned to meet a particular cultural moment for liberal white women, who were experiencing not just a political crisis but a reputational one.

The typical member of Pantsuit Nation may have felt personally attacked by Trump’s win, but she was also made to feel responsible for it. One of the most memorable signs of the 2017 Women’s March read, “Don’t forget: White women voted for Trump,” punctuated by an ominous scrawl of red marker. Initial exit polls suggested that Trump won more than 50 percent of white women voters, and that figure formed a powerful narrative that implicated the whole demographic. Though it was the overwhelming support of white men that swept Trump into office, it was the ambivalent position of white women that became an object of public fascination. The allegation was that liberal white women had failed, metaphorically speaking, to clean their own house. In 2018, the Pew Research Center released a more solid analysis of the 2016 electorate which determined that 47 percent of white women voted for Trump, edging out the 45 percent for Clinton. However you sliced it, white women were split roughly down the middle, suggesting a tense battle for the soul of the demographic.

A whole #resistance aesthetic arose through which liberals could mark themselves as anti-Trump. (In one ludicrous example, liberal celebrities affixed safety pins to their clothing, signaling that persecuted minorities were safe with them.) It’s not a coincidence that two of the most powerful symbols of this cultural mode — the pink “pussy hat” and the “In This House” sign — came from the traditionally feminine realms of crafting and décor. It was as if a whole proxy war was being fought on the turf of femininity. In March, Carrie Battan chronicled the political tumult that swallowed the knitting website Ravelry, as pussy-hat makers squared off against pro-Trump women with handles like The Deplorable Knitter.

Indeed, crafting has long been used for political ends, slyly subverting the expectation that “women’s work” stay inside the home, and using existing women’s networks, like sewing circles, to foment political action. The abolitionist Sojourner Truth’s most famous portrait shows her posed with a pair of knitting needles and yarn. Suffragists stitched their own radicalized mom signs, like the banner paraded by Minnesota activists that said: “Mother Is the Best Ever / But Not Good Enough to Vote.” But subversive crafts or décor can also represent a retreat, a taming of political energy into calming projects: knitting, coloring on a poster, browsing Etsy for yard decorations.

Buying the official “In This House” sign, at least, directly benefits a specific cause. The license for the design has been gifted to a small Wisconsin reproductive health nonprofit, which collects proceeds from sales through online retailers like Zazzle and CafePress. Beyond this transactional relationship, the sign’s message drives to a perplexingly apolitical conclusion. With its exhaustive list of allied issues, it resembles a multipurpose kitchen gadget — it can chop, it can dice, but often it sits in the drawer unused. Listing all the social-justice slogans together nods to a careful effort at inclusivity, but it also diffuses the sign owner’s perceived responsibility to engage in any particular movement. The kicker, “Kindness Is Everything,” assures the owner that the real key to change lies within. The important thing is that a person be the kind of person who would display the sign.

This is the epitome of virtue signaling: an actual sign enumerating the owner’s virtues. There is something refreshing, actually, about the straightforwardness of that. Whenever I spy one in a window or on a lawn, I feel mildly annoyed and begrudgingly impressed. I can’t look away. It is so effective as a sign that it has become a symbol of signage itself. Parodic versions have flowered in the past few months, and the funniest ones poke fun at the sign’s well-meaning if absurdly ambitious brief by focusing instead on the most trivial of causes — like the version sold by the comedian Joe Mande, extolling the virtues of the 2007 thriller “Michael Clayton.” Though Trump is out of office, the original signs persist, too, suggesting that the underlying cultural battle rages on. This time, according to Pew’s analysis, 53 percent of white women really did vote for Trump.