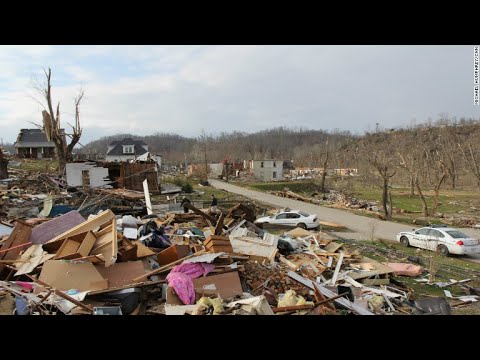 That the tornadoes hit at night when people tend to have more difficulty receiving warnings likely played a role in causing so many fatalities.

"We have entire towns flattened," Beshear said on NBC's "Meet the Press."

"There’s not a camera lens big enough to show the path of absolute destruction," he continued. "People have lost everything."

More than two dozen tornadoes reportedly touched down across six states, which, in addition to Kentucky, included: Arkansas, Illinois, Missouri, Mississippi and Tennessee.

Radar imagery picked up tornado debris — pieces of homes and businesses —lofted to at least 30,000 feet by the extreme winds, and a weather station on the ground near Mayfield, Kentucky, recorded a wind gust of 107 mph at the time the tornado struck.

President Biden on Saturday issued an emergency declaration in Kentucky and ordered federal assistance to support recovery efforts after a tornado tore through the state killing at least 70 people.

Biden spoke with Beshear several times on Saturday, most recently in the evening to get an update on the latest damage assessments and search and rescue efforts.

The president reaffirmed that the federal government will he continue to offer assistance in whatever ways are needed.
Beshear declared a state of emergency on Saturday and activated the Kentucky National Guard to assist with rescue efforts.