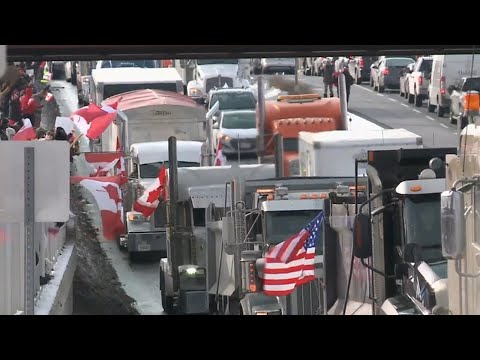 A demonstration that began last weekend in Ottawa not against vaccine mandates but for the freedom to make decisions on peoples own body, expanded on Saturday, and others took place in Toronto and Quebec City. No plans to call in military, yet, says Trudeau.
Thousands of protesters across Canada took to the streets on Saturday for the second weekend in a row, snarling traffic, disrupting business and residential neighborhoods and leading the police to compare the demonstrations to a “siege” on the nation’s democracy.

What began last month with truckers complaining about mandated vaccines for crossing the border from the United States has grown into a catchall movement for a variety of antigovernment causes, laying bare deep resentments within Canada’s political right.

While the police and officials braced for rowdy crowds and potential violence, the atmosphere of the demonstrations by Saturday evening, though boisterous, remained mostly peaceful and festive.

But the police in Ottawa, the capital, admitted they were overwhelmed by the crowds and warned that the noisy and disruptive protests posed a real threat.

“This is a siege. It is something that is different in our democracy than I’ve ever experienced in my life,” said Peter Sloly, chief of the Ottawa Police. “We do not have sufficient resources to adequately and effectively address this situation,” while tending to routine policing, he added.

In Ottawa, despite frigid temperatures, a band performed on the street in front of Parliament Hill underneath a Canadian flag dangling from a large construction crane. Nearby, several inflatable bouncy castles were set up, and makeshift canteens throughout downtown dispensed food.

While there were no serious injuries or uncontrolled violence associated with the demonstrations over the past week, they have nevertheless paralyzed Ottawa’s downtown core with traffic, noise and complaints of harassment.

“I’m receiving hundreds — and I’m not exaggerating — hundreds of emails telling me: ‘I went out to get groceries, I got yelled at, I got harassed. I got followed down the street, I’m so afraid that I can’t go out,’” Catherine McKenney, the city councilor for the area, said Thursday afternoon.

The Ottawa Police said on Twitter on Saturday that they had received 400 calls related to the demonstrations since they began, resulting in 50 investigations and four people being charged.

Throughout the area, many businesses have been closed for days, resulting in tens of millions of dollars in lost sales. Those that have remained open have struggled to enforce provincial mask rules.

About 200 to 250 trucks remained downtown from last Saturday’s demonstration, their drivers frequently honking their air horns. Supporters have been delivering diesel fuel to the truckers, who have stacked firewood in parks and built a small wooden canteen building next to a canal that serves as a popular skating rink in the winter.

Many residents of downtown Ottawa have turned their frustrations on the city’s police for not aggressively shutting down the protests.

Workers blocked some major roads downtown with concrete barriers on Friday as part of a new “surge and contain strategy” that Chief Peter Sloly of the Ottawa Police announced. “The surge will deliver a clear message to the demonstrators: The lawlessness must end,” he said. “Our goal is to end the demonstrations.”

In Toronto, dozens of cars, pickup trucks and heavy trucks were parked along the city’s high-end shopping district downtown by midday, north of the closed-off legislature building area, with sounds of horns and shouts of “freedom” ringing out. Protesters held up signs of the Canadian Charter of Rights and Freedoms and used hockey sticks as flagpoles for Canadian flags and Gadsden flags.

The Toronto Police announced that they had arrested one man for assault with a weapon, and told the public to steer clear of the demonstrations.

Corey Ley, owner of a landscape construction company, drove from his home in Ontario’s Kawartha Lakes region about 85 miles northeast of Toronto to attend Saturday’s demonstration with his wife, two children and two friends. Mr. Ley said they packed plenty of provisions to remain at the site, including food, fuel and water. “I’m here until whenever, as long as it takes,” said Mr. Ley, who said he wanted proof-of-vaccination and mask policies to be optional rather mandated.

In Quebec City, dozens of tractor-trailer cabs were parked two deep for three blocks along one of the major arteries through the downtown area, adjacent to the provincial legislature. Thousands of people lined the sidewalks, cheering on truckers as they arrived or drove past, and a large crowd gathered in front of the legislature, dancing and trying to stay warm as they listened to a series of speakers.

David LeBlanc, a biologist from Matapédia, said it was time for the government to lift pandemic restrictions. “Our children are impacted,” he said. “My son is 18 years old. He could not have a trip with his friends at high school. He could not get in the bar to have fun with his friends.”

Bruno Marchand, the city’s mayor, said on Friday that he had confidence in the police’s ability to keep order, noting that the city deals with 100 protests a year.

“If they have a cause they have to do it respectfully. This is the only way to be listened to and understood,” he told reporters. “Otherwise, police officers will have to do their jobs.”

Truck convoys of varying sizes congregated in protest near provincial legislatures in Saskatchewan, Manitoba and British Columbia. A group of truckers continued to block a border crossing to the United States in Alberta. Counterprotesters laid on streets to block a truck convoy as it entered Vancouver, British Columbia.

Through GoFundMe, some of the organizers of the truck convoy raised 10 million Canadian dollars, about $7.8 million, but the online service has only turned over about 1 million dollars of that. On Friday evening, it said in a statement that after speaking with police, it would not release any more of the money.

“We now have evidence from law enforcement that the previously peaceful demonstration has become an occupation, with police reports of violence and other unlawful activity,” GoFundMe said.
#Vaccines  #vaccine