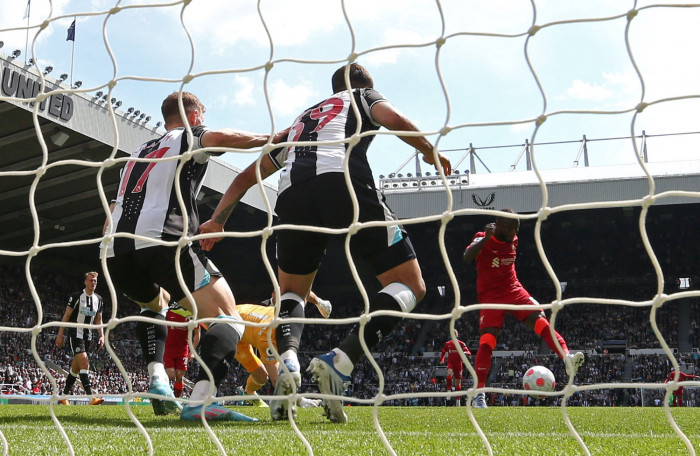 Liverpool hang on for win at Newcastle

The result brought an end to a four-game winning streak by Newcastle, while Liverpool move two points ahead of Manchester City, who travel to Leeds later on Saturday.

With the game sandwiched between two legs of a Champions League semi-final against Villarreal, Liverpool manager Jurgen Klopp made five changes.

The Reds could have made life easier for themselves had Sadio Mane and Diogo Jota not missed big chances to extend Liverpool’s lead.

However, Keita’s controversial goal on 19 minutes was enough to secure three points for the visitors.

Any slip-up by Manchester City, and an unprecedented quadruple of Premier League, Champions League, FA Cup and League Cup would be just seven games away for the Reds.

Klopp gave Liverpool fans even more cause for celebration by extending his contract at Anfield by two years to 2026 on Thursday.

The German was brave with his team selection as he left Mohammed Salah, Thiago Alcantara, Fabinho and Trent Alexander-Arnold on the bench from the side that beat Villarreal 2-0 on Wednesday to put one foot in the Champions League final.

Only Klopp’s men have won more Premier League points in 2022 than Newcastle since the Magpies were able to begin splashing the cash of the Saudi sovereign wealth fund.

Eddie Howe’s men had won their last six home games, but Liverpool showed their strength in depth as even a much-changed team controlled the game.

Three of those brought back into the team had a major role to play in the only goal as James Milner snapped into a tackle on Fabian Schar.

Newcastle were furious no free-kick was given, but as Liverpool played on, Jota found Keita, who kept his cool to round Martin Dubravka and fire into the unguarded net.

Dubravka went on to keep Newcastle in the game as the visitors should have avoided a nervy finale.

The Senegalese then side-footed wide a glorious chance from Joe Gomez’s cross after the break much to Klopp’s dismay.

The German used his considerable quality off the bench sending on Salah, Fabinho and Thiago were introduced in the final quarter in a bid to seal the points.

Chances continued to come and go as Dubravka twice repelled powerful efforts from Jota and flew off his line to smother from Salah.

On the only occasions Newcastle threatened, the offside flag would have come to Liverpool’s rescue in any case.

Miguel Almiron had strayed well beyond the last defender when he found the net in the first-half, while Chris Wood was also offside when he failed to beat Alisson Becker one-on-one.