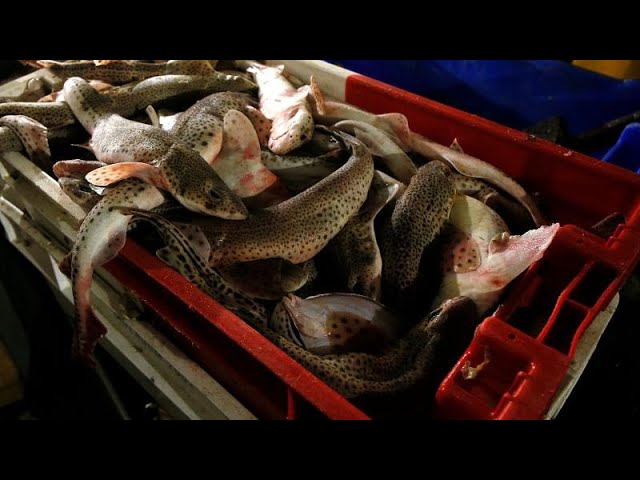 France is demanding more permits to fish in British waters under the UK-EU trade deal, and had threatened to disrupt trade from Tuesday.

Emmanuel Macron says France will not be starting retaliatory action against British trade on Tuesday, in order to allow talks in the post-Brexit fishing dispute to continue. The two countries met with the European Commission on Monday.

France is demanding more permits to fish in British waters under the UK-EU trade deal, and had threatened to bar British fishing boats from its ports and increase checks on UK exports from November 2.

"It's not while we're negotiating that we're going to impose sanctions," the French president told reporters in Glasgow, where he was attending COP26. "We'll see where we are tomorrow (Tuesday) at the end of the day to know if things have fundamentally changed,"

"I've understood that the British were going to come back to us tomorrow with other proposals," he added on Monday evening, describing the next few hours as "important".

The UK government did not immediately comment on Macron's offer, and downplayed the significance of Monday's meeting, saying it was "part of the ongoing, continuing discussions that have been going on for months now.”

“We continue to have discussions with our French counterparts at a number of different levels," said Prime Minister Boris Johnson's spokesman, Max Blain.

UK 'will not roll over'

Earlier in the day, the war of words between the two governments continued, the UK's foreign secretary warning the UK could take legal action against Paris.

“The French need to withdraw those threats otherwise we will use the dispute resolution mechanism in the EU deal to take action," Liz Truss told BBC radio. “We’re simply not going to roll over in the face of these threats.”

“We allocated the fishing licenses completely in line with what is in the trade agreement with the EU and the French need to withdraw those threats,” Truss added.

Dimitri Rogoff, who heads the regional fishing committee on the French coast near Jersey, said French crews have been providing paperwork for 10 months and don’t understand why some boats won permits and others haven’t.

He said he didn’t understand why Britain is making a big deal over “20 or 30 boats,” and that he hoped that the French government’s threats could “incite our British friends to be a bit more conciliatory.”

The past few days have seen both governments talk past rather than to each other, with statements directed primarily at domestic audiences.

On Sunday Macron met with UK Prime Minister Boris Johnson on the sidelines of the G20 summit in Rome. But afterwards they gave contrasting accounts of what was said.

"I don’t want any escalation, but we must take things seriously," the French president said. "My wish is not to go toward retaliation measures...It’s rather to find an agreement."

But the British prime minister described the UK’s position as "unchanged".

"I must say I was puzzled to read a letter from the French prime minister explicitly asking for Britain to be punished for leaving the EU," he said — repeating a reported misinterpretation of what Jean Castex actually wrote, but consistent with a popular pro-Brexit narrative.

Earlier in the day, the Elysée was quick to communicate after the meeting, saying the French president and British prime minister had decided to work towards a rapid "de-escalation" and would seek to bridge gaps.

Both sides would ensure that "practical and operational measures are taken as quickly as possible to avoid a rise in tension", the source added. Differences related to "a few dozen boats", and it was "perfectly possible" to reach a solution.

France called on the UK to "respect the rules of the game" and the terms of the Brexit deal it signed, the Elysée added.

* What are the legal and political risks in the France-UK fishing dispute? View the interview with Steve Peers, Professor of Trade law and EU law at the University of Essex, in the video player above.

But within hours the UK moved to contest the French account, putting the ball firmly in the French court.

"If the French government wants to come forward with proposals for a de-escalation of the threats they have formulated, they will be welcome," a Downing Street official told reporters in Rome.

Sunday morning's meeting was the first between the two leaders since the Australian submarine crisis provoked by the AUKUS deal, and the escalation of post-Brexit tension between Paris and London on other issues too such as fishing and migration.

France's Europe Minister also spoke out on Sunday, Clément Beaune taking to Twitter — "to explain what's going on on fisheries, beyond spin" — in reply to a post the previous day by UK Brexit Minister David Frost.

France had negotiated "patiently and constructively" with the British for months "boat by boat", Beaune said — to no avail.

"We do not lack just a few licences, but more than 40% of French detailed requests. For the EU as a whole, around 90% of the expected licences have been granted, but all the missing ones are French," he tweeted.

On Saturday Frost said the UK wanted to set the record straight on "recent French rhetoric and threats, potentially leading to a breach by the EU of its Treaty obligations".

He added that 98% of fishing licence applications had been granted — a figure contested by Beaune and others, and which refers to the EU as a whole, not France.

Under the Brexit trade deal concluded just before Christmas 2020, EU fishing boats can continue to fish in British waters if they obtain a licence.

But they need to prove that they previously were fishing there — a requirement that smaller French boats, lacking the appropriate technology, have found difficult to fulfil. Many have failed to secure licences from authorities in the UK or the Channel island of Jersey.

France argues the boats are well known to the British authorities and their past records are common knowledge, although some French commentators question their strict rights under the letter of the law.

Paris accuses London of acting in bad faith and of interpreting the Brexit agreement on fishing totally differently to the Northern Ireland Protocol — also part of an international treaty but which the Johnson government wants to rip up.

For the UK, a letter addressed last week by the French prime minister to the European Commission president proves that a greater political dimension is coming into play on the French side.

"It is essential to demonstrate clearly to European public opinion that respect for commitments undertaken is not negotiable and that there is more damage in leaving the Union (EU) than in staying in," Jean Castex wrote in the letter to Ursula von der Leyen.

Tensions over fishing, which have been simmering for months, have electrified post-Brexit fault lines on either side of the English Channel, blowing up into a full-scale dispute that could now flare up still further.

Although it represents only a tiny proportion of each country's wealth, the industry's symbolic importance is seismic. Both sides may have economic reasons to avoid an escalation — but political reasons not to.

France has a presidential election in six months' time and northern France is a key battleground for President Macron. For the British prime minister, the row arguably helps detract from domestic troubles — including the increasingly evident damage done by Brexit.

Both leaders have plenty of support at home to count on. Much of the British press has turned on Macron and his government's attempt to draw the EU into the row.

For many in France, the UK stance only enhances their view of Boris Johnson: that of an opportunist who has embraced nationalist populism for his own ends, a serial liar — and in the words of one commentator on Saturday, a "British Trump".