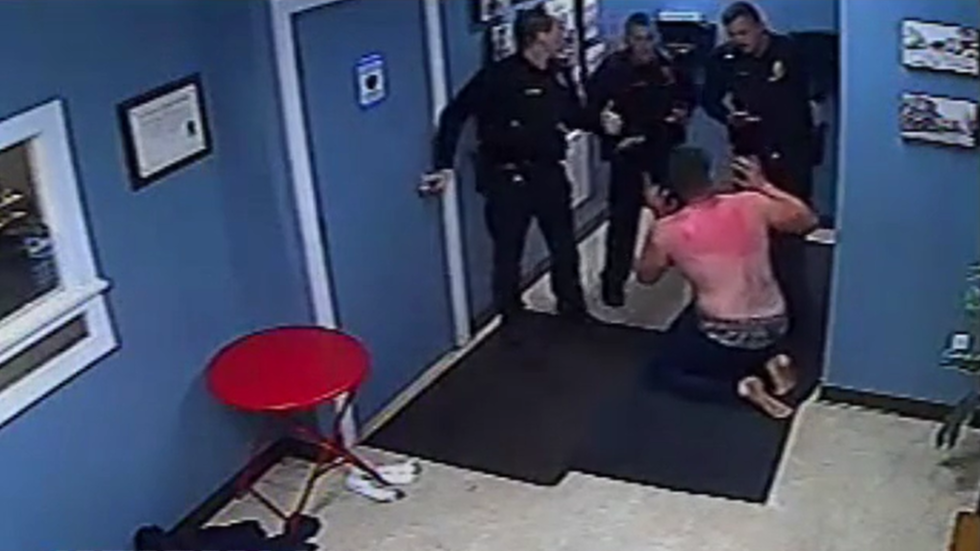 Man bursts into flames after being tasered

A police officer’s stun gun appeared to react with flammable hand sanitizer, which a suspect had doused himself with during an aggressive encounter

The New York Attorney General’s office has released footage of a man who burst into flames after he was tasered by police, as part of its investigation into the man’s eventual death nearly two months after the incident.

In the October 30 surveillance footage released on Friday, 29-year-old Jason Jones could be seen acting aggressively at a police station in Catskill, New York. After staring down two police officers and turning his neck to the side, Jones stripped off his clothing, threw a boot at a table, and shouted at staff.

Jones could then be seen covering his head with hand sanitizer and approaching officers, prompting one officer to fire his Taser. Jones immediately burst into flames as the stun gun appeared to react with the flammable sanitizer, and Jones flailed around with his head on fire as officers retreated into another room.

Jones’ head continued to burn for several seconds before an officer ran out of the room and attempted to assist him, while Jones tried to grab at the officer. Though badly burnt, Jones continued to walk around the room for nearly 20 minutes before medical officials took him away on a hospital stretcher for treatment.

According to the Attorney General’s office, Jones died in hospital on December 15 – nearly two months after the incident. His cause of death has not yet been revealed.

New York Attorney General Letitia James released the footage to the public on Friday “in order to increase transparency and strengthen public trust in these matters,” though she insisted that the release was “not an expression of any opinion as to the guilt or innocence of any party.”