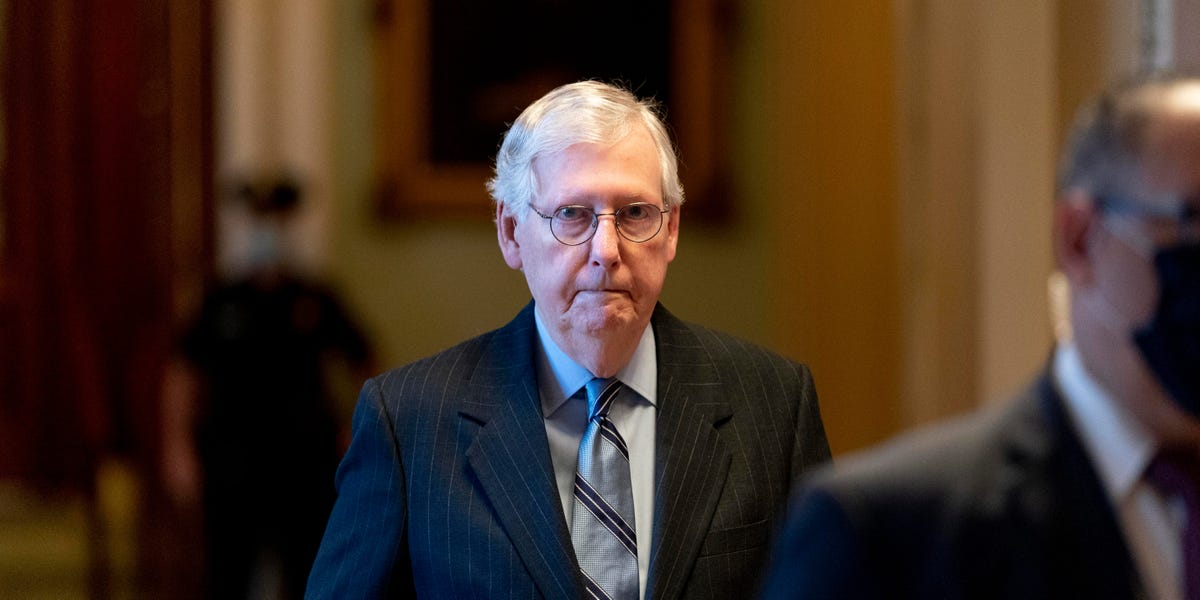 Nancy Pelosi and Chuck Schumer announced they would attach a debt-ceiling suspension to a government-funding bill, daring the GOP. McConnell answered.
As the White House stressed the urgency of raising the debt ceiling to avoid a government default, House Speaker Nancy Pelosi and Senate Majority Leader Chuck Schumer said on Monday that the House would pass legislation to fund the government that includes a debt-limit suspension through the end of next year.

It was a dare to Senate Minority Leader Mitch McConnell, who would need to lend some Republican votes for it to pass the Senate. He was unfazed.

"We will not support legislation that raises the debt limit," McConnell said after Pelosi and Schumer's announcement. "Democrats do not need our help."

Treasury Secretary Janet Yellen told Congress earlier this month that the government's money would likely run out in October because of financial uncertainty caused by the pandemic. Pelosi and Schumer said in a joint statement on Monday that the House would pass legislation before October to fund the government through the end of the year and tack on a debt-ceiling suspension through December "to once again meet our obligations and protect the full faith and credit of the United States."

"Addressing the debt limit is about meeting obligations the government has already made, like the bipartisan emergency COVID relief legislation from December as well as vital payments to Social Security recipients and our veterans," the lawmakers wrote. "Furthermore, as the Administration warned last week, a reckless Republican-forced default could plunge the country into a recession."

Republican lawmakers have said they won't get involved with raising the debt limit and want Democrats to go at it alone, citing their "irresponsible spending" on a $3.5 trillion social-spending bill. By tacking on the debt ceiling to the government-funding legislation, Pelosi and Schumer are daring the GOP to vote for a default.

"The American people expect our Republican colleagues to live up to their responsibilities and make good on the debts they proudly helped incur in the December 2020 '908' COVID package that helped American families and small businesses reeling from the COVID crisis," Pelosi and Schumer wrote, referring to the December stimulus package passed under President Donald Trump.

On Sunday, Pelosi wrote in a letter that every time the debt limit has needed to be raised, "Congress has addressed it in a bipartisan basis." On the same day, Yellen urged Congress to come together to raise the limit, citing the "economic catastrophe" that could result with the failure to do so.
#Donald Trump  #Covid