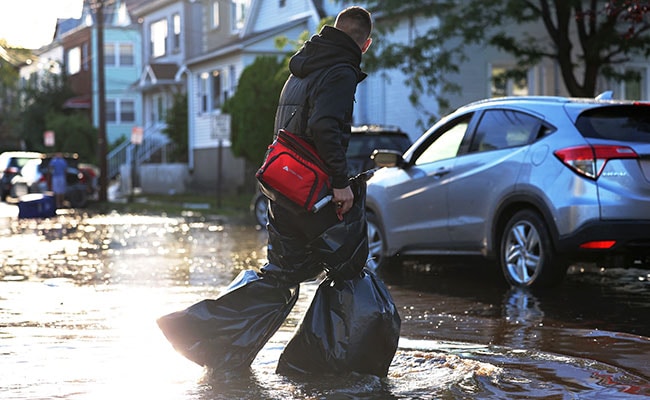 Under piercing blue skies that belied the carnage of just a few hours earlier, shocked residents surveyed the damage of a chaotic night that left at least eight people dead.

New Yorkers mopped up flooded homes and businesses and began removing fallen debris from crushed cars Thursday following record rainfall that caught much of the Big Apple by surprise.

Under piercing blue skies that belied the carnage of just a few hours earlier, shocked residents surveyed the damage of a chaotic night that left at least eight people dead.

"A ten-ton tree just feel on my car. My car's crushed. It's totaled," Jonas Sigle told AFP as he eyed the wreckage outside his home on Manhattan's Upper West Side.

"Wow, this was just unbelievable," said his neighbor, Michael Price.

A short distance away, Metodija Mihajlov inspected the basement of his restaurant, which was flooded with three inches of water late Wednesday.

"When the rain started to get bad my guys called me and we decided to close the restaurant and turn off the electricity and everybody left," he said.

"I've never seen that much rain ever," added the 50-year-old. "It was like living in the jungle, like tropical rain.

"Luckily nothing was damaged. As soon as the rain stopped the water drained away," Mihajlov told AFP.

In Brooklyn, Rebecca Stronger was mopping up water from the basement and first floors of her veterinary clinic.

"We all show up, we all clean and we all get our job done," she told AFP.

Stronger said she expects more storms in the future as the surface layer of oceans warms due to climate change.

"Of course. Everybody knows (about) climate change. The world is exploding on so many different levels. I expect it to happen a lot," she added.

The flooding reignited memories of Hurricane Sandy, a more powerful storm that knocked out power for much of Manhattan and flooded subways in 2012.

Many residents posted videos on social media that showed water cascading down stairs and into apartments.

The New York Police Department said that eight people had died. They were aged between two and 86 and were founded in flooded locations in Queens and The Bronx.

"Our hearts ache for the lives lost in last night's storm," tweeted Mayor de Blasio, who declared a state of emergency, late Wednesday.

"Please keep them and their loved ones in your thoughts today. They were our fellow New Yorkers and to their families, your city will be there for you in the days ahead," he added.