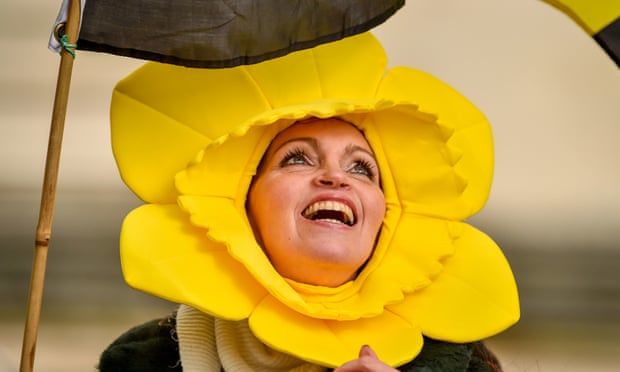 Gwynedd gives workers paid time off despite Westminster's refusal to back plans
For centuries the citizens of Wales have proudly marked St David’s Day with parades, concerts, flag-waving and the wearing of daffodils. But this year the feast of their patron saint will be celebrated with particular gusto by many, after Gwynedd council bosses defied ministers in London and voted to give up to 5,000 of its workers an extra day off.

While Scotland and Northern Ireland designate a bank holiday to celebrating their patron saints, Wales does not, which has long been a source of discontent.

On Tuesday, the council cabinet of Gwynedd, in the north-west of Wales, voted to shut its buildings and wind down its services on 1 March to give as many people as possible the day off.

Cabinet members were scathing of the refusal by the UK government’s Department for Business, Energy and Industrial Strategy, which has responsibility for bank holidays in Wales as well as England, to back the plans on the grounds a day off would disrupt business.

Councillors accused Westminster of treating Welsh people as children, or as the empire’s last colony, and said they were fed up with going “like Oliver Twist” to London to ask for concessions. They complained it was not fair that an extra bank holiday had been granted to mark the Queen’s platinum jubilee but Wales was not allowed to celebrate its patron saint.

The leader of the Plaid Cymru-controlled council, Dyfrig Siencyn, said it was “drawing a line in the sand” and hoped other councils would follow its example. “It’s really offensive and insulting; our masters in London are treating us as little children who cannot make decisions themselves,” he said. “I think it’s another example of how this government is treating us here in Wales. What do we expect from such a government that sees us as the last colony the empire has?”

Another councillor, Nia Jeffreys, said: “The principle behind it is the importance of St David’s Day for us as a nation, how close it is to our hearts. It’s embarrassing that they can give an extra day off willy nilly for the Queen’s jubilee but we can’t decide for ourselves what day we have off.”

Teachers will not get the holiday because their conditions are negotiated centrally. But staff such as social workers, refuse collectors, librarians and cleaners will have a paid holiday, costing the council about £200,000.

Dilwyn Morgan, a councillor, said: “Let us decide what we want to do with St David’s Day. The days of going to a foreign government like Oliver Twist with our empty bowl asking: ‘Please can we have more?’ – those days need to come to an end very soon.”

For councillor Craig ab Iago, the issue was a metaphor for Wales’s relationship with London. “This matter is important to us as a nation,” he said. “It’s a clear part of our culture, history and identity and we want to celebrate it.” He said London’s attitude was “go back to your cage, boys and shut up”, adding: “We deserve better than this; our history is as important as theirs.”

A Welsh government spokesperson said: “We’ve repeatedly asked the UK government for the Senedd to have the powers to make St David’s Day a bank holiday, and it’s disappointing to see these requests continue to be refused.”