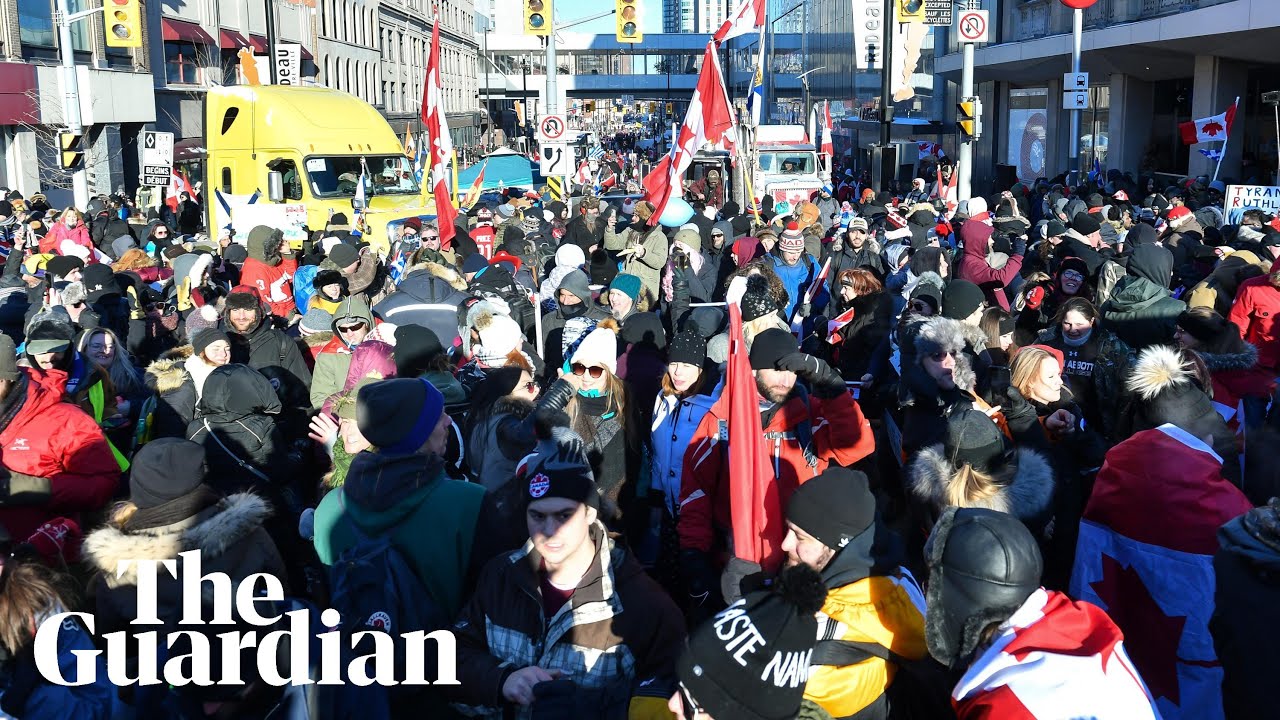 Ottawa protests: how did the rallies for freedom begin and what’s next?

For more than a week, the centre of Canada’s capital city has been paralysed by protestors who have blockaded the downtown area with trucks and cars. City police have described the protest as a “siege” and on Sunday the mayor of Ottawa declared a state of emergency.

How did this begin?

In early January, a relatively unknown group called Canada Unity announced they would be launching a “freedom convoy” to protest vaccine passports and mandates installed by various levels of government in Canada. This group has unsuccessfully tried to launch such a convoy before, but this time, things took off thanks to frustration with a new requirement that all truckers crossing the US-Canada border must be vaccinated against 1Covid1-19.

While the vast majority of Canadian truckers are vaccinated, there were fears that forcing any number of truckers off the job could worsen supply chain pressures.

Some trucks travelled more than 5,000km to reach Ottawa, where the convoy started to arrive on January 28.

What have the protestors been doing?

After pulling into Ottawa, the convoy has morphed into a rolling protest in Ottawa’s downtown core. Trucks and cars roamed through the city, laying on their horns and snarling traffic. Bands of protesters wandered the city, many pushing their way into malls and businesses – maskless, despite a provincial requirement that face coverings be worn indoors.

The size of the protest swelled to roughly 10,000 over its initial weekend, but declined significantly and last week, the protest became an occupation. More than 100 trucks sat parked on the main thoroughfare in front of Canada’s parliament buildings. Protesters built a makeshift kitchen and a well-coordinated delivery network brought in hundreds of jerry cans of diesel to those running low on fuel.

While there are certainly some members of the convoy who are in Ottawa to protest the trucker vaccine mandate, convoy members raise a varied list of complaints.

Canada Unity, which operates as an umbrella organization for many of the protesters, is collecting signatures for its “memorandum of understanding”, a document that demands the Canadian government rescind all vaccine requirements or “RESIGN their lawful positions of authority immediately”.

The group’s founder, James Bauder – who has written on Facebook that Canada’s prime minister, Justin Trudeau, ought to be tried for treason, and who has endorsed the baseless QAnon conspiracy theory – insists that, should the document get enough signatures, an election will be triggered.

Joining Canada Unity is a motley crew of anti-vaccine and rightwing activists. Tamara Lich, who has coordinated a wildly successful GoFundMe, and Pat King, who has coordinated with many of the truckers, were involved in efforts to declare the oil-rich Western provinces’ independence from Canada.

Others who have latched on to the movement include QAnon figure Romana Didulo, the self-proclaimed “Queen of Canada”.

Speakers and protesters have rejected the science behind vaccines, called for Trudeau’s arrest and trial, and waved Nazi and confederate flags.

What do they want?

The protesters say they will not leave Ottawa until all vaccine requirements and mandates have been abolished, a demand that is very unlikely to be met. Some have gone further and said they will camp out until Trudeau leaves office.

The truckers have become a cause celebre for anti-vaccine groups and rightwing influencers. Their cause has been heralded by Elon Musk, Donald Trump, Tucker Carlson, and a host of others.

Bauder’s memorandum of understanding has now collected about 300,000 signatures, while the occupiers’ GoFundMe surpassed CAD$10m ($7.88m USD) – of that, CAD$1m was released to cover expenses, while the remainder was returned to the donors after GoFundMe determined the protest violated their terms of service. That decision led Florida’s governor, Ron Desantis, to pledge an investigation of the company for alleged “fraud”.

Other fundraisers have quickly made up the difference: another crowdfunding effort pulled in nearly CAD$500,000, while a Bitcoin fundraiser has already raised nearly 9 BTC ($389,955).

The Canadian public has been less supportive. Polling data suggests that roughly a third of the country has a positive impression of the truckers, but that number seems to be falling as the occupation wears on. Canada has one of the world’s highest rates of vaccination against 1Covid1-19, and vaccine mandates remain broadly popular.

Ottawa residents are growing particularly hostile and resentful after days of disruption. A class action lawsuit has been filed, seeking damages of nearly CAD$10m over the incessant horn blaring that has disrupted daily life for the thousands of residents who live near the occupation zone.

What are the police doing?

Ottawa police have called in backup from other police forces around the province, but the chief, Peter Sloly, has confessed that they are woefully outnumbered. While the crowd numbers may not be terribly impressive, they have a physical advantage thanks to their vehicles.

Police have increasingly laid fines and charges for mischief, and recently began blocking fuel deliveries to the occupiers – but it hasn’t broken the occupation yet.

How does this end?

There’s little chance that the Trudeau government will acquiesce to the protesters’ demands – indeed, most of the vaccine requirements are administered at the provincial level, outside federal jurisdiction.

Ottawa’s mayor, Jim Watson, is encouraging the federal government to appoint a mediator to find common ground with the protesters, but given their extreme demands, a compromise seems unlikely.

Ottawa police are unlikely to clear the occupation by force. They may begin laying more fines against the occupiers – but their impressive fundraising haul means they can withstand significant financial penalties.

Morale in the encampment has only been boosted by solidarity convoys to provincial capitals in Toronto and Quebec City, and planned convoys across the United States, Europe and Australia.