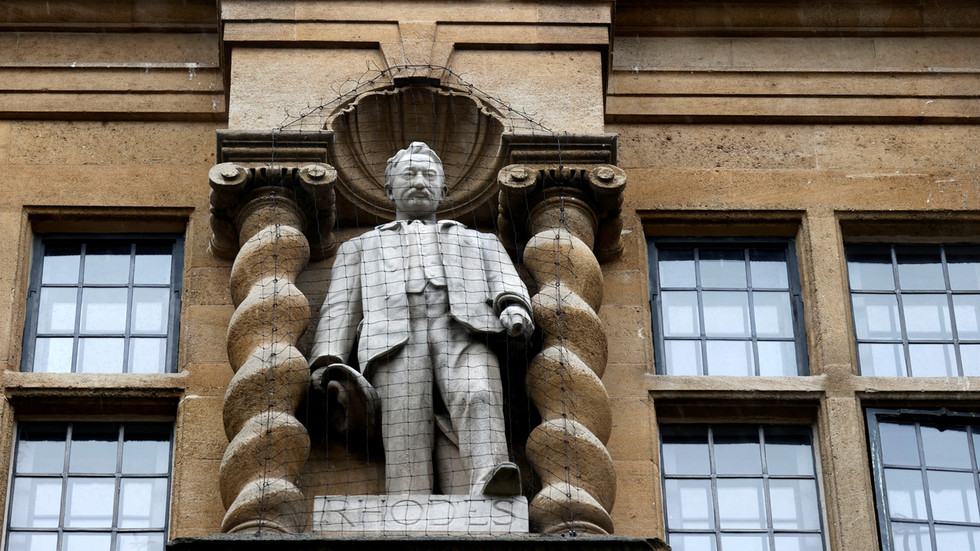 A new plaque has been unveiled at a statue of British colonialist Cecil Rhodes at Oxford University, noting his exploitation of others and how his actions caused "great loss of life," after demands that the monument be taken down.

Last week Oriel College, Oxford erected a plaque for a statue of Cecil Rhodes which sits on the main façade of the college building. The explanatory panel has been added to the statue after its existence came under threat last year during a spate of BLM [Black Lives Matter] protests in which some demanded the monument to the imperialist be torn down.

The plaque read that Rhodes was a "committed British colonialist" who "obtained his fortune through exploitation of minerals, land and peoples of southern Africa. Some of his activities led to great loss of life and attracted criticism in his day and ever since."

It adds that Oriel College had wished for the statue to be removed but on legal advice, they elected to keep the statue. It also notes that the statue became a focus of debate amid the protest movement.

Some commenters have been unimpressed by the plaque, claiming it is neither balanced or measured.

Earlier this year, Oriel received the backing of an independent commission for removing the statue, but the college's governing body decided it should stay, citing it would cost too much and take too long to pull it down.

More than 150 Oxford dons also joined the debate in June, stating that they would not teach Oriel undergraduate students over the college's decision to keep the statue. In response, some said the academics were trying to "blackmail" the college into removing the statue.

To many, Rhodes is the ultimate expression of colonialism. The mining magnate-cum-politician developed a near monopoly of the global diamond trade and also served as prime minister of Cape Colony (a British territory in modern day South Africa) from 1890 to 1896. His British South Africa Company founded the southern African territory of Rhodesia (now Zimbabwe and Zambia), naming it after him.

Rhodes' will also contained instructions for the creation of a scholarship programme from his estate. It is the oldest and perhaps most prestigious graduate scholarship scheme in the world, bringing students from all around the globe to Oxford University. The scholarship was awarded to numerous world leaders in their youth, including former US president Bill Clinton.