Pele or Maradona? Debate Will Continue Raging Over Who Was Greater

Before Lionel Messi and Cristiano Ronaldo came along, the enduring debate in soccer about who was the greatest player centered on two men: Pele and Diego Maradona.

It was an argument that played out for years on terraces and in bars, on radio and on television.

Brazil's Pele, a prolific goal scorer who died aged 82 on Thursday in Sao Paulo, won the World Cup an unprecedented three times as a player in 1958, 1962 and 1970 and put the small town of Santos on the map before conquering the United States with the New York Cosmos.

Maradona, who died at the age of 60 in 2020, guided Argentina to the World Cup in 1986 with perhaps the most influential performance ever at a major tournament and lifted Napoli to unparalleled heights in Italy and Europe.

The argument about whose legacy was greater so divided the football world that when Maradona was voted the player of the 20th century in a FIFA internet poll, there was widespread outrage, with many griping that Pele's earlier career put him at a disadvantage with younger fans.

FIFA held another poll voted on by its own "football family," won by Pele, allowing the pair to share the glory.

"Here Pele, the striker whose territory was the penalty box, a player who scored goals for fun and became Minister of Sport, more your quiet type of person," FIFA wrote at the time.

"There Maradona, possibly the most complete player ever, playmaker and goal-scorer, technically brilliant, unpredictable and impulsive, both on and off the field, a player plagued by a variety of problems for many years." 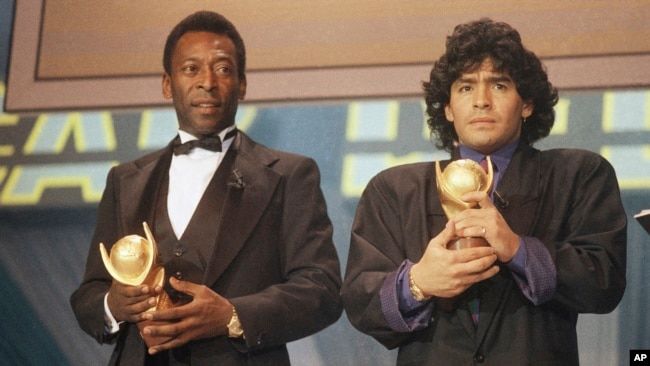 FILE - In this March 1987 photo, Pele, left, and Diego Maradona, hold trophies during an awards ceremony in Italy.
The cases made on both sides came with a host of subtexts: the Argentine versus the Brazilian, the man of the people versus the establishment figure, the party animal versus the quiet man, the rebel versus the conformist.

Everyone took a side, and the two protagonists were not shy about making their own feelings known.

Pele thought Maradona was gauche and undignified, and Maradona thought Pele was a sellout.

"As a player he was great. ... But he thinks politically," Maradona said, in one of his kinder criticisms.

Pele called the Argentine, who struggled with addiction, "a bad example" and much more besides. Football legends Pele, right, and Diego Maradona attend a promotional event on the eve of the opening of the UEFA 2016 European Championship in Paris, June 9, 2016.

Still, the two South Americans got on well when they met for the first time in 1979, Maradona flying to Rio to meet Pele.

Pele was happy to counsel the budding star, and Maradona excited to be fulfilling his dream of meeting the Brazilian.

But their relationship soured in 1982 after Pele criticized Maradona when he was sent off for stamping on a Brazilian in a World Cup tie in Spain.

From then on, they spent decades criticizing each other and then making up, with the praise as sincere as the insults.

Pele was magnanimous on hearing of Maradona's death, saying: "I lost a great friend, and the world lost a legend."

Messi, who strengthened his own claim to sporting immortality by leading Argentina to their third World Cup victory this month, shared a photo of himself with Pele in a terse tribute to the Brazilian star on Instagram, saying: "Rest in peace Pele."

Portugal's Cristiano Ronaldo, eclipsed by Messi at the Qatar World Cup, was more expansive, calling the Brazilian "King Pelé" and an inspiration to millions. "He will never be forgotten, and his memory will last forever in all of us football lovers," he said.